And you thought 2020 was bad! US intelligence department that predicted Covid pandemic in 2017 warns ‘chaotic and volatile’ 2030s will be ravaged by famine and unrest

American intelligence officials have issued a 150-page report containing their predictions for what will happen to the world in the next two decades.

The Global Trends report is published by the US government’s National Intelligence Council, the seventh edition of the document which is issued every four years.

But its predictions, made up to 2040, say that over the next 20 years the global population growth will slow, resulting in an older world; climate change will worsen; international relations will become ‘chaotic and volatile’; and famine will run rife. 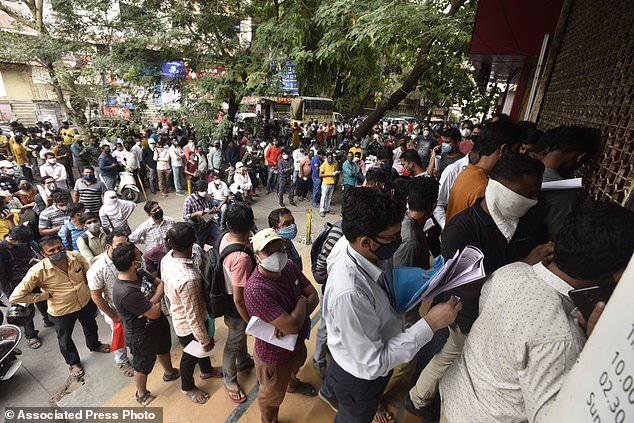 Pictured, people queue up in Pune, India, outside a chemists to get vials of the antiviral drug Remdesevir which has been found to be effective at reducing the risk of death from Covid-19 in seriously ill patients

The last version of the document, published in 2017, imagined there would be a global pandemic in the early 2020s leading to reduced travel to curb its spread.

This prescient prediction appears to have become a reality in the form of Covid-19, which has claimed almost three million lives worldwide.

The document focuses heavily on the impact of the pandemic, calling it the ‘most significant, singular global disruption since World War II, with health, economic, political, and security implications that will ripple for years to come.’

‘COVID-19 has shaken long-held assumptions about resilience and adaptation and created new uncertainties about the economy, governance, geopolitics, and technology,’ the report says.

The document finds cause for concern in virtually all aspects of life.

It warns, for instance, that the effects of climate change are likely to worsen the problem of food and water insecurity in poor countries and hasten global migration.

It also states that although health and education have improved in recent decades it will be hard to maintain such progress because of ‘headwinds’ from the pandemic, an ageing population and ‘potentially slower global economic growth.’

Advances in technology have the potential to address problems including climate change and disease, but can also provoke new tensions, the report says.

‘State and nonstate rivals will vie for leadership and dominance in science and technology with potentially cascading risks and implications for economic, military, and societal security,’ the report says.

The report also warns of eroding trust in government and institutions and of a ‘trust gap’ between the public and the better informed and educated parts of society.

‘The path to pandemics’: UN warns of 1.7m undiscovered viruses in nature – HALF of which could infect humans

There are likely some 1.7 million undiscovered viruses in nature, half of which could spill over to infect humans and trigger new pandemics, UN scientists have warned.

In their report, a team of 22 experts said that unless steps are taken, pandemics will emerge more often, spread faster, kill more people and do more economic damage.

A ‘transformative change’ in the way we deal with infectious diseases — shifting to a preventative stance — will be needed to escape an ‘Era of Pandemics’, they said.

COVID-19 is at least the sixth pandemic to strike since the outbreak of the ‘Spanish flu’ in 1918, which infected a third of the world’s population and killed 20–50 million.

The expert panel was convened by the UN’s Intergovernmental Science-Policy Platform on Biodiversity and Ecosystem Services, or IPBES.

All pandemics to date have had their origins in microbes carried by animals — but their emergence is entirely down to human activities, the report explained.

Almost a third of ‘zoonotic’ diseases that spill over from animals emerge due to the loss of forests increasing the likelihood of close contact between us and wildlife.

And studies have shown that the animals that thrive in the wake of such destruction — like bats and rats — are also the most likely to carry diseases of concern.

Around five diseases cross the species barrier into humans every year, with the report noting ‘any one of which has the potential to spread and become pandemic.’

To inhibit future outbreaks, humanity must cut down on efforts that drive biodiversity loss, such as deforestation, livestock production and wildlife trade, the experts said.

Future, global, Grim, of, OFF, view
You may also like: