What you need to know about lightning safety

A group of scientists has linked the presence of macroscopic dark matter to the appearance of extremely rare “straight” lightning bolts.

In a paper published in the journal Physical Review D, researchers from the University of Toronto and Ohio’s Case Western University said that chunks of dark matter – known as “macros” – that speed through the atmosphere would produce a “straight channel of ionized plasma” that could induce a lightning strike to appear straight “and thus highly distinctive.”

“Macroscopic dark matter (macros) is a broad class of alternative candidates to particle dark matter. These candidates would transfer energy to matter primarily through elastic scattering. A sufficiently large macro passing through the atmosphere would produce a straight channel of ionized plasma,” the group said in March. “If the cross section of the macro is σx⪆6×10−9  cm2, then under atmospheric conditions conducive to lightning (e.g., a thunderstorm) the plasma channel would be sufficient to seed a lightning strike with a single leader.”

Comparatively, they noted that ordinary bolt lightning is comprised of a “sequence of hundreds or thousands of few-meter-long leaders” strung together. 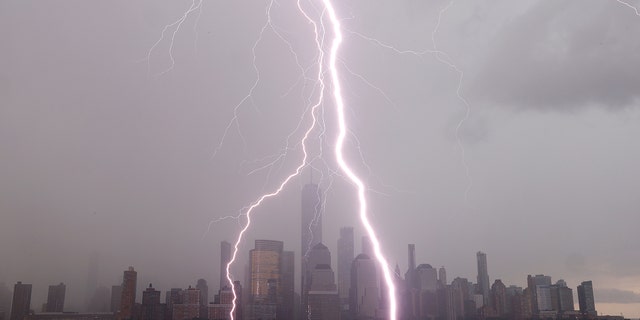 Jersey City, New Jersey – JULY 6: Two lightning bolts frame One World Trade Center as they hit the Hudson River in front of the skyline of lower Manhattan in New York City during a thunderstorm on July 6, 2020 as seen from Jersey City, New Jersey. (Photo by Gary Hershorn/Getty Images)
(Getty)

In addition, the appearance of remarkably rigid macro-induced lightning would not be altered by wind shear or magnetohydrodynamic instabilities.

“The only photographically documented case of a straight lightning bolt is probably not straight enough to have been macro-induced,” they said.

Mostly, dark matter – not to be confused with dark energy – is a mystery, and much more is known about what it is not than what it is.

Dark matter, the agency says, is matter that is dark and not in the form of stars and planets visible to humanity. It is also not in the form of dark clouds of normal particle matter called baryons, not antimatter and not galaxy-sized black holes.

“By fitting a theoretical model of the composition of the universe to the combined set of cosmological observations, scientists have come up with the composition that we described above, ~68% dark energy, ~27% dark matter, ~5% normal matter,” NASA said in a post on the NASA Science website.

According to Smithsonian Magazine, which spoke to the authors of the report on Thursday, the leading theory is that dark matter is made of elementary particles called “weakly interacting massive particles,” or WIMPs. It’s an idea that is contrary to macros, that the publication purports are flying through space at speeds between 150 and 300 miles per second.

“Since these macros are traveling so fast, they’re not really affected by wind — so these ion channels are remarkably straight, cutting directly through the Earth’s atmosphere,” University of Toronto graduate student Nathaniel Starkman told the Smithsonian.

A macro potentially passing through the Earth’s atmosphere would create a straight channel of ions, due to its release of energy and an electrical storm could serve as a conduit for that channel, Starkman and his team argue.

However, if seeing is believing, the scientists have yet to witness this occurrence.

A bolt seen in Zimbabwe in 2015 was close, but not close enough.

Starkman and the researchers are hoping to continue their search, using networks of meteor cameras, examining electrical storms on Jupiter and by instructing people to examine places where macros might have left a mark like a granite slab countertop.