How the ‘Wandering Meatloaf’ Got Its Rock-Hard Teeth

The gumboot chiton is not a glamorous creature. The large, lumpy mollusk creeps along the waters of the Pacific coast, pulling its reddish-brown body up and down the shoreline. It is sometimes known, not unreasonably, as “the wandering meatloaf.” But the chiton’s unassuming body hides an array of tiny but formidable teeth. These teeth, which the creature uses to scrape algae from rocks, are among the hardest materials known to exist in a living organism.

Now, a team of scientists has discovered a surprising ingredient in the chiton’s rock-hard dentition: a rare, iron-based mineral that previously had been found only in actual rocks. Tiny particles of the mineral, which is strong but lightweight, help harden the root of the mollusk’s teeth, the researchers reported in the journal PNAS on Monday.

The discovery could help engineers design new kinds of materials, according to the scientists, who provided proof-of-principle by creating a new chiton-inspired ink for 3-D printers.

A chiton feeds by sweeping its flexible, ribbonlike tongue, known as a radula, along algae-covered rocks. Its ultrahard teeth are arrayed in rows along the soft radula. A long, hollow tube, known as the stylus, anchors each tooth to the radula.

Scientists had previously discovered that the tops of chiton teeth contained an iron ore called magnetite, but knew less about the composition of the stylus. “We knew that there was iron in the upper part of the tooth,” said Linus Stegbauer, a material scientist at the University of Stuttgart, in Germany, and the paper’s first author. “But in the root structure, we had no idea what is going on in there.”

In the new study, the researchers analyzed chiton teeth using a variety of advanced imaging techniques, including several kinds of spectroscopy, which allows scientists to learn about a material’s chemical and physical properties by observing how it interacts with light and other kinds of electromagnetic radiation.

The stylus, they found, contained tiny particles of some kind of iron-based mineral suspended in a softer matrix. (The matrix is made of chitin, the compound that makes up the exoskeletons of insects and crustaceans.)

After further analysis, they were stunned to discover that the mineral particles were santabarbaraite, a mineral that had never been observed in living creatures before. “It was a whole series of surprises, and then they just kept rolling in,” said Derk Joester, the senior author and a material scientist at Northwestern University. 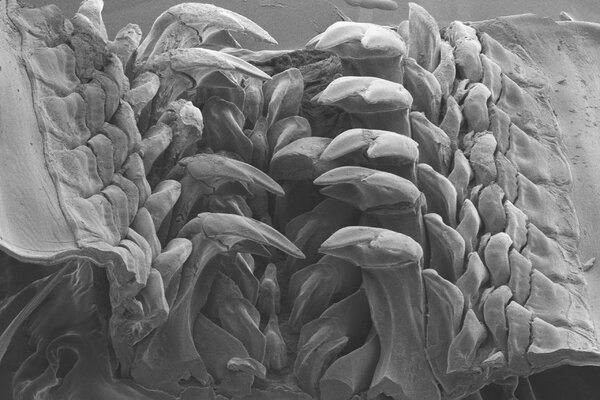 Santabarbaraite is a hard mineral but it contains less iron and more water than magnetite, which makes it less dense. The mineral might allow the chiton to build strong, lightweight teeth while reducing their reliance on iron. “Iron is physiologically a rare material,” Dr. Joester said.

The researchers also discovered that the santabarbaraite particles were not evenly distributed throughout the entire stylus. Instead, they were concentrated at the top, closest to the surface of the tooth, and became sparser at the bottom, where the stylus connected to the soft radula. This pattern of distribution created a gradient, making the stylus stiffer and harder at the top and more pliable at the bottom.

“The organism has enormous spatial control over where the mineral goes,” Dr. Joester said. “And that’s really, I guess, what got us thinking about how this might be used to create materials. If the organism can pattern this, can we do the same?”

The researchers decided to try creating a new 3-D printer “ink” inspired by the chiton tooth. They started with a compound similar to chitin and then added two liquids: one containing iron and one containing phosphate. Mixing the ingredients together yielded a thick paste that was studded with tiny particles of a mineral similar to santabarbaraite. “And then it’s ready to be printed — you can just transfer it into your 3-D printer,” Dr. Stegbauer said.

The ink hardened as it dried, but its final physical properties depended on how much iron and phosphate were added to the mix. The more that was added, the more nanoparticles formed, and the stiffer and harder the final material became. By tweaking the recipe in this way, the researchers could create objects that were as flexible and rubbery as a squid or as stiff and hard as bone.

“It should be possible to mix the ink at a ratio that you can change immediately prior to printing,” Dr. Joester said. “And that would allow you to to change the composition, the amount of nanoparticles, and therefore the strength of the material on the fly. Meaning that you can print materials where the strength changes very dramatically over relatively short distances.”

The technique might be useful in the burgeoning field of soft robotics, allowing engineers to create machines that are hard and stiff in some places and soft and pliable in others, Dr. Joester said: “I think it would be amazing if you could print all of these gradients into the structure.”