Follow
Home » Science » How to Vaccinate a Siberian Reindeer Herder

How to Vaccinate a Siberian Reindeer Herder

The Yamal Peninsula in northwestern Siberia is one of the few remaining places on Earth where a nomadic people retain a traditional culture. On the tundra, the Nenets, an Indigenous minority in the Russian north, follow a lifestyle shaped by the seasonal migrations of the reindeer they herd.

While Covid brought travel to a halt in much of the world, the Nenets of Yamal kept moving. From December to April, the herders deploy their camps and pasture their reindeer in the Nadymski district, a region of some 40,000 square miles at the base of the Yamal Peninsula and centered on the city of Nadym. In mid-April they begin “kaslanie,” a season of nomadism, traveling with their herds some 400 miles up the peninsula and moving camp 30 to 100 times during the year.

But the pandemic has reached even here. More than 100 new cases of the coronavirus are recorded in the region every day, as well as three to five deaths among infected patients.

“We learned about the coronavirus from TV, and most of the sick people were in cities and towns,” Ivan Khudi, a reindeer herder, said. “This trouble probably bypassed us due to our distance from civilization. For example, I have been in ‘self-isolation’ for 61 years, since I was born.” 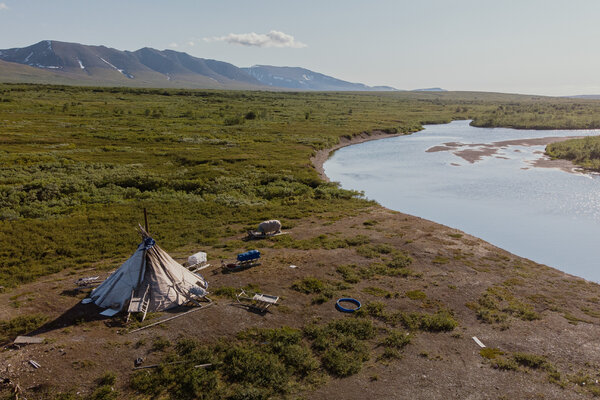 Now vaccination has arrived, too. Many herders pitch their camps — small clusters of chums, traditional tents somewhat resembling Native American tepees and outfitted with electric generators and satellite dishes tuned to Russian TV stations — along the snow-covered highway that runs, with no turns or exits, the 200 miles between Nadym and Salekhard. Medical buses with doctors and nurses move along the highway, stopping at opportune points to vaccinate willing herders. More than 135,000 people in Yamal have been fully vaccinated against the coronavirus, including about 56 percent of eligible adults.

In late February, a vaccination point was set up not far from Mr. Khudi’s camp. The site consisted of several mobile medical units. In one, a medical inspection was being carried out; in others, vaccinations. Nearby, in tarpaulin tents, tundra residents filled out questionnaires and, after being vaccinated, sipped hot tea.

“Will they bring gasoline?” one man asked. Fuel holds tremendous value for nomadic people, and gasoline sales points are sometimes organized nearby. In an area next to the vaccination point, a pediatrician was examining children. Tundra residents don’t often have the opportunity to bring their child to a doctor, so the presence of a pediatrician is a draw as well.

Vaccination is not unfamiliar to the herders. In August 2016, an abnormal heat wave led to an anthrax outbreak in Yamal that killed 2,000 reindeer and one boy, and hospitalized dozens of people. Every March since then, reindeer and people in Yamal are vaccinated against the disease.

Some herders at the Covid vaccination site were cool to the idea of getting the shot. “We live in the tundra,” one man said. “Why do we need this? I brought my wife to the vaccination, but I won’t be vaccinated myself.”

Nevertheless, by day’s end, dozens of people had been vaccinated. In the evening the medics drove back to Nadym, to head out the next day to another point on the tundra highway.

“We are conducting colossal explanatory work among the inhabitants of the tundra,” a nurse from Nadym said. “But there are still many people who are not eager to be vaccinated, and this situation is very difficult to reverse.”