The fossilised remains of a humongous species of marine turtle have been discovered in Spain dating back 83 million years.

The remains belong to an entirely new species, which may have been one of the largest marine turtles to have ever lived.

The species, which researchers from Universitat Autònoma de Barcelona have named Leviathanochelys aenigmatica, had an estimated body length of up to 12.27 feet (3.74 metres).

That’s more than twice the size of the average human! 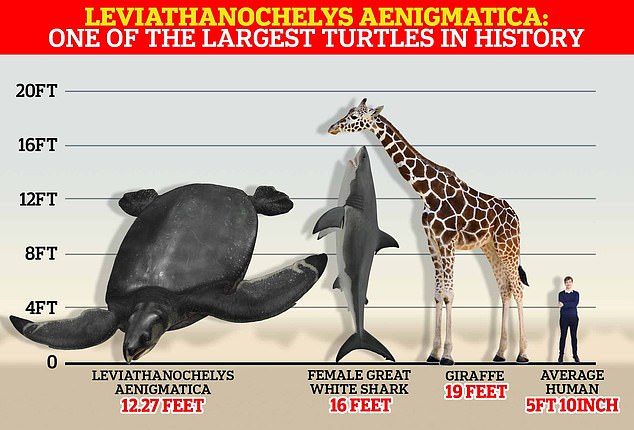 The species, which researchers from Universitat Autònoma de Barcelona have named Leviathanochelys aenigmatica, had an estimated body length of up to 12.27 feet (3.74 metres). That’s more than twice the size of the average human! 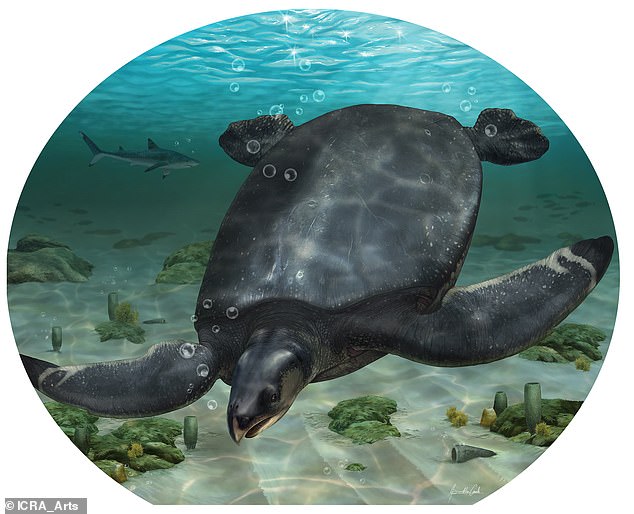 An illustrated reconstruction of Leviathanochelys aenigmatica, one of the largest turtles ever

Key features: Bone protruding forwards from the front of the pelvis

In the study, published in Scientific Reports, the researchers explained the turtle’s name was derived from the ‘Leviathan, in reference to the Biblical marine beast, in allusion to the body size of the new species’, and chelys, which is latinised version of the ancient greek word for female turtle.

Aside from being one of the largest marine turtles found anywhere in the world, Leviathanochelys represents the largest to have been discovered in Europe.

This prehistoric reptile towers over any other of its extinct or living relatives in Europe, with the largest reaching about 4.9 feet (1.5 metres) in length.

However, the Leviathanochelys is significantly smaller than the ancient extinct genus Archelon, which is the largest known marine turtle.

Archelon lived in the seas surrounding the North American continent and grew to a staggering 15.1 feet long (4.6 metres).

It roamed during the late Cretaceous period, which was between 100.5 and 66 million years ago, and could weigh up to 3.2 tonnes.

In their new paper, Àngel H. Luján, Albert Sellés, and colleagues described the remains of the new marine turtle specimen, which were excavated between 2016 and 2021 from the Cal Torrades locality in Northeastern Spain.

The fossils they found consisted of a fragmented, but nearly complete pelvis, along with parts of its carapace, or upper shell.

The creature from the Testudine family dated back to the Campanian Age, between 83.6 to 72.1 million years ago, meaning that it existed around the same time as the Archelon.

However, one distinctive feature that set the Leviathanochelys apart was a bone protruding forwards from the front of the pelvis, which the researchers believe may have been related to the respiratory system.

The presence of this bone suggests that the creature could represent a new taxon of ancient marine turtles. 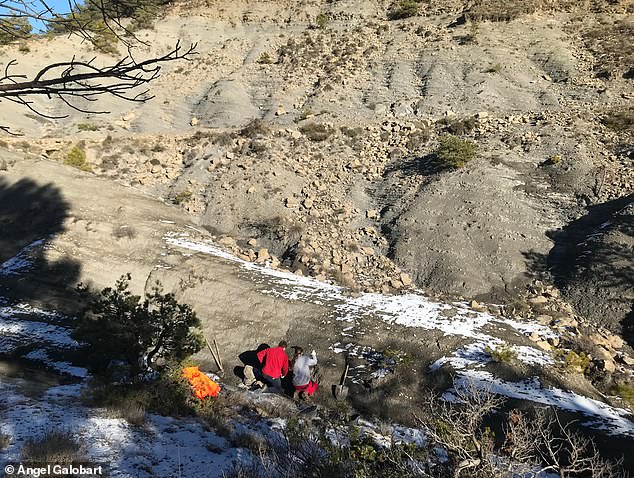 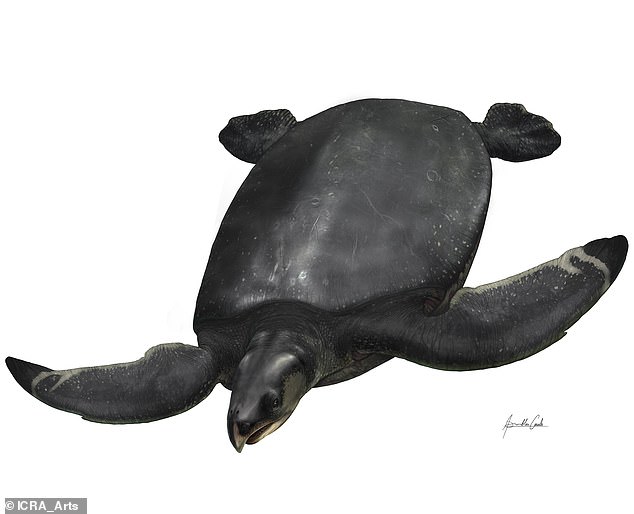 Speaking to MailOnline, Dr Lujan said: ‘The pelvis is the main attachment point of the bones and muscles of the posterior half part of the body.

‘Because of that, the shape of the pelvic gird has a great impact on how the animal will move or live.

‘For instance, the pelvis of Leviathanochely is relatively wider than that of Archelon, which suggests that there is more surface to attach the abdominal muscles.

‘Or in other words, some abdominal muscles of Leviathanochely were proportionally larger than that of Archelon.

‘Furthermore, the new species possess a couple of bony bulges in the anterior side of the pelvis- which we named accessory process- that we speculate that it could serve as an additional ankle point for muscles controlling the abdominal contraction.

‘These muscles could participate in functions related to the respiratory system. For instance, some pelagic animals show a modification in their respiratory system intending to maximize their breathing capacity at high depths.

‘In sum, based on the pelvis morphology we suggest that Leviathanochelys could have a pelagic lifestyle.’

Based on the size of the pelvis, the authors estimated that the turtle may have reached a body length of 12.27 feet.

They also judged that it had a maximum pelvis width of 2.9 feet (88.9 centimetres), which is actually slightly larger than the biggest estimates for Archelon’s best known specimen at 2.66 feet wide (81 cm).

In the study, the authors noted that this discovery ‘sheds a light on the diversity of marine turtles and on how the phenomenon of gigantism in these groups was also occurring in Europe.’

‘Despite the scarcity and fragmentary nature of the individual, the new evidence not only increases the taxonomic diversity of the Late Cretaceous marine turtle biota in Europe, but also opens a new line of exploration and raises new questions,’ they concluded.

WHAT ARE LEATHERBACK TURTLES AND WHAT DO WE KNOW ABOUT THEM?

Leatherback turtles are named for their shell, which is leather-like rather than hard, like other turtles.

They are the largest sea turtle species and also one of the most migratory, crossing both the Atlantic and Pacific Oceans. 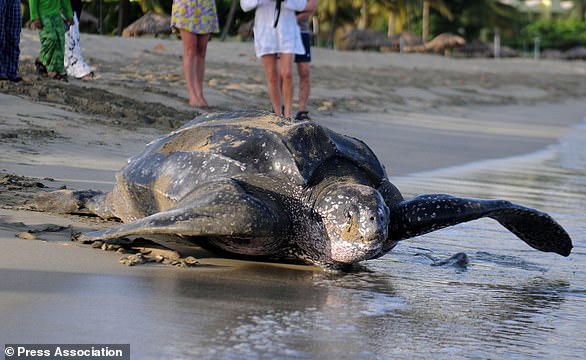 Leatherback turtles (pictured) are named for their shell, which is leather-like rather than hard, like other turtles. They are the largest sea turtle species and also one of the most migratory, crossing both the Atlantic and Pacific Oceans (stock)

Pacific leatherbacks migrate from nesting beaches in the Coral Triangle all the way to the California coast to feed on the abundant jellyfish every summer and fall.

Although their distribution is wide, numbers of leatherback turtles have seriously declined during the last century as a result of intense egg collection and fisheries bycatch.

Globally, leatherback status according to the International Union for Conservation of Nature, leatherbacks are listed as Vulnerable

Many subpopulations – such as in the Pacific and Southwest Atlantic – are Critically Endangered.