Illegal teeth-whitening kits are 'widely available' on eBay and Amazon

Having whiter teeth is something that many of us would love, but a new report may put your off ordering any DIY kits online.

Which? has warned that several illegal teeth-whitening kits containing dangerously high levels of hydrogen peroxide are ‘widely available’ on online marketplaces, including eBay, Amazon and Wish.

Worryingly, 21 of 36 teeth whiteners tested were found to contain illegal levels of hydrogen peroxide, which can burn gums and cause permanent damage to teeth.

In particular, six products were found to contain more than 100 times the legal limit for hydrogen peroxide, five of which were available to buy on AliExpress for as little as 85p per application.

Based on the findings, Which? is calling for online marketplaces to be given greater legal responsibility for the safety of products sold on their sites. 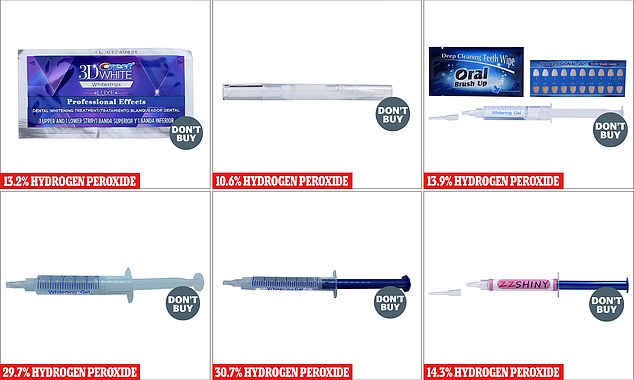 Five of the worst offenders were sold on AliExpress, with the worst one, a ‘Teeth bleaching gel kit’, sold by Oral Orthodontic Materials, found to contain a whopping 30.7 per cent hydrogen peroxide

In the UK, teeth whitening products should legally contain up to 0.1 per cent hydrogen peroxide – a natural bleaching agent.

However, in tests on 36 teeth whiteners available online, Which? found that 21 exceeded these levels.

Sue Davies, Head of Consumer Protection Policy at Which?, said: ‘It’s worrying that our tests have revealed so many of these products sold on online marketplaces – and often hyped on social media – are breaking legal limits for hydrogen peroxide and putting the health of users at risk.

‘It’s clear that self-regulation is not working, leaving people exposed to a flood of unsafe products online.

‘It is absolutely crucial that online marketplaces are given greater legal responsibility for the safety of products sold on their sites, so that shoppers are far better protected from dangerous and illegal items.’

Based on the findings, Which? is urging consumers to seek help from a professional dentist if they are looking to whiten their teeth.

Alternatively, consumers should look to buy teeth whitening kits from reputable high street retailers, according to Which?.

Following the tests, Which? reported the findings to the online retailers, who responded by removing the unsafe products from their platforms.

Speaking to MailOnline, an Amazon spokesperson said: ‘Safety is a top priority at Amazon and we want customers to shop with confidence on our stores.

‘We require all products offered in our store to comply with applicable laws and we monitor the products sold in our stores for product safety concerns.

‘When appropriate, we remove a product from the store, reach out to sellers, manufacturers, and government agencies for additional information, or take other actions.

‘If customers have concerns about an item they’ve purchased, we encourage them to contact our Customer Service directly so we can investigate and take appropriate action. The products in question have been removed.’

a, illegal, Kits, teeth whitening
You may also like: