Instagram will now tell users when the app is down

Instagram is testing a new alert feature that will tell users when the app is down.

The social media network said the alert will appear as a notification in users’ Activity Feed when ‘people are confused and looking for answers’ because of an outage or technical issues.

Instagram said it would trial the feature in the US for the ‘next few months’, before potentially rolling it out more widely ‘if it makes sense to’. 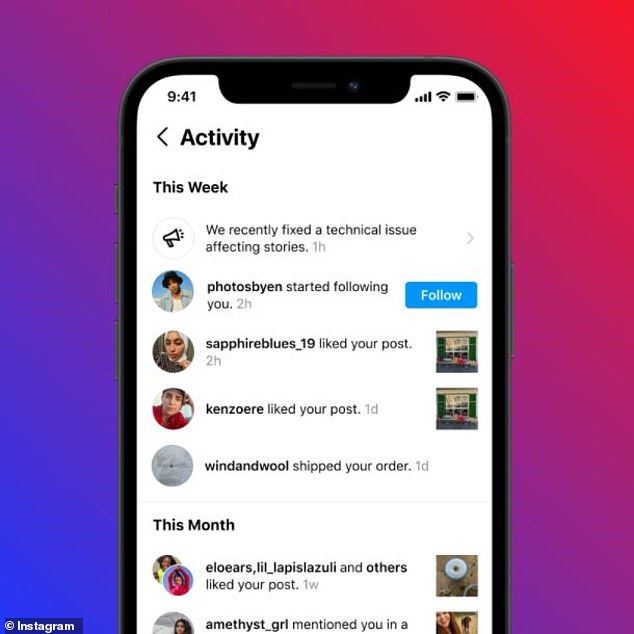 Trial: Instagram is testing a new alert feature that will now tell users when the app is down 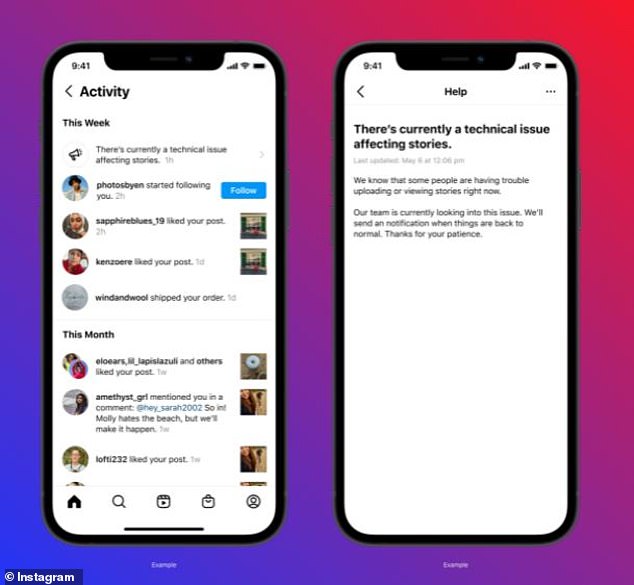 Test: The social media network said the alert will appear as a notification in users’ Activity Feed when ‘people are confused and looking for answers’ because of an outage or technical issues

Last week Instagram went down for almost seven hours after its parent company Facebook made a faulty update that disconnected its servers from the internet and brought all of its services to a halt.

In September, a technical issue with Instagram also caused an outage that plagued users around the world for 16 hours.

Problems started just after 8am on Thursday. About 18 hours later, at 2am on Friday, Instagram announced the problem had been fixed.

However, the last time Facebook, Instagram and WhatsApp went down at the same time was in June.

More than a thousand people in countries including the United States, Morocco, Mexico, Bolivia and Brazil reported outages.

The app went down for almost seven hours on October 4 after its parent company Facebook made a faulty update that disconnected its servers from the internet and brought all of its services to a halt.

In a blog post announcing the new outage alert plan, Instagram said: ‘We’re testing a new feature that will notify you in your Activity Feed when we experience an outage or technical issue, and when it is resolved.

‘We won’t send a notification every single time there is an outage, but when we see that people are confused and looking for answers, we’ll determine if something like this could help make things clearer.’

It added: ‘This test will run in the US and go on for the next few months. Just like any experiment, this may be something we roll out more widely, but we want to start small and learn. And if it makes sense to, we’ll expand to more people.’

If the trial proves successful, it would seem likely that Facebook may also introduce a similar outage alert notification for WhatsApp, too.

In the same announcement, Instagram said it was launching a new tool called ‘Account Status’, which will notify users if their content is reported as inappropriate.

‘We’ll start by making it easier for people to know whether their account is at risk of being disabled,’ the company said.

‘In the coming months, we plan to add more information to this tool, giving people a better sense of how their content is being distributed and recommended across different parts of Instagram.’

Users can still appeal if they think the social network has made a mistake by hitting ‘request a review’ from their Account Status, Instagram added.

Facebook’s seven-hour blackout last week is estimated to have cost the company around $100million in lost revenue alone.

The outage meant engineers had to travel to its Santa Clara data centre to fix the glitch in-person, but the repair was delayed because many staff are still working from home as a result of the Covid pandemic, according to one insider.

They said the glitch also brought down messaging services that remote-working staff use to communicate, so those who knew how to fix the servers couldn’t get that information to the teams inside the data centre.

The disruption was partly to blame for a nose-dive in Facebook’s share price that saw $47billion wiped from its value in its second-worst day ever on the stock market, also driven by a whistleblower testifying in Congress about the harms the site does to teenagers.

Mark Zuckerberg — who lost around $7billion amidst the carnage — has previously vowed to make work from home a permanent part of Facebook, telling staff back in June that ‘anyone whose role can be done remotely can request remote work.’

Facebook, Instagram and WhatsApp were all brought down for almost seven hours last week in a massive global outage.

Problems began at around 16:45 BST (11:45 ET) on October 4, leaving users unable to access the three platforms, as well as Facebook Messenger and Oculus, for the rest of the evening.

Facebook, which owns all the services, blamed the outage on a bungled server update and said there was ‘no malicious activity’ behind it.

The US tech giant said the problem was caused by a faulty update that was sent to its core servers, which effectively disconnected them from the internet.

But what exactly went wrong and why did it take more almost seven hours to fix? Here is MailOnline’s breakdown of the issue… 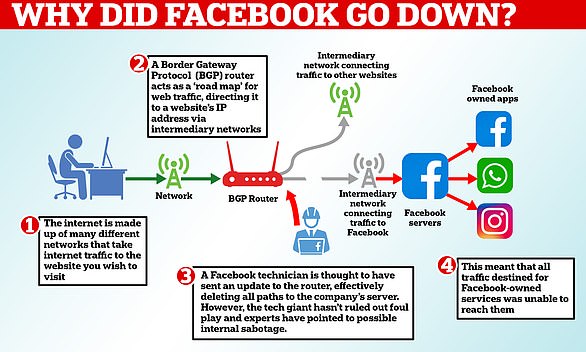 Facebook, Instagram and WhatsApp were all brought down for almost seven hours last week in a massive global outage. The US tech giant said the problem was caused by a faulty update, which effectively disconnected its services from the internet (pictured)

Facebook issued a statement saying the cause of the problem was a configuration change to the company’s ‘backbone routers’, which coordinate network traffic between the tech giant’s data centres.

‘This disruption to network traffic had a cascading effect on the way our data centers communicate, bringing our services to a halt,’ the statement said.

Web security firm CloudFlare offered more details about what happened, revealing that Facebook had effectively vanished from the internet.

The social media company made a series of updates to its border gateway protocol (BGP), CloudFlare’s chief technology officer John Graham-Cunningham said, causing it to ‘disappear’.

The BGP allows for the exchange of routing information on the internet and takes people to the websites they want to access.

It is essentially the roadmap that transports you to the location of each website – known as the Domain Name System (DNS) – or its IP address.

As a consequence of the BGP problems, it meant DNS resolvers all over the world stopped resolving their domain names.

This is because the tech giant has a centralised, single back end for all of its products.

Downdetector, which tracks outages, said it was the biggest failure it has ever seen, with 10.6 million problem reports around the world. Pictured, the issues starting at 16:44 BST (11:44 ET) on October 4

Facebook runs its own systems through the same servers, meaning everything needed to fix the problem – from digital engineering tools to messaging services, even key-fob door locks – was also taken offline.

Matthew Hodgson, co-founder and CEO of Element and Technical Co-founder of Matrix, said the outage illustrated the advantage of having a ‘more reliable’ decentralised system that doesn’t put ‘all the eggs in one basket’.

‘There’s no single point of failure so they can withstand significant disruption and still keep people and businesses communicating,’ he added.

How many people were affected?

Downdetector, which tracks outages, said it was the biggest failure it has ever seen, with 10.6 million problem reports around the world. 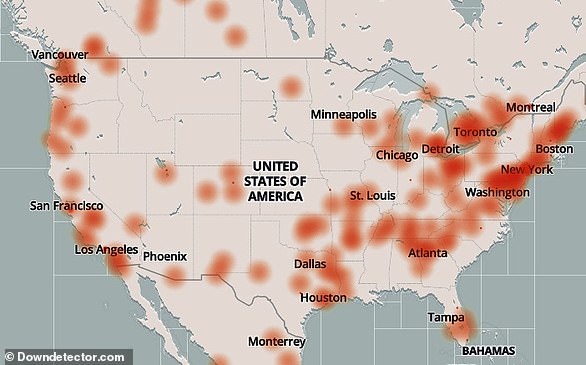 From around 22:30 BST (17:30 ET), some users were reporting that they were able to access the four platforms once again. However, Facebook did not work again for many people until at least an hour after that.

Why did it take so long to resolve the problem?

When Facebook’s platforms went offline, engineers rushed to the company’s data centres to reset the servers manually, only to find they couldn’t get inside.

New York Times’ technology reporter Sheera Frenkel told BBC’s Today programme this was part of the reason it took so long to fix the issue.

‘The people trying to figure out what this problem was couldn’t even physically get into the building’ to work out what had gone wrong, she said.

To make matters worse, one insider claimed the outage was further exacerbated because large numbers of staff are still working from home in the wake of Covid, meaning it took longer for them to get to the data centres.