Interactive map reveals the technologies that could power our cities

Stroll through the streets of the future! Interactive map reveals the technologies that could one day power our cities – including landing pads for drone deliveries, net-zero carbon buildings and hydrogen powered buses

A new interactive map reveals the technologies that could one day power our cities – and help countries reach net zero targets.

Working with the UK Green Building Council, EON used insight from experts across energy and transport sectors to create the map, described as a blueprint of ‘what the UK’s cities should aspire to become’.

The city map marks out nearly 20 ‘smart solutions for a lower carbon future’ with a small pin, which users can click on to reveal further information 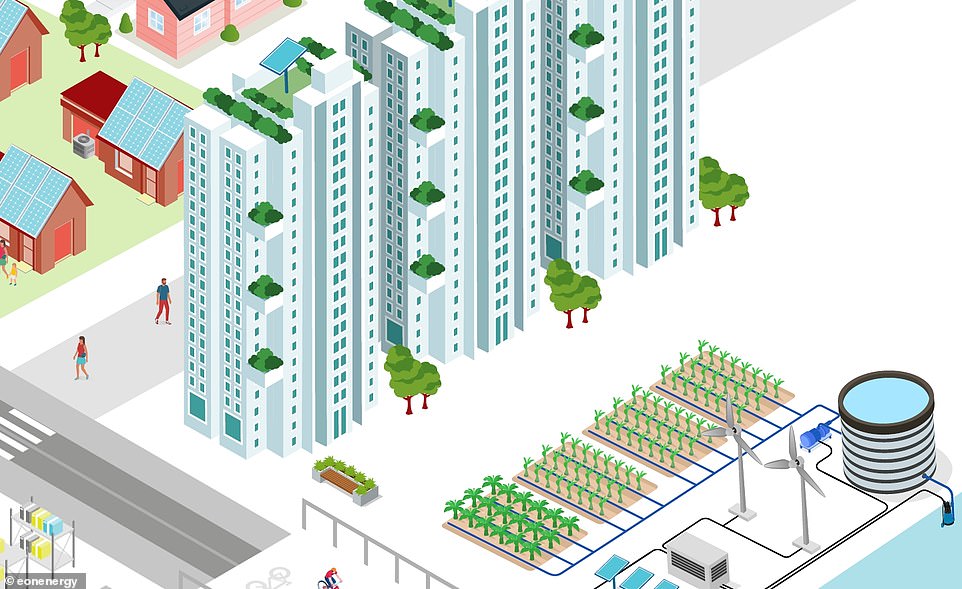 On the edge of the city is also an irrigation system to harvest rain and river water, which is used to grow crops for nearby tower block residents 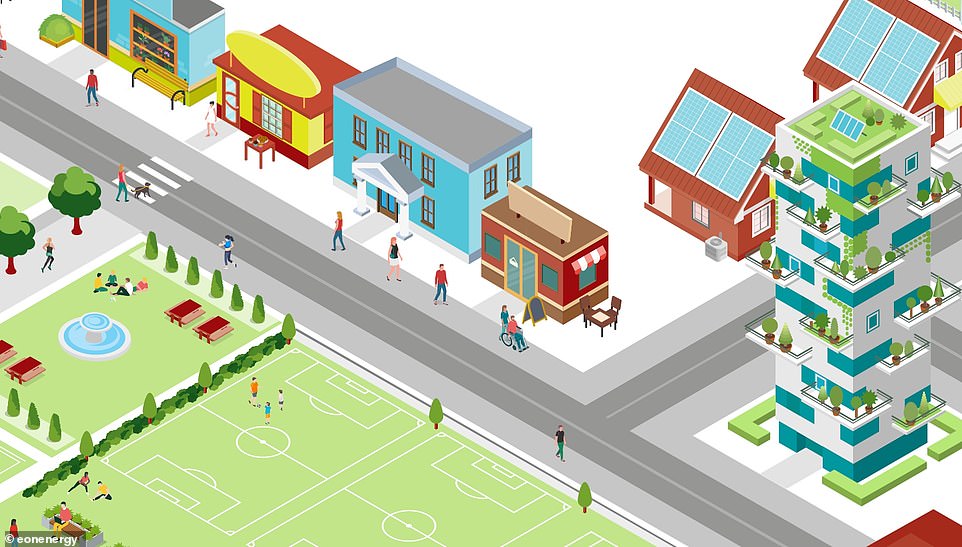 A reduction in cars means old car parks in the city centre can be transformed into new recreational areas, such as parks and sports pitches

Adapting such innovations can help reach net zero emissions, meaning any greenhouse gas emissions are balanced by schemes to offset an equivalent amount of emissions from the atmosphere.

As part of the UK’s Net Zero Strategy, the government aims to reach net zero emissions by the year 2050, although hitting the target could require a major rethink of what a city looks like.

‘But we urgently need to rethink how they are designed, constructed and maintained if we are to meet the needs of society.

‘We’re all only too aware of the impact of rising energy prices and recent extreme weather conditions on individuals, households and businesses across the country.

‘Our streets and cities must now urgently adapt and transform so that our communities and nature can thrive, as we work toward achieving our net zero 2050 target.’

The new map marks out nearly 20 individual ‘smart solutions for a lower carbon future’ with a small pin, which users can click on to reveal further information.

One shows a unique energy-sharing system between three buildings – a hospital, an office block and a city hall.

Any excess heat generated by the operations of one of the buildings is passed to the other two when it’s needed, rather than lost into the atmosphere.

On the edge of the city is an irrigation system to harvest rain and river water, which is used to grow crops for nearby tower block residents.

Homes are designed with solar panels, solar glazing in the windows, heat pumps and insulation, in line with net-zero standards.

There are abundant charging points for electric vehicles, supporting the switch away from gas and diesel vehicles, the sale of which are set to be banned in the UK by 2030.

And there are drone landing pads around the city that allow traditional van deliveries to be replaced, helping to eliminate congestion on the roads.

Overall, roads in the smart city are quieter than the ones of today, as individual journeys in personal vehicles are reduced in favour of connected public transport and ridesharing.

A reduction in cars means old car parks in the city centre have been transformed into new recreational areas, such as parks and sports pitches.

Buses, meanwhile, use hydrogen as their energy source, which is free from harmful greenhouse gas emissions.

The only by-product is water from the chemical reaction of hydrogen with oxygen from air, a process that produces electricity to power the bus. 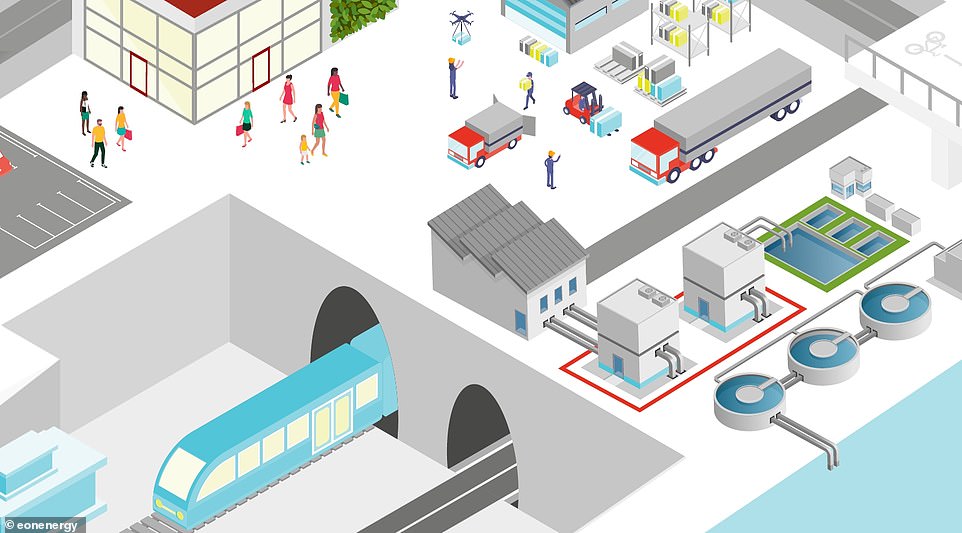 Cities of the future capture ‘waste’ heat from sources such as sewers and underground railways, repurposing it to heat for residential and commercial buildings and avoiding the need for new energy sources 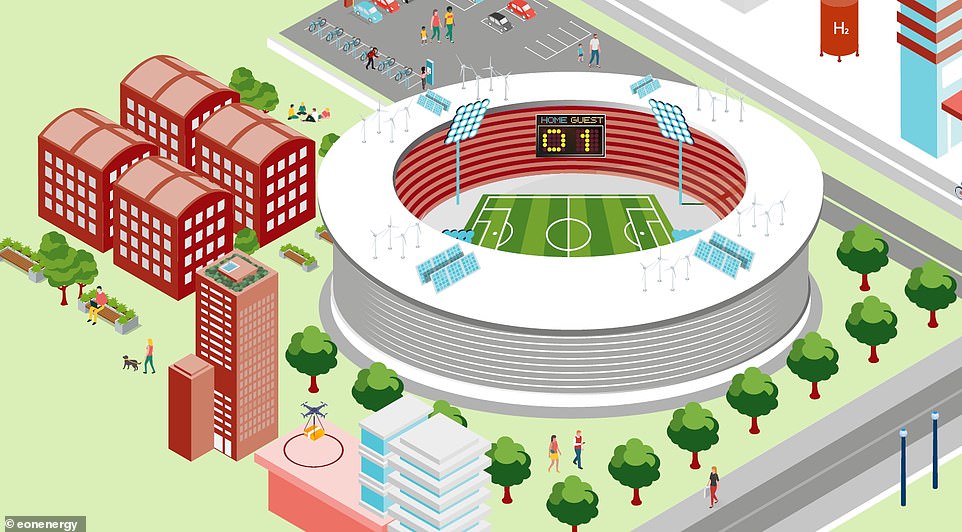 Depicted is a football stadium powered by wind and solar energy. Below the stadium is a drone delivery landing pad, which will largely replace road-based delivery vehicles

The map also shows more green spaces, trees and ‘green walls’ – sides of buildings that are covered with vegetation.

These can help pull excess CO2 out of the air and convert it into oxygen.

Pedestrian walkways are wider and more abundant, reflecting a space designed primarily for accommodating people rather than cars.

The map has launched following a nationwide survey of 20,000 people carried out for EON which found 51 per cent of UK adults agree the country needs to move faster to address climate change. 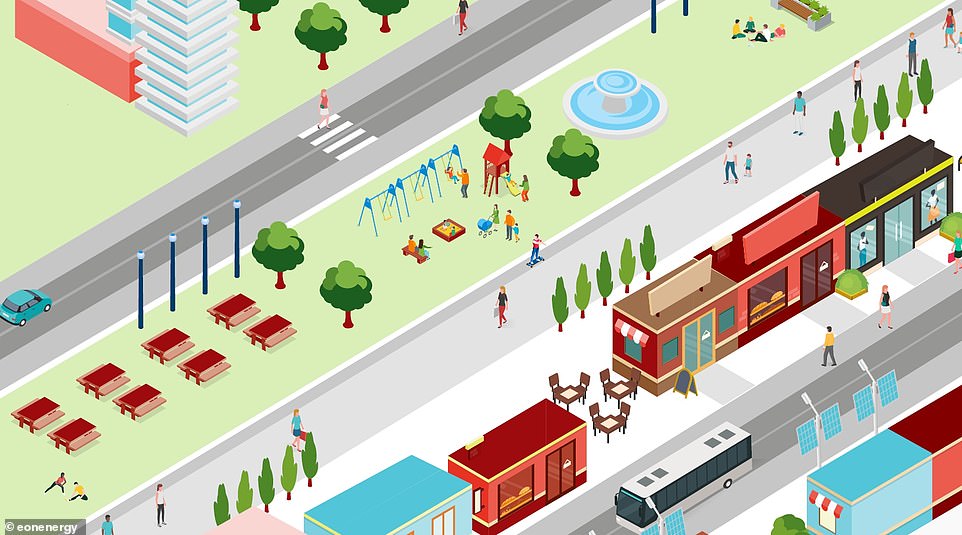 Pictured, wider green spaces and walkways for recreation, hydrogen-powered buses and street lamps fitted with solar panels to supply their own power

The survey also found that more than 23 million people nationwide want to live in the UK’s ‘greenest’ city, and that 60 per cent think taking action for climate starts with communities and cities.

According to United Nations, cities consume almost four-fifths of the world’s energy and emit more than 60 per cent of greenhouse gas emissions.

‘It’s vital that they lead the way in transforming how they are heated and cooled, how transport is managed, and how they support people’s lives,’ said Michael Lewis, chief executive of EON UK.

‘We must create communities that reduce our impact on the planet while being inclusive, safe and equipped to offer every citizen access to a good quality of life.’