Social distancing really does go out the window when you’re drunk! Strangers who drink alcohol together draw physically closer to each other as they become more and more intoxicated, study finds

According to researchers in the US, strangers who consume alcohol together may keep their distance initially, but draw physically closer as they become intoxicated.

The experts, at University of Illinois Urbana-Champaign, compared the effects of alcoholic and non-alcoholic drinks on distancing between friends and strangers.

In a lab setting, alcohol caused the strangers to draw significantly closer to each other during social exchange, reducing physical proximity at a rate with ‘potentially important implications for public health’.

The study suggests trying to implement any form of social distancing in British pubs once they open properly would be a lost cause.

In England, pubs will open for customers indoors on May 17, while all forms of social distancing – including in pubs – is set to be scrapped from June 21. 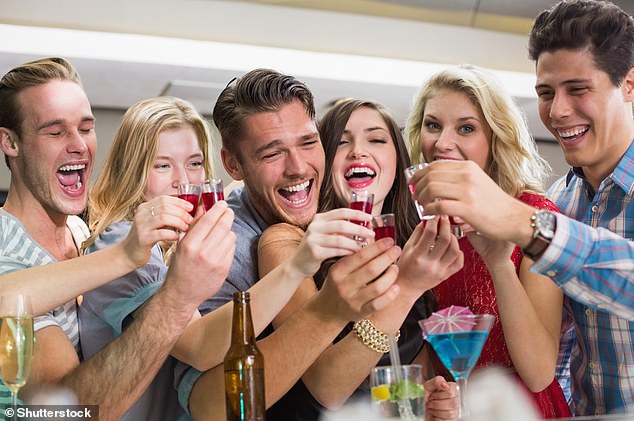 Strangers and alcohol is a potentially hazardous mix as far as social distancing is concerned, according to the US study. The combination reduces physical proximity at a rate with ‘potentially important implications for public health’, the authors say

No previous studies have tested the effects of alcohol consumption on social distancing, according to the researchers – in fact, they say there’s been a complete lack of evidence regarding alcohol’s effects.

Alcohol’s ability to break down social conventions between strangers is well-known – often leading to friendly (and unfriendly) physical contact.

‘Of the restrictions enacted during Covid-19, among the more controversial surround alcohol,’ the scientists say in their paper. 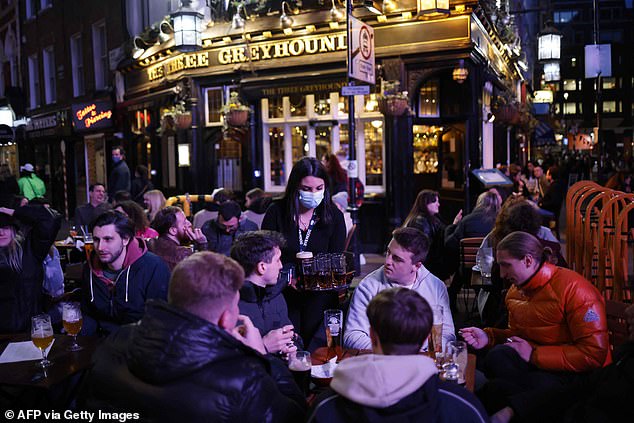 Customers enjoy drinks at tables outside the bars in the Soho area of London, on April 12, 2021. The public will finally be permitted to drink indoors from May 17

The start of the pandemic saw the Government impose a broad two metre social distancing rule which applied across all of society.

But that rule was amended when Boris Johnson ended the first lockdown last year on July 4.

The government continued to advise people who are not from the same household to stay two metres apart.

But it also introduced a new ‘one metre plus’ rule for circumstances where a two-metre distance could not be stuck to.

The ‘plus’ represents taking a precautionary measure such as wearing a face mask or sitting side-by-side rather than face-to-face.

Both rules are still in effect today but the PM has said he is hoping to be able to scrap the measures from June 21, the final stage in his lockdown exit roadmap.

To test how social familiarity influences drinking behavior, the researchers asked study subjects to each bring a friend also participated in the study.

The 212 young, healthy social drinkers in total were assigned to different experimental conditions.

‘In half of the cases, participants drank with a friend,’ said Catharine Fairbairn, a professor of psychology at the University of Illinois Urbana-Champaign who led the research.

‘In the other half, they drank with the friend of another participant – a stranger.’

The pairs were assigned to consume either alcoholic or nonalcoholic beverages.

The team gave those in the experimental condition enough alcohol to bring their blood-alcohol to levels associated with intoxication.

Beverages were administered in three equal parts over 36 minutes, during which time participants’ behaviours were videotaped

‘We measured distance between the individuals via machine-learning methods that detect hands, arms, legs and head position for each person in the video,’ said study co-author Nigel Bosch, a professor of information sciences and of educational psychology at the university.

‘We used a bit of geometry to turn the pixel coordinates of people detected in the video into real-world distances based on objects of known size visible in the video.’

Friends tended to draw close to one another whether or not they consumed alcohol, the researchers found.

But participants interacting with a stranger only moved closer to that individual if they were intoxicated. 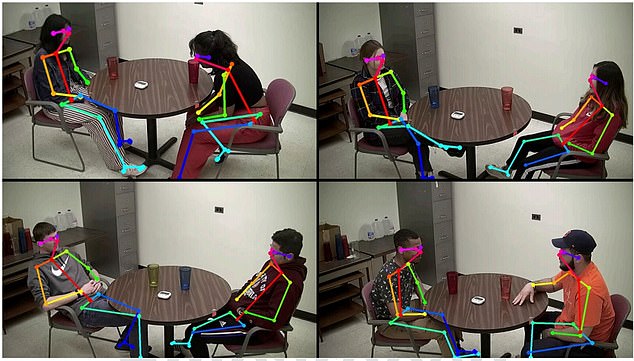 ‘The physical distance between these pairs decreased by about 1 centimetre [0.4-inch] per three-minute interval,’ Fairbairn said.

Those who drank nonalcoholic beverages with strangers did not draw significantly closer to one another during the experiment, the team also found.

‘This study shows that over time, alcohol reduces physical distance between people who are not previously acquainted,’ said study author Laura Gurrieri.

‘This finding is particularly important in the context of the Covid-19 pandemic because it suggests that alcohol might facilitate virus transmission and impede the following of social distancing guidelines.’

What’s potentially worrying was the lab-based conditions of the experiments, which were less confined than many pubs and bars.

The study was conducted in a quiet, spacious laboratory, rather than a bar, and participants’ ability to move closer to one another was constrained, as they sat across from one another at a table.

‘Folks would likely draw even closer to one another in a crowded bar with loud music when compared with our laboratory environment,’ Fairbairn said.

‘That would have to be the subject of another study.’

The new research has been published in the Proceedings of the National Academy of Sciences.

On May 3, Prime Minister Boris Johnson revealed there is a ‘good chance’ that current social distancing rules will be scrapped on June 21.

The PM said he hopes it will be possible to axe the existing one-metre plus rule when the nation reaches the final step in his lockdown exit roadmap.

His comments came as hospitality bosses said a return to unrestricted trading is ‘critical’ and will mean that pubs, bars and restaurants can ‘come off life support’.

Ditching the one-metre plus rule will allow hospitality venues as well as places like theatres to open at full capacity for the first time in more than a year.

It was reported overnight that one-way systems, screens and mask-wearing while moving around could remain in place in hospitality settings beyond June 21 but customer numbers will no longer be limited.

Audiences in theatres and cinemas will have to wear face coverings during performances, while there will be strict guidance on ventilation and staggered entry, according to The Times.

Speaking during a visit to Hartlepool, Mr Johnson said: ‘As things stand, and the way things are going, with the vaccine rollout going the way that it is – we have done 50 million jabs as I speak to you today, quarter of the adult population, one in four have had two jabs.

‘You are seeing the results of that really starting to show up in the epidemiology.

‘I think that we will be able to go ahead, feels like May 17 is going to be good.

‘But it also looks to me as though June 21 we’ll be able to say social distancing as we currently have to do it, the one-metre plus, I think we have got a good chance of being able to dispense with the one-metre plus from June 21. 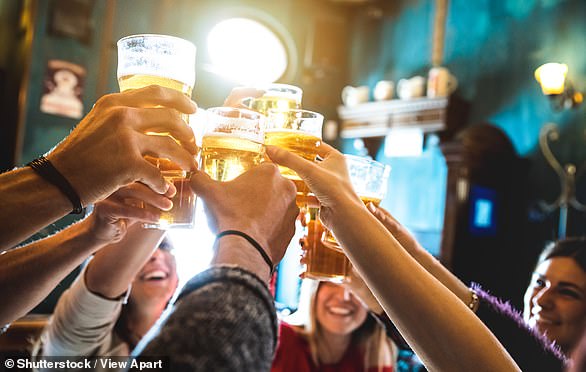 Hospitality bosses said a return to unrestricted trading from June 21 is ‘critical’ and will mean that pubs, bars and restaurants can ‘come off life support’

One hospitality industry figure urged the government to allow a return to normality.

Kate Nicholls, chief executive of trade body UKHospitality, said: ‘A return to unrestricted trading on June 21 is critical and will mean hospitality businesses come off life support and be viable for the first time in almost 16 months.

‘We urge the government to confirm reopening dates and these plans at the earliest opportunity, which will boost confidence and allow companies to step up planning and bring staff back.’