And Dr Hannah Wakeford believes the revolutionary equipment represents a “paradigm shift” in terms of the world mankind’s understanding of the universe. US President Joe Biden unveiled the first, spectacular image taken by JWST at the White House on Wednesday, with several more released the following day.

One in particular is of interest to Dr Wakeford, a lecturer in Astrophysics in the School of Physics at the University of Bristol – a detailed atmospheric breakdown of an exoplanet planet dubbed Wasp-96b, located 1,120 light years from Earth.

She told Express.co.uk: “What you’re seeing is the spectrum of the atmosphere of a planet orbiting around another star.

“We get that information by looking at the planet as it passes in front of the star from our point of view. It’s kind of like watching a fly passing in front of a street lamp.

“You’re seeing a small amount of light blocked out but what’s actually happening is some of that starlight is shining through the planet’s atmosphere.

“And every atom and molecule in the universe absorbs light in different ways. We see that in our own atmosphere – water absorbs light in the infrared, we’ve got our beautiful clouds in the sky that that reflect that light as well.“

By looking at the light which was travelling through this planetary atmosphere, it was possible to measure what it was made of, Dr Wakeford explained.

She added: “What you’re seeing in that spectrum is the signatures of steam, water vapour, water gas in the atmosphere of this distant planet. 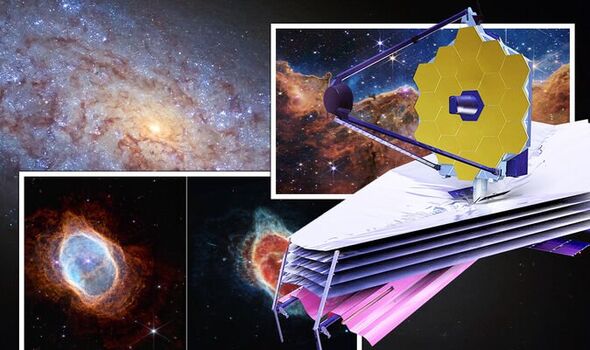 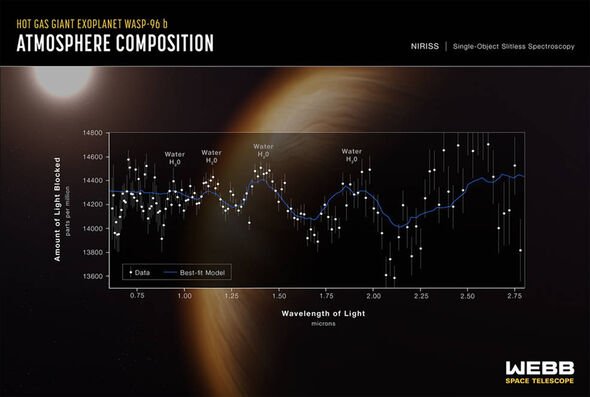 “But it’s not anything like that we can imagine here, this is a giant hydrogen helium Jupiter-sized planet. It is massive.

“It is over eleven times the radius of the Earth, so line up 11 Earth in a row. That’s the size of the planet.”

Neither was Wasp 96b likely to be home to our celestial cousins, Dr Wakeford stressed.

She said: “This is this is not a nice place to visit. It’s over 1000 degrees. So it’s not our holiday destination.

“What this is really showing is the amazing capabilities of this telescope to look at the atmospheres of distant planets and understand what they’re made of.

“This is just the first in a humongous slew of data coming in.”

The images released so far were just the “tip of the iceberg” and the first thing in a “plethora of amazing data that we’re going to be seeing over the next two decades and even more”, she estimated. 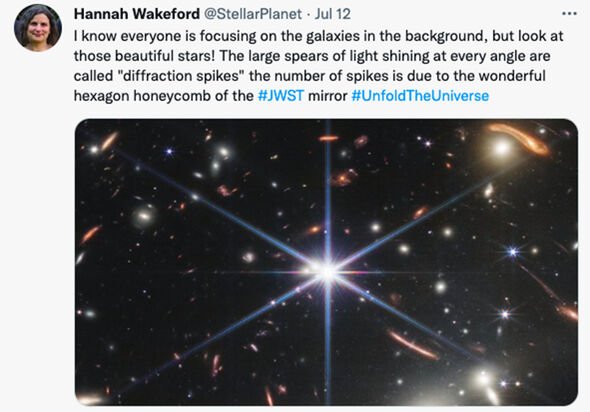 She said: “We’ve got we’ve got so much more to look forward to from this telescope and I just I can’t even express clearly how amazing and how much of a revolution this is going to be in science and our understanding of the universe.”

As such, JWST represented a quantum leap compared with the Hubble space telescope, launched in 1990 and itself considered a revolutionary piece of kit.

“It is going to completely change our ability to tell you what the nature of these alien worlds is like.”

Despite the staggering sophistication of JWST’s instruments, not least its 21.4-foot-wide mirror, it was not a simple process, Dr Wakeford emphasised, specifically referring the analysis of Wasp-96b.

She said: “There was a huge amount of work behind what we saw the other day. There’s a lot of effort that needs to go into that.

“Everything that was showcased this week, 20,000 astronomers and scientists and engineers and various people in across fields worked towards getting those images to us. 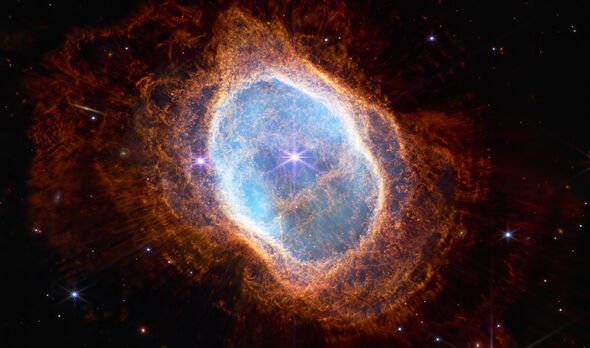 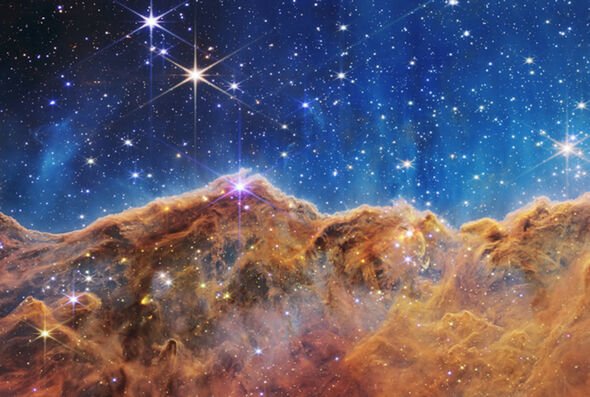 “It’s not an easy thing to do. You don’t just point the telescope and get that spectrum, that requires a huge amount of work.

“And the very first aim for these planets is to detect whether they have an atmosphere at all.

“And once we’ve worked out whether they have an atmosphere, we can go and look more and we can get more observations of these planets, build up the signal that we can get, and then start to understand what these planets’ atmospheres are made of.”

Dr Wakeford believes the next few years will be characterised by a “nice steady understanding that we build up” adding: “We get knowledge we build it up, we ask a question, we look again and we build up that knowledge and I think that’s going to be a really nice process that we’re going to see over the next coming year.

As for discovering worlds similar to Earth – sometimes referred to as Goldilocks planets as a result of being not too hot and not too cold, Dr Wakeford is cautiously optimistic.

She said: “Discovering those planets is something that is done prior to the observations we’ll be making with JWST.

“So discovering the presence of a planet at the right orbital distance from its star is something that we need before we point this telescope at it. 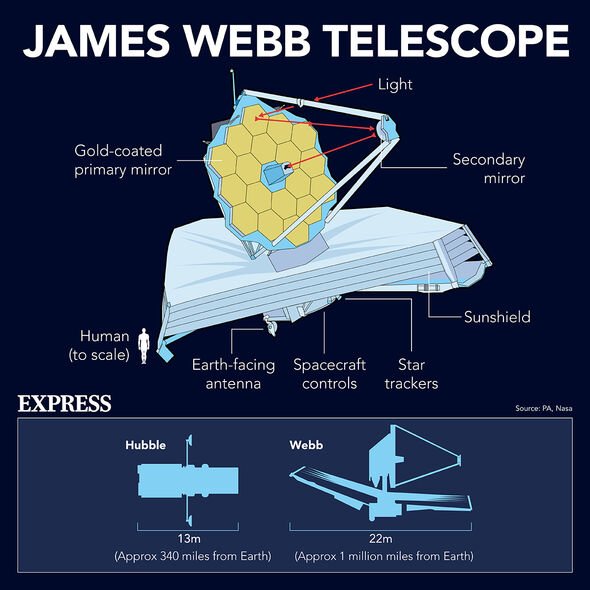 “And then when we point this telescope at it, we’re asking the question, can we measure its atmosphere? There are already what we would call ‘Goldilocks planets’ that we will be pointing the telescope at to try and understand if they have an atmosphere at all.

The large number of variables mean there are no guarantees, Dr Wakeford was at pains to point out.

She said: “We see in our own solar system we have three beautiful Goldilocks planets, the Venus, Earth and Mars and they are all different so we still have that big wide question of Is that common throughout the universe? How can we measure that?

“We’ve got a big job ahead of us, it’s a really exciting job. There’s absolutely nothing like it, but we’ve got lots of planets to look at and we’ve got lots of things to discover and understand about these worlds.”

To refine the search, the Early Release Science Programme, a community driven programme with more than 150 astronomers, will be looking at a Saturn-like planet called Wasp-39b.

Dr Wakeford said: “This going to be produce a really beautiful spectrum, dare I say it, even better than what we saw on Wednesday. 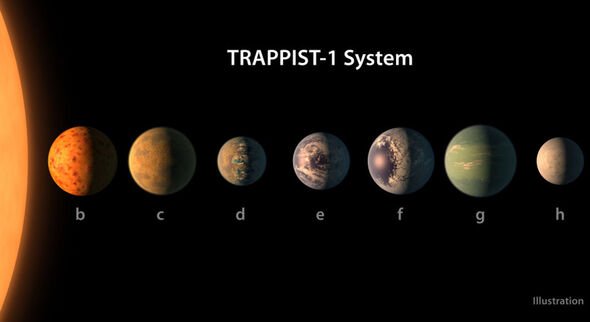 “We have also got smaller planets that we’re going to be looking at. There are a number of different programmes which will be looking at smaller and smaller worlds that have been discovered by the test satellite.

“These have TOI numbers, test objects of interest, so they’re not particularly fascinating to look at but I think what most people would say would be the TRAPPIST-1 planetary system, which has seven Earth-radius, Earth-mass planets that orbit around it, and JWST is going to look at each of them.

“So every single one of those planets will be looked at in the next two years with this telescope, and we’ll get a spectrum of them.

“The question we’re asking is, do these planets have an atmosphere? We don’t know that yet. This will be the first chance to answer that question.”

Looking ahead, she concluded: “It’s hard to imagine right now the amount of things we’re going to know in a year compared with what we know now. I would say definitively that there is an era before JWST data and there is an era after JWST data, and we’ve just crossed that threshold.

“This is an international telescope. This is ESA, the Canadian Space Agency, this is NASA. We have a huge amount of astronomers throughout Europe and I’m actually at the National astronomy meeting at the University of Warwick today where we’ve got 800 astronomers from across the UK and further afield, coming together to discuss and talk about science and astronomy in Europe and the UK and all of these astronomers are raring to go on this data.

“So we’ll be working right here in the UK, I’ve got a team at the University of Bristol where I work where we’re going to be digging into the data actually starting tomorrow.

“So it really is an international effort and UK is a huge part of that. And I think that that’s really really amazing.”