Jealous male butterflies mark their mates with a strong and repulsive smell to deter any potential rivals, a new study shows.

Researchers analysed males of the tropical butterfly species Heliconius melponene in Panama, which creates a chemical in its sex glands, called ocimene.

The species has evolved to produce the powerful anti-aphrodisiac in its genitals, which it leaves behind on the female after sex, acting as a ‘turn off’ for other males.

Somewhat bafflingly to science, the very same chemical is also produced by flowers to actually attract butterflies for pollination.

Researchers identified a gene for the first time that shows H. melponene butterflies and flowers independently evolved to make this same chemical – but for very different purposes.

‘We identified the gene responsible for producing this powerful anti-aphrodisiac pheromone called ocimene in the genitals of male butterflies,’ said lead study author Dr Kathy Darragh at of University of California, Davis.

For a long time it was thought insects took the chemical compounds from plants and then used them to detract love rivals.

‘We have shown butterflies can make the chemicals themselves – but with very different intentions,’ Dr Darragh said.

‘Male butterflies use it to repulse competitors and flowers use the same smell to entice butterflies for pollination.’

Heliconius melpomene from insectaries in Gamboa, Panama. In Heliconius butterflies, there are other closely-related species pairs which differ in their production of ocimene

This sounds highly counterintuitive, but might be explained by context, Dr Darragh suggests.

‘It’s something that we don’t fully understand but we think it has to do with how the signals are processed, perhaps alongside visual images, or other smells such as the other floral scent compounds,’ she said.

‘The scent itself doesn’t vary but the context and therefore how the signal is interpreted does.

‘The visual cues the butterflies get will be important – when the scent is detected in the presence of flowers it will be attractive but when it is found on another butterfly it is repulsive to the males. Context is key.’

H. melponene butterflies live for around six months. The females typically have few sexual partners and they store the sperm and use it to fertilise their eggs over a number of months after a single mating.

The males, meanwhile, have as many mates as they can and each time they mate they transfer the anti-aphrodisiac chemical because they want to be the one to fertilise the offspring.

This chemical is not produced by all butterflies of the Heliconius genus, however – for example Heliconius cydno, another species analysed for the study, does not produce the strong smelling pheromone.

Dr Kathy Darragh, first author of the paper, with a Heliconius butterfly in the Madingley insectary in Cambridge

This new analysis of the power of smell – also called chemical signalling – sheds new light on the importance of scent as a form of communication.

‘The butterflies presumably adapted to detect it and find flowers and they have then evolved to use it in this very different way,’ said study author Professor Chris Jiggins from the University of Cambridge.

‘The males want to pass their genes onto the next generation and they don’t want the females to have babies with other fathers so they use this scent to make them unsexy.

‘Male butterflies pester the females a lot so it might benefit the females too if the smell left behind means they stop being bothered for sex after they have already mated.’

The study has been published in PLOS Biology.

TOXIC MASCULINITY! SOME MALE BUTTERFLIES FORCE A ‘CHASTITY BELT’ ON FEMALES – BUT THEY HAVE EVOLVED LARGER GENITALS TO BLOCK IT

After insemination, some male butterflies excrete a mating plug that prevents females from breeding with another male – like a ‘chastity belt’.

In response, some females seemed to have evolved larger, more complex genitalia that are harder to block.

The result has been an all-out battle of the sexes, with males devising increasingly ornate mating plugs – some with winglike projections, slippery scales or pointy hooks. 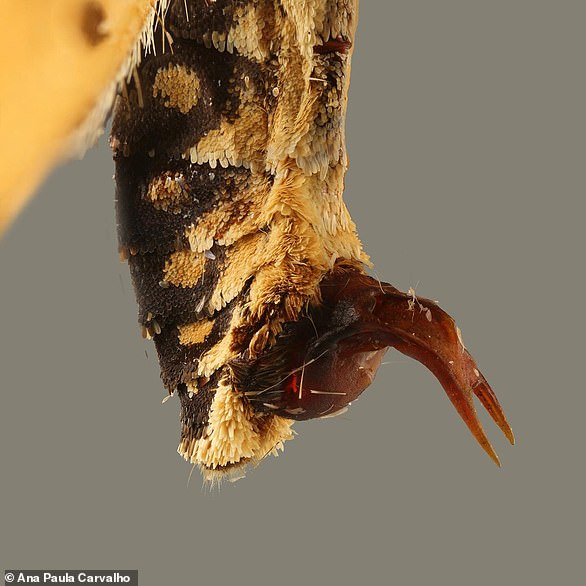 Mating plugs are found in just 1 per cent of butterflies. Simpler plugs may be torn or ripped off by a determined female, but in species with large, complex plugs, researchers rarely encountered a female without one

Rather than use a mating dance or song, a plug-producing male butterfly will grab a female in midair and drag her down to the ground.

After depositing his sperm, he excretes a pre-molded plug from intricate abdominal ducts that give it its shape.

It then hardens on the female, blocking her genitalia but leaving the orifice she uses to lay her eggs unobstructed.

This natural contraceptive allows him to fertilise more females rather than spend time fending off advances from other males.

A female butterfly fertilises most of her eggs with sperm from her last partner, so it’s to the male’s benefit to block access to rivals.

While the female will eventually expel the plug, it may be in place long enough for a male to ensure his sperm have reached the egg and achieved fertilisation.

Read more: Some male butterflies lock their mates up in ‘chastity belts’

What would happen if humans tried to land on Jupiter