Joseph Sonnabend, Early Force in Fight Against AIDS, Dies at 88

When he was growing up in Rhodesia, now Zimbabwe, in the 1930s and ’40s, Joseph Sonnabend would watch his mother, a physician, make house calls in the middle of the night and talk with patients on the phone at all hours. He didn’t want to follow that path, but he did study medicine and become a medical researcher, working alongside Nobel laureates in England on virology and immunology.

When he arrived in New York in 1969, he continued that research. But as a gay man, he was drawn into volunteering at the Gay Men’s Health Project in Greenwich Village and saw a need for doctors who would treat this population. He opened his own practice in the West Village in 1978.

Dr. Sonnabend would become one of the most important figures in the fight against AIDS, if also one of the most unheralded. Both a clinician and a researcher, he described himself as the total package:

“The other doctors who were treating AIDS didn’t have the research experience or the instincts,” he told Sean Strub of POZ, a magazine for people who test positive for H.I.V., in 1998. “And the academic researchers — the top immunologists, virologists and so on — who had the expertise, didn’t have the patients. I had both the background and the patients.”

One of his hallmarks as a clinician was his devotion to his patients — making house calls in the middle of the night and taking phone calls at all hours.

The cause was complications of a heart attack, said David Kirschenbaum, a friend and co-executor of his estate.

Dr. Sonnabend was one of the first doctors to recognize AIDS as it was beginning its deadly march through the gay community.

“Lots of figures in the AIDS epidemic made a contribution, often centered around one or two accomplishments,” Gregg Gonsalves, an epidemiologist at the Yale School of Public Health and a former patient of Dr. Sonnabend’s, said in an email. “But Joe was central in so many different ways in those early years, in research, in clinical care, in policy and activism.”

Dr. Sonnabend went to Dr. Gonsalves’s apartment in the East Village to tell him in person that he had H.I.V. “He visited his patients when they most needed him,” Dr. Gonsalves said, “even on their deathbeds.”

His small office was always jammed with patients, partly because he took so long with each one, and they were protective of him and in turn helped him out.

“Patients in the waiting room sometimes rearranged the order of seeing Joe, based on our collective assessment of who needed to see him first,” Mr. Strub wrote in POZ. “Those of us with insurance remind him to send out bills; those without often helped in his office, cooked him dinner or volunteered with the organizations Joe started.” 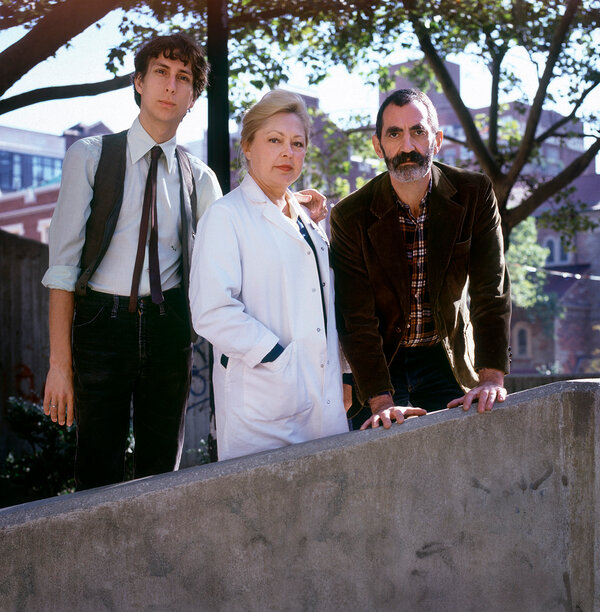 In his broader fight against AIDS, Dr. Sonnabend enlisted the help of a former colleague, Dr. Mathilde Krim, an experienced cancer researcher and philanthropist who would become an important figure in that crusade.

Together, and with others including Michael Callen, an AIDS activist and a patient of Dr. Sonnabend’s, they founded the AIDS Medical Foundation, the first AIDS research group. It is now the Foundation for AIDS Research, one of the world’s largest funding organizations for the disease.

Dr. Sonnabend conducted some of the earliest research into AIDS, often at his own expense. He pioneered community-based research, through which grass-roots doctors are able to conduct clinical trials more quickly than researchers based at universities, partly because they face less red tape and less difficulty recruiting patients. He co-founded the Community Research Initiative, the first organization in a network that hastened studies of treatments of H.I.V. and AIDS.

In the first decade of the epidemic, most deaths were caused by a lethal pneumonia. Dr. Sonnabend pioneered and promoted the use of an inexpensive sulfa drug to prevent this pneumonia in people with H.I.V. Despite his advocacy, it took the federal government more than two years to recommend this preventive treatment as a standard of care.

“Joe’s work has saved hundreds of thousands of lives in the United States and abroad,” Dr. Rebecca Pringle Smith, a researcher and activist who worked with Dr. Sonnabend, said in an interview. “Had it been adopted earlier, it could have saved tens of thousands more.”

The early days of AIDS were marked by many crosscurrents of politics and agendas, and Dr. Sonnabend sometimes found himself at the center of controversy.

For one thing, he promoted safer sex. He was a consultant on a booklet, “How to Have Sex in an Epidemic: One Approach” (1983), which recommended that men use condoms and avoid exchanging bodily fluids. Mainstream AIDS organizations were calling instead for men simply to have “fewer partners,” which Dr. Sonnabend characterized as “like playing Russian roulette less often.”

“Many people in the gay community took his message of safe sex as anti-sex,” Mr. Kirschenbaum said in an interview. “They thought he was putting limits on sexual freedom.”

He also suffered a ferocious backlash when he hypothesized that AIDS was caused by a collection of multiple factors, including a prior history of sexually transmitted infections. Many felt he was too slow in acknowledging H.I.V. as the cause.

At another point, he squabbled with his own organization, the Foundation for AIDS Research. He split from the foundation after some of its officials, without his knowledge, gave what he felt was exaggerated information to the news media about the threat of AIDS to heterosexuals.

These controversies receded over time, and in 2000 the foundation gave him an award citing his “Olympian contributions to the fight against AIDS during years when this was a lonely and thankless endeavor.”

Joseph Adolph Sonnabend was born on Jan. 6, 1933, in Johannesburg and grew up in Bulawayo, in what was then Rhodesia.

His mother, Fira, who grew up in Russia and studied in Italy, was a family doctor, one of the first Western-trained female physicians in Rhodesia and a champion of birth control. His father, Heinrich, originally from Germany, was a professor of psychology and sociology. They filled the house with art and music — including piano lessons for Joseph — and shared a commitment to social and racial justice.

Joseph graduated from the University of the Witwatersrand in Johannesburg in 1956 and from the Royal College of Physicians in Edinburgh in 1961.

He trained at the National Institute for Medical Research in Mill Hill, a suburb of London, working with colleagues who made important discoveries involving interferons, naturally occurring proteins that interfere with viruses.

Moving to New York, he continued that research at the Mount Sinai School of Medicine and at the SUNY Downstate Medical Center in Brooklyn. He moonlighted with the New York City Health Department, where he tracked outbreaks of sexually transmitted diseases.

When he opened his clinic and began treating people with AIDS, the co-op board in his building sought to evict him, saying that having AIDS patients troop through the lobby would lower property values. Dr. Sonnabend and five of his patients sued and won what became one of the first AIDS-related civil rights cases.

After 35 years in New York, he retired and moved to London.

Complete information on Dr. Sonnabend’s survivors was unavailable. He was briefly married and had two sons from other relationships. His sister, Yolanda Sonnabend, a renowned stage designer, died in 2015.

At the height of his involvement with AIDS in New York, Dr. Sonnabend would seek refuge in music, stealing a few moments to play his Steinway and even compose.

In 2018, at the age of 85, he made his public debut as a composer when selections of his music were performed at two concerts at London’s opulent Fitzrovia Chapel. For both concerts, the chapel was filled to capacity.