Japanese billionaire Yusaku Maezawa selects eight artists to join him on a flyby around the MOON on a SpaceX spaceship next year – including K-pop rapper T.O.P., DJ Steve Aoki and British photographer Rhiannon Adam

Japanese billionaire Yusaku Maezawa has revealed the eight artists that will join him on an ambitious civilian flyby around the moon on a SpaceX spaceship next year.

Adam, originally from Ireland and based in Hackney in London, is the only woman in the team, but she’ll become the first openly queer woman to go to space.

At some point next year, the civilian crew will orbit the moon aboard SpaceX’s Starship rocket for about seven days without landing on it before returning to Earth. 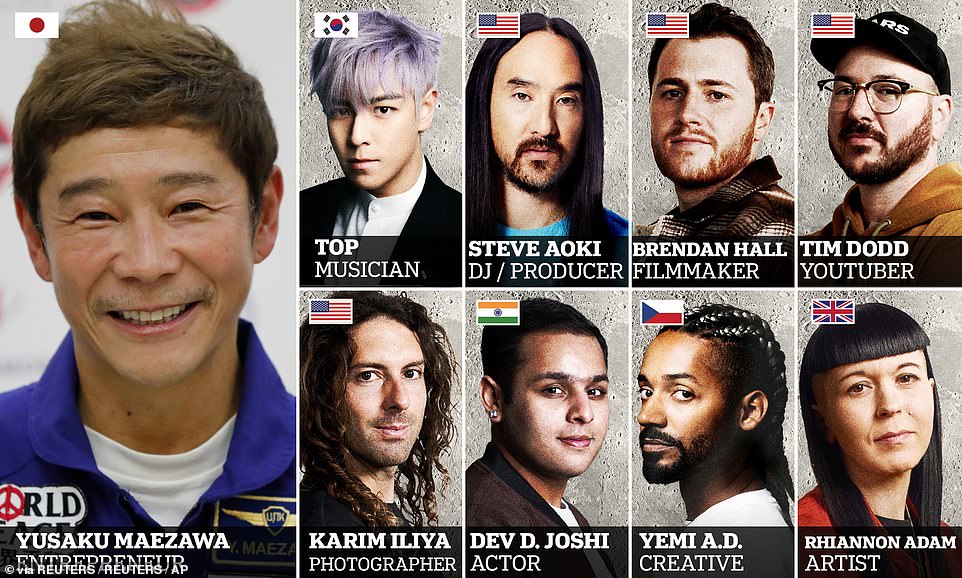 Steve Aoki – Grammy nominated music producer, artist, fashion designer and entrepreneur, based in the US

Yemi AD – Choreographer and ‘social innovator’ from the Czech Republic

Brendan Hall – Documentary filmmaker from the US

Karim Iliya – Photographer and filmmaker, based between Iceland and Hawaii

In case any of the eight have to drop out, US Olympic snowboarder Kaitlyn Farrington and Japanese dancer Miyu have also been chosen as backups.

Rhiannon Adam said: ‘Every day I pinch myself – it seems like an impossible dream coming true. I aim to create work that does justice to this transformative experience.

‘In the middle of the pandemic, we were, of course, all grounded, which was incredibly frustrating for me as I felt that I’d lost my purpose.

‘But then, while idly scrolling Twitter, I came across dearMoon, and it seemed like the most epic, and life changing adventure.

‘When I discovered that I was selected, I cried. And I’m not usually much of a crier. I think it was overwhelming and had seemed just so impossible, and even then, it didn’t seem real. It did make me think that perhaps I should have played the lottery more.’

T.O.P., whose real name is Choi Seung-hyun, started out as an underground rapper before joining Big Bang, one of the world’s top boy bands, in 2006.

The 35-year-old said in a video released by the dearMoon website that he has always fantasized about space and the moon since he was a child, adding ‘I cannot wait’.

‘When I finally see the moon closer I look forward to my personal growth and returning to the earth as an artist with an inspiration,’ he said.

The man with the money who is paying for the mission, Yusaku Maezawa, revealed plans for the lunar voyage in 2018, buying all the seats on the spaceship.

He began taking applications from around the world in March 2021 for what will be his second space journey,  after his 12-day trip to the International Space Station (ISS) on the Soyuz Russian spaceship a year ago.

Maezawa, 47, and his producer Yozo Hirano became the first self-paying tourists to visit the space station since 2009. He has not disclosed the cost for that mission, though reports said he paid $80 million. 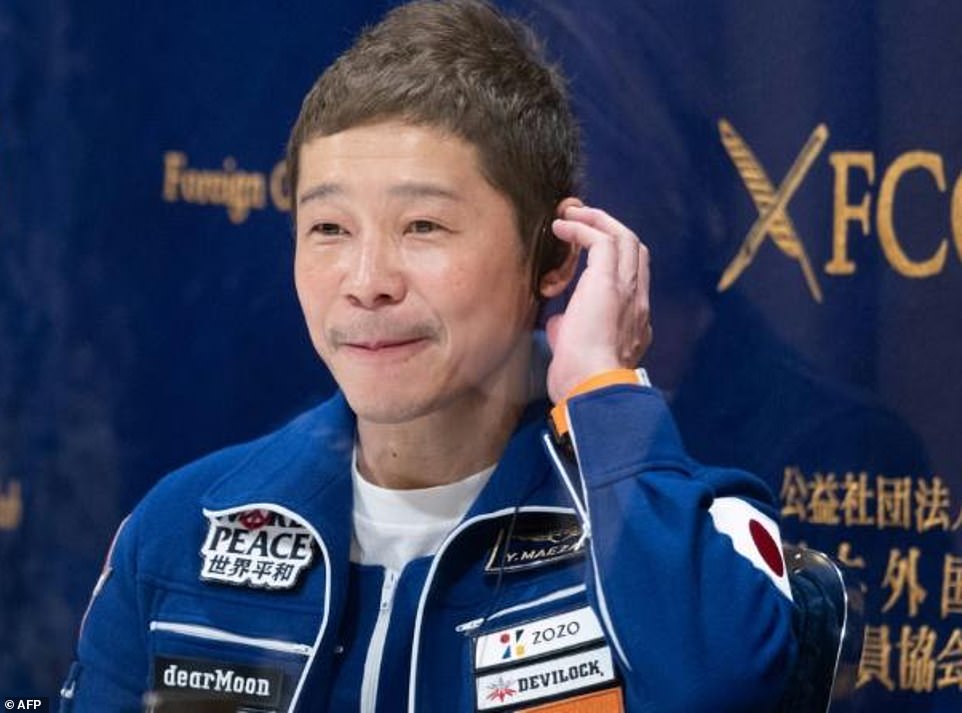 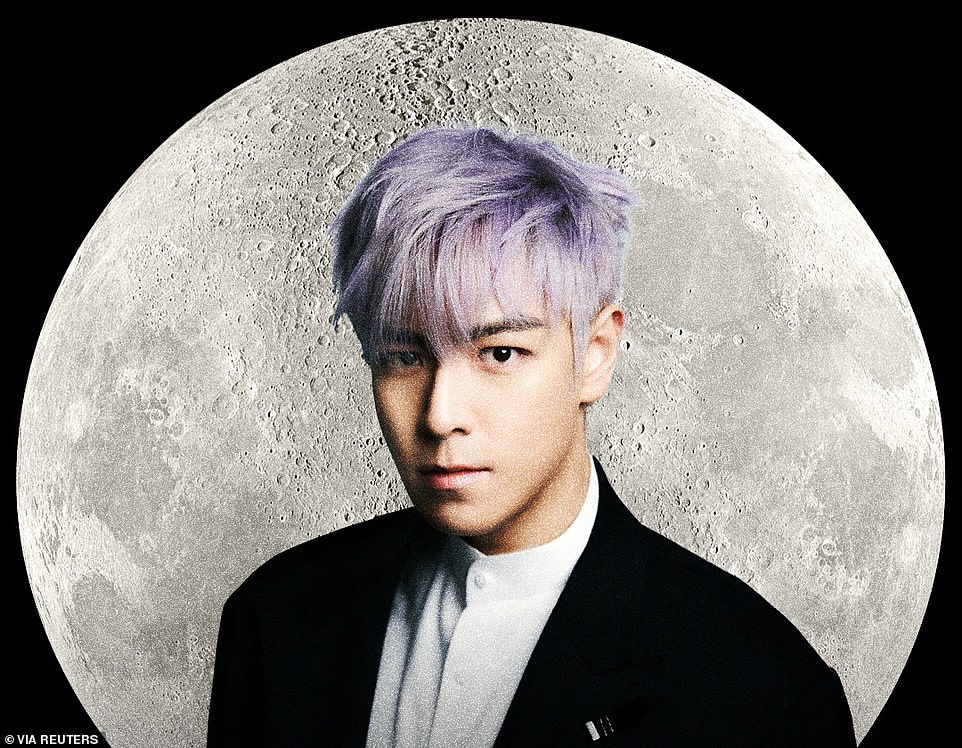 T.O.P., whose real name is Choi Seung-hyun, started out as an underground rapper before joining Big Bang, one of the world’s top boy bands, in 2006 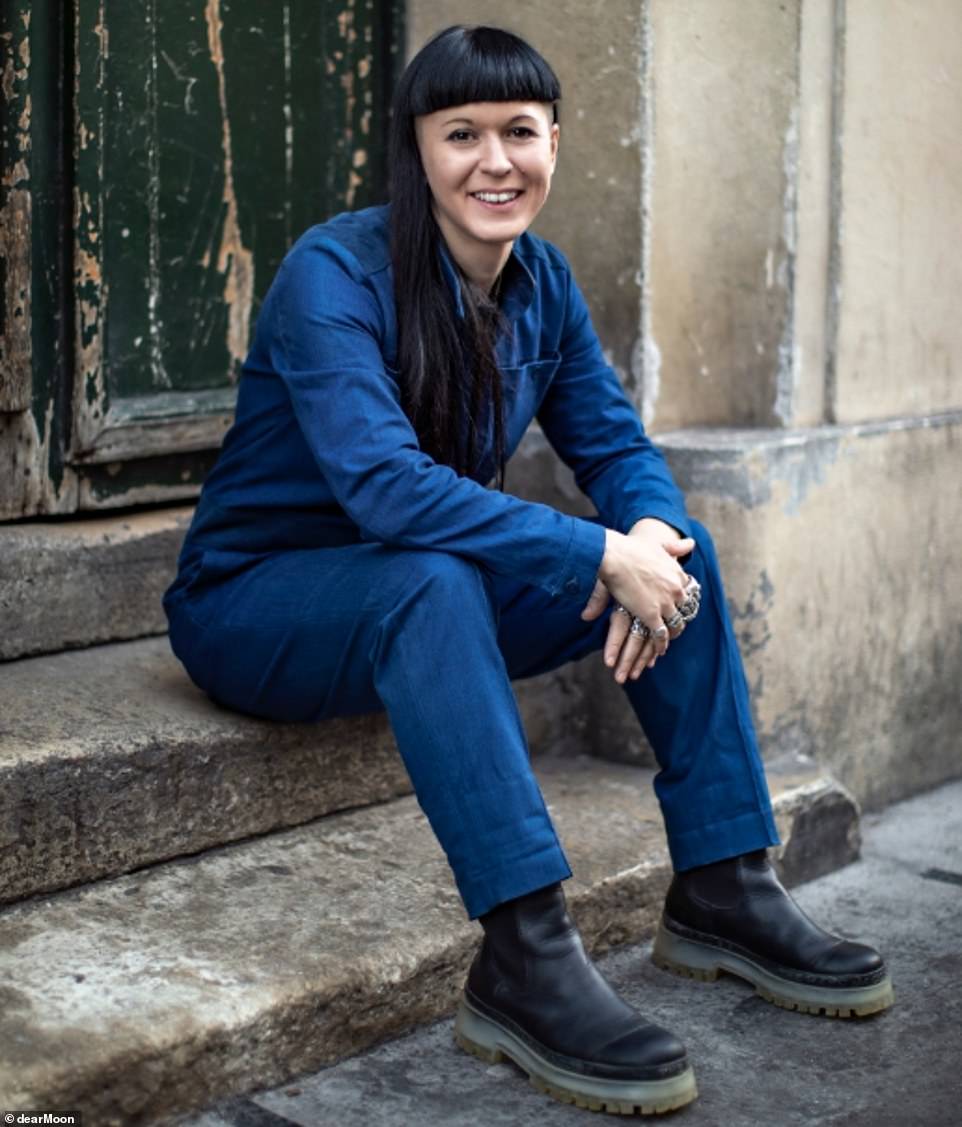 Adam, originally from Ireland and based in Hackney in London, is the only woman in the nine person crew, but she’ll become the first openly queer woman to go to space 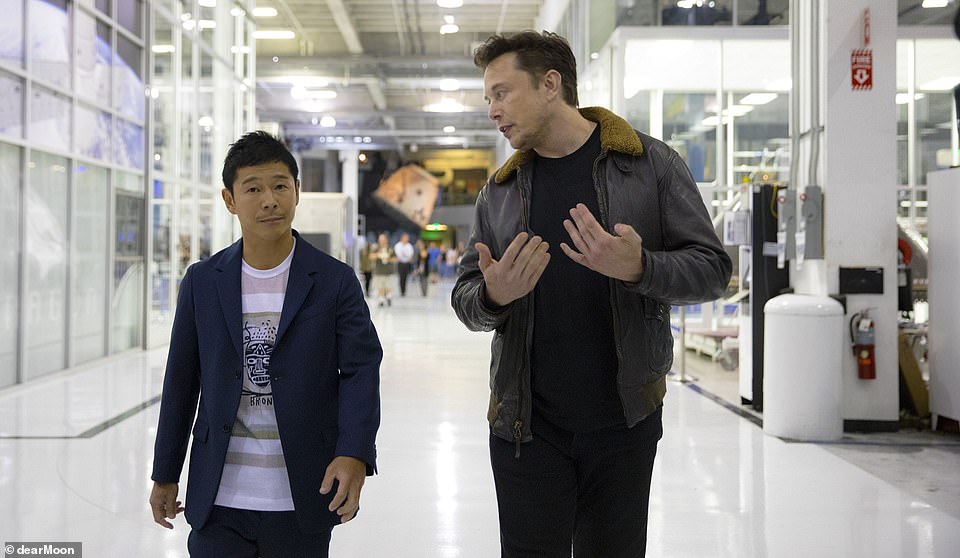 Yusaku Maezawa, who made his money through the fashion industry, launched plans for the lunar voyage in 2018, buying all the seats on the spaceship. He’s pictured here with SpaceX CEO Elon Musk

The dearMoon project is a lunar tourism mission conceived and financed by Japanese billionaire Yusaku Maezawa.

Aboard SpaceX’s Starship rocket, the civilian crew will orbit the moon for about seven days without landing on it before returning to Earth.

The passengers will be Maezawa, eight other civilians who are all artists or creatives, and one or two crew members.

The trip is expected to happen in 2023, although the exact schedule has not been disclosed.

The Japanese tycoon said he received applications from more than 1 million people from all around the world for the dearMoon mission, and that the chosen few have been through a ‘strict screening and selection process’.

‘I had deep conversations with each candidate, asking them about their childhood, why they are dreaming about going to space, what kind of challenges they would like to undertake,’ he said.

‘There isn’t a set task for each of them, but I hope each and everyone will recognize the responsibility that comes with leaving the Earth, travelling to the moon and back in seven days.

‘They will gain a lot from this experience, and I hope they will use that to contribute to the planet, to humanity.’

The spaceship will not make a lunar landing but is expected to come within 120 miles (200 kilometers) of the moon’s surface while circling it for three days.

The trip is officially scheduled for next year, though the exact schedule has not been disclosed – and it may be facing delays due to ongoing tests of the spacecraft and its rockets.

Maezawa made the announcement on his Twitter and the dearMoon project website on Thursday evening, a year to the day since he blasted off to the ISS. 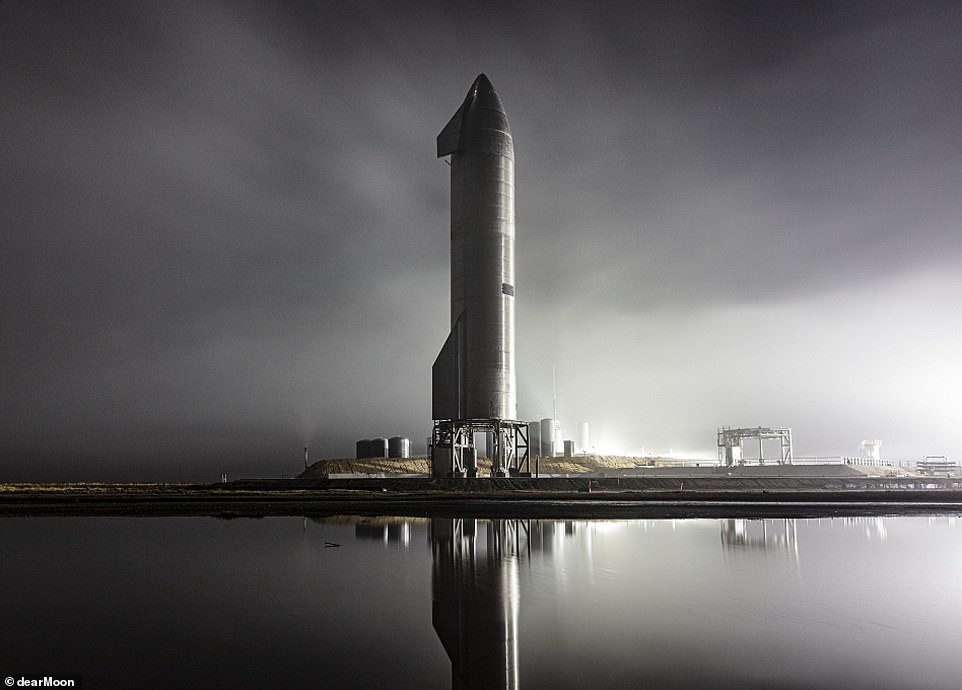 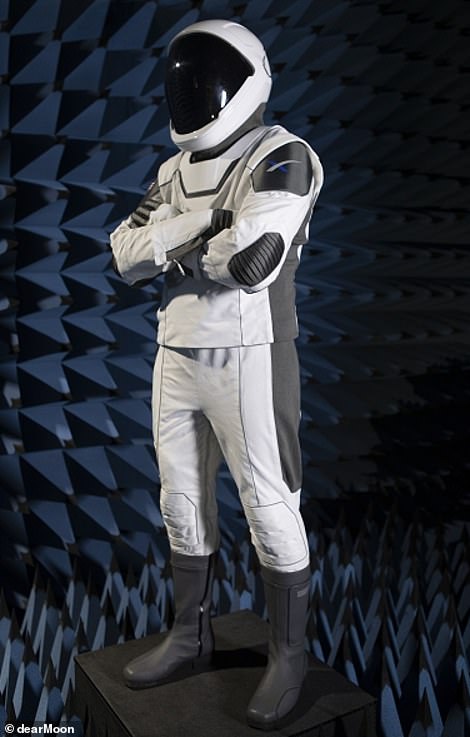 The dearMoon project has also revealed the specially-created spacesuits to be worn by the crew, designed in-house by SpaceX

He tweeted last week that he had held an online meeting with Elon Musk and that his ‘major announcement about space’ was underway.

He and the others will be among the first to travel on the Starship vehicle, which has long been under development at SpaceX.

SpaceX is planning to carry humans using a two-stage spacecraft composed of Starship (the passenger-carrying section) and the Super Heavy rocket booster.

The firm still has work to do on construction of the $216 million Starship, previously known as ‘BFR’, although it has been testing out launching Starship prototypes into the air and landing them.

These launches have had various degrees of success, with some exploding in a chaotic ball of flames.

A full-scale orbital test flight of the rocket is still yet to take place, despite Musk saying a year ago that it would likely happen in 2022.

The dearMoon project has also revealed the specially-created spacesuits to be worn by the crew, designed in-house by SpaceX.

The dearMoon website says: ‘Each custom-tailored suit is meant to provide a pressurized environment for all crew members aboard Dragon in atypical situations such as cabin depressurization.

‘This suit also routes communications and cooling systems to the astronauts aboard during regular flight.’ 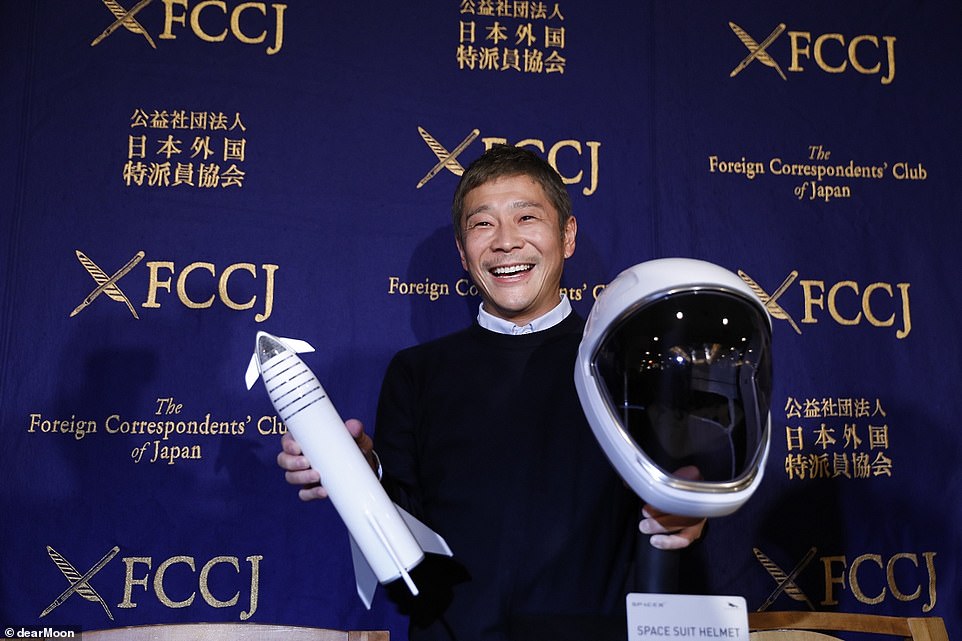 The Japanese tycoon said he received applications from more than 1 million people from all around the world for the dearMoon mission, and that the chosen few have been through a ‘strict screening and selection process’

In 2019, he resigned as CEO of the e-commerce company Zozo Inc to devote his time to space travel.

Like fellow billionaire Musk, Maezawa has a flare for promotion and an infatuation with Twitter – he has boasted to holding the Guinness world record for the most retweeted post, when he offered a cash prize of 1 million yen ($7,300) to 100 winners for retweeting it.

Who is Yusaku Maezawa?

Yusaku Maezawa is a Japanese billionaire entrepreneur and art collector.

The company was listed on the TSE Mothers in December 2007 and on the TSE First Section in February 2012, and its market capitalization exceeded 1 trillion yen in August 2017. 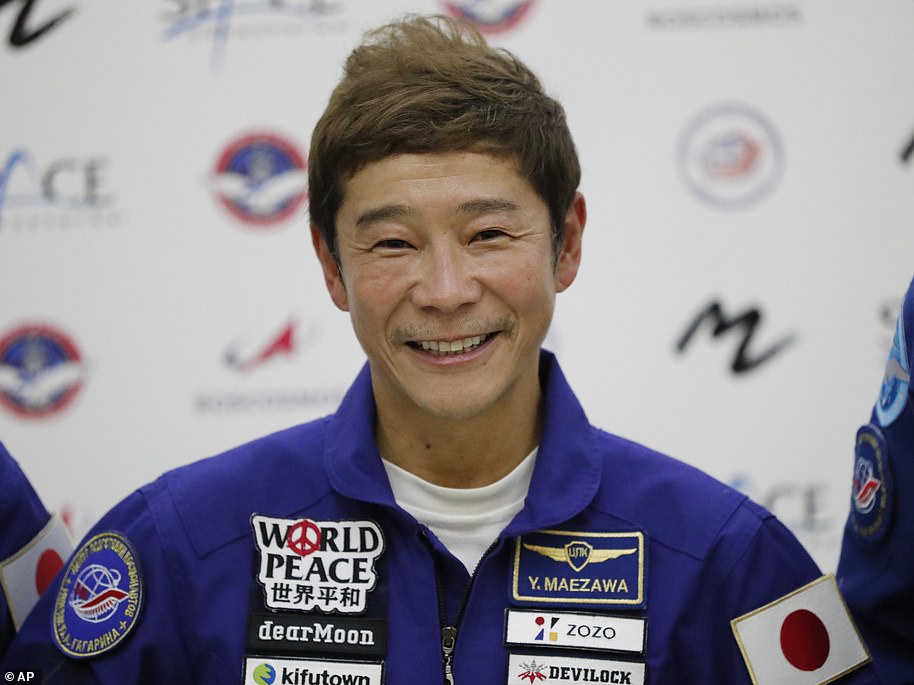 In September 2019, Maezawa stepped down as CEO at the same time as the company released its capital and business alliance with Yahoo Japan Corporation.

Immediately after, he established Start Today Inc., and in 2021, he started thirteen of his own businesses, including his own company’s business.

In December 2021, he became the first Japanese civilian to visit the ISS, spending about 12 days on board.

Maezawa launched plans for the civilian lunar voyage aboard SpaceX’s Starship in 2018, buying all the seats on the spaceship.

Accompanying him will be eight artists from around the world, including South Korean K-Pop star TOP, Indian TV actor Dev Joshi and British photographer Rhiannon Adam.