Did you see it? Last blood moon until 2025 rises over United States skies on morning of consequential Election Day

Early risers in the US awoke to a stunning cosmic display of a reddish hued moon hanging in the dark sky on Tuesday morning.

Known as blood moon, it occurs when Earth’s shadow cloaks the moon and blocks reflection of all direct sunlight – this caused the moon’s color to dim and turn a coppery red.

Peak totality – the stage of the eclipse where the moon is entirely in Earth’s shadow – occurred around 5:00 am ET and the large, red moon was seen over New York City, Washington DC, Virginia and other parts of the US until it returned to its silvery color about two hours later.

Tuesday’s event marks the second blood moon this year, following one in mid-May, and the next one is not expected until March 14, 2025. 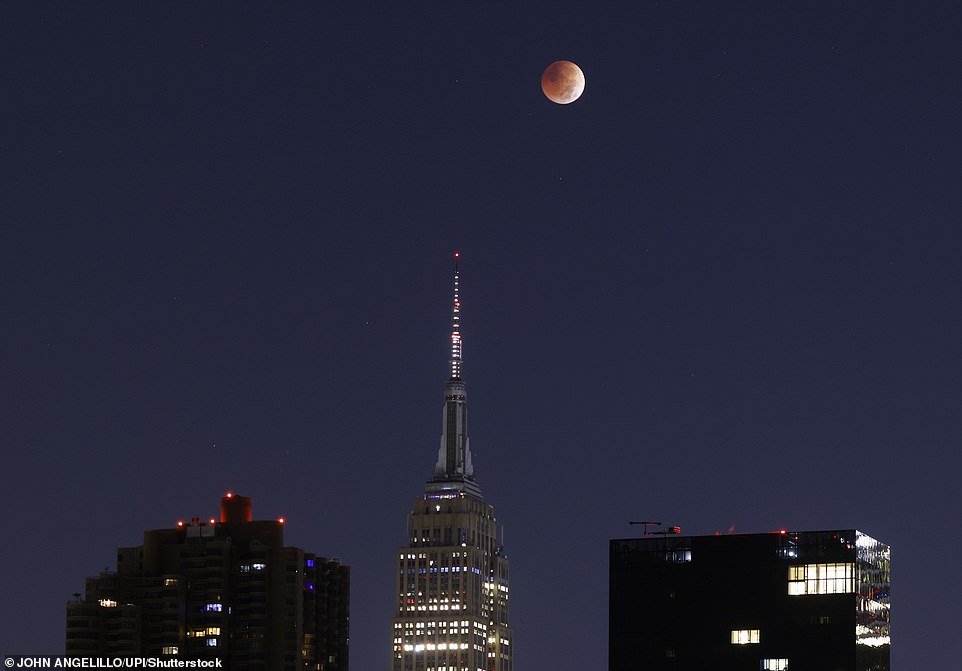 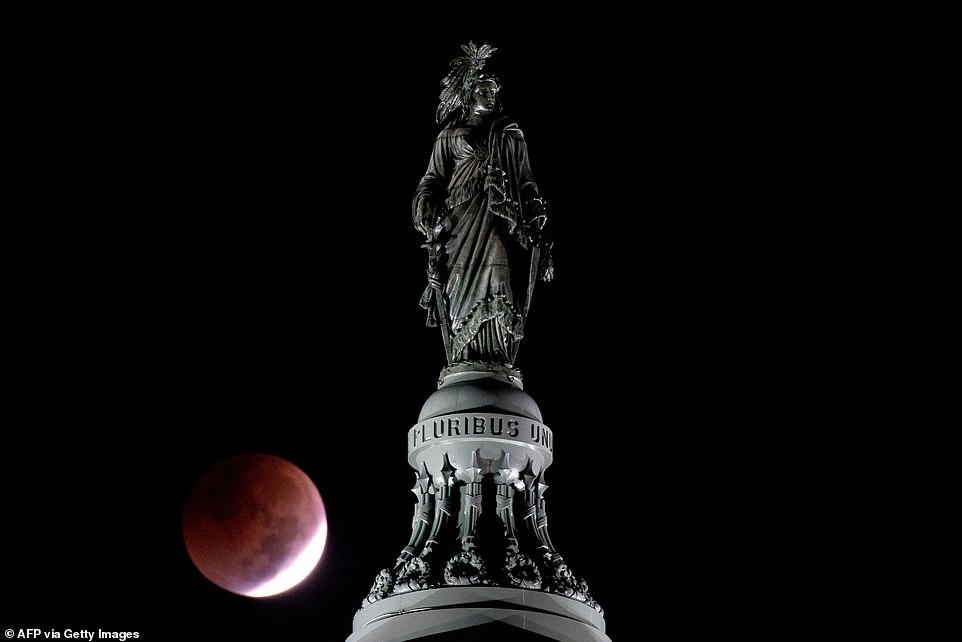 A blood moon occurs when Earth’s shadow cloaks the moon and blocks reflection of all direct sunlight – this caused the moon’s color to dim and turn a coppery red. A stunning image of the moon starting to set behind the Statue of Freedom on top of the US Capitol dome in Washington DC 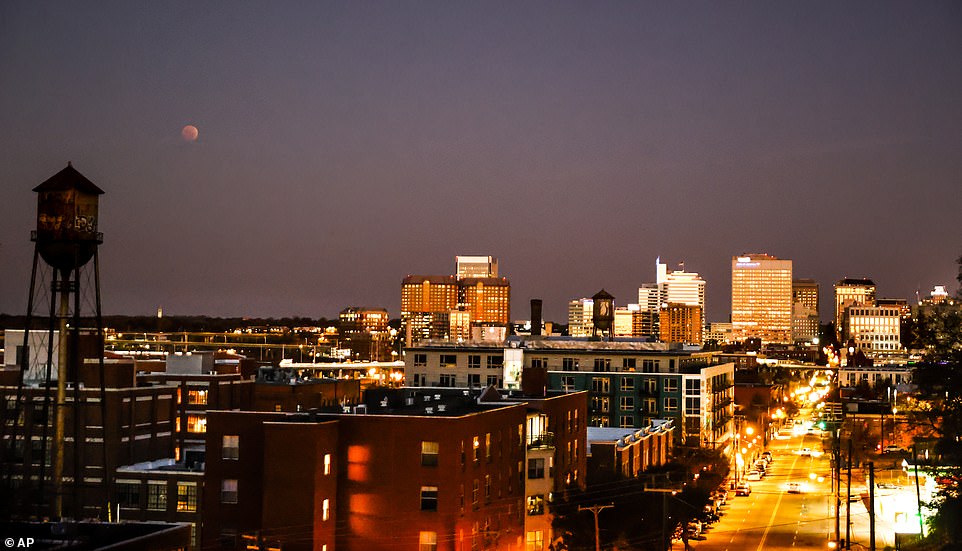 The show was visible across the US in the early morning hours. Pictured is the red moon hanging above Richmond, Virginia

The eclipse was also visible across eastern Asia, Australia, the Pacific, South American and all of North America.

Skywatchers in Asia and Australia saw it with their evening moonrise, while the spectacle played out for observers in other parts of North America in the early morning hours before the moon set.

And it was visible to the naked eye wherever skies were clear in those regions.

The entire eclipse unfolded over a period of nearly six hours as the moon gradually edged into the Earth’s paler, outer shadow, its ‘penumbra,’ then entered the Earth’s darker, inner shadow, or ‘umbra,’ before reaching totality and eventually emerging from the other side. 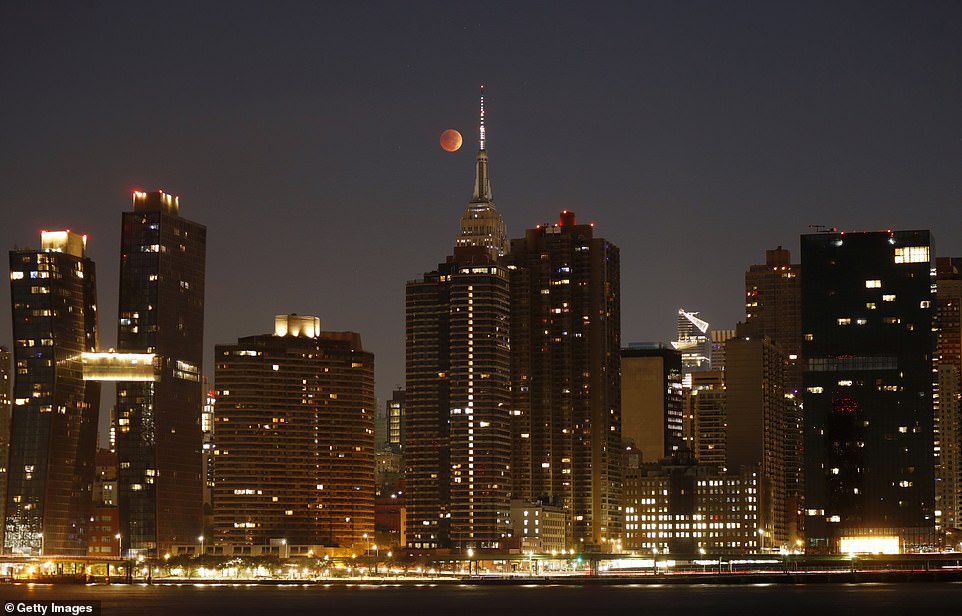 The blood moon was full for about 90 minutes before transforming back to its silvery color. Here it is passing behind the Empire State building in New York City 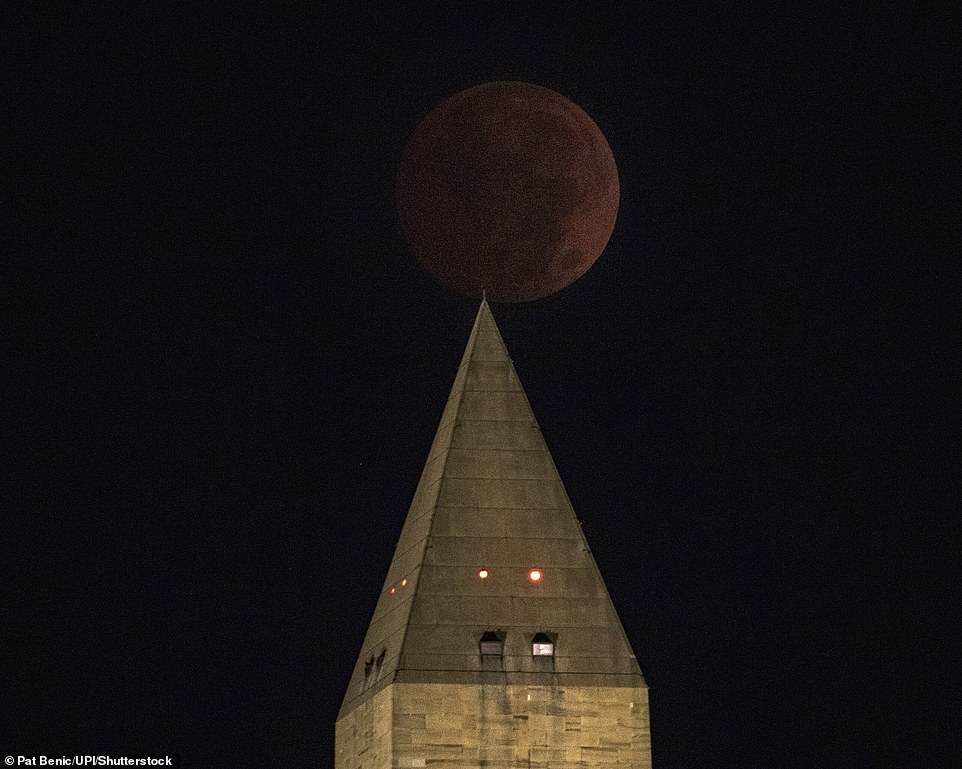 The moon darkens and is reddish during a total lunar eclipse in the sky. Here it is next to the Washington Monument in Washington DC 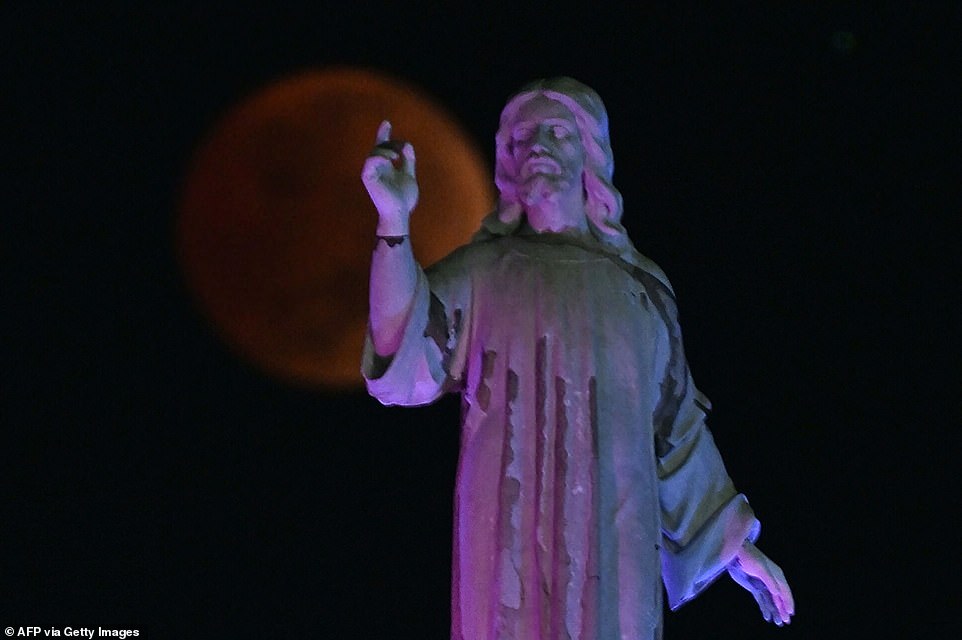 The eclipse was also visible across eastern Asia, Australia, the Pacific, South American and all of North America. This captivating image shows the total lunar eclipse past the Savior of the World monument in Salvador del Mundo Square, in San Salvador 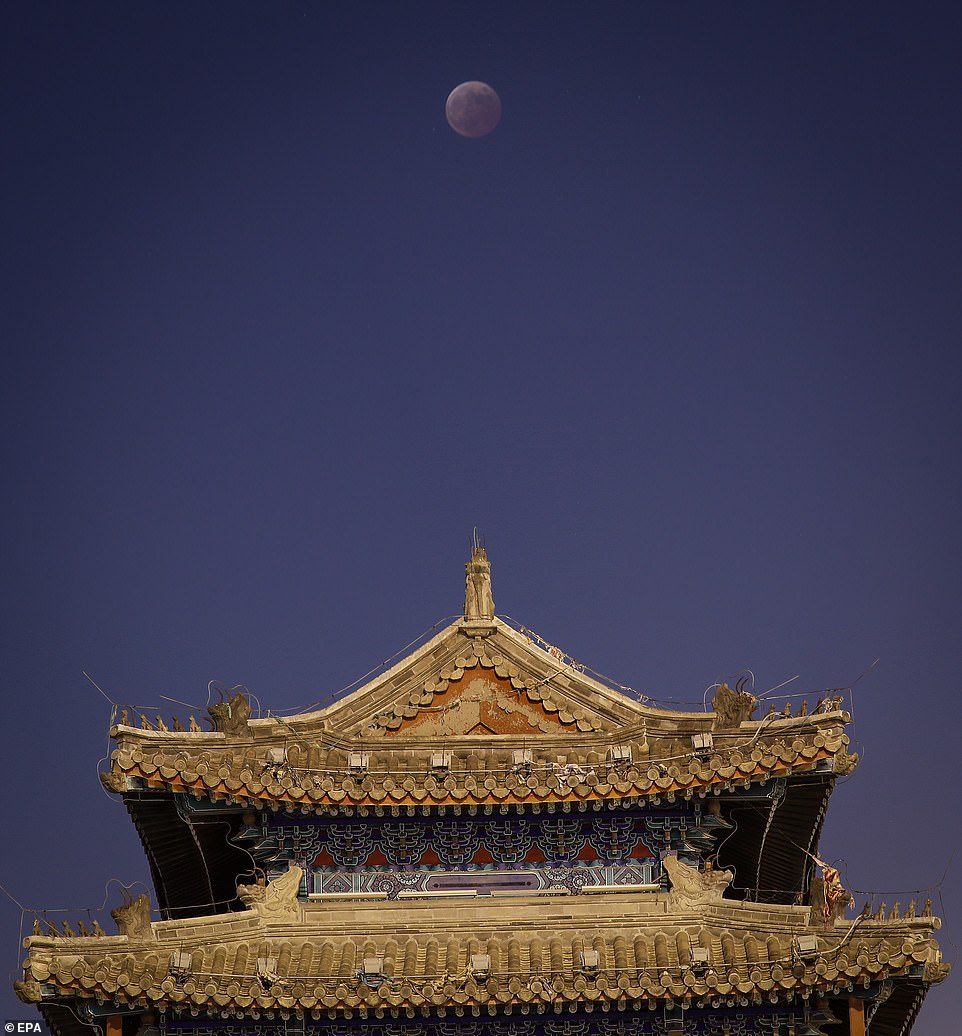 People in China were also able to experience the breathtaking show. Here is the moon rising over the Yongdingmen Gate Tower during a total lunar eclipse in Beijing

NASA said the moon was 242,740 miles from Earth during this lunar event that lasted for about 90 minutes.

Those living on the east coast of the US were graced with totality toward the northwestern horizon from about 5:16 am ET to 6:41 am ET.

People in the Midwest saw the blood moon peak at 3:16 am ET through 4:41 am ET and those on the west coast experienced the full reddish hue at 3:02 am ET, which also lasted for one and a half hours.

Andrew Fraknoi, an astronomer at the University of San Francisco, told The New York Times: ‘The big issue here will be that it’s before Election Day.

‘I joke around that many people are so nervous about Election Day this year that maybe they’ll be up all night, and they can watch it.’ 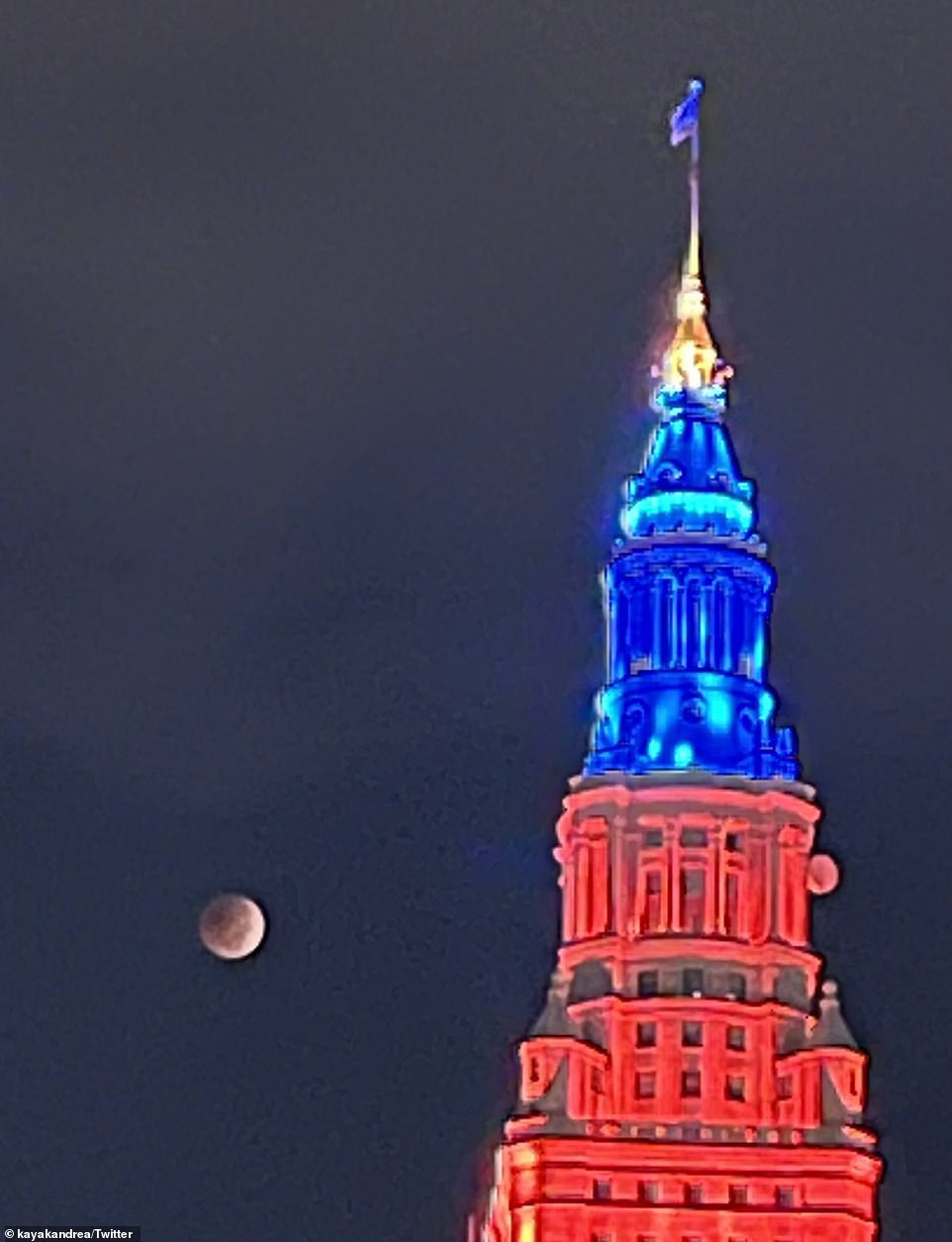 Those living on the east coast of the US were graced with totality toward the northwestern horizon from about 5:16 am ET to 6:41 am ET. This image shows the moon glowing in the background of Cleveland, Ohio 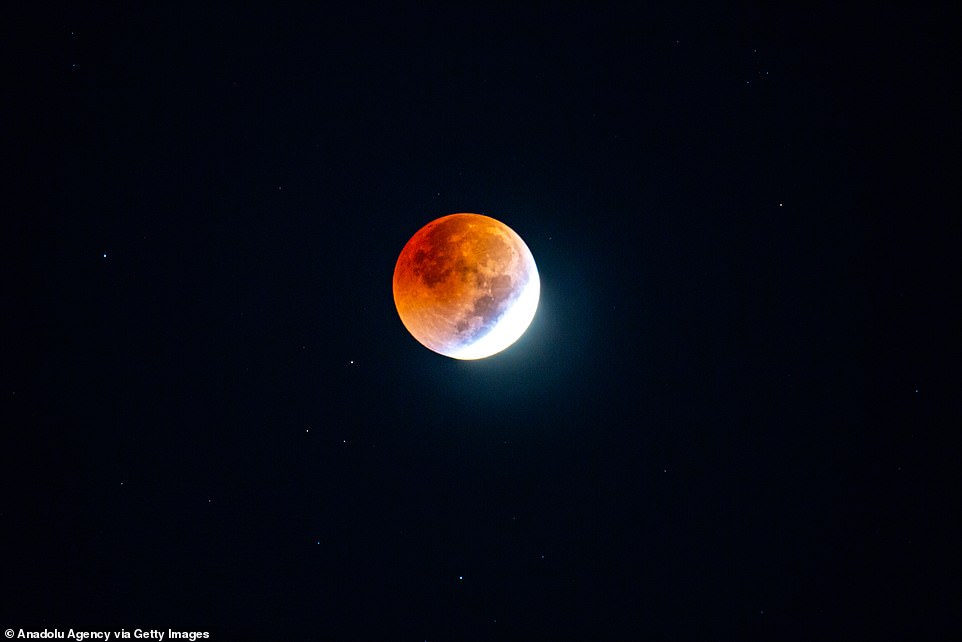 The blood moon and last total lunar eclipse until 2025 moves across the sky in the early morning hours over Hull, Massachusetts. This image captured the different hues of red and orange glowing from the lunar surface

Blood moon happens when the moon is shrouded in Earth’s shadow, blocking direct sunlight from the lunar surface

A lunar eclipse occurs when the moon passes in the shadow of Earth. This is an area known as the umbra, where light from the sun is blocked by our planet.

The light refracts differently in the atmosphere and, as it hits the moon, it appears red.

This gives rise to its ‘blood red’ appearance during a total eclipse, when the entire moon is in shadow. If it skirts the shadow, known as a partial or penumbral eclipse, the effect is less dramatic.

When the moon first enters the Earth’s partial shadow, know as the penumbra, a dark shadow begins to creep across the moon.

This gives the illusion that the moon is changing phases in a matter of minutes instead of weeks.

At the eclipse’s peak, the moon enters the Earth’s full shadow; the umbra.

At this stage, the Earth’s atmosphere scatters the sun’s red visible light; the same process that turns the sky red at sunset.

As a result, the red light reflects off the moon’s surface, casting a reddish rust hue over it.

The claim of a blood moon being a sign of the beginning of the end times originates in the Book of Joel, where it is written ‘the sun will turn into darkness, and the moon into blood, before the great and terrible day of the Lord comes.’

The blood moon that appeared in 2015 sparked fear among some religious leaders who believed that would be the last one the world would see.

Most of these leaders headed the Church of Jesus Christ of Latter-day Saints and feared the event meant the end of the world was near.

The Mormon Church told its 15 million followers to be ‘spiritually and physically prepared for life’s ups and downs’ but warned people not to speculate about when Doomsday would be.

The apocalypse is a key part of Mormon religion and many of its members prepare their homes with extra food and water in case of any disaster.

The lunar eclipse that occurred September 27 and 28, 2015 was the fourth in two years and all of them have fallen on Jewish holy days.

Christian Pastor John Hagee said in 2015 that this sequence, known as a ‘tetrad’, could be a sign of the Old Testament prophecy predicting the end of the world.

His beliefs are based on a passage from the Bible that says: ‘The sun shall be turned into darkness, and the moon into blood, before the great and the terrible day of the Lord comes.’

In 1493, the first Tetrad saw the expulsion of Jews by the Catholic Spanish Inquisition.

The second happened in 1949, right after the State of Israel was founded and the most recent one – in 1967 – happened during the Six-Day War between Arabs and Israelis.

In his book, Hagee says: ‘The heavens are God’s billboard.

‘He’s been sending signals to Earth, and we haven’t been picking them up. Two blood moons, in 2014 and 2015, point to dramatic events in the Middle East and, as a result, changes in the whole world.’

However, the world did not end and was around to see the latest blood moon Tuesday morning.

The Incas believed the deep red coloring was due to a jaguar attacking and feasting on the moon, fearing the creature would soon make its way to eat Earth, The Independent reports.

During this time, people would shout, shake their spears and make their dogs bark and howl, hoping to make enough noise to drive the beast away.

And in ancient Mesopotamia, a lunar eclipse was considered a direct assault on the king.

Some Hindu folktales interpret lunar eclipses as the result of the demon Rahu drinking the elixir of immortality. 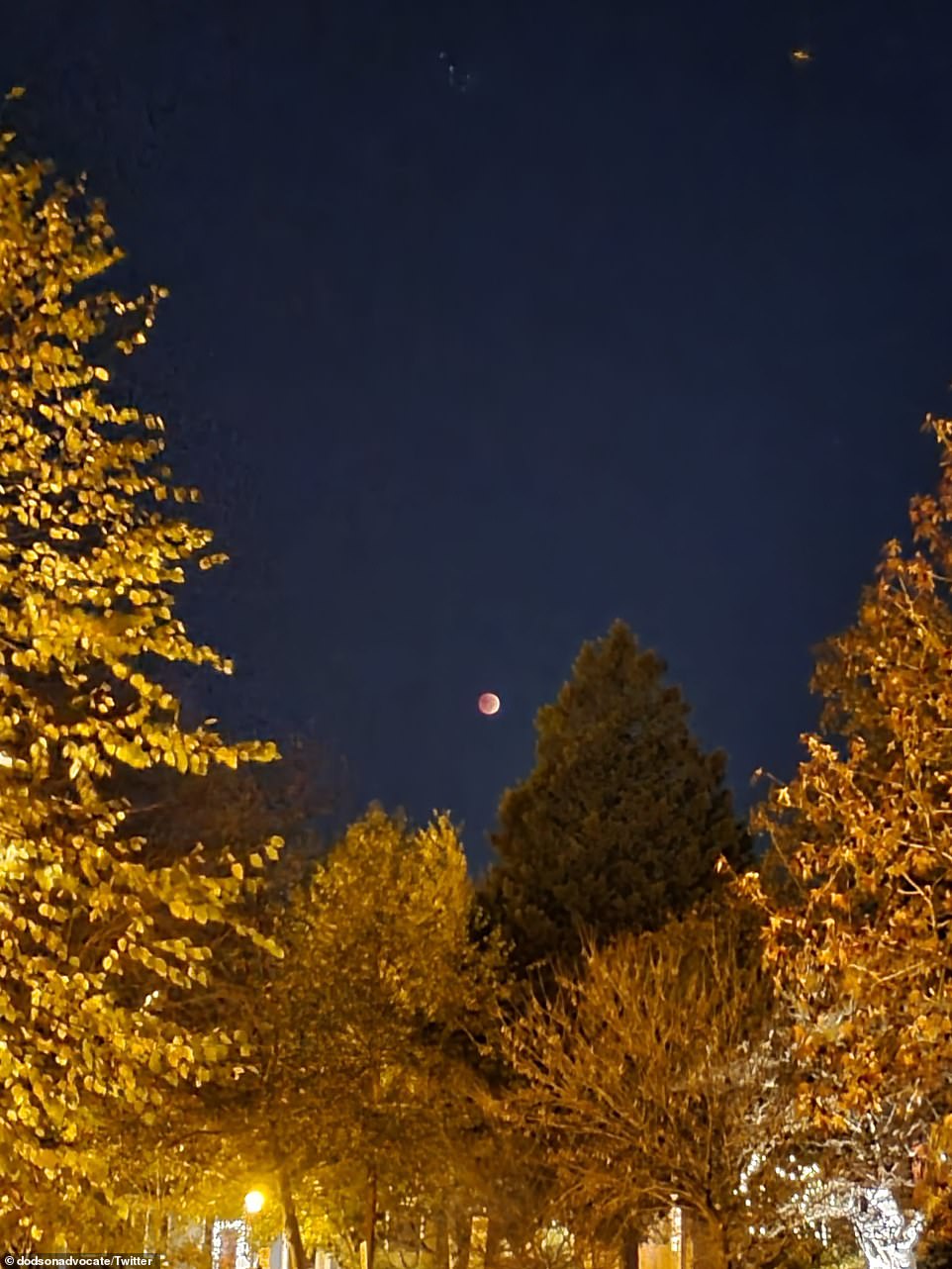 People living in Washington DC had a front row seat to the blood moon display. It appeared shortly before polls opened on Election Day 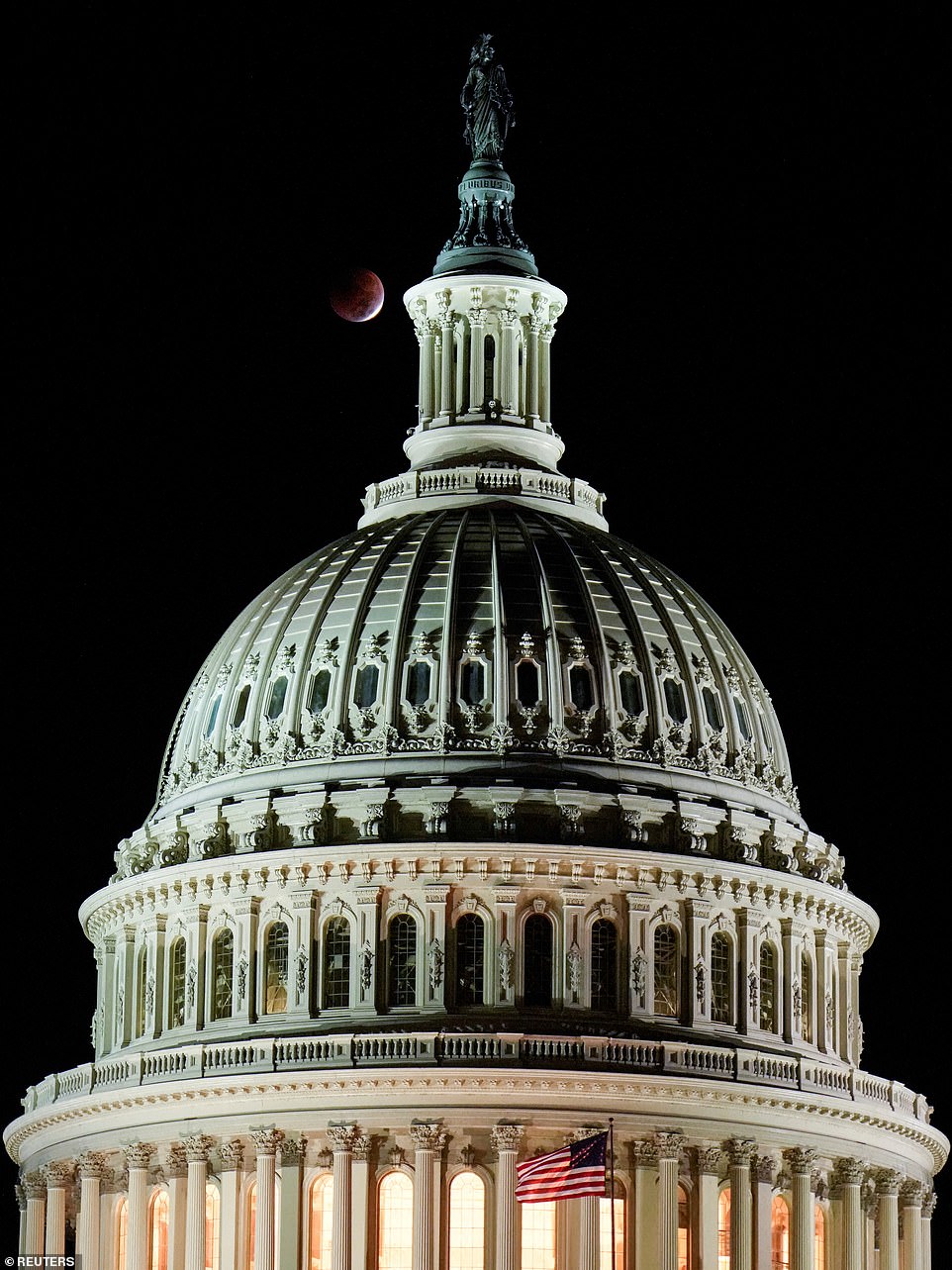 This incredible image highlights the importance of this blood moon, as Americans were waking early to stand in line to vote in the Mid-term elections 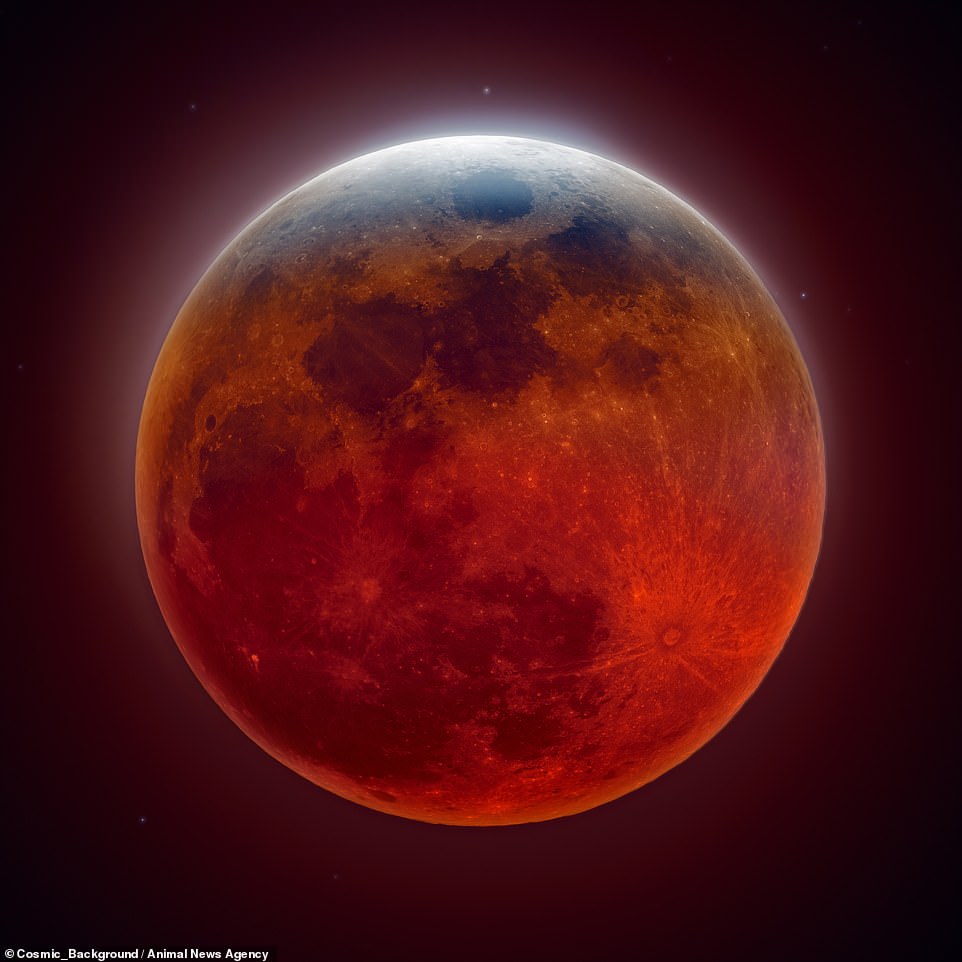 This image was snapped in an Arizona resident’s backyard, who captured it in huge resolution. This picked up every detail of the lunar surface, including craters left by meteor impacts 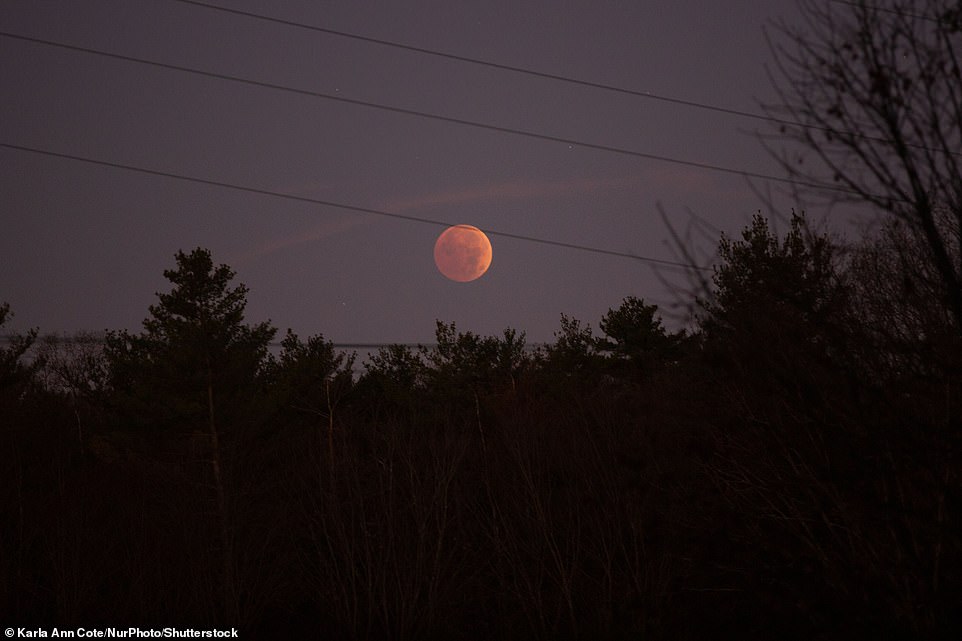 The lunar eclipse has had different means throughout history. Native Americans believed the red glow meant the moon was sick. This view is from this morning in Albany, New York

And for many people in India today, the blood moon comes with ill fortunes.

During a lunar eclipse, Indians cover food and water as they perform rituals to ward off evil intentions.

However, Native American tribes in the US thought the red-colored hue meant the moon was sick.

Hupa and Luiseño would serenade the moon, hoping to heal it.