Last year was Earth’s fifth hottest on record: Average temperatures across the globe were 2.16°F higher than the pre-Industrial Revolution average, data shows

2022 is continuing to break heat records, according to worrying findings from the European Union’s climate change monitor.

Meanwhile, summer 2022 was Europe’s hottest summer on record, typified by prolonged and intense heatwaves, especially in the continent’s north and west. 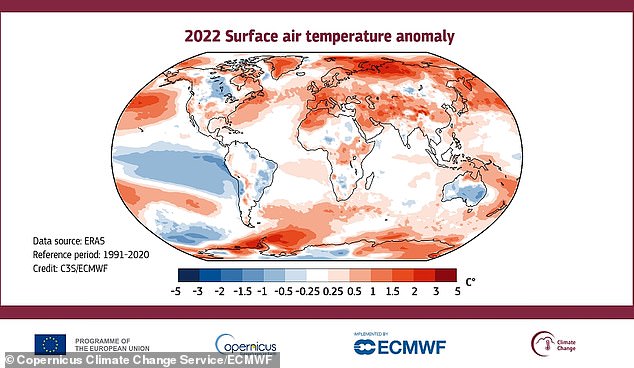 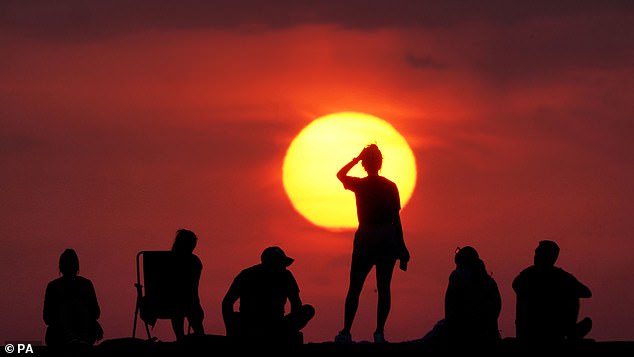 According to C3S experts, temperatures pushed past the average the most in the western part of the continent, including the UK, which saw its hottest ever recorded temperature. Pictured are Brits in North Tyneside on July 19, 2022, the hottest day of the year

2022 was also the eighth year in a row of global temperatures more than 1.8°F (1°C) above the pre-industrial level.

What’s more, the last eight years have been the eight warmest on record globally.

The new data is presented in C3S’s ‘2022 Global Climate Highlights’ report, which was published on Tuesday morning.

‘2022 was yet another year of climate extremes across Europe and globally,’ said Samantha Burgess, deputy director of C3S.

‘The latest 2022 Climate Highlights from C3S provides clear evidence that avoiding the worst consequences will require society to both urgently reduce carbon emissions and swiftly adapt to the changing climate.’

Last year, the world experienced its fifth warmest year on record ‘only by a very small margin’, the C3S experts note, adding that other datasets could rank it differently. 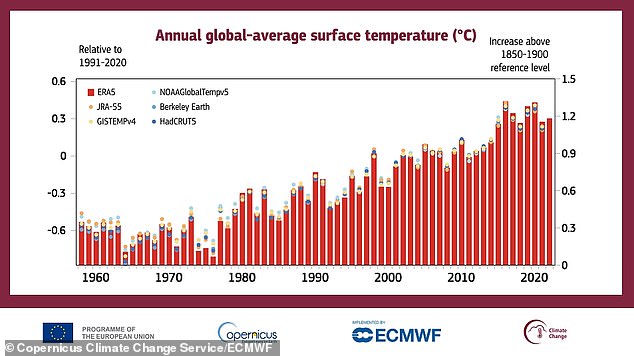 Graph shows annual averages of the estimated global surface temperature in Celsius above the reference levels for 1991-2020 (left-hand axis) and 1850-1900 (right-hand axis). Results from other datasets (including the Met Office’s HadCRUT5, NASA’s Gistemp and Berkeley Earth from the non-profit of the same name) are marked for comparison 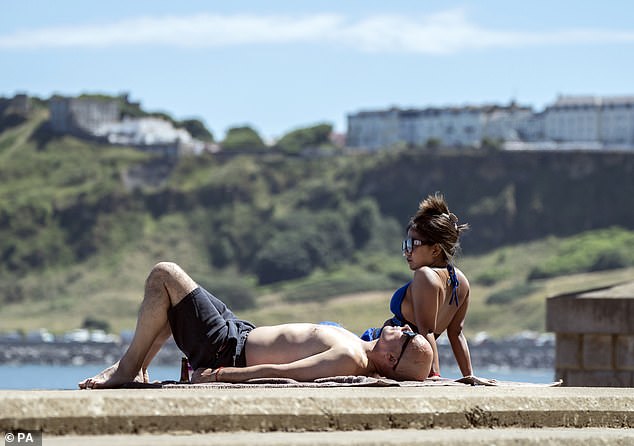 People baking in the warm weather on Scarborough beach, North Yorkshire on July 10 during the UK’s epic heatwave

Hottest years on record in Europe

CS3 reflected on the extreme weather events seen across the world, including record-breaking rainfall and flooding in Pakistan, drought in China and unusually low sea ice in the Antarctic.

‘These events highlight that we are already experiencing the devastating consequences of our warming world,’ said Burgess.

Meanwhile, looking solely at temperatures in Europe, 2022 was the second warmest on record, behind 2020.

According to the experts, temperatures pushed past the average the most in the western part of the continent, including the UK, which saw its hottest ever recorded temperature.

Winter temperatures in 2022 were around 1.8°F (1°C) above average, ranking amongst the 10 warmest winters, leading in part to a lack of snow for skiers this season. 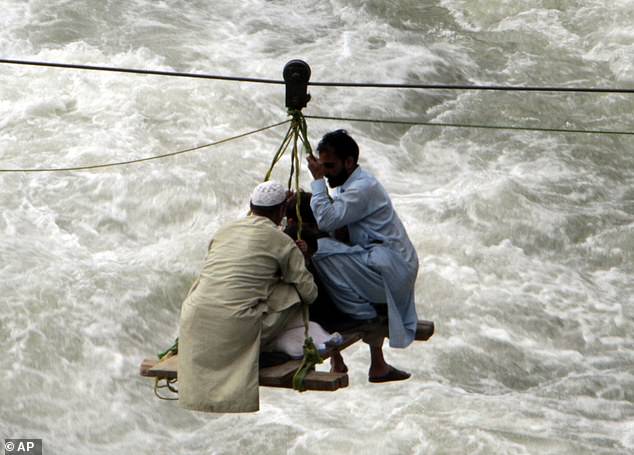 CS3 reflected on the extreme weather events saw across the world, including record-breaking rainfall and flooding in Pakistan (pictured)

Satellite imagery shows the effect of Europe’s ‘winter heatwave’ in the thick of the continent’s winter skiing season.

An image posted by the European Union’s Copernicus Programme shows a distinct lack of snow surrounding the Swiss town of Altdorf, which is close to skiing resorts.

Unfortunately, greenhouse gases continued to rise in 2022, according to data from the Copernicus Atmosphere Monitoring Service (CAMS), which is also part of the Copernicus Programme and tracks atmospheric composition.

‘Greenhouse gases, including carbon dioxide and methane, are the main drivers of climate change and we can see from our monitoring activities that atmospheric concentrations are continuing to rise with no signs of slowing,’ said Vincent-Henri Peuch, director of CAMS.

‘Concentration changes are the result of both human and natural factors.

‘Our ongoing efforts towards an operational verification support capacity of CO2 and CH4 emissions will provide immensely useful tools to assess more specifically the effectiveness of climate change mitigation measures.’ 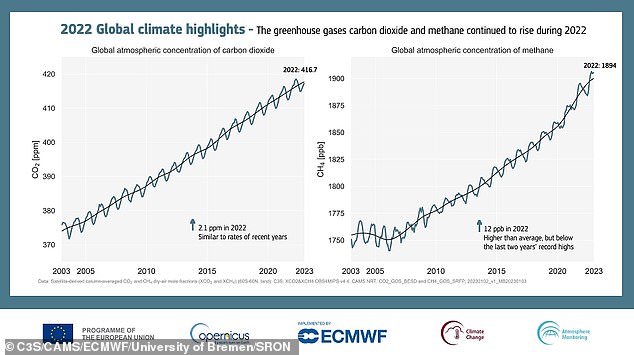 Met Office blamed the ‘persistence of warmer than average conditions’ throughout the year, while the record-breaking heat waves in July also bumped up the average.

In December, the Met Office also said 2023 will be one of Earth’s hottest years on record globally.

2023 will be even WARMER than last year – and could even be one of the hottest years on record, Met Office forecasts

2023 is forecast to be the 10th consecutive year in which global temperatures will be at least 1.8°F (1°C) above pre-industrial levels, the Met Office has said.

Met Office researchers said 2023 could one of the Earth’s hottest years on record, although it’s unlikely to top a record set six years ago.

In 2016, global temperatures were 2.3°F (1.28C) above pre-industrial levels – a figure that’s been consistently high ever since. 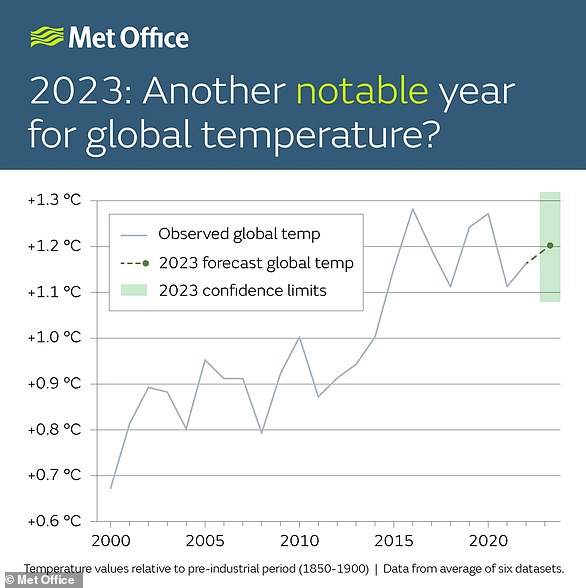 Met Office researchers claim 2023 could still be one of the Earth’s hottest years on record, partly due to the absence of the cooling ‘La Niña’ weather pattern.

La Niña – Spanish for ‘the girl’ – occurs when stronger equatorial winds, blowing east to west, lower the sea surface temperature across the eastern equatorial part of the central Pacific Ocean.