Look up this week! Leonids meteor shower will peak on Wednesday night with up to 15 shooting stars every hour

The Leonids meteor shower will peak on Wednesday night — with up to 15 shooting stars potentially visible each hour through to dawn on Thursday — experts have said.

The spectacle, which happens every November, occurs when small rocks burn up in Earth’s atmosphere after breaking off from a comet called 55P/Tempel–Tuttle.

According to NASA, the Leonids are considered to be some of the fastest meteors known, travelling at speeds of 44 miles (71 kilometres) per second.

The annual shower takes it name from the fact that their radiant — the point in the sky from which they appear to originate — lies within the constellation of Leo.

Unfortunately for stargazers, conditions are expected to by fairly cloudy and changeable from Wednesday–Friday, the Met Office forecast has predicted.

The north is expected to experience spells of showers and bouts of wind, while the south of the UK will be largely dry, but with variable cloud that could spoil the view. 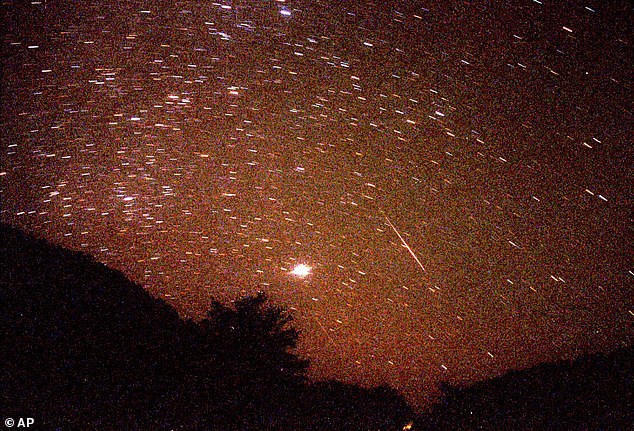 The Leonids meteor shower will peak on Wednesday night — with up to 15 shooting stars potentially visible each hour through to dawn on Thursday. Pictured: the Leonids in 1998

The Leonids are usually one of the more prolific annual meteor showers, with fast, bright meteors associated with Comet 55P/Tempel–Tuttle.

The radiant (the point where the meteors seem to stream from) is at the head or ‘sickle’ of the constellation Leo the Lion, hence the name.

As the comet follows its path around the sun, it leaves a path of tiny debris.

The cometary debris enters our planet’s atmosphere at speeds of up to 43 miles (70 km) per second, vaporising and causing streaks of light.

Weather permitting, the best possible views of Wednesday’s peak will come in places with clear skies and far from sources of light pollution like big cities.

There is no advantage to using binoculars or a telescope — observers merely need to look up unaided and take in the widest possible view of the sky.

According to the Met Office, during the early hours of Wednesday, the north of the UK may see a mixture of cloud and rain and ‘perhaps some clear spells’.

‘The south will be drier but may also be fairly cloudy with some fog patches around,’ Met Office senior meteorologist Greg Dewhurst told MailOnline last week.

Meteors — also known as ‘shooting stars’ — are typically either bits of asteroids leftover from the formation of the solar system or, as in the case of the Leonids, material ejected from the disintegration of a comet as it passes near the Sun.

Every year the Earth passes through these debris trails, resulting in material entering our atmosphere where they burn up, creating fiery and colourful streaks in the sky.

55P/Tempel–Tuttle, the comet from which the Leonids originate, takes 33 years to complete one of its elongated orbits around the Sun.

Meteor showers are best seen with a good, clear view of the stars on a night with no clouds.

Make sure there are no direct sources of light in your eyes, so that you can fully adapt to the local conditions and ensure that fainter meteors become visible.

There’s no advantage to using binoculars or a telescope; just look up with your own eyes to take in the widest possible view of the sky.

The nucleus of 55P/Tempel–Tuttle is relatively small, measuring only about 2.2 miles (3.6 kilometres) across — comparable in size to the island of Manhattan in New York.

Its debris fragments burn up and vaporise before they hit the Earth’s surface — causing a streak of hot air which we see as a ‘shooting star’.

These beautiful streaks seen in the night sky can be caused by cosmic particles that are as small as a grain of sand.

‘This is because, although meteors appear all over the sky, they all appear to emerge or radiate from a single point that lies within this constellation.’

Stargazers who miss the shower’s peak may still be able to catch the display in the following days — albeit at a reduced rate of meteors each hour.

‘On Wednesday night, the radiant (the easiest region to see them) will be rising a little after 10pm here in the UK,’ said Ms Gammon-Ross.

‘So the early hours of the morning will be the best time to look out for this shower, when Leo is nice and high in the sky.’ 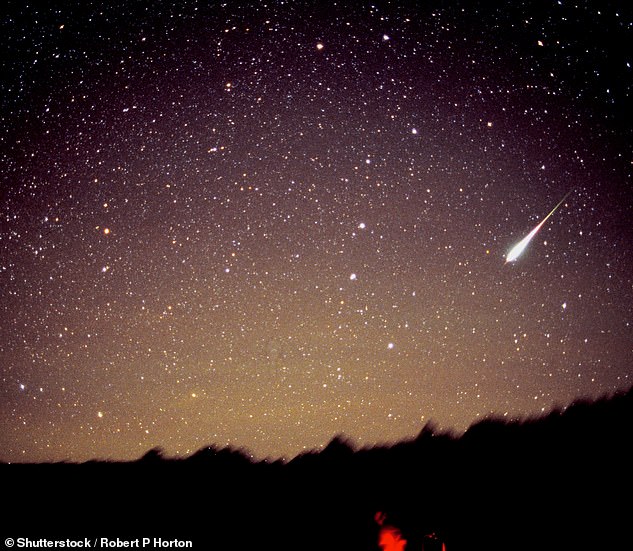 According to NASA, the Leonids are some of the fastest meteors known, travelling at speeds of 44 miles (71 kilometres) per second. Pictured: the Leonids over New Mexico, 1998

Every 33 years, when 55P/Tempel–Tuttle is closer to the Earth, stargazers can experience a Leonid ‘storm’ — one that peaks with hundreds-to-thousands of meteors per hour, depending on location.

‘Viewers in 1966 experienced a spectacular Leonid storm — thousands of meteors per minute fell through Earth’s atmosphere during a 15 minute period,’ said NASA.

‘There were so many meteors seen that they appeared to fall like rain. The last Leonid meteor storm took place in 2002.’

The next such Leonid storm is due in 15 years time.

Leonids, meteor, Peak, shower, to
You may also like: