Dogs living in London are more likely to suffer from HEATSTROKE due to being confined in stuffy flats and terraced houses, study warns

Dogs living in London are more likely to suffer from heatstroke than elsewhere in the UK because they are often confined in stuffy flats and terraced houses, a new study has warned.

With summer approaching, owners are being told to look out for the early signs of the potentially fatal condition in their pets.

These include excessive panting, red or darkened gums and tongue, confusion and unsteadiness leading to collapse, diarrhoea, vomiting and even seizure leading to coma.

If the dog is not cooled immediately, owners should contact a vet.

Researchers found that dogs in the capital had up to double the chance of getting heat-related illness than in some other regions.

The study suggests flats and terraced housing are associated with an increased risk of overheating, and that a greater percentage of cases in London were triggered by confinement in a hot building. 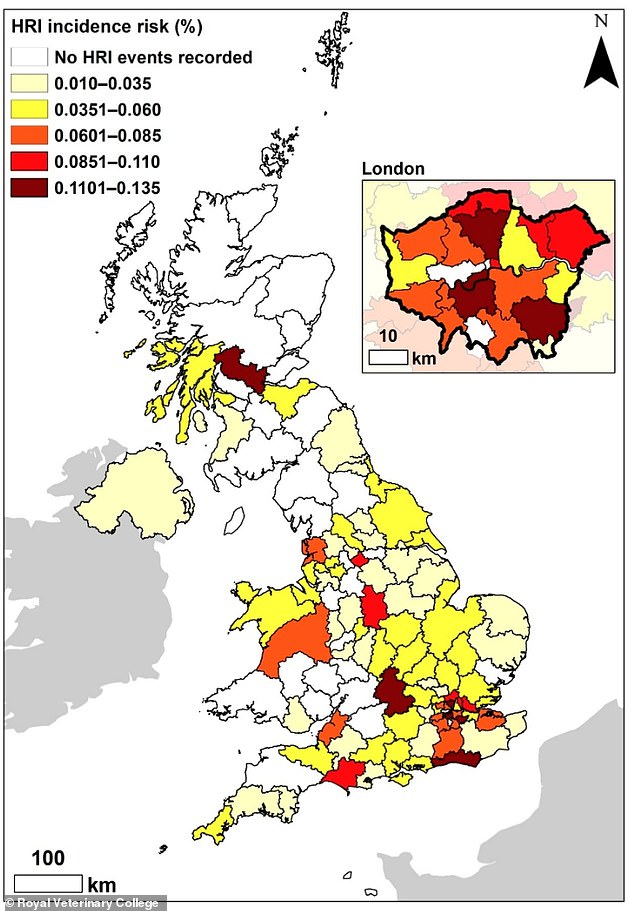 Warning: Dogs living in London are more likely to suffer from heatstroke than elsewhere in the UK, a new study has found. The risk for those in the capital was double that found in Yorkshire, and almost double that in the North West and East of England (shown on the graphic above) 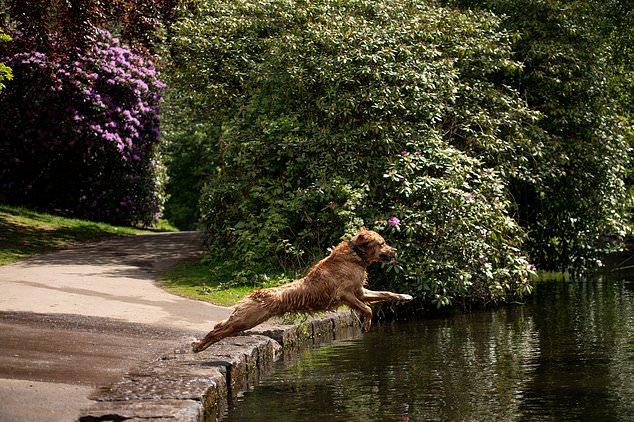 As summer approaches, owners are being warned to look out for early signs of heatstroke 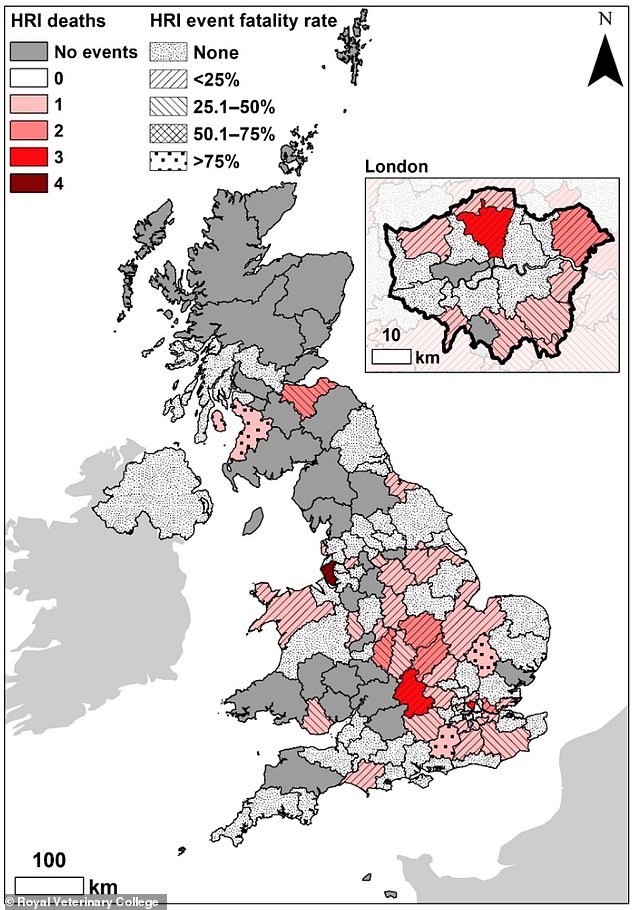 THE EARLY SIGNS OF HEAT STROKE TO LOOK OUT FOR

With summer approaching, owners are being warned to look out for the early signs of the potentially fatal condition in their pets.

If the dog is not cooled immediately, owners should contact a vet.

Across the UK, older and heavier dogs were found to be most at risk of developing severe heatstroke, while older dogs and flat-faced breeds such as pugs and bulldogs were at most risk of dying.

Nottingham Trent University and the Royal Veterinary College researchers were surprised to find that the average temperature in which dogs became ill from heatstroke was 62.4°F (16.9°C).

This is much lower than previously thought, and busts the myth about dogs only being at high risk for heatstroke in scorching temperatures, the scientists said.

Emily Hall, a veterinary surgeon at the Royal Veterinary College and main author of the paper, said: ‘As global temperatures continue to rise, better understanding of the combined risk factors for heatstroke will support more targeted owner education to improve canine welfare.

‘Whilst the most common trigger overall was exercise, our findings highlight the increased risk of severe and fatal heatstroke associated when dogs cannot escape the heat source or have reduced capacity to thermoregulate, such as older dogs and brachycephalic breeds.

‘Both flats and terraced housing are generally located within the warmest parts of cities and are associated with an increased risk of overheating.

‘Whilst it does not explain all the additional heatstroke events in London, a significantly greater percentage of cases in London were triggered by confinement in a hot building compared to the rest of the UK.’

The researchers looked at risk factors for heatstroke by analysing 2016 vet records of more than 900,000 UK dogs from the VetCompass programme at the Royal Veterinary College.

With their squashed little noses and wrinkled faces, pugs have become a favourite with dog lovers and celebrities.

But a new study has warned that the breed now suffers from such severe health conditions that it can no longer be considered a ‘typical dog’.

Pugs are significantly more likely to suffer from breathing, eye, and skin disorders than other breeds, according to vets from the Royal Veterinary College.

Experts have urged people not to buy pugs in light of the research.

They found that during the single year of the study, 390 dogs needed veterinary care for heatstroke, including 72 in London.

The risk for heatstroke for dogs living in London was double that found in Yorkshire, and almost double that in the North West and East of England.

Looking at the specific triggers behind heatstroke events between 2016 and 2018, the researchers found that exercise was responsible for 68 per cent of heatstroke cases in London and hot weather 14 per cent.

According to the study, dogs that were confined to a hot building accounted for 8 per cent of cases in London, which was more than double that of the wider UK figure of 3 per cent.

Researchers suggest this could be due to a higher proportion of flats than in rural locations, and because the ambient temperature in cities such as London can be about 9°F (5°C) warmer than in the countryside.

Just 1 per cent of heatstroke cases in London were linked to a dog being left in a hot car, compared to 6 per cent nationally.

The researchers urged owners to remember that while dogs do die in hot cars, far more develop heatstroke on hot walks, and for dogs that are older, or flat-faced, even mild heat can be deadly.

Heavier dogs which weighed between 40-50kg (88-110lbs) were at greater risk of developing severe heatstroke, the study also found.

‘Awareness of these extra risks can help owners take steps to protect their dogs, especially as we approach the summer months.’

The study has been published in the journal Veterinary Sciences.

WHAT ARE THE TEN COMMONLY HELD MYTHS ABOUT DOGS?

It is easy to believe that dogs like what we like, but this is not always strictly true.

Here are ten things which people should remember when trying to understand their pets, according to Animal behaviour experts Dr Melissa Starling and Dr Paul McGreevy, from the University of Sydney.

2. Not all dogs like to be hugged or patted

3. A barking dog is not always an aggressive dog

4. Dogs do not like other dogs entering their territory/home

5. Dogs like to be active and don’t need as much relaxation time as humans

6. Not all dogs are overly friendly, some are shyer to begin with

7. A dog that appears friendly can soon become aggressive

9. Sometimes a dog isn’t misbehaving, it simply does not understand what to do or what you want

10. Subtle facial signals often preempt barking or snapping when a dog is unhappy

‘Pyscho’ seagulls dive-bomb family and hold them hostage inside bungalow