Scientists claim to have the solution for health enthusiasts who don’t like to wear an ‘uncomfortable’ smartwatch.

The experts, based at Rice University in Texas, have created a machine-washable smart t-shirt that can monitor your heart.

The carbon nanotube monitors the wearer’s heart rate and takes a continual electrocardiogram (ECG), which captures a heart’s rhythm and electrical activity. 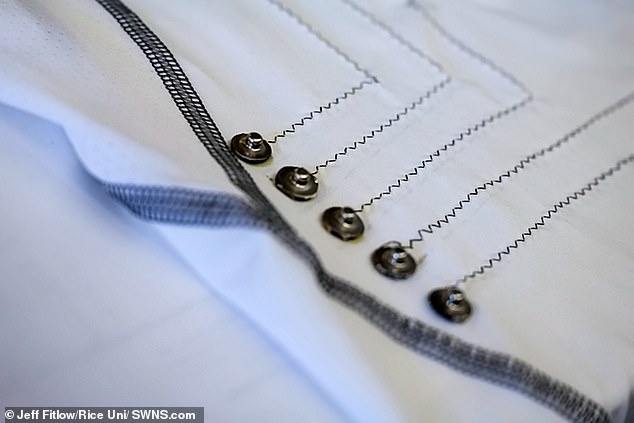 A machine-washable smart t-shirt that monitors your heart has been developed by scientists. It works by taking a continual electrocardiogram of the wearer and was proven in tests to give more accurate results than commercially sold chest-strap monitors

Carbon nanotubes, or CNTs, are cylindrical molecules that consist of rolled-up sheets of single-layer carbon atoms, or graphene.

Nanotube fibres are soft and flexible, and clothing that incorporates them is machine washable.

Fibres woven into fabric can also be used to embed antennas or LEDs, according to the researchers.

‘Because of the combination of conductivity, good contact with the skin, biocompatibility and softness, carbon nanotube threads are a natural component for wearables,’ said engineer Matteo Pasquali at Rice University.

The fibres are just as conductive as metal wires, but washable, comfortable and far less likely to break when a body is in motion, according to the researchers.

In experiments, the shirt onto which they were sewn was better at gathering data than a standard chest-strap monitor taking live measurements.

Waves of the fibres can be sewn onto a piece of stretchable fabric in a zigzag formation to form an electrode, to connect electronics like Bluetooth transmitters to relay data to a smartphone.

The zigzag stitching pattern allows the fabric to stretch without breaking them.

ECGs obtained by the carbon nanotube fibres electrodes were comparable to signals obtained with commercial electrodes, according to the scientists. 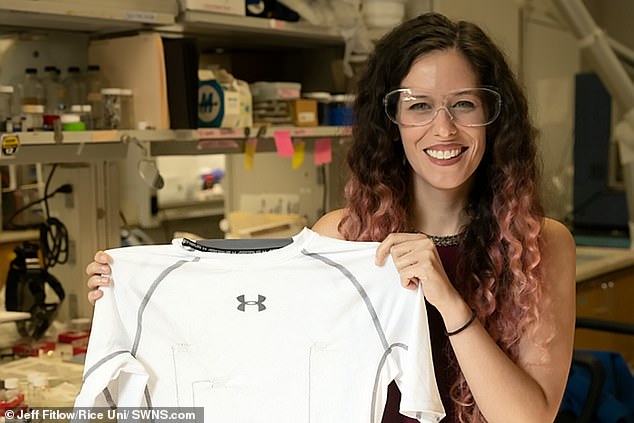 The one proviso is the shirt onto which the fibres are sewn has to be tight-fitting and snug against the chest.

This means any loose-fitting t-shirt that billows up during a run would not work.

As long as it’s not too loose, the fibre’s zigzag pattern can be adjusted to account for how much a shirt or other fabric is likely to stretch.

The team now is working with the Texas Heart Institute to figure out how to maximise contact with the skin. 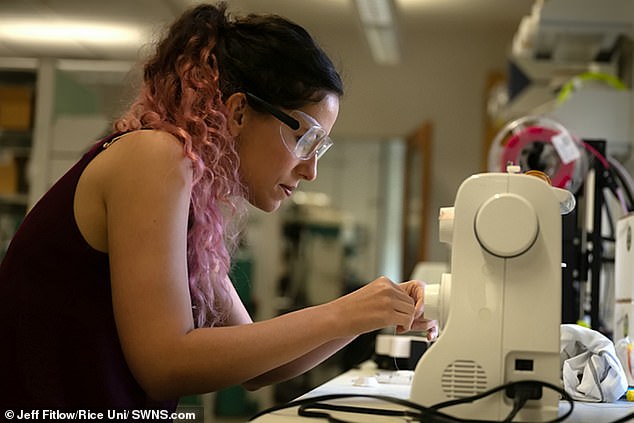 Taylor with a standard sewing machine, which can be used to sew the threads onto a tight-fitting garment

The project stems from work at the lab of chemical and biomolecular engineer Matteo Pasquali at Brown School of Engineering in Rhode Island, which introduced carbon nanotube fibere in 2013.

But the original nanotube filaments, at about 22 microns wide, were too thin for a sewing machine to handle.

Taylor said a rope-maker was used to create a sewable thread – essentially three bundles of seven filaments each, woven into a size roughly equivalent to regular thread.

‘We worked with somebody who sells little machines designed to make ropes for model ships,’ said Taylor, who at first tried to weave the thread by hand, with limited success. ‘He was able to make us a medium-scale device that does the same.’

The invention has been detailed further in the American Chemical Society’s journal Nano Letters.

Smart fabrics are fabrics that contain new or innovative components that benefit the wearer.

Smart fabrics, or smart textiles, can reacts to outside stimuli such as heat, chemicals or magnetism.

They do not necessarily have an electronic component.

The Pratt Institute in the US has said smart fabrics have the ability to ‘communicate, transform, conduct energy and even grow’.