MailOnline reveals whether air fryers can really to slash bills

Are air fryers actually more energy efficient than ovens? As hard-up shoppers turn to the kitchen gadget, MailOnline reveals whether it can really help to slash bills amid the cost-of-living crisis

With the cost of living increasing by the day, many of us are taking measures to reduce our spending, including cutting the family grocery bill, foregoing weekends away and ditching subscriptions.

Cheap energy tariffs are virtually impossible to find at the moment, so another key way to save money is to use less energy.

Air fryers have been widely touted as cheaper and healthier alternatives to ovens – but are they actually more energy efficient?

MailOnline reveals whether the kitchen gadget can really help to slash bills amid the cost-of-living crisis. 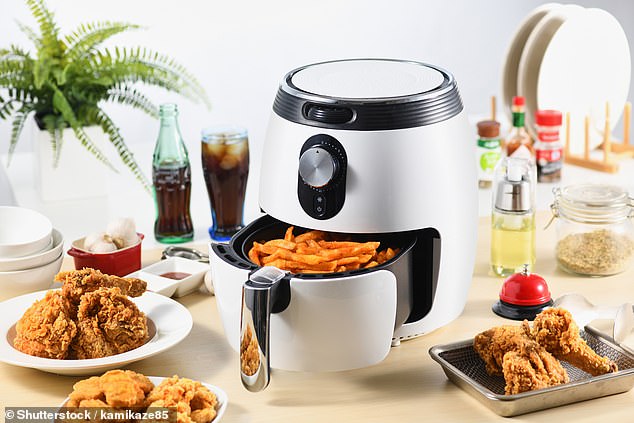 Air fryers have been widely touted as cheaper and healthier alternatives to ovens – but are they actually more energy efficient?

How much does your favourite kitchen appliance cost to run?

What is an air fryer?

An air fryer is a kitchen gadget similar to an oven, in the sense that it bakes and roasts food.

It runs on electricity and its heating elements are located on the top of the appliance, accompanied by a large, powerful fan.

As the name suggests, air fryers use hot air and a small amount of oil to cook food, and are typically faster than ovens.

How much do they cost?

Air fryers start from around £60, with more expensive models having a larger capacity and more advanced functions.

‘Models with extra features – such as control via an app on your phone or multiple compartments that let you cook two foods at once – will set you back well over £200,’ Which? explains on its website.

Are they actually healthier than ovens?

This depends on what you’re cooking.

If we’re talking about foods you’d usually deep-fry, such as frozen chips, then the answer is yes.

‘Despite both having “fryer” in their name, air fryers and deep fat fryers work quite differently,’ Which? explains.

‘Air fryers are often referred to by manufacturers as healthy or low-fat fryers, as they use hot air and a small amount of oil to cook the chips by convection. 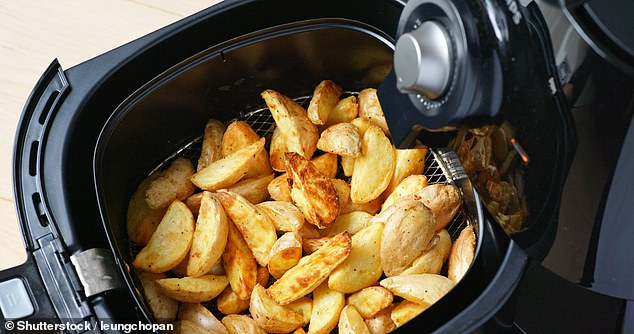 As the name suggests, air fryers use hot air to cook rather than oil, and typically cook food more quickly than ovens

When it comes to washing-up, it all depends on how long you leave the tap running.

An average dishwasher load would cost 26p to run, according to personal finance site nimblefins.co.uk.

But someone who ran a tap for 15 minutes to handwash the same number of dishes would spend twice as much — 52p.

However, using a tap for three minutes would cost only 10p — and anything less than seven-and-a-half minutes would be cheaper than the dishwasher.

‘The results are more akin to oven chips than traditional chip-shop chips.

However, if you’re cooking something that would usually go in the oven, such as chicken breasts or sausages, an air fryer won’t change how healthy it is.

On the plus side, it will speed up the cooking time!

How energy efficient are they?

Last month, Hometree released the results of its tests to see just how energy efficient your kitchen appliances are.

Its findings show that using an oven, whether it’s gas or electric, is the most costly option.

The average oven uses around 3kW, meaning it costs around 34p to run for 20 minutes.

This works out at around £1.02/hour, according to Hometree.

An electric hob was the second most expensive option, coming in at around 17p per 15-minute use, with an average wattage of 2kW, or 68p/hour.

The air fryer came in third place, largely due to the fact that it can cook food much faster than an oven. 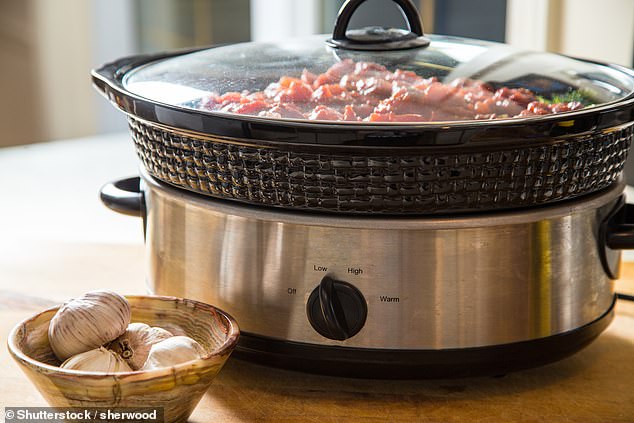 Microwaves and slow cookers were found to be the most energy efficiency kitchen appliances. An average 700w microwave costs 1.98p when used for five minutes, or 23.8p/hour, while slow cookers use around 1.2kW over the course of eight hours, working out at just 5p/hour

Pull the plug on vampire devices

Televisions, music speakers and other gadgets — so-called vampire devices — can all use electricity when left on standby.

But turning these appliances off at the plug can cut your bills by £55 a year, according to comparison site Uswitch.

Utilita Energy says leaving a TV on standby for eight hours costs the average household 23p. Meanwhile taking a laptop off charge can save 6.8p over the same time period. Pulling the plug on a digital radio will also save 14p over 24 hours.

It is worth bearing in mind that these savings can be overplayed, modern TVs, laptops, radios and other devices and far more efficient than the ones some vampire statistics are based on.

Hometree’s tests showed that the average wattage of an air fryer is 1kW, so using it for 10 minutes would cost around 5p. This works out at 30p/hour.

However, microwaves and slow cookers were found to be the most energy-efficient kitchen appliances.

An average 700w microwave costs 1.98p when used for five minutes, or 23.8p/hour, while slow cookers use around 1.2kW over the course of eight hours, working out at just 5p/hour.

So, will an air fryer help to slash your bills?

While the upfront cost of an air fryer (£60-£200) is fairly high, the gadget could be a smart choice if you tend to cook most of your meals in the oven.

This suggests that your annual savings by switching to an air fryer could be up to a whopping £279.66.

What other changes can you make in the kitchen to save money?

Small changes to your kitchen habits can have a big effect.

For example, if you batch-cook meals and reheat them in a microwave throughout the week you can save £112 a year, claims Utilita Energy.

And simmering vegetables rather than boiling them can slash your annual bills by £48.