How bats find love in the DARK: Males secrete a smelly mixture of saliva, faeces, urine and semen to attract females, study reveals

In what is a definite case of don’t-try-this-at-home, it turns out that male bats secrete a smelly mixture of faeces, saliva, semen and urine to attract females.

They found that at least a tenth of all bat species use scent to attract a partner, either using special scent glands or by daubing themselves in whiffy bodily secretions.

The findings help explain how bats can find mates in the dark, where they can’t see the visual cues — like flashy feathers or thick manes — on which other animals rely. 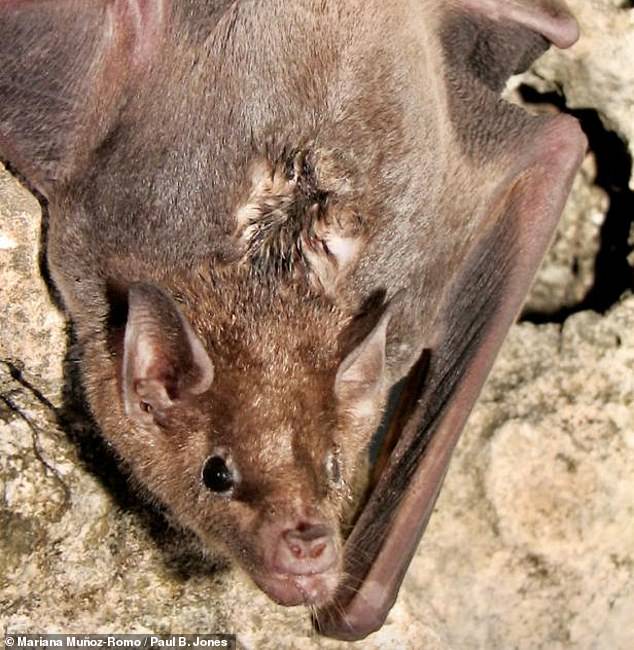 In what is a definite case of don’t-try-this-at-home, it turns out that male bats secrete a smelly mixture of faeces, saliva, semen and urine to attract females. Pictured, a male long-nosed bat seen in Venezuela during the mating season, with one such odorous patch on its back 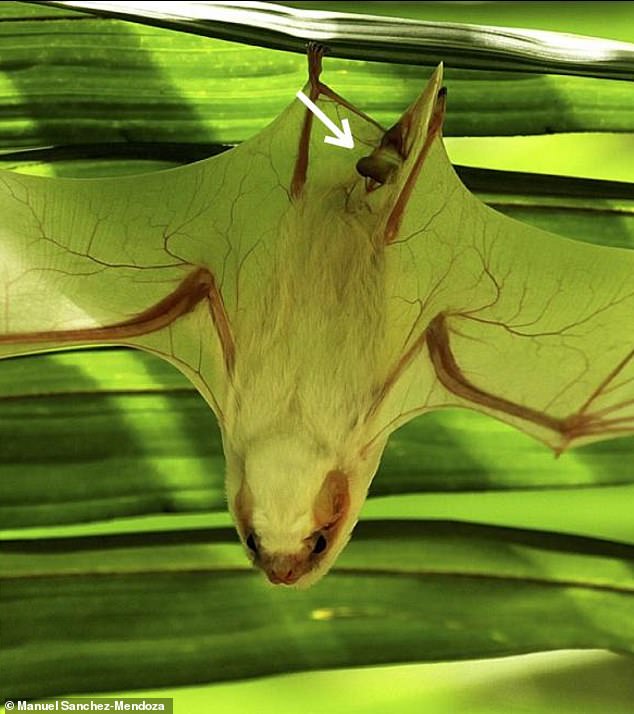 The finding helps explain how bats can find mates in the dark, where they can’t see the visual cues — like flashy feathers or thick manes — on which other animals rely. Pictured, an adult male northern ghost bat, Diclidurus albus. The white arrow is pointing out its so-called uropatagial glands, which becomes more prominent during the mating season

Smell is a powerful and informative sense for many mammal species.

Studies have shown that, from scent, some mammals can determine such details as another individual’s age, health, sex, identity, social status, group membership and even sexual receptiveness.

This, experts said, suggests that odour likely has a key role in mate selection among most mammals.

In fact, studies have found that this is important for us humans too when it comes to picking out a partner.

With the exception of their genitalia, most species of bats have females and males that look essentially indistinguishable from each other.

However, during the flying mammal’s mating season, experts have identified odor-producing glands or structures that are only present in male bats.

The team found that, in the mating season, males exhibit an odorous patch on their backs that consisted of a blend of faeces, saliva, urine and/or semen that, peculiarly, seem to help attract reproductive females to them.

Back in Panama, Professor Muñoz-Romo turned her attention to the ‘perfumes’ emitted from smelly crusts that male fringe-lipped bats  — ‘Trachops cirrhosis’ — diligently apply to their forearms every mating season.

The timing of these activities convinced the chemical communication expert that these odours were key to helping bats to pick out mates in the dark.

In fact, the team believe that female fringe-lipped bats base their evaluate of prospective mates on the size of these odorous arm crusts.

To investigate further, the team delved into the existing literature — finding reports of odour-producing structures in 121 bat species from across a total of 15 families — which is equivalent to 10 per cent of all currently known bat species.

According to the researchers, the odours come from various parts of the flying mammals’ bodies, from their heads and mouths to their wings and genitalia.

Chemical signals, they added, are potent and effective for communicating in dark conditions, while not impeding the bats’ ability to fly.

This, she continued, ‘promoted the evolution of a great diversity of the odorous displaying structures we find in bats.’ 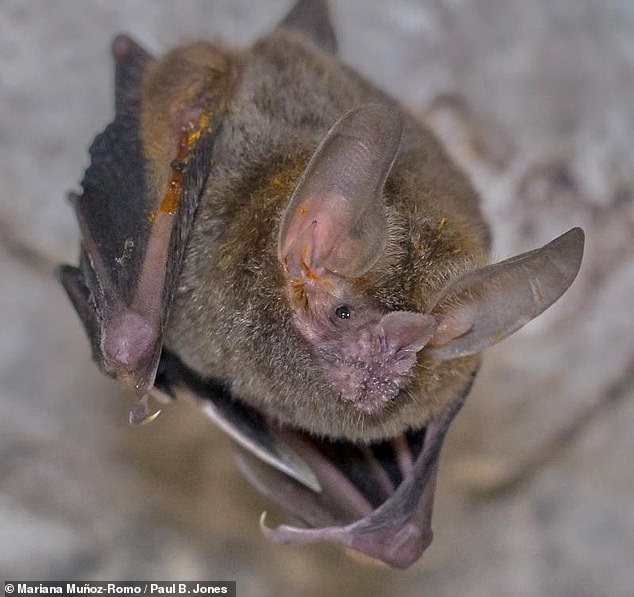 The team studied the ‘perfumes’ emitted from smelly crusts that male fringe-lipped bats — ‘Trachops cirrhosis’ diligently apply to their forearms every mating season, as pictured

The team said that very little is known at present about bats’ odour producing structures — and that there are likely many more to be discovered.

‘New tools are giving us an ever-expanding window into their previously cryptic social lives,’ she added.

‘With so many bat species still to be studied, it will be extremely exciting to see what lies on the horizon.’

‘Future investigations should consider the importance of the timing of odor production and sexual behaviour,’ added Professor Muñoz-Romo.

‘Most of these traits are displayed during a specific and usually short time of the year — the mating season.’

‘Answering new questions about the nature and development of the odorous traits, as well as understanding which traits female bats prefer, are key to understanding why differences between males and females evolved.’

‘We also want to understand the chemistry of bat perfumes — what compounds make them attractive.’

The full findings of the study were published in the journal Mammal Review.

SCENT AND HUMANS: RESEARCH REVEALED HOW ARMPIT AROMAS CAN BE A CUE FOR PASSION

Ladies, you can put away the perfume and seductive lingerie.

For the only signal a man needs to tell if a woman is in the mood for a passionate encounter is to pay attention to their natural smells, a study found.

Scientists found that men are able to detect subtle changes in the armpit aroma of women who are aroused.

And far from being a turn-off, it gets chaps in the mood too. It is believed to be the first study to confirm men can detect pheromones in sweat when women are sexually excited.

Researchers from Kent University got 24 male students to smell cotton pads put under the armpits of young women without deodorant.

In the first test, the women read an article about knitting and watched a short film about bridge-building.

The men, who had no idea what the other group had been doing, were asked to rate whether they found the scent stimulating or not afterwards.

Researchers said: ‘Our findings provide evidence that humans can signal and process the smell of sexual arousal.

‘They are among the first to show women’s arousal leads to the release of a distinctive scent that increases men’s sexual motivation. Men evaluate the sweat of sexually aroused females as more attractive than their non-sexual sweat.’

The study was published in the Archives of Sexual Behaviour.

Previous studies have suggested women give off a certain aroma at their most fertile time of the month.

Others suggest humans can smell chemicals in those gripped by fear.

bats, faec, Male, Saliva, secrete
You may also like: