NASA has successfully flown its small Ingenuity helicopter on the Red Planet. The drone was airborne for just seconds, but it represented the first powered, controlled flight by an aircraft on another world. Confirmation came via a satellite which relayed the chopper’s data back to Earth – and more pictures and videos of the moment will soon be relayed back too.

They are unlikely to cause as much as a stir as a snap from Curiosity Rover in 2019, though.

The black and white photograph showed the desert landscape with high rocky hills in the background, but in front of the larger rock formations, a tiny elongated white blob appeared.

And it sent some conspiracy theorists into meltdown.

Commenting on the anomaly, one wrote on Twitter: “Mars rover captured a glowing light in the distance. Alien signals? I think yes”. 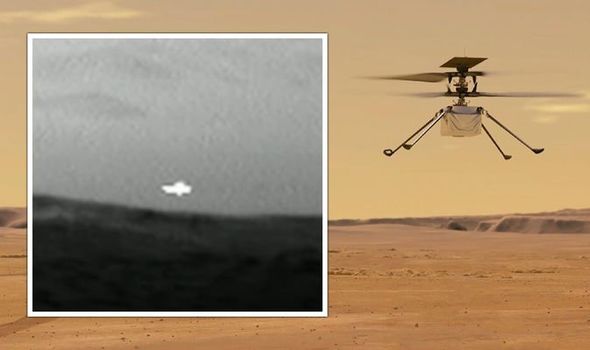 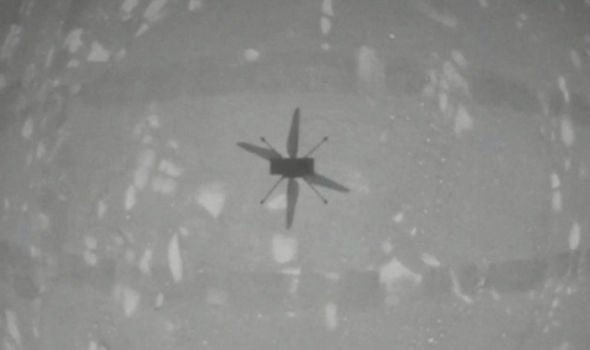 And a third claimed: “This could indicate there is intelligent life below the ground that uses light as we do.”

But NASA quickly shut down the sensational claims.

They believed it was more likely to have been a cosmic ray, some kind of camera lens flare or sunlight reflecting on rocks.

A spokesman said: “One possibility is that the light is the glint from a rock surface reflecting the Sun. 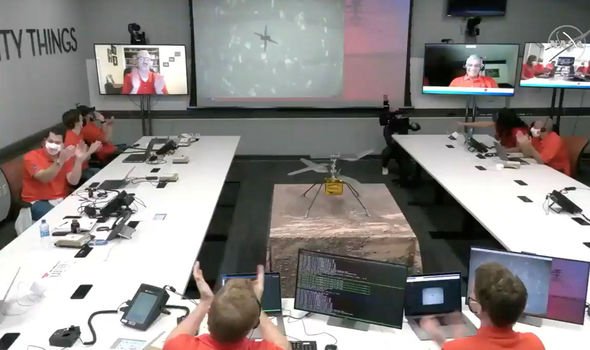 “When these images were taken each day, the Sun was in the same direction as the bright spot, west-northwest from the rover, and relatively low in the sky.

“The rover science team is also looking at the possibility that the bright spots could be caused by cosmic rays striking the camera’s detector.”

Experts at NASA believed the glow may have been caused by sunlight reaching the camera’s sensors through a vent hole in the camera housing.

The agency says this has happened previously on other cameras on Curiosity and other Mars rovers when the geometry of the incoming sunlight relative to the camera is precisely aligned. 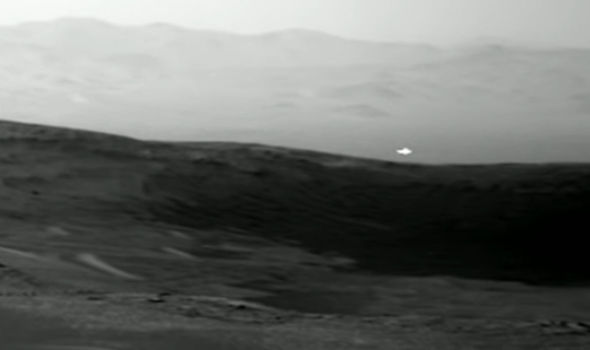 They added: “Among the thousands of images received from Curiosity, ones with bright spots show up nearly every week.”

NASA’s helicopter was carried by the Perseverance Rover, which touched down in Jezero Crater on the Red Planet in February.

The rover will look for signs of past microbial life, cache rock and soil samples, and help the space agency prepare for future human exploration.

NASA’s human lunar exploration plans under the Artemis programme call for sending the first woman and next man to the surface of the Moon by 2024, before preparing humanity’s next giant leap – sending astronauts to Mars. 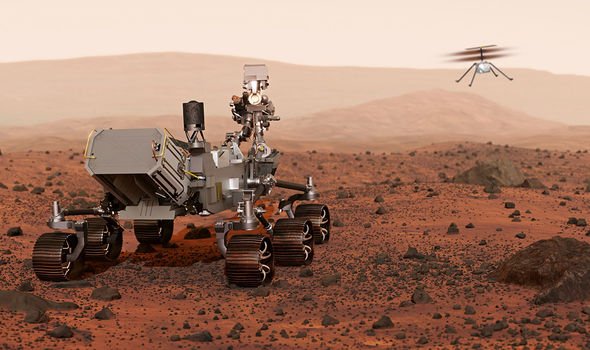 MiMi Aung, project manager for Ingenuity at Nasa’s Jet Propulsion Laboratory, said: “We can now say that human beings have flown a rotorcraft on another planet.

“We’ve been talking for so long about our ‘Wright Brothers moment’ on Mars, and here it is.”

The comment is a reference to Wilbur and Orville Wright who conducted the first powered, controlled aircraft flight here on Earth in 1903.

Ingenuity even carries a small swatch of fabric from one of the wings of Flyer 1, the aircraft that made that historic flight at Kitty Hawk, North Carolina, more than 117 years ago.