Meet the daredevil who broke the sound barrier jumping from SPACE

Meet the daredevil who broke the sound barrier jumping from SPACE: MailOnline speaks to Felix Baumgartner 10 years after his record-breaking skydive from 128,100 feet

The idea of skydiving is enough to get even the most daring adrenaline junkie’s palms sweating.

And while the average skydive takes place from a height of around 10,000ft, this pales in comparison to a record-breaking jump that took place 10 years ago.

On this day in 2012, daredevil Felix Baumgartner, now 53, jumped from the edge of space, armed only with a pressure suit, a parachute, and nerves of steel.

He free fell to Earth for more than four minutes, during which time he reached dizzying speeds of 843.6mph and broke the sound barrier, before opening his parachute and safely gliding down to land in New Mexico.

To celebrate the tenth anniversary of his jump, MailOnline spoke to Mr Baumgartner, who described his memories of the terrifying stunt – and why he would never attempt it again. 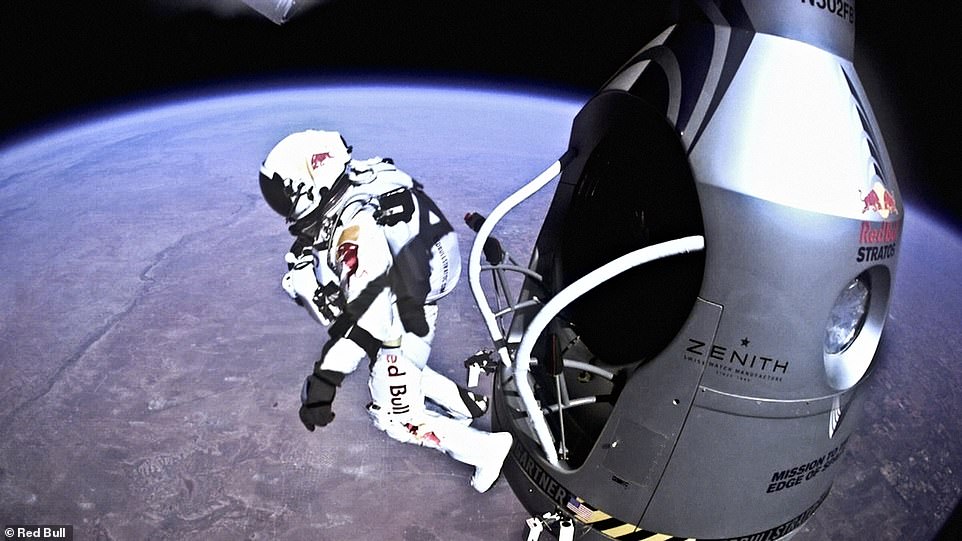 On this day in 2012, daredevil Felix Baumgartner, now 53, jumped from the edge of space, armed only with a pressure suit, a parachute, and nerves of steel

On 14 October 2012, millions of people around the world eagerly tuned in to watch Mr the record-breaking jump from the edge of space, which played out live across 77 TV channels and online.

At 9:28 MDT, Mr Baumgartner boarded the Red Bull Stratos capsule wearing a pressurised suit, before soaring up to the edge of space, guided by a helium balloon.

Mr Baumgartner was an accomplished skydiver who had completed thousands of jumps before setting his sights on space.

His inspiration was Captain Joe Kittinger, a retired fighter pilot who had jumped to Earth from 102,800ft back in 1960.

Speaking to MailOnline, he said: ‘As a skydiver, you always want to push the envelope.

‘What Joe accomplished in the 1960s after only 33 skydives – this is what I call a true pioneer.

‘And I had a couple thousand skydives under my belt.

‘You’re always thinking, what more can I do? Go faster? Go higher? It’s always floating out there.’

Mr Baumgartner had previously worked with Red Bull on base jumps, and reached out to them once again with the idea of jumping from space.

‘Because of all the trust I’d built with Red Bull with base jumps, we took on that challenge trying to find the right people,’ he explained.

This included his inspiration, Joe Kittinger, who agreed to help him.

‘Joe made it very clear the first time I met him – I’m interested but I’m only going to support you if you take it seriously. You can’t go from zero to hero. We have to do it the right way.’

‘A lot of people didn’t believe in us, so it took us a while to convince people to come on board,’ Mr Baumgartner said. ‘We had to be really patient.’

The plan was simple – Mr Baumgartner would board the Red Bull Stratos capsule wearing a pressurised suit, before soaring up to the edge of space, guided by a helium balloon.

Once he reached an altitude of 114,829ft (35,000 metres), Mr Baumgartner would open the capsule door and jump, freefalling for four minutes before opening his parachute and gliding to the ground.

While the entire mission would take less than three hours, Mr Baumgartner knew there were several things that could go wrong.

‘It’s a very hostile environment up there. If the suit fails, your blood would start to boil and you’d die in 15 seconds,’ he said.

‘The parachute could malfunction or you could flat spin, which pushes all your blood into your skull. If that happens, at a certain RPM your blood only has one way out – through your eyeballs.’ 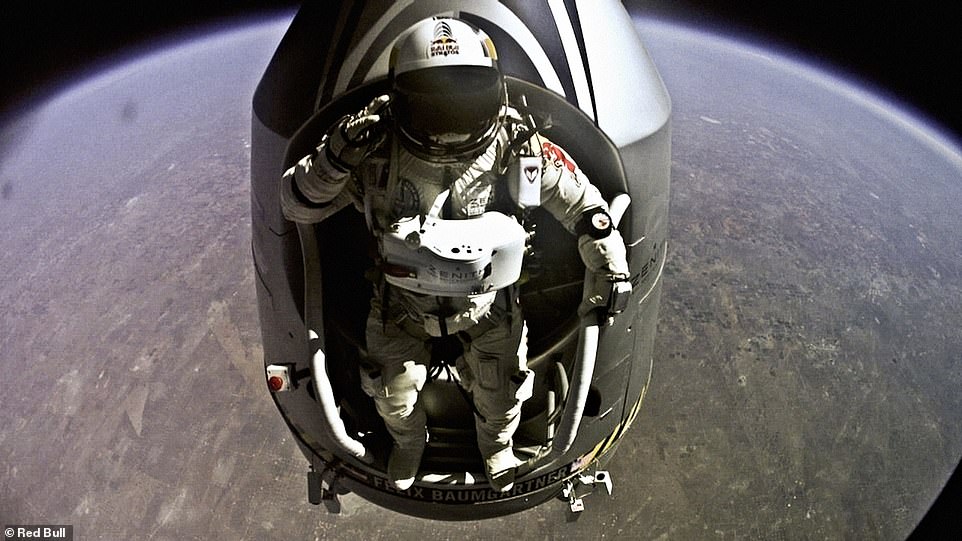 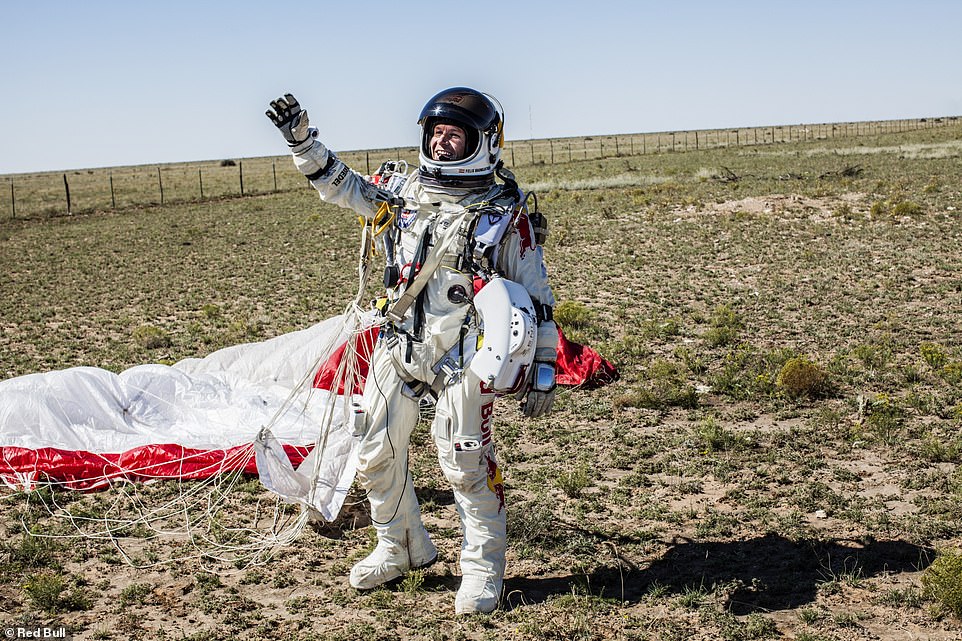 Despite surviving the stunt unscathed, his main concern was whether or not he had hit his key goal – breaking the sound barrier

Following a briefing with a doctor, Mr Baumgartner was told the ‘good news’ – if something went wrong ‘it would only take 15 seconds to die.’

The launch was originally scheduled for 9 October 2012, but was aborted due to adverse weather conditions.

‘The first test got called off, and we only had one spare balloon,’ said Mr Baumgartner. ‘If the second test failed, we would have had to wait another six months to try again.’

Thankfully, Mr Baumgartner woke up on the 14 October to better conditions, and felt optimistic for the second launch attempt.

‘You wake up a 2am and go out to mission control, do the weather brief and medical tests,’ he described.

‘They put on my pressure suit and then put me in the capsule. Once the balloon launched, it was a big relief – we were on the way.’

During the 90 minute ascent, several questions were going through Mr Baumgartner’s head. 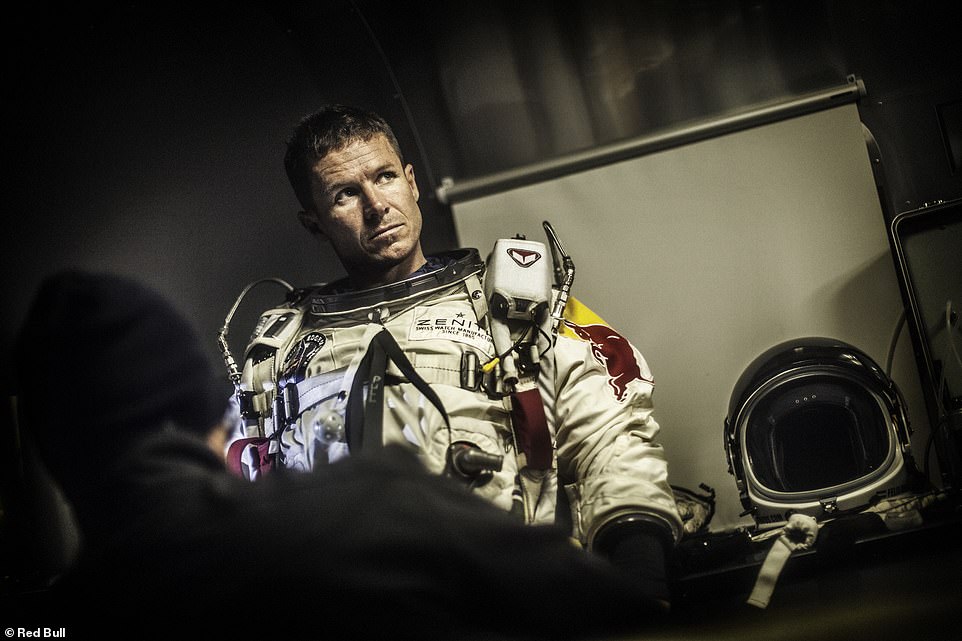 To celebrate the tenth anniversary of his jump, MailOnline spoke to Mr Baumgartner, who described his memories of the terrifying stunt – and why he would never attempt it again 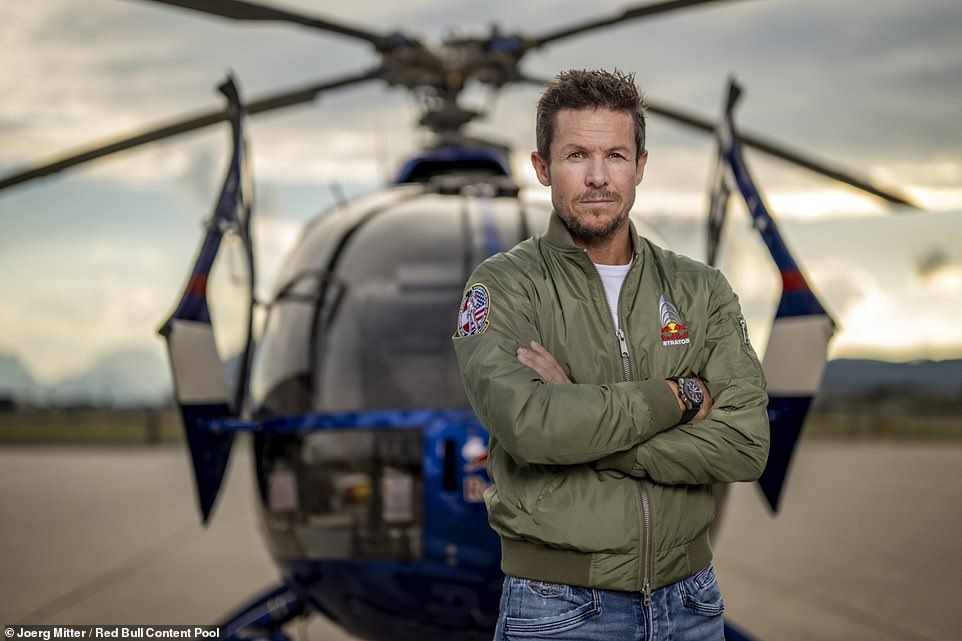 ‘Will we reach jump altitude of 35,000 metres? Can I even open the door? It might be frozen shut?’ he described.

His worries were put to rest, however, when the capsule reached 38,969.3 metres (127,852 feet) and the door opened without a hitch, at which point he knew there was only one way down.

While you might think Mr Baumgartner would be nervous at this point, he explained how he actually felt strangely peaceful.

‘I looked up and the sky was black,’ he said.

‘It was completely silent. All you can hear is yourself breathing. It was very peaceful.’

As much as he wanted to enjoy that moment, Mr Baumgartner didn’t have long – he had already disconnected from the capsule’s oxygen supply, and now relied on an oxygen cannister, which would only last for 15 minutes.

He saluted the capsule’s camera, took one step forwards and jumped.

As he fell back down to Earth, Mr Baumgartner quickly accelerated, going from 0 to 890mph in just 50 seconds and breaking the sound barrier.

While the footage of his four minute and 19 second descent is terrifying to watch, he explained that he didn’t even feel it. 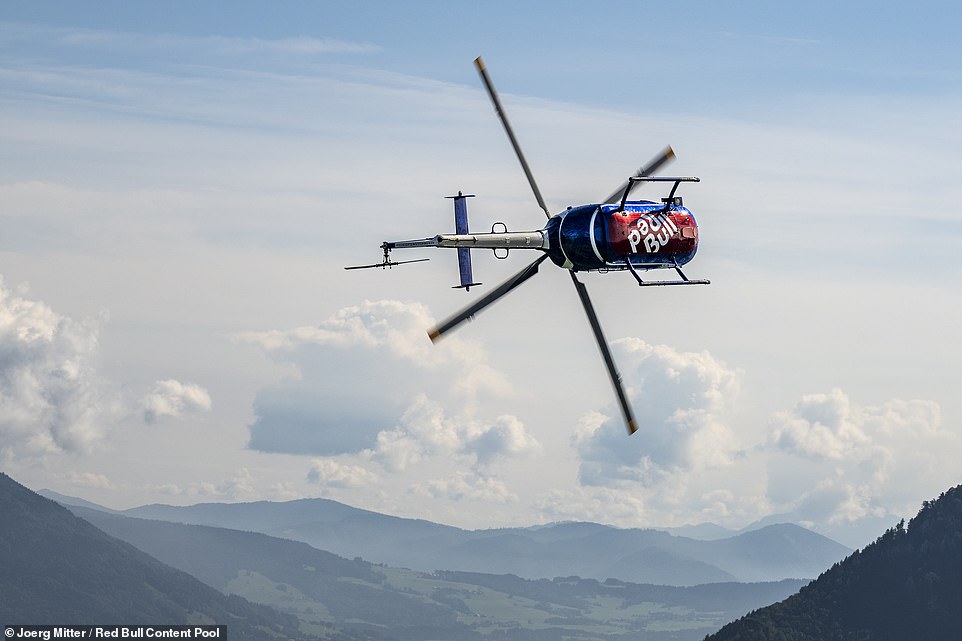 Ten years on from the jump, Mr Baumgartner says he has no plans to recreate the stunt, and is now focused on his work as an acrobatic helicopter pilot

‘You don’t feel it. There’s nothing rushing by to give you a sense of speed. The suit isn’t flapping because it’s pressurised. So there’s not indication of how fast you’re going,’ he said.

At 1,500 metres (4,921ft) above ground level, Mr Baumgartner opened his parachute and safely glided to the ground in New Mexico.

Despite surviving the stunt unscathed, his main concern was whether or not he had hit his key goal – breaking the sound barrier.

‘Once I landed, I was super happy it had gone well, but I still didn’t know if I’d broken the sound barrier,’ he said.

‘It took 10 minutes to download my data before I knew if I’d done it.’

‘That was a very relieving moment,’ he added.

Ten years on from the jump, Mr Baumgartner says he has no plans to recreate the stunt, and is now focused on his work as an acrobatic helicopter pilot.

‘Of course I wouldn’t do it again! We were trying to accomplish breaking the sound barrier in freefall,’ he said.

‘If we did it again, it’s as risky. Just because it worked once, doesn’t mean it would work again. I’ll leave it to the next generation.’