What your PENIS says about you: Men with big members and trimmed pubic hair are seen as more extroverted and open to new experiences – while those with smaller ones are perceived as more neurotic

Men are often told ‘the bigger the better’ when it comes to penis size.

Researchers from New Mexico Highlands University say that men with big penises and trimmed pubic hair are seen as more attractive, extroverted, and open to new experiences, while those with smaller members are seen as more neurotic.

‘This research demonstrates that genital appearance may contribute to socially shared implicit theories about people, regardless if these impressions reflect the true personality of the person being assessed,’ the researchers wrote in their study. 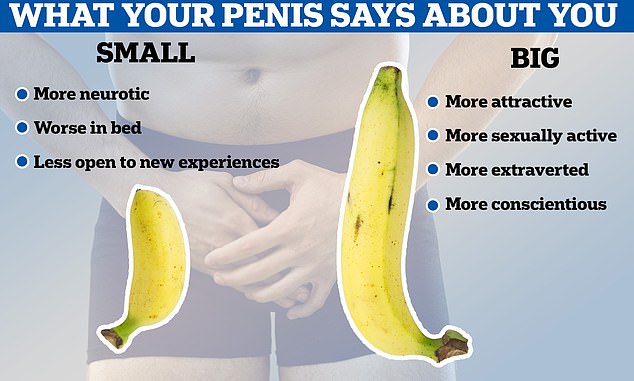 Researchers from New Mexico Highlands University say that men with big penises and trimmed pubic hair are seen as more attractive, extroverted, and open to new experiences, while those with smaller members are seen as more neurotic

What your penis says about you

In the study, the team set out to assess how people perceive men’s personalities based on their penises alone.

Writing in the journal Sexuality & Culture, the team, led by Thomas R. Brooks, said: ‘Dating app users are likely to experience a high frequency of viewing the sexually explicit material of potential partners prior to a physical meeting.

‘The present study aimed to investigate what information is inferred from a picture of a penis at zero-acquaintance.’

The team enlisted 106 participants (80 per cent women) for the study, who were shown photos of 24 penises that varied in girth, length, and the amount of pubic hair.

After viewing each photo, the participants were asked to respond to 11 questions:

When it came to girth, men with narrow penises were seen as more neurotic.

In contrast, those with wide penises were perceived to be more sexually active, better in bed, more extroverted, more open to new experiences, more of a pleaser, and to have had more sexual partners.

Finally, it seems that when it comes to pubic hair, trimmed is the best option for men. 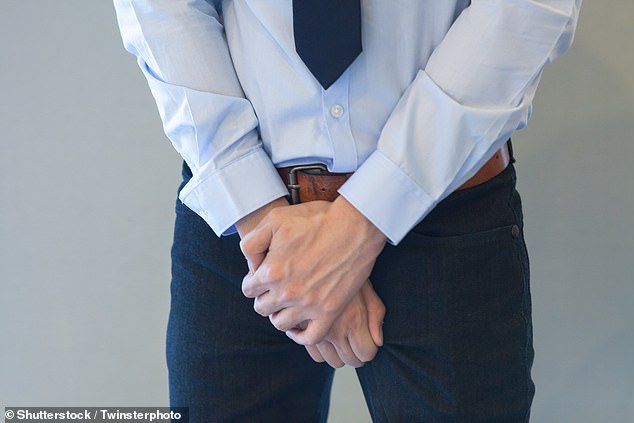 ‘Penises with trimmed pubic hair were perceived to be more prototypical and attractive,’ the researchers wrote.

‘However, while they were perceived to be more conscientious than non-trimmed pubic hair, they did not significantly differ from fully shaved pubic hair.’

Overall, the findings suggest that impressions can be formed of men based purely on their penises.

‘While most research has prioritised the face pictures and biographies of potential partners, the present findings take a step forward to investigate how pictures of penises may contribute to the holistic perception of the person within digital spaces,’ the researchers said.

They now hope to carry out further studies in which the men’s personalities are actually assessed to see how they compare to the perceptions based on their penises alone.

Women prefer a larger penis for a one-night-stand than for a long-term relationship, a 2016 study found.

Dr Nicole Prause, a neuroscientist at UCLA who specialises in sex drive, created 33 3D-printed phalluses, which were placed in a basket.

Seventy-five women were asked to select two ideal penises from the basket of 3D-printed penises – one that they would prefer for a one-night-only liaison, and one for a long-term partner.

The biggest one in the basket was just shy of 9 inches, and the smallest just over 4 inches.

The study found that the ultimate size for a long-term boyfriend’s erect penis was 6.3 inches in length, and 4.8 inches in girth.

For one night only, the average ideal was 6.4 inches in length, 5 inches in girth.

Both are bigger than the average penis length and girth in both the UK and the US.

In the UK, the average erect penis is between 5.7 inches long, and between 4.9 inches in girth.

In America, the average erect penis is just under 5.6 inches in length and 4.8 inches in circumference.

Contrary to received wisdom, the study showed overwhelmingly that – although women prefer slightly bigger than average penises – they are more concerned with girth.

It is something Dr Prause has come to observe in her work, and she told Broadly the obsession with length is somewhat baffling given the studies and research.

‘Science has consistently shown girth is a stronger predictor of female preferences and satisfaction,’ she said.

‘It may be that surgeries for increasing length tend to have better outcomes, so men focus on length as something they can more likely affect.

‘Limited just to physical attractiveness, many indicators of health that are at least somewhat under our control affect women’s attraction. This includes things like weight, muscularity, skin pallor, and acne.’