Michael Collins, who stayed behind while Neil Armstrong and Buzz Aldrin walked on the moon in 1969, has died at the age of 90. His family released a statement confirming the passing of the astronaut on Wednesday “after a valiant battle with cancer.”

The touching statement read: “We regret to share that our beloved father and grandfather passed away today, after a valiant battle with cancer.

“He spent his final days peacefully, with his family by his side.

“Mike always faced the challenges of life with grace and humility, and faced this, his final challenge, in the same way.

“We will miss him terribly. Yet we also know how lucky Mike felt to have lived the life he did. 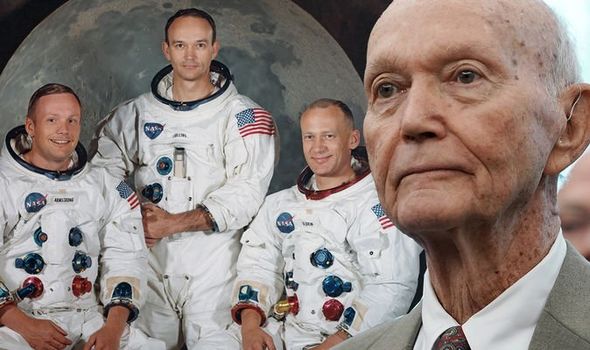 “We will honour his wish for us to celebrate, not mourn, that life.

“Please join us in fondly and joyfully remembering his sharp wit, his quiet sense of purpose and his wise perspective, gained both from looking back at Earth from the vantage of space and gazing across calm waters from the deck of his fishing boat.”

His family asked for privacy “during this difficult time”.

He said:  “Today the nation lost a true pioneer and lifelong advocate for exploration in astronaut Michael Collins.

“As pilot of the Apollo 11 command module – some called him ‘the loneliest man in history’ – while his colleagues walked on the Moon for the first time, he helped our nation achieve a defining milestone. He also distinguished himself in the Gemini Program and as an Air Force pilot.”

Mr Collins was best known for accompanying Neil Armstrong and Buzz Aldrin on their trip to the Moon as a crew member. 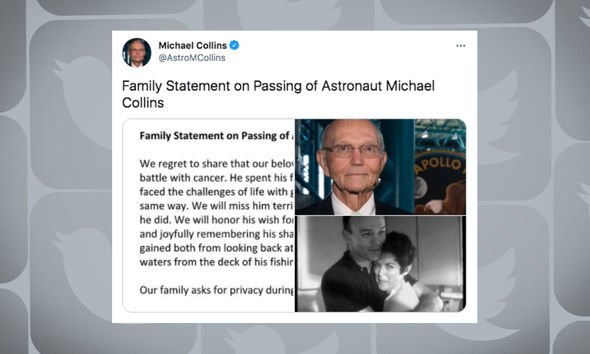 However, he didn’t actually step foot on the lunar surface, staying in orbit as Armstrong and Aldrin descended.

Fans have been quick to offer their condolences and share their admiration of the astronaut.

One wrote: “I always admired Michael Collins as the unsung hero of the Apollo 11 mission.

“He endured the loneliness of space thousands of miles from any other human so that Neil Armstrong & Buzz Aldrin could do their thing on the surface of the moon. #RIP Hero.”

Another said: “Farewell Sir. Thank you for everything you did to inspire myself and others to achieve more.

“You have been a roll model [sic] that I have personally looked up to and I wish I could have met you. Rest In Peace.”