A powerful burst of high-energy light has swept through the solar system, scientists have revealed. This cosmic eruption was actually caused by a flare from a distant neutron star.

Scientists record these bursts of light relatively frequently – they can appear daily, on some occasions.

They’ve often had the suspicion that they may originate from magnetars relatively close to home.

They develop when giant stars die, and their cores become crushed remnants of a stellar object. 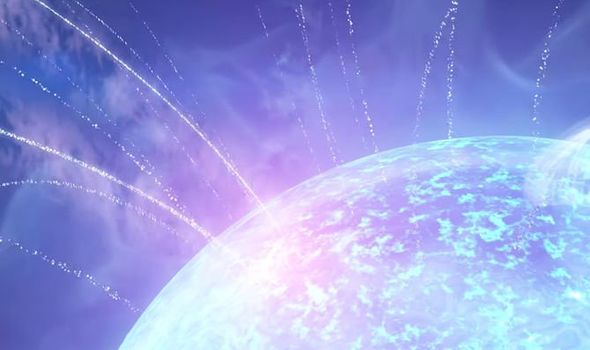 A magnetar is just like any other neutron star, except their magnetic fields are up to 1,000 times stronger.

On occasion, these magnetars have been known to produce eruptions – known as giant flares – that send shockwaves of gamma-rays throughout their galaxies.

There are 29 magnetars in our own galaxy, the Milky Way, although there are countless others elsewhere in the universe and beyond.

Scientists have now been able to confirm that some of the gamma-ray bursts spotted in our very own solar system are caused by distant magnetars, thanks to the latest spike in high-energy light waves.

NASA and Russian equipment first reported the x-ray and gamma-ray burst on April 15, 2020.

It first triggered the Russian High Energy Neutron Detector, which has been orbiting Mars since 2001.

Almost seven minutes later, the burst showed up on NASA’s Wind satellite, which is orbiting between the Earth and the Sun.

The pulse itself only lasted for about 140 milliseconds; as fast as a blink of the eye.

But, despite only lasting for a minuscule amount of time, its effects could be long-lasting on the science community. 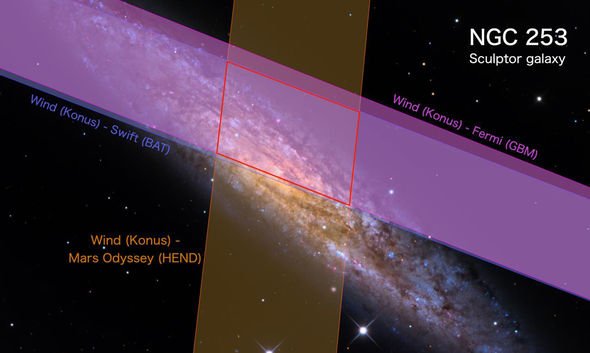 Experts managed to pinpoint where the eruption first came from, using a combination of NASA and Russian equipment.

They believe it originated in a region of space known as NGC 253; a bright galaxy about 11.4million light-years away.

“Giant flares within our galaxy are so brilliant that they overwhelm our instruments, leaving them to hang onto their secrets,” said Kevin Hurley, Senior Space Fellow at the University of California, Berkeley.

“For the first time, GRB 200415A [the name of the flare] and distant flares like it allow our instruments to capture every feature and explore these powerful eruptions in unparalleled depth.”

Giant flares are believed to result from a sudden rearrangement in magnetic fields.

For a powerful magnetar, the magnetic field may become too twisted.

Energy may be expelled from the magnetic field to try and rearrange it into a more stable position.

The result is a powerful flare that sends gamma rays and x-rays away from its host neutron star.