A baby smooth-hound shark has been dubbed a ‘miracle’ by aquarium staff after being born in a tank full of females.

Experts believe this could be the first case of ‘asexual reproduction’ in the species –  where a baby is born to to just a single parent, with no fertilisation.

When this happens, the offspring is a clone of the mother, as they are genetically identical.

The unique baby was born to one of the two females that spent a decade in the tank at the Acquario Cala Gonone in Sardinia, Italy without a single male present.

The female pup has been named ‘Ispera’ by the aquarium staff, and if DNA tests show she is identical to one of the females, it will be the first case of asexual reproduction in this particular species of shark.

It was likely she was the result of parthenogenesis, where the genetic material from a particular cell in the mother is able to fertilise an egg to form an embryo. 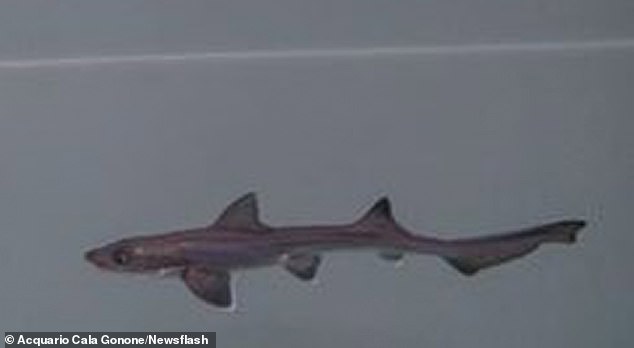 A baby smooth-hound shark has been dubbed a ‘miracle’ by aquarium staff after being born in a tank full of females, in what could be a case of asexual reproduction 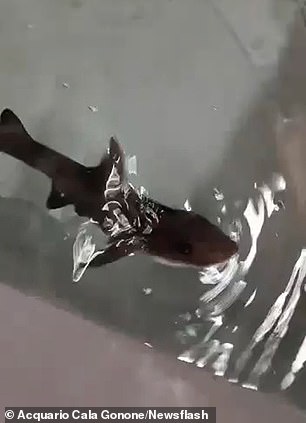 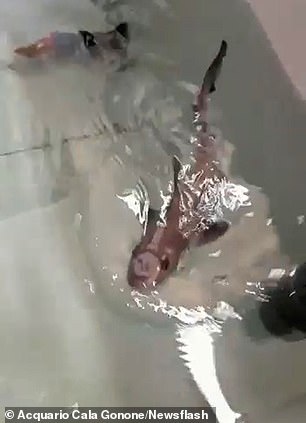 Asexual reproduction is where a baby is born to to just a single parent, with no fertilisation. When it happens, the offspring is a clone of the mother as they are genetically identical

They are found in the eastern Atlantic Ocean from the UK to South Africa.

It is also found in the Mediterranean Sea, Madeira and the Canary Islands.

It swims at depths of five to 625 metres below the surface, but usually doesn’t go lower than 50m.

The species can reach about 200cm in length and are 35cm when born.

It is regarded as vulnerable on the IUCN red list of endangered species.

In males the pelvic fins are modified to form claspers for mating.

They aggregate in large numbers, like a pack of dogs and reproduce sexually, with the embryo growing inside the mother.

However, a recent discovery found evidence of asexual reproduction in a tank in Italy where no males had been present for a decade.

It currently isn’t a confirmed case of parthenogenesis, but the team says no other explanation is possible.

They explained that asexual reproduction may be favoured by certain shark species living in low density populations, particularly when females have little chance of encountering a male to reproduce with.

The staff at the Cala Gonone Aquarium have sent two DNA samples from the two female sharks to a specialised laboratory, as this is the only way the hypothesis can be confirmed.

Unfortunately, COVID-19 research has shifted focus away from other fields of research in Italy, meaning the DNA analysis is likely to take a while to be completed.

Parthenogenesis is a process that essentially forms ‘clones’ of the parent, since the embryo receives genetic material from only one individual.

One of the most typical processes for this form of reproduction is for the egg to be fertilised by a still immature egg cell that behaves almost like a sperm.

However it has also been noticed in some species like reptiles, fish and even birds who would normally reproduce sexually.

Proving that this type of reproduction is also possible among smooth-hound sharks would be a significant scientific breakthrough.

Experts say it could pave the path for study into whether parthenogenesis is a natural process used by this type of marine animal.

In 2017, a captive zebra shark named Leonie laid eggs that hatched into three viable pups, despite not being near a male for three years prior to the ‘virgin birth’.

What made this one unusual is that it wasn’t the first time Leonie had given birth. It had previously only been seen in ‘virgin sharks’.

Christine Dudgeon at the University of Queensland, who was involved in studying Leonie’s case, said asexual reproduction in sharks can happen when the egg is fertilised by an adjacent cell known as a polar body.

However, over time this can lead to ‘extreme inbreeding’, she told New Scientist in 2017, adding that it was ‘not a strategy for surviving many generations because it reduces genetic diversity and adaptability.’

HOW DOES CLONING HAPPEN IN NATURE?

Since there is only one parent, sec cells (sperm and eggs) don’t fuse and no genetic mixing takes place.

Because of this, the offspring of asexual reproducing organisms are genetically identical to the parent and to each other – they are clones.

For instance, female marble crayfish can induce her own eggs to start dividing into embryo .

Normal sex cells contain a single copy of each chromosome. But the mutant crayfish sex cell has two.

The two sex cells fuse and produce a female crayfish embryo with three copies of each chromosome instead of the normal two.

Some other examples of organisms that can clone themselves include: