More than 30,000 near-Earth asteroids have now been discovered

More than 30,000 near-Earth asteroids have now been discovered – including 1,425 with a chance of hitting our planet, European Space Agency reveals

In a major milestone for astronomers, more than 30,000 near-Earth asteroids (NEAs) have now been discovered in the Solar System.

According to the European Space Agency (ESA), there’s now a total of 30,039 near-Earth asteroids that are known to science, and the number is rapidly rising.

Near-Earth asteroids are rocky bodies orbiting the Sun on a path that brings them close to Earth’s orbit – and some have the potential to hit our planet.

ESA claims 1,425 of the total have a ‘non-zero chance of impact’ with our planet and are therefore under the ‘watchful eye’ of a network of telescopes. 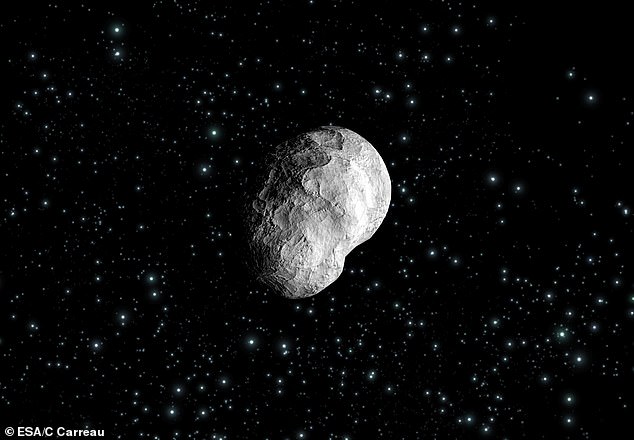 Near-Earth asteroids are rocky bodies orbiting the Sun on a path that brings them close to Earth’s orbit. Pictured is an artist’s impression of asteroid 21 Lutetia, which is located in the main asteroid belt 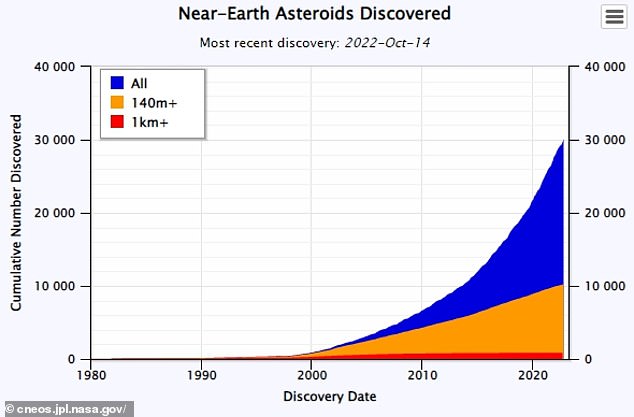 WHAT ARE NEAR-EARTH ASTEROIDS?

Near-Earth asteroids are rocky bodies orbiting the Sun on a path that brings them close to Earth’s orbit.

An asteroid is called a near-Earth asteroid (NEA) when its trajectory brings it within 1.3 astronomical units (AU) of the Sun.

A single astronomical unit is the distance between the Sun and Earth.

According to ESA, the majority of the 30,000 NEAs were discovered in the last decade, thanks to rapidly improving technology.

‘The good news is that more than half of today’s known near-Earth asteroids were discovered in the last six years, showing just how much our asteroid eyesight is improving,’ said Richard Moissl, ESA’s head of planetary defence.

‘As this new 30,000 detection milestone shows, and as new telescopes and methods of detection are built, it’s only a matter of time until we’ve found them all.’

Currently, NEAs make up about a third of the roughly one million asteroids discovered so far in the Solar System.

Most of them reside in the asteroid belt – the ring-shaped region in the Solar System, located roughly between the orbits of Jupiter and Mars. 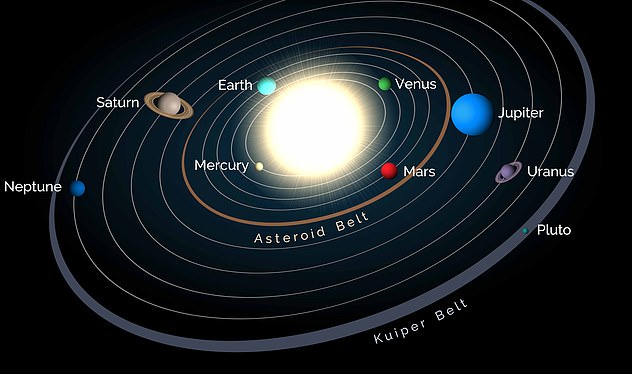 Most NEAs reside in the asteroid belt – the ring-shaped region in the Solar System, located roughly between the orbits of Jupiter and Mars

The first ever NEA to be discovered, called 433 Eros, was first noticed by German astronomer Carl Gustav Witt at Berlin Observatory on August 13, 1898.

Known for its weird, elongated shape and stony composition, 433 Eros’ orbit brings it to within around 13.5 million miles of Earth – 57 times the distance of the Moon.

The craft – NEAR Shoemaker – studied Eros from close orbit over a period of a year before landing on its surface in February 2001.

An asteroid is classed a near-Earth when its trajectory brings it within 1.3 astronomical units (AU) of the Sun.

A single astronomical unit is the distance between the Sun and Earth (93 million miles) so many are still a considerable distance away from us.

Thankfully, experts can detect their position and whether they will hit Earth up to hundreds of years into the future.

‘Of course, any asteroid discovered near Earth qualifies as a near-Earth asteroid, but many are found far from home,’ said Marco Micheli, astronomer at ESA’s Near-Earth Object Coordination Centre.

‘New objects are observed over time, their movements are studied and with just a handful of data points from different nights their future positions can be predicted.

‘Depending on the number and quality of observations, this can extend decades, even hundreds of years into the future.’ 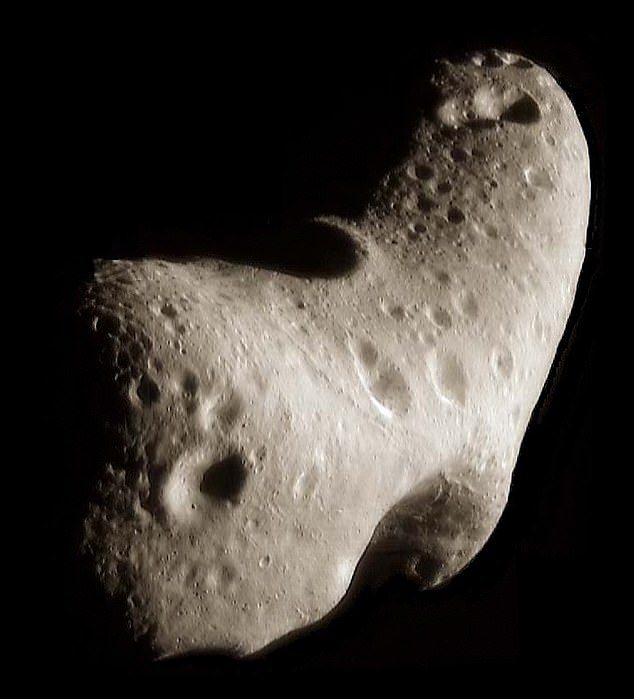 Known for its weird elongated shape and stony composition, 433 Eros’ orbit brings it to within around 13.5 million miles of Earth – 57 times the distance of the moon

On average, Earth is hit by a football pitch-sized rock every 5,000 years, and a civilisation-ending asteroid every one million years, according to NASA’s Near-Earth Object Program.

In an attempt to tackle the threat of asteroids that may one day get a little too close for comfort, NASA formed a planetary defence program, which includes the Double Asteroid Redirection Test (DART) mission.

DART was launched from California last November – and finally completed its 10-month journey when it hit the asteroid Dimorphos last month.

Dimorphos, around 560 feet in diameter, orbits a larger asteroid called Didymos, both of which are around 6.8 million miles away from our planet.

On September 26, DART smashed into Dimorphos, which orbits a larger asteroid called Didymos. Dimorphos is depicted here to scale with Rome’s Colosseum

DART hit the space rock at more than 14,000 miles per hour and was destroyed upon impact, while Dimorphos received a ‘small nudge’ to alter its trajectory by a fraction.

NASA announced earlier this month that the mission was a success, as the craft managed to shorten Dimorphos’ orbit by 32 minutes.

Neither Dimorphos nor Didymos pose any danger to Earth; rather, the $325 million (£298 million) mission was a rehearsal of what may be required if a space rock does one day threaten our planet.

NASA’s DART mission, which plowed a spacecraft into a small asteroid 6.8 million miles from Earth, was a ‘smashing success’.

Data published on October 11 revealed the space rock’s orbit was successfully shifted by the impact.

The planetary defense test, conducted on September 26, aimed to see if we could nudge the path of a massive asteroid heading straight for our planet.

Before the impact, Dimorphos took 11 hours and 55 minutes to circle its parent asteroid, Didymos – but post-impact, its orbit is shortened by 32 minutes.

The initial goal was to shave off at least 10 minutes, so the results surpassed this by far.