More tropical cyclones could hit cities such as Beijing, Tokyo and New York because of rising temperatures caused by climate change, study warns

As their name suggests, tropical cyclones have long been characterised by the fact that they form almost exclusively over seas located at low-latitudes.

Key to these storms are warm sea surface temperatures of at least 81°F (27°C) and converging low-level winds that force air to rise and form storm clouds.

As long as the burgeoning system has enough distance from the equator, planetary spin will interact with the flow of moist rising air, causing it to rotate cyclonically.

And just as cyclones do not form too close to the equator, their range is bounded at higher latitudes by the jet streams, which have long confined them to the tropics.

Research by Yale University-led experts, however, suggested that global warming will reduce the temperature differential between the equator and the poles.

This, they warn, could weaken the jet stream at mid-latitudes, allowing cyclones to form — by 2100 — over a wider range than they have in the last 3 million years.

The ability for more tropical cyclones to form at mid-latitudes, where most of the world’s population lives, will place millions more within their devastating reach. 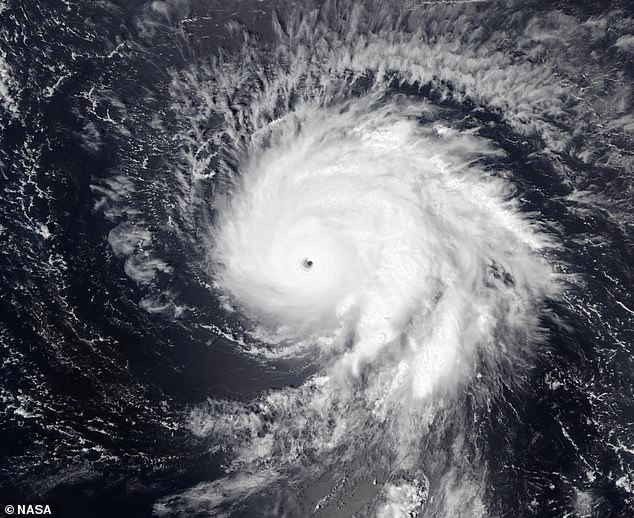 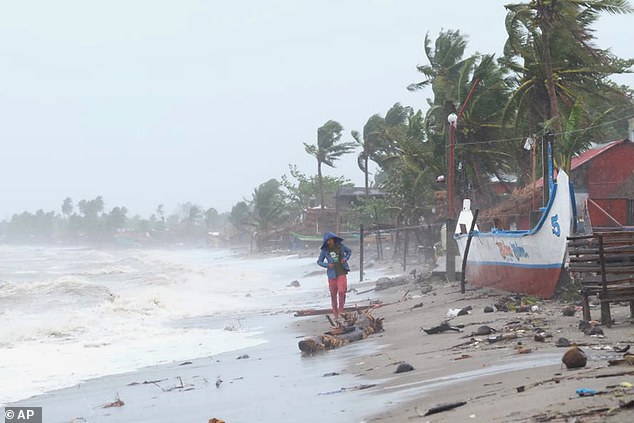 As their name suggests, tropical cyclones have long been characterised by the fact that they form almost exclusively over seas located at low-latitudes. Pictured: Typhoon Goni batters the coast of the central Philippines’ Sorsogon province on November 1, 2020

The investigation by physicist Joshua Studholme of Yale University and colleagues was inspired in part by September 2020’s subtropical storm Alpha — the first ever cyclone to make landfall in mainland Portugal.

‘We hadn’t observed this before,’ Dr Studholme told BBC News.

‘You had a traditional kind of mid-latitude storm, that […] in its decay, the right conditions for a tropical cyclone to form occurred,

‘That hadn’t happened to Portugal before.’

In their study, the team reviewed existing research into the impacts of climate change on the jet streams, tropical atmospheric circulation and the convergence of the trade winds over the equator.

They did so, however, through the lens of how these effects interact with the complex physical processes that occur on the scale of individual storms.

‘What we’ve done is make explicit the links between the physics going on within storms themselves and the dynamics of the atmosphere at the planetary scale, said Dr Studholme.

‘This is a hard problem because this physics isn’t well simulated in numerical models run on modern computers.’

Key to the formation of tropical cyclones (aka hurricanes) are warm sea surface temperatures of at least 81°F (27°C) and converging low-level winds that force air to rise and form storm clouds. As long as the burgeoning system has enough distance from the equator, planetary spin will interact with the flow of moist rising air, causing it to rotate cyclonically. Pictured: the structure of a hurricane as seen in the Northern Hemisphere

Pictured: Earth’s atmosphere on July 22, 2017, as captured by NASA . This day was special as it featured the largest number of simultaneous tropical cyclones in the satellite record

The team noted that simulations of Earth’s past warm climates — such as found in the Eocene (56–33.9 million years ago) and Pliocene (5.3–2.6 mya) epochs — suggest that typical cyclones can form and intensify at higher latitudes than today.

The team’s finding that climate change could similarly increase the risk from tropical cyclones in the future is consistent with a number of recent studies.

In fact, the Intergovernmental Panel on Climate Change wrote in their sixth assessment report last August that they had a ‘high confidence’ that humanity’s influence on the climate was leading to a strengthening of tropical cyclones.

Alongside being able to strike populated areas that were previously out of bounds, the mid-latitude tropical cyclones enabled by climate change may sport dangerous differences from their lower latitude counterparts.

‘Tropical cyclones in the mid-latitude band could experience other changes such as slower motion and heavier rainfall,’ hurricane researcher Gan Zhang — formerly of Princeton University and who was not involved in the present study — told the BBC. 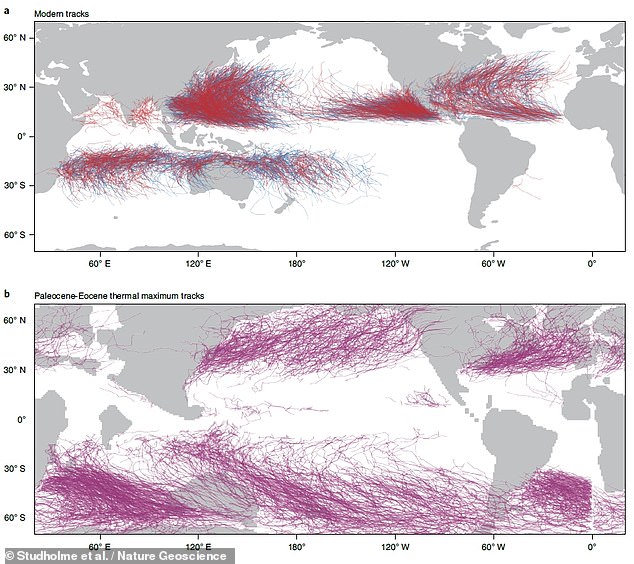 The team noted that simulations of Earth’s past warm climates — such as found in the Eocene (56–33.9 million years ago) and Pliocene (5.3–2.6 mya) epochs — suggest that typical cyclones can form and intensify at higher latitudes than today. Pictured: Tropical cyclone tracks seen in the present (top) as compared to the Eocene and the preceding Palaeocene epochs (bottom)

The team did have some good news, however — noting that tackling climate change by drastically reducing carbon emissions over the next decade could help to stop tropical cyclones from forming at mid-latitudes in the first place.

‘The control over this is the temperature gradient between the tropics and the poles, and that’s very tightly linked to overall climate change,’ Dr Studholme explained.

‘That can be very significant in terms of how these hurricanes play out.’

The full findings of the study were published in the journal Nature Geoscience.

WHAT’S IN A NAME? CYCLONES VS HURRICANES VS TYPHOONS 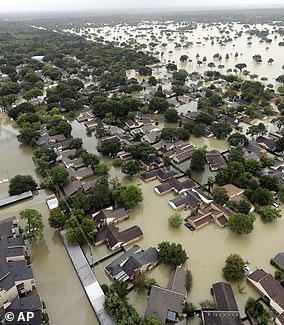 Pictured: flooding in Houston, Texas, in the wake of Hurricane Harvey in 2017. The tropical cyclone can be called a hurricane because of where on the Earth it occurred

‘Tropical cyclone’ is the generic name given by meteorologists to the rotating storm systems that are also referred to as hurricanes, typhoons, tropical storms, cyclonic storms and tropical depressions.

Specifically, hurricane is the name given to these phenomena when they are found over the Atlantic or north-eastern Pacific oceans.

The designation of typhoon, meanwhile, refers to those that occur over the  north-western Pacific, south Pacific, Indian Ocean and — very rarely — above the South Atlantic.

Regardless of the name used, all feature a rapidly rotating storm system characterised by strong winds, a spiral arrangement of thunderstorms that produce both heavy rain and sudden squalls, all of which circulate around a low-pressure centre — sometimes called the ‘eye’ of the storm.