Mothers-to-be should gain no more than 3st 11lb in pregnancy to reduce the risk of their baby getting sick, researchers say

Expectant mothers with a normal or underweight body mass index (BMI) should look to gain no more than 3st 11lb (24 kg) while pregnant so their baby doesn’t get sick.

Researchers led from Wuhan University studied data on 15.8 million pregnancies to determine the optimum amount of weight mothers-to-be should put on.

Based on their findings, they have recommended that women with higher BMIs not be encouraged to maintain or lose weight during pregnancy — but to gain less.

For example, the team have concluded that the ideal weight gain for mildly obese women during pregnancy is 18–35 lbs (8–16 kg). 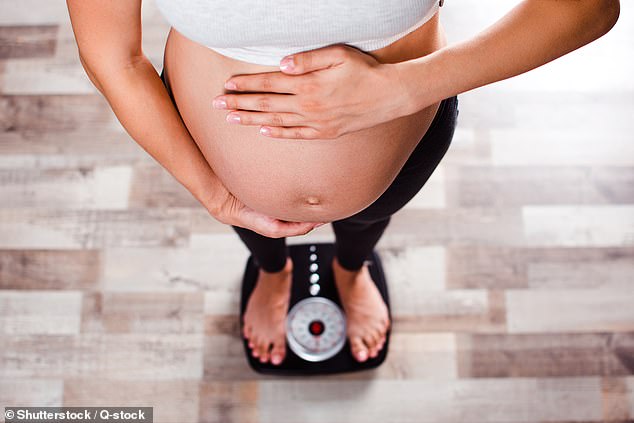 Expectant mothers with a normal or underweight body mass index (BMI) should look to gain no more than 3st 11lb (24 kg) while pregnant so their baby doesn’t get sick, a study has found

The investigation was conducted by obstetrician Huijun Chen of the Zhongnan Hospital of Wuhan University and colleagues.

‘Adverse pregnancy outcomes are associated with inappropriate gestational weight gain,’ the researchers explained in their paper.

Meanwhile, they added, excessive weight gain can lead to such ‘adverse outcomes to the offspring such as being born large for gestational age, macrosomia, and childhood obesity.’

In their study, the researchers analysed health data on some 15.8 million mother–infant pairs as recorded in the US National Center for Health Statistics database.

Focusing on singleton births within term, the team compared each mother’s BMI and gestational weight gain with any instances of significant health issues or mortality in the corresponding offspring before the age of one.

Health issues deemed significant included admission to intensive care for any reason, records of seizures and any need for therapy or assisted ventilation.

The researchers found that, for women who were underweight or normal weight at the start of their pregnancy, the ideal weight gain ranged from 1st 12.5lb to 3st 11lb (12–24 kilograms).

The results, the team said, suggest that women who are obese when they become pregnant should not be encouraged to maintain or lose weight.

Weight gain in pregnancy varies greatly. Most pregnant women gain between 10kg and 12.5kg (22lb to 26lb), putting on most of the weight after week 20.

Much of the extra weight is due to your baby growing, but your body will also be storing fat, ready to make breast milk after your baby is born.

Putting on too much or too little weight can lead to health problems for you or your unborn baby.

Gaining too much weight

Putting on too much weight can affect your health and increase your blood pressure.

But pregnancy isn’t the time to go on a diet, as it may harm the health of the unborn child.

It’s important that you eat healthily.

Gaining too much weight can increase your risk of complications.

Gaining too little weight can cause problems such as premature birth and a baby with a low birth weight (less than 2.5kg or 5.5lb at birth).

It can also mean your body isn’t storing enough fat.

Lack of weight gain can be related to your diet and weight before you become pregnant.

But some naturally slim women stay slim while they’re pregnant and have healthy babies.

Staying active is important while you’re pregnant, as it’ll prepare your body for labour and birth.

Keep up your normal daily activity or exercise, unless you have been advised by your midwife or GP not to exercise.

Advice about your weight

Your midwife or GP may have special advice for you if you weigh:

If you’re concerned about your weight or any other aspect of your health while pregnant, ask your midwife or GP for advice.