NASA and SpaceX will launch astronauts from THREE different agencies

SpaceX will launch four astronauts from three different agencies to a crowded International Space Station on Thursday, according to NASA.

This is the second routine mission since crewed space flight resumed from US soil, and the first NASA launch with three different agencies in nearly 20 years.

Liftoff for the Crew-2 mission is planned for 11:11 BST on April 22, from NASA’s Kennedy Space Center in Florida, with two NASA, one ESA and one JAXA astronauts.

The mission involves Shane Kimbrough and Megan McArthur from NASA, along with the Japan Aerospace Exploration Agency (JAXA)’s Akihiko Hoshide, and the European Space Agency (ESA)’s Thomas Pesquet. All have flown to space previously. 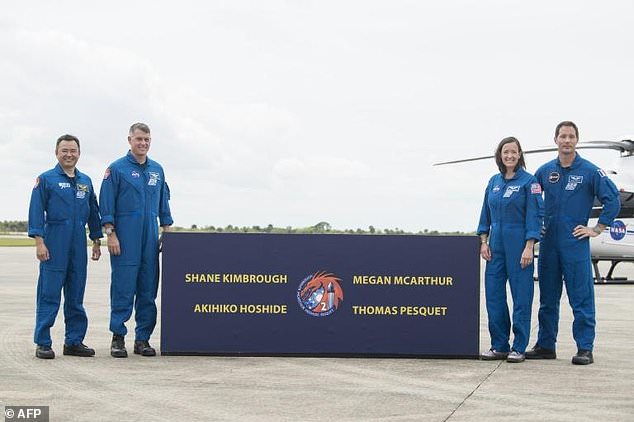 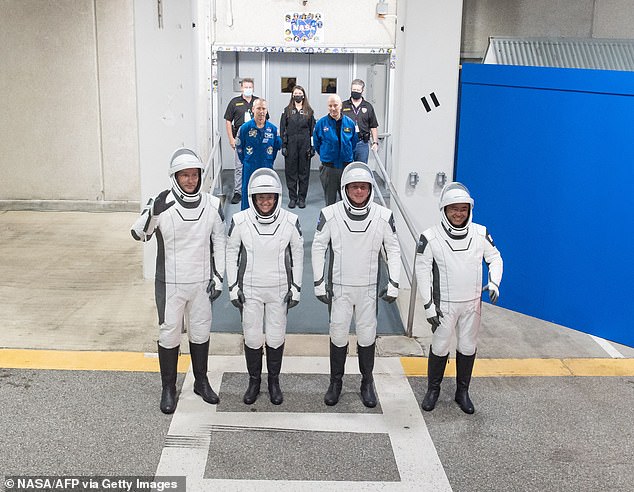 This is the second routine mission since crewed space flight resumed from US soil, and the first NASA launch with three different agencies in over 20 years

SPACEX CREW-2 FLIGHT TO THE ISS

The astronaut assignments for the Crew-2 mission were agreed in July 2020 for a flight in April 2021.

There will be two NASA astronauts, one from JAXA and one from ESA.

They will fly on the SpaceX Crew Dragon Endeavour.

The last time astronauts from three different agencies launched together from US soil was on the Space Shuttle Endeavour in 2002.

They will launch from NASA’s Kennedy Space Center in Florida at 11:11 BST on Thursday April 22.

Thursday’s flight will reuse the booster rocket used in the Crew-1 mission, and the Crew Dragon capsule will be the same as that used in the test mission.

The last time astronauts from three different space agencies launched from US soil was in 2002 on the Space Shuttle Endeavour, this time they launch on the SpaceX Crew Dragon Endeavour.

Elon Musk’s SpaceX has firmly established itself as NASA’s favoured transportation provider as the agency waits on Boeing’s troubled Starliner to carry out key tests.

SpaceX’s first crewed test flight in May 2020 ended nine years of American reliance on Russian rockets for rides to the ISS.

This followed the demise of the NASA Space Shuttle program in 2011.

Speaking to reporters ahead of the mission, Pesquet said his participation underscored Europe’s commitment to space flight, saying it ‘means a lot.’

ESA, which dubbed the mission ‘Alpha’ after the star Alpha Centauri, the closest star system to our own, has been part of the ISS program for 20 years.

‘We intend to be part of what’s coming next,’ said Pesquet, referring to future partnerships including the Artemis program to the moon.

Pesquet said flying on the fully autonomous Crew Dragon was going to be a very different experience to his last trip on the Russian Soyuz spaceship.

‘The way it’s laid out, it’s just fantastic, you know all the time what’s going on,’ he said, adding that Soyuz is reliable but difficult to understand what’s happening.

He said training to fly on Soyuz also took ‘much longer’ than preparations to leave the Earth on the Crew Dragon capsule.

The four astronauts will overlap for a few days with the astronauts that travelled to the ISS as part of Crew-1, before that team returns from its six-month mission.

With three Russians on board, the station is set to become unusually crowded, accommodating no fewer than 11 people.

Pesquet and Hoshide planned to liven up the cuisine with national dishes from their home countries, with the Frenchman planning to make crepe suzette. 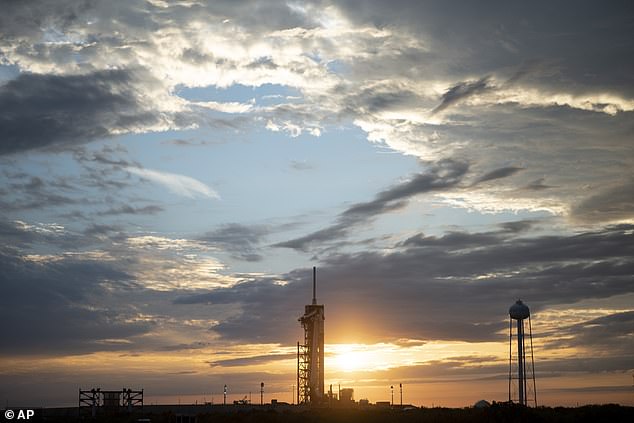 Liftoff for the Crew-2 mission is planned for 11:11 BST on April 22, from NASA’s Kennedy Space Center in Florida atop a Falcon 9 rocket, with two NASA, one ESA and one JAXA astronauts 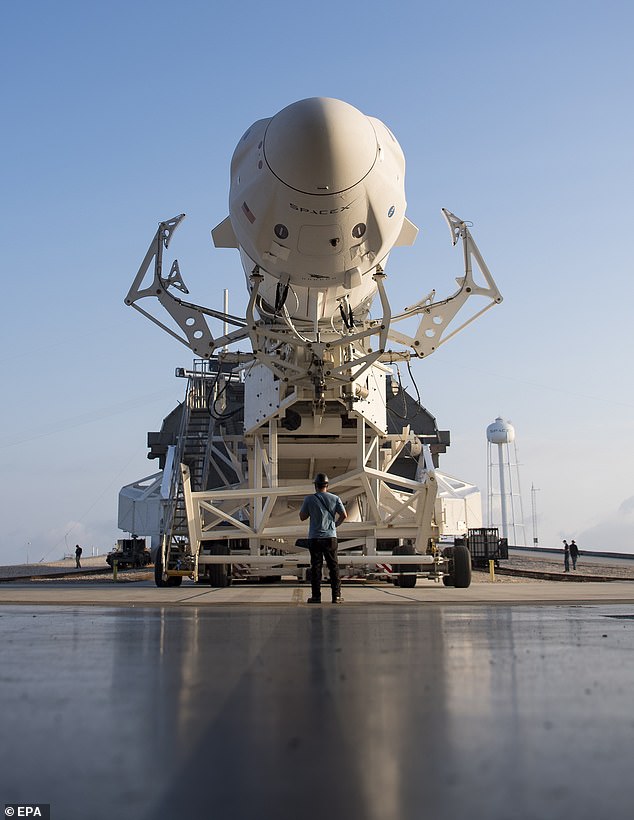 A SpaceX Falcon 9 rocket with the company’s Crew Dragon spacecraft onboard will launch for the ISS on Thursday, bringing the crew total on the station to 11 for a few days

During their mission, the crew will be tasked with carrying out numerous scientific experiments, with Pesquet singling out one examining the effects of weightlessness on brain organoids – mini brains created using stem cell technology – as a favourite.

Scientists hope this research can eventually help space agencies prepare for distance space missions which will expose crews to the rigours of space for long periods of time, and even help fight brain disease here on Earth.

‘It really sounds like science fiction to me,’ joked the aerospace engineer.

Another important element of the mission is upgrading the station’s solar power system by installing new compact panels that roll open like a huge yoga mat. 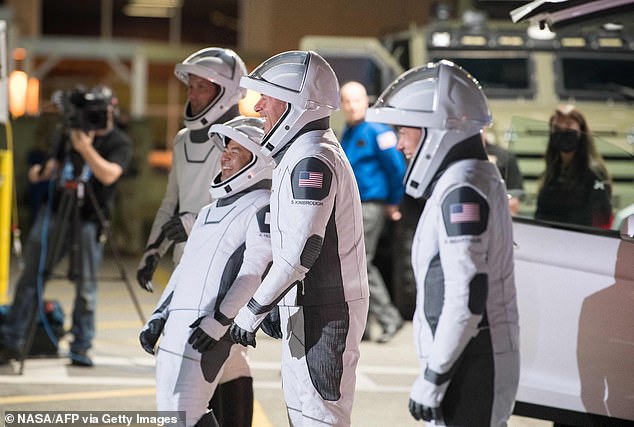 The mission involves Shane Kimbrough and Megan McArthur from NASA, along with the Japan Aerospace Exploration Agency (JAXA)’s Akihiko Hoshide, and the European Space Agency (ESA)’s Thomas Pesquet. All have flown to space previously

Crew-2’s launch day coincides with Earth Day, an annual occasion to mark the impact mankind is having on our planet.

By the time the crew returns they will have also contributed to environmental research by taking 1.5 million images of phenomena like artificial lighting at night, algal blooms, and the breakdown of Antarctic ice shelves.

Earlier this week an American astronaut and two Russians returned to Earth after six months aboard the orbiting laboratory.

A Soyuz space capsule carrying NASA’s Kate Rubins and Russians Sergey Ryzhikov and Sergey Kud-Sverchkov landed on Saturday in the steppes of Kazakhstan.

Dmitry Rogozin, head of the Russian space agency Roscosmos, said all three were feeling well after they were extracted from the capsule.