This time, NASA’s Mars robotic helicopter Ingenuity did not come back.

On Friday, Ingenuity, which last month became the first machine to fly like an airplane or a helicopter on another world, took off for the fifth time. It made a successful one-way trip to another flat patch of Mars more than the length of a football field away. The spot where it landed will serve as its base of operations for the next month at least, beginning a new phase of the mission where it will serve as a scout for its larger robotic companion, the Perseverance rover.

According to what NASA said before the flight, Ingenuity retraced the course of its previous flight, heading south for 423 feet at an altitude of 16 feet. But instead of turning around, it stopped and climbed higher, to 33 feet, to take some pictures of the area. It then set down, 110 seconds after it had taken off. 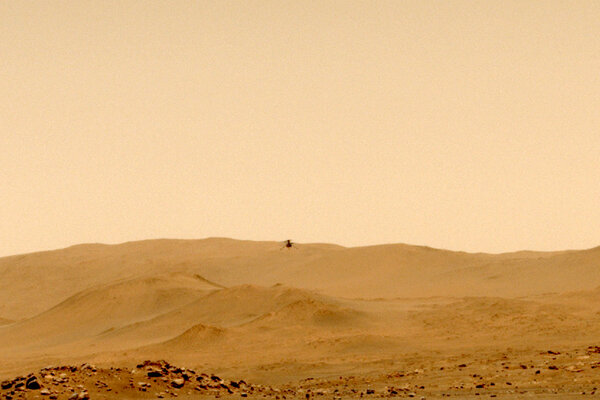 As with the previous four flights, Ingenuity flew autonomously, with no help or communication from people on Earth, executing a flight plan that had been sent hours earlier. Engineers had to wait more than three hours after Ingenuity had already landed before news of the success — relayed from Ingenuity to Perseverance to an orbiter passing overhead and then to Earth — arrived.

Ingenuity, 1.6 feet tall and weighing four pounds, is an $85 million add-on project to the $2.7 billion Perseverance mission, which is searching for signs of past life on Mars. The helicopter traveled to Mars tucked under the belly of the rover, which landed on Mars in February.

In NASA’s original plans, after the helicopter was dropped onto the ground in early April, the Ingenuity team had a month and up to five flights to demonstrate that controlled, powered flying was possible on Mars, where the atmosphere at the surface is just 1 percent as dense as Earth’s. Ingenuity was to have been left behind, and Perseverance would have headed off to conduct its scientific explorations.

But the mission’s managers at NASA changed their minds.

In a blog post, Joshua Ravich, Ingenuity’s mechanical engineering lead, said the power system, the heaters, the navigation system and the rotors were all working well. “Our helicopter is even more robust than we had hoped,” he wrote.

That opened the door to using Ingenuity not only as a proof of the basic technology but also to provide aerial reconnaissance of the surrounding landscape for the Perseverance scientists, who have decided that they want the rover to explore the neighboring areas for several months.

The fourth flight scouted a new location for the helicopter to land. “The digital elevation maps put together by the Ingenuity team gave us confidence that our new airfield is flat as a pancake — a good thing when you have to land on it,” Mr. Ravich said.

During the fourth flight, Perseverance, parked more than 250 feet from the helicopter, successfully recorded the sound of Ingenuity’s rotors slicing through the Martian air.

Listen to the Helicopter’s Hum

“We have been lucky to register the helicopter at such a distance,” David Mimoun, the science lead for the microphone, said in a NASA news release. “This recording will be a gold mine for our understanding of the Martian atmosphere.”

After the move of Ingenuity to its new base, the focus of the Perseverance team now shifts to its scientific studies, which have been largely on hold during the test flights.

Ingenuity is expected to make just to make one or two more flights this month, taking off when there is time amid Perseverance’s other activities.

But if that all goes well, Ingenuity could continue tagging along with Perseverance across the Martian landscape.