Crew-2 carried four astronauts to the International Space Station (ISS), and can be seen rising into the air and spreading a plume of light through the sky.

As Crew-2 disappears over the horizon, the landing plume of the returning first stage of the Falcon 9 is seen falling towards a SpaceX pad in the Atlantic Ocean, allowing it to be reused for future missions.

The capsule successfully docked with the ISS more than 260 miles above the Indian Ocean, just a day after launch.

The four astronauts on-board Crew-2 – Shane Kimbrough and Megan McArthur (from the US), Thomas Pesquet (France) and Akihiko Hoshide (Japan) – will now spend six months at the space station.

NASA shared the video of the launch on ‘Astronomy Picture of the Day’ – a website provided by the space agency and Michigan Technological University.

‘But then it lit up with a rocket launch. Just to the north, NASA’s SpaceX Crew-2 Mission blasted into space aboard a powerful Falcon 9 rocket.’

The time-lapse video – which compresses 12 minutes into eight seconds – shows the bright launch plume starting on the far left. 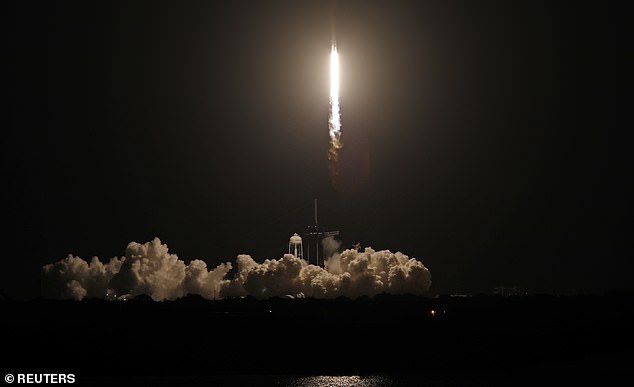 The astronauts from the US, Japan and France, blasted off from Pad 39A at NASA’s Kennedy Space Center in Cape Canaveral, Florida at 10:49 BST

The rocket rises into an increasingly thin atmosphere, causing its plume to spread out just as it is lit by the rising Sun.

‘As the Crew-2 capsule disappears over the horizon, the landing plume of the returning first stage of the Falcon 9 descending toward the SpaceX barge in the Atlantic Ocean can be seen,’ NASA says.

About 10 minutes after launch, travelling at about 10,000 miles per hour, Falcon 9’s second stage delivered the Crew Dragon and its astronauts into a nominal orbit. 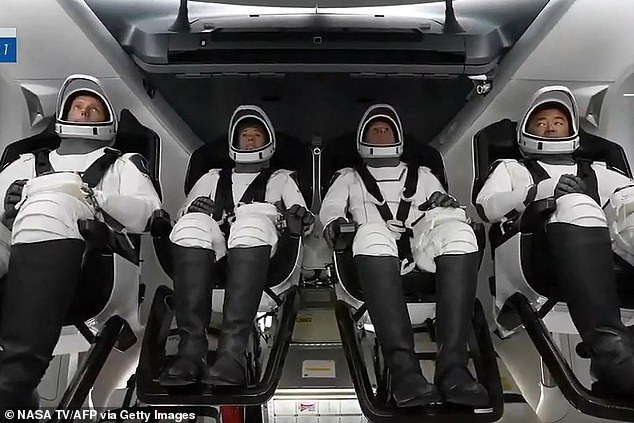 They arrived at the International Space Station at about 10:10 BST on Saturday, where they were warmly welcomed by the existing crew.

Their arrival brought the total number of people on the ISS to 11, which will fall to seven when the four members of Crew-1 make their journey back to Earth and splash down this Wednesday.

Eleven is the most people ever on the ISS. Eight of the 11 arrived on a commercial spaceship (SpaceX Crew Dragon), while the other three arrived in a Russian Soyuz capsule.

The ISS, orbiting 253 miles above the planet, is designed to hold seven astronauts, but that can increase when a capsule is docked, such as the Crew-2 mission capsule that took the new foursome to the station. 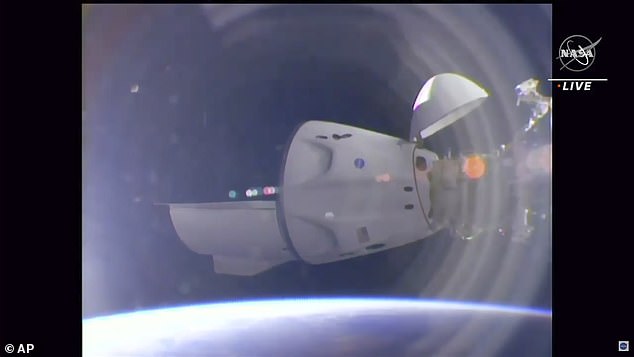 The SpaceX Crew Dragon, and its four astronauts, is seen safely docked in this impressive picture from Nasa TV

Friday’s mission became the first SpaceX launch to reuse both a capsule and Falcon 9 from previous launches.

The same rocket took Crew-1 to the ISS and the capsule was used in ‘Launch America’ in May 2020.

Although this was SpaceX’s third crew flight for NASA, it was the first to use a vehicle that has flown before, an essential part of Musk’s push to the Moon and Mars.

One of the team – Thomas Pesquet, the French astronaut representing the European Space Agency –  plans to dine like a king with a smorgasbord of treats that are unlike any space food before.

He and his crewmates will feast on dishes prepared by three separate French culinary institutions, but the meals are only for special occasions.

‘There’s a lot of expectations when you send a Frenchman into space,’ Pesquet said during a European Space Agency news conference last month. ‘I’m a terrible cook myself, but it’s OK if people are doing it for me.’ 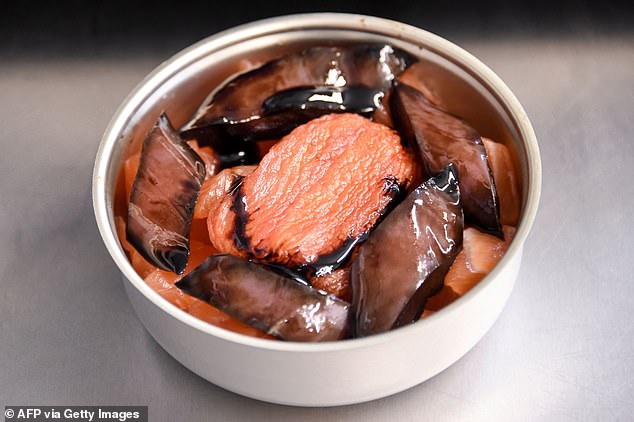 This picture taken in Pouldreuzic, near Brest, western France, on April 20, 2021 shows a low-temperature cooked salmon prepared at the canning factory Henaff by the French chef Alain Ducasse’s team (R) for the French astronaut Thomas Pesquet

WHO ARE THE CREW-2 ASTRONAUTS?

The four veteran astronauts reached the ISS on Saturday (April 24) for their six-month stay. They are:

A retired Army colonel who led a helicopter platoon during the 1991 Gulf War.

He taught math at the US Military Academy and jumped out of planes for the Army, before moving to Houston in 2000 to work with NASA´s shuttle training aircraft.

He became an astronaut in 2004, flying on the shuttle in 2008 and launching eight years later in a Russian capsule to the space station he helped build.

McArthur is flying in the same seat as husband Bob Behnken did during SpaceX’s debut crew launch nearly a year ago.

It’s been 11 years since she last rocketed into orbit, aboard a shuttle on NASA’s final Hubble Space Telescope repair mission.

McArthur conducted graduate research in underwater acoustics at the Scripps Institution of Oceanography, led diving expeditions and tested water equipment. She became an astronaut in 2000.

He was flying for Air France when the European Space Agency chose him as an astronaut 12 years ago.

He joined the French Space Agency as an engineer in 2002. Two years later, Air France tapped him for its flight training program.

Pesquet launched on a Russian Soyuz rocket to the space station in 2016 for a six-month mission.

He joined the Japanese Space Agency right out of college in 1992 as an engineer, working on the H-II rocket.

He made the astronaut cut seven years later and helped develop Japan´s Kibo lab for the space station.

He installed Kibo, or Hope, in 2008, launching aboard shuttle Discovery. Hoshide returned to the station in 2012 for six months, flying from Kazakhstan.