A pioneering project to knock an asteroid off course has the potential to give the mankind a defence against future Earth-killers similar to the one which did for the dinosaurs, a British expert has said. The Double Asteroid Redirection Test (DART) spacecraft, built by NASA, is scheduled to crash into Dimorphos, a small asteroid as part of a planetary protection test mission.

While the experiment poses no threat to Earth, with the aim of the mission being to demonstrate that dangerous incoming rocks can be deflected by deliberately smashing into them.

Professor Alan Fitzsimmons from Queen’s University Belfast, a member of the NASA DART Investigation Team, and the ESA Hera Science Management Board, told Express.co.uk: The Russian city of Chelyabinsk back in 2013 injured 1,600 People, and a bigger one hit Earth 66 million years ago and wiped out much of the life on the planet, including the dinosaurs.

“This is a natural process and it will happen again in the future – except that now we’re possibly in a position where we could stop it.”

Prof Simmons explained: ”We believe we have the technological capability to change the path of a small asteroid at least, so that if it were to hit us in the future, we put it onto a safe course. 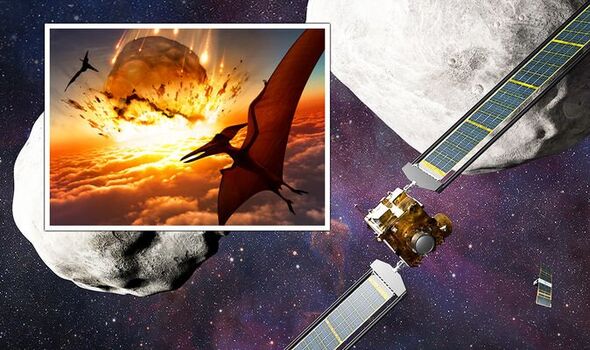 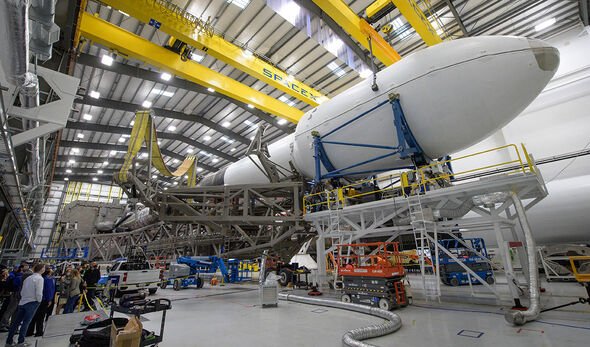 “However, we can do as many calculations and simulations as we like, and we have, but you need to test it in practice, because there is so much uncertainty coming out of our calculations as to what will happen, that we need to actually do that experiment.”

The purpose of DART was to show that it was possible to hit a small asteroid at high velocity with a spacecraft and in doing so change its trajectory, Prof Fitzsimmons said.

Asked whether it would work, he added: “Yes. This has been looked at extremely carefully by some of the best scientists and engineers in the business and it’s been tested and simulated many many, many times.

“So we are absolutely 100 percent confident it will work.

The reason that we are uncertain as to what will happen is because we don’t know how well it would work or how far the Dart will move the asteroid, and that’s one of the important numbers we’ll get out of this test.” 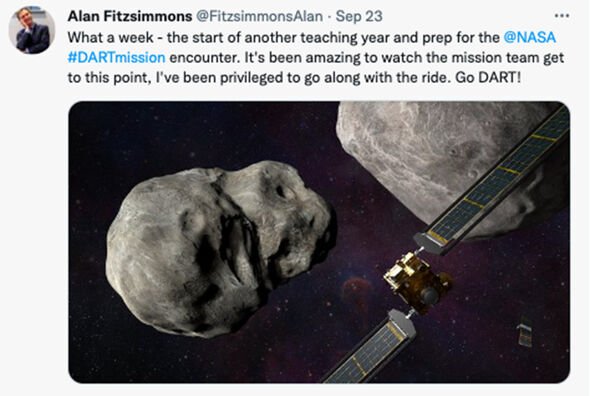 As for the implications of a successful test, Prof Fitzsimmons said: “We have to be careful because when we do encounter, at some point in the future, an asteroid that is going to hit us, and it will happen someday, maybe not in our lifetimes, then it will depend exactly on what is the path of the asteroid, how large is it and certain and what’s its structure, how easy is it to move?

“But the important thing is that all those factors come into play in terms of how we might plan to deflect an asteroid deflection, and each time we put in those parameters, we can calculate things slightly differently and come up with different answers.

“What DART will do is give us an anchor point, it will say we know that if we hit an asteroid that’s like this with something like DART, this is what happens.

“That’s going to put all of our calculations on a much firmer footing for a future time when we have to do this in earnest.”

From Covid to the war in Ukraine, and crises involving cost of living and shortages of fuel and gas, Prof Fitzsimmons conceded much of the Earth’s attention was currently preoccupied with danger of a more domestic nature. 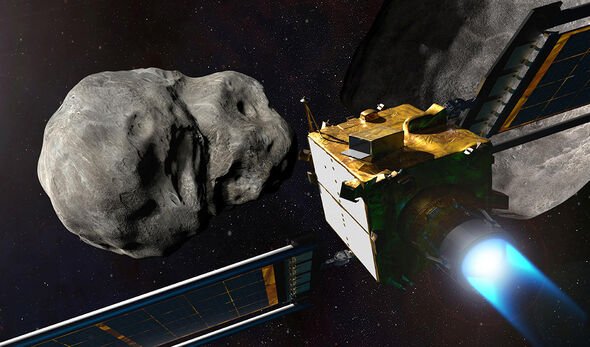 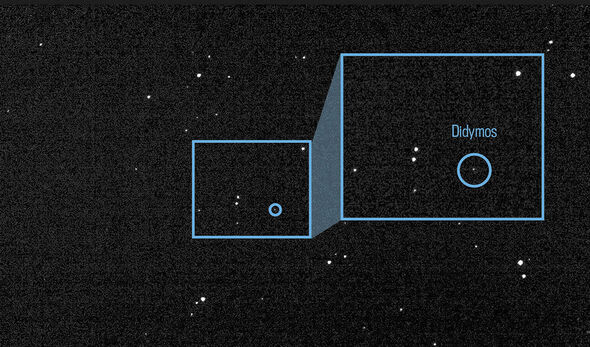 He said: “We’re not saying that the threat from asteroid impacts is any more or any more any less dangerous than any other threat and of course, we know that some things are probably going to affect us much sooner than an incoming asteroid – global war, for example.

“But as I said, this is that this is just another natural hazard that our civilisation has to cope with but amazingly, we’re now in a position where we might be able to do something.

“And in fact, compared with other natural hazards and natural disasters, asteroid impacts are kind of in a field of their own.

“Because if you look at earthquakes, tsunamis, even volcanic eruptions, most of the time, we have very little warning. Asteroid impacts are very different.

“With our telescopes surveys and the new facilities coming online and the new techniques we deal with all the time, we would hope that in the future, not only do we know an asteroid impact is going to happen, but we will be able to tell you exactly when and where.” 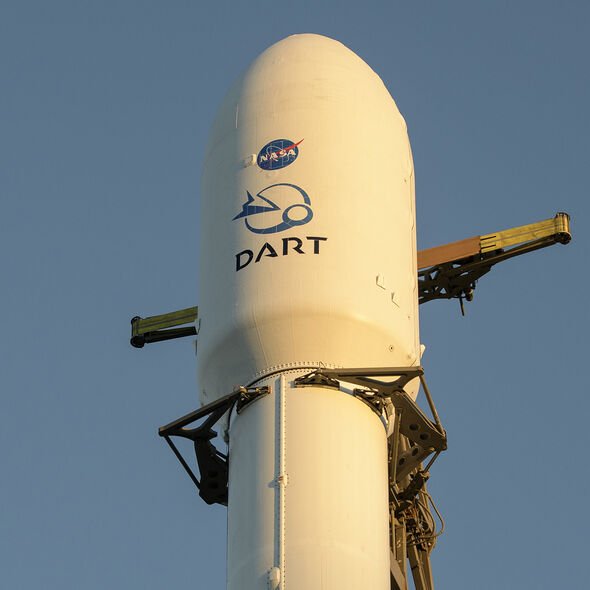 Prof Fitzsimmons admitted such specific knowledge would be somewhat alarming but added: “The important thing is that we’ve got very good over the past 20 or 30 years at finding asteroids that come near the Earth in our solar system.

“We’ve got very good at tracking them, calculating where they’re going in the future and we’ve also got a great deal of expertise now in figuring out what they’re made up on what they’re like.

“But the end chain of that sequence of events, which is knowing what to do with one of those asteroids, if it is going to cause a threat to us, that’s something we still haven’t tested up until now.”

Dimorphos is part of a binary asteroid system and orbits Didymos, which takes around 11 hours and 55 minutes. 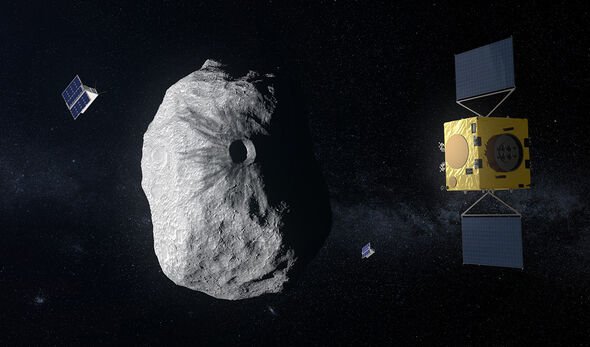 However, astronomers at Nasa are hoping that Dart, while destroying itself in the process, will shorten this orbital period by about 10 minutes.

Speaking on Thursday, a NASA spokesman said: “Dart’s target asteroid is not a threat to Earth but is the perfect testing ground to see if this method of asteroid deflection – known as the kinetic impactor technique – would be a viable way to protect our planet if an asteroid on a collision course with Earth were discovered in the future.”

There currently roughly 27,000 asteroids in near-Earth orbit. Rocks which are 140 metres (460ft) and larger in size and come nearer than 4.7 million miles (7.5 million km) during orbit are classed as potentially hazardous asteroids (PHAs).

The Dart mission will be the first ever full-scale demonstration of asteroid deflection technology.

The spacecraft recently captured its first images of Didymos and Dimorphos using an onboard instrument, known as the Didymos Reconnaissance and Asteroid Camera for Optical navigation (Draco).

It was about 20 million miles (32 million km) away from the asteroid system when it took the photos in July.

It has taken 10 months for Dart to come close to Dimorphous after launching last November on SpaceX’s Falcon 9 rocket.

The asteroids will be around 6.8 million miles (11 million kilometres) from Earth when the collision happens.

Dart will accelerate at about 15,000 miles per hour (24,140 kilometres per hour) before colliding with Dimorphos.

This collision will be recorded by a briefcase-sized satellite known as the Light Italian CubeSat for Imaging of Asteroids (LICIACube), which was provided by the Italian Space Agency.