The first-ever mission to the Trojan Asteroids, Lucy will travel some 4 billion miles and lifted off aboard the United Launch Alliance (ULA) Atlas V rocket.

Lucy’s prime mission is nearly 12 years long, during which it will visit eight asteroids – a Main Belt asteroid and seven Trojans – that have been sharing an orbit with Jupiter at the planet’s Lagrange points as it goes around the sun for billions of years.

Lagrange points are places around a planet’s orbit where the gravitational pull of the planet and the sun and the motion of the orbit combine to create an equilibrium.

The asteroids are thought to be remnants of the primordial material that formed the outer planets and scientists say that studying them will give them important clues about the formation of the Solar System.

The Lucy spacecraft sits atop a United Launch Alliance Atlas V rocket ready for launch at Launch Complex 41 at the Cape Canaveral Space Force Station, Friday, Oct. 15, 2021, in Cape Canaveral, Fla.  Lucy, scheduled to launch Saturday at 5:34am will observe Trojan asteroids, a unique family of asteroids that orbit the sun in front of and behind Jupiter.
(AP Photo/John Raoux)

No other space mission in history has been launched to as many different destinations in independent orbits around the sun, NASA notes.

Lucy – traveling at an average cruising speed of 39,000 mph and 15,000 mph as it flies by each asteroid – will also be the first spacecraft to journey a bit farther than the distance of Jupiter and return to the vicinity of the Earth for a final gravity assist that will send it back out to its final Trojan encounters.

Scientists selected several targets to study and will use several instruments to gather visual, compositional and physical information.

Lucy, which measures more than 51 feet wide with two giant solar panels needed to power the spacecraft, has a High Gain Antenna needed to communicate with Earth that is located on the spacecraft’s body. 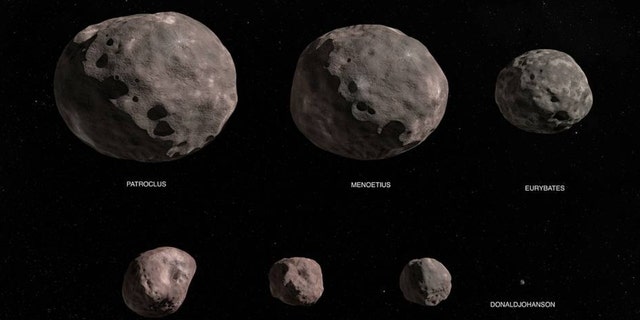 Also on its body, the Lucy Thermal Emission Spectrometer (L’TES) will measure the asteroids’ surface temperature by observing the thermal infrared spectrum, the Lucy Long Range Reconnaissance Imager (L’LORRI) high-resolution, panchromatic visible camera will provide detailed surface images and L’Ralph has an infrared imaging spectrometer that will reveal absorption lines that service as fingerprints for different silicates, ices and organics in addition to the L’Ralph Multi-spectral Visible Imaging Camera (MVIC) that will take color images of the Trojans to help determine their composition.

Lucy will also be able to use its terminal tracking cameras (T2CAM) to track the asteroids as it passes within 600 miles of each target.

In addition to the spectrographs and robotic cameras, Lucy uses Doppler tracing to measure mass.

Plus, Lucy will operate farther from the sun than any previous solar-powered spacecraft.

At 7:09 a.m. EDT, NASA tweeted that the $981 Lucy mission had “successfully deployed its solar panels, and now its epic journey to Jupiter’s Trojan asteroids is officially underway.”

Although Lucy carries a large artificial diamond that will split light beams in its far-infrared spectrometer instrument, the mission is not named for The Beatles’ famous “Lucy in the Sky With Diamonds.”

Instead, Lucy was chosen in honor of the fossilized human ancestor that was found in Ethiopia in 1974 and given the same name.

“To be out here this morning is absolutely mind-expanding… to see what the creativity of the human mind can do,” paleoanthropologist Donald Johanson, who found the fossil, told NASA in an interview from the Lucy launch site.

At the end of the mission, Lucy will continue on a stable orbit, traveling from near the Earth’s orbit and then heading out into the Trojan swarms.

“The team has carefully planned so that Lucy will not hit the Earth or contaminate any place that might have life for well over 100,000 years,” NASA wrote on its website. “If no future humans collect Lucy as a historical artifact of the early days of Solar System exploration, then Lucy’s orbit will eventually become unstable, and Jupiter will most likely send the spaceship into the sun or fling it out of the Solar System.”

launches, Lucy, NASAs, t, to
You may also like: