After billions of dollars and a decade of work, NASA’s plans to send astronauts back to the moon had a new setback on Saturday. A planned eight-minute test firing of the four engines of a new mega rocket needed for the moon missions came to an abrupt end after only about a minute.

As engineers disentangle what went wrong, the first launch of the rocket is likely to slip further into the future, and NASA astronauts may have to wait longer before setting foot on the moon again.

NASA officials, however, said that it was too early to predict delays, if any. “I don’t think at this point that we have enough information to know,” Jim Bridenstine, the NASA administrator, said during a news conference after the test. “It depends what the anomaly was and how challenging it’s going to be to fix it.”

John Honeycutt, the program manager at NASA for the rocket, said it was too early to know whether the failure was one of hardware, software or a sensor. “It’s one of these things where the team is going to pore through the data,” he said.

The rocket, known as the Space Launch System, has yet to travel to space, and Saturday’s test was intended to be a key milestone. For the first time, the four engines on the booster stage were set to be fired for about eight minutes, simulating what they would do during an actual launch.

The vehicle is a key component for Artemis, the program that is intended to take NASA astronauts back to the moon in the coming years. Although President Trump pledged to make the trip by the end of 2024, few expected that NASA would actually meet that timeline. 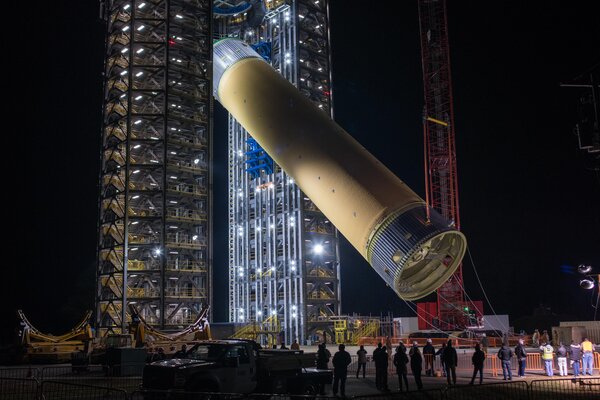 Often abbreviated as S.L.S., the rocket is the 21st-century equivalent of the Saturn V that took NASA astronauts to the moon in the 1960s and 1970s. Although there are many other rockets available today, they are too small to launch spacecraft that can carry people to the moon. (A possible exception is SpaceX’s Falcon Heavy, but a human lunar mission would require two launches.)

The initial version of the S.L.S. is capable of lifting 70 metric tons, and future versions of the rocket will be able to loft up to 130 metric tons, more than the rockets that carried the Apollo astronauts.

Although the Space Launch System will be expensive — up to $2 billion a launch for a rocket that can be used only once — Congress has provided steadfast financial support for it so far. Supporters maintain that it is important for the government to own and operate its own powerful deep-space rocket, and pieces of the system are built by companies across the country, spreading the economic benefits to many states and congressional districts.

The booster used in Saturday’s test was scheduled to head off to space in November in an uncrewed test flight, a mission called Artemis 1, that is to carry a capsule around the moon and back. But instead of packing the booster for shipment to the Kennedy Space Center in Florida, engineers will now have to first investigate what went wrong.

By design, the booster was not going anywhere on Saturday. It was firmly held to the ground in a test stand at NASA’s Stennis Space Center in Mississippi.

After a series of shifts of when the test would occur, ignition of the engines started smoothly at 5:27 p.m. Eastern time, with white clouds billowing out of the test stand. But about 50 seconds after ignition, one of the controllers said, “M.C.F. on Engine 4.” M.C.F. is an abbreviation for “major component failure.”

A flash was seen around the engine that was experiencing problems. The automated software on the rocket shut down all of the engines.

While the rocket is new, the engines are not. They are the same ones that were flown to orbit on NASA’s space shuttles; two were used on the final shuttle flight in 2011. For the new rocket, the space shuttle main engines have been refurbished and upgraded and given a new name: RS-25.

After the booster stage was built at NASA’s Michoud Assembly Facility in New Orleans, it was shipped to Stennis and mounted on the same test stand that was used in the 1960s to test the first stage of the Saturn V.

Engineers then began a series of tests, which NASA called the green run, to validate the rocket’s systems. Saturday’s test firing was intended to be the culmination of the green run. It was set to last 8 minutes 10 seconds.

At a news conference on Tuesday, John Shannon, the Space Launch System manager at Boeing, which built the booster, said that engineers would have gathered all of the engineering data they needed after about 250 seconds. But Saturday’s test ended after only about 80 seconds.

Before moving the booster to Stennis, NASA officials had considered skipping the green run in hopes of launching the Artemis 1 mission to the moon sooner. When NASA first announced plans for the S.L.S. in 2011, it aimed for the first uncrewed test launch to occur in 2017. With the latest setback, that launch almost certainly will not occur until 2022 at the earliest.

If the engines were to shut down during the Artemis 1 launch as they did on Saturday, the rocket might not make it to orbit, and the mission would be a failure.

But as this occurred on the ground, engineers will be able to diagnose the problem and fix it.

“This is not a failure,” said Mr. Bridenstine, who will step down when President-elect Joseph R. Biden Jr. is inaugurated next week. “This is a test.”

Engine, missi, Nasa, rocket, Space
You may also like: