Trying to reduce your salt intake? Japanese scientists develop an electric SPOON that zaps your tongue to enhance the salty taste of low-sodium foods – and it could go on sale this year

If that New Year health kick to slash your salt intake has been a struggle, perhaps this futuristic new utensil could help.

Scientists at Meiji University in Japan have developed an electric spoon that zaps your tongue to enhance the salty taste of bland food, giving you all the benefits of a sodium hit without the fear of your blood pressure sky rocketing.

It works with the help of electric waves to transfer sodium ions or ‘electric salt’ into your mouth.

The invention – which is expected to go on sale later this year for an as yet undisclosed price – is so effective that it enhances the salty taste of low sodium foods by 1.5 times, the researchers say. 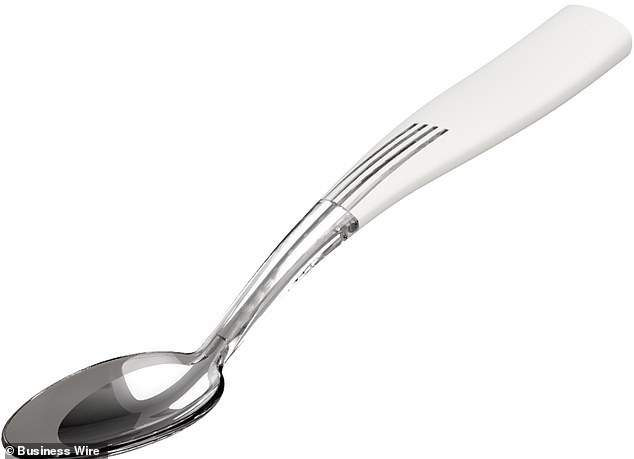 Scientists at Meiji University in Japan have developed an electric spoon that zaps your tongue to enhance the salty taste of low sodium foods. Pictured: The Electric Salt spoon

Adults should eat no more than 6g of salt a day (2.4g sodium) – that’s around 1 teaspoon

The scientists, along with the beverage maker Kirin Holdings Co, hope that the spoon and bowl set will help improve people’s lifestyles, with the Electric Salt device launching in 2023.

In Japan the daily salt intake of was 10.9 grams for men and 9.3 grams for women over the age of 20 – much higher than the World Health Organization’s recommendation of 5g a day.

Excess sodium intake is related to increased incidence of high blood pressure, strokes and other ailments.

The Electronic Taste Sensation technology works by using a very weak electrical current to transfer the electric salt to an individual’s mouth.

It does not have any effect on the human body, instead changing the way food tastes through a pseudo-sensory perception.

Clinical tests revealed that the saltiness of food was enhanced 1.5 times when testing people who were trying to reduce salt.

Dr Homei Miyashita had been looking into the problem of salt intake in Japan since 2019, carrying out a number of tests and surveys.

One survey questioned 120 men and women aged 30-69 who were trying to reduce their salt intake. 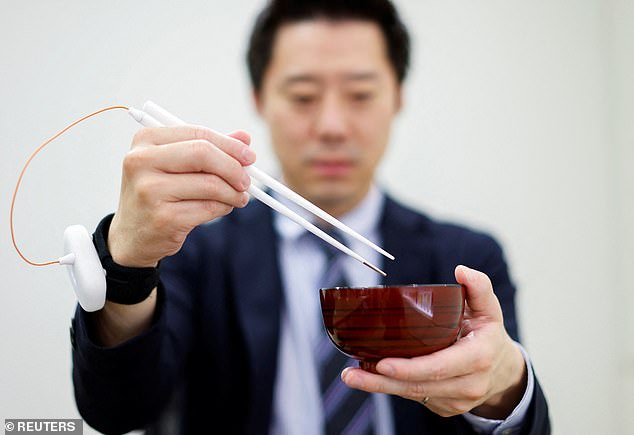 The researchers also previously developed electric chopsticks (pictured) that transmit sodium ions to your mouth via a wristband, to recreate the sensation of saltiness 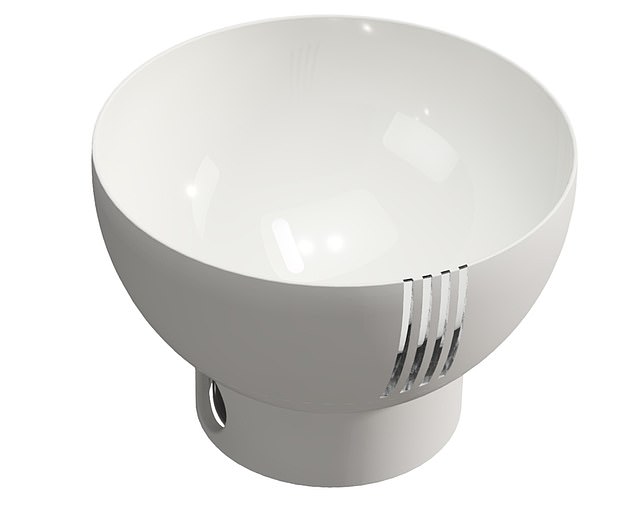 Clinical tests revealed that the saltiness of food was enhanced 1.5 times when people trying to reduce salt used the bowl and spoon

How does the Electric Salt Spoon work?

The power can be turned on with the handle of the spoon.

The user can then pick how intense they want the salt flavour to be – there are four levels.

Then use the spoon the same way as normal.

The weak electrical current will pass through the food to produce the effect.

It showed that people trying to cut down on salt intake were looking to avoid eating Raman noodles and Miso soup, ranking as the top two foods that people wanting to reduce their salt intake wanted to eat.

However, they felt that cutting down salt in these meals left them feeling dissatisfied with the taste.

The new spoon and bowl aims to eliminate the need for extra salt while making food still enjoyable.

It is not the first time Professor Miyashita and his lab have explored ways that technology can interact with and stimulate human sensory experiences.

The same researchers developed an electric chopstick that transmitted sodium ions to your mouth but this time via a wristband to recreate the sensation of saltiness.

As with the new spoon, the device uses a weak electrical current to transmit sodium ions from food, through the chopsticks, to the mouth where they create a sense of saltiness, said Professor Miyashita.

Kirin researcher Ai Sato said at the time: ‘To prevent these diseases, we need to reduce the amount of salt we take.

‘If we try to avoid taking less salt in a conventional way, we would need to endure the pain of cutting our favourite food from our diet or endure eating bland food.’

The device called Taste the TV (TTTV) contained 10 different flavour canisters, which sprayed test samples onto the screen depending on what was being shown during the show.

It is an experimental technology, with its developers expecting a commercial version to cost about £650 ($875).

This isn’t the first time that Professor Miyashita and his lab have explored ways that technology can interact with and stimulate human sensory experiences.

The device is called Taste the TV (TTTV) and contains a carousel of 10 flavour canisters that can spray taste samples on to the surface of the screen.

The different flavour profiles in the canisters can then combine to create tastes similar to those being shown on screen – for example coffee or pizza.

It is an experimental technology, produced by Meiji University in Tokyo, Japan, with its developers expecting a commercial version to cost about £650 ($875). 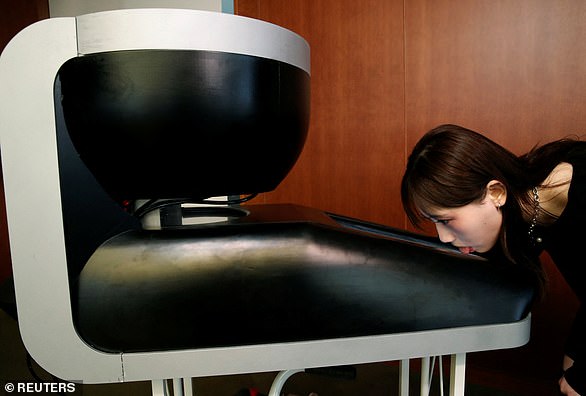 Japanese scientists have developed a television that can be licked, allowing viewers to taste the food being prepared on a cookery show, adding a layer of immersion