Incredible new images of Orion’s fireplace, the Flame Nebula, have been shared by the European Southern Observatory (ESO), revealing a ‘spectacular firework display.’

It was taken with the ESO-operated Atacama Pathfinder Experiment (APEX), located on the cold Chajnantor Plateau in Chile’s Atacama Desert.

The flame nebula sits within the constellation of Orion, about 1,500 light years from the Earth, with a cluster of newly formed stars sitting at its centre.

The new image, released to celebrate the start of the New Year, was part of the APEX Large CO Heterodyne Orion Legacy Survey (ALCOHOLS), which looked at the radio waves emitted by carbon monoxide (CO) in the Orion clouds.

Dubbed Orion’s Fireplace, the nebula is a cloud of dust and gas, as well as nursery for new stars that emit high-energy radiation, causing the surrounding gas to glow. 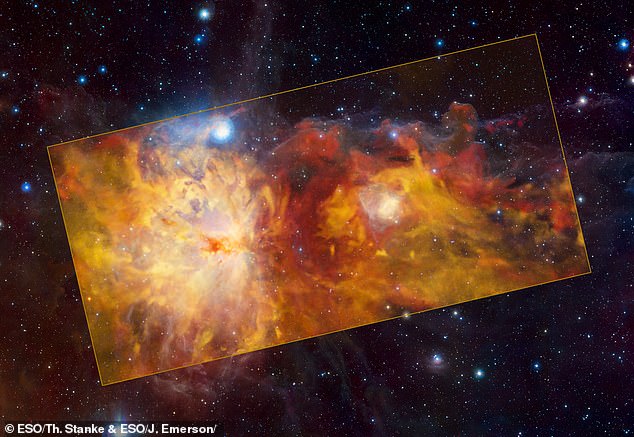 Incredible new images of Orion’s fireplace, the Flame Nebula, have been shared by the European Southern Observatory (ESO), revealing a ‘spectacular firework display’

It was taken with the ESO-operated Atacama Pathfinder Experiment (APEX), located on the cold Chajnantor Plateau in Chile’s Atacama Desert

WHAT IS THE ORION NEBULA?

The nebula can be seen with the naked eye near the constellation Orion.

It is the closest region of massive star formation to Earth and has a mass about 2000 times that of the sun.

The Orion Nebula has revealed a lot about how stars are created from collapsing clouds of gas and dust.

Smaller nebulae like the Horsehead Nebula also make an appearance in this new image of the Flame Nebula.

The image is based on observations by former ESO astronomer Thomas Stanke and his team over a few years.

They wanted to try the SuperCam instrument at APEX and pointed it towards the constellation of Orion – one of the most studied in the galaxy.

‘As astronomers say, whenever there is a new telescope around, observe Orion: there will always be something new and interesting to discover!’ said Stanke.

Orion is one of the most famous regions in the night sky, home to the giant molecular clouds closest to the Sun.

These are vast cosmic objects that are made up mainly of hydrogen, and are where new stars and planets form.

The clouds pictured by ESO astronomers feature the most active stellar nursery in the Solar System’s neighbourhood, as well as the Flame Nebula depicted.

This ’emission’ nebula harbours a cluster of young stars at its centre that emit high-energy radiation, making the surrounding gases shine.

In addition to the Flame Nebula and its surroundings, Stanke and his collaborators were able to capture a wide range of other spectacular objects.

Using the carbon monoxide molecule to probe wide areas of the sky is the primary goal of SuperCam, allowing astronomers to map gas clouds that birth new stars.

Unlike what the ‘fire’ of this image might suggest, these clouds are actually cold, with temperatures typically just a few tens of degrees above absolute zero.

Absolute zero is the theoretical limit for how cold something can be, the point where atoms no longer move – set at zero kelvin, or minus 459.67 degrees Fahrenheit. 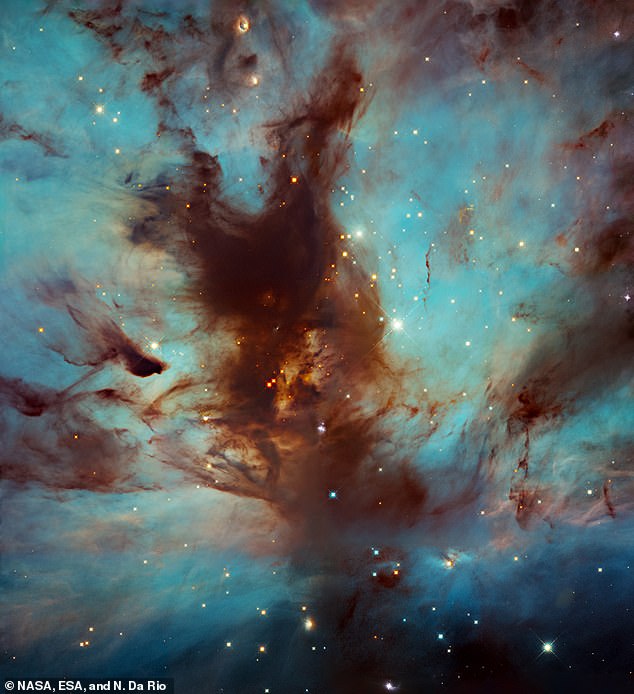 The Flame Nebula, also called NGC 2024, is part of the Orion Molecular Cloud Complex and is found near the Horsehead Nebula. Picture taken using the Hubble Space Telescope 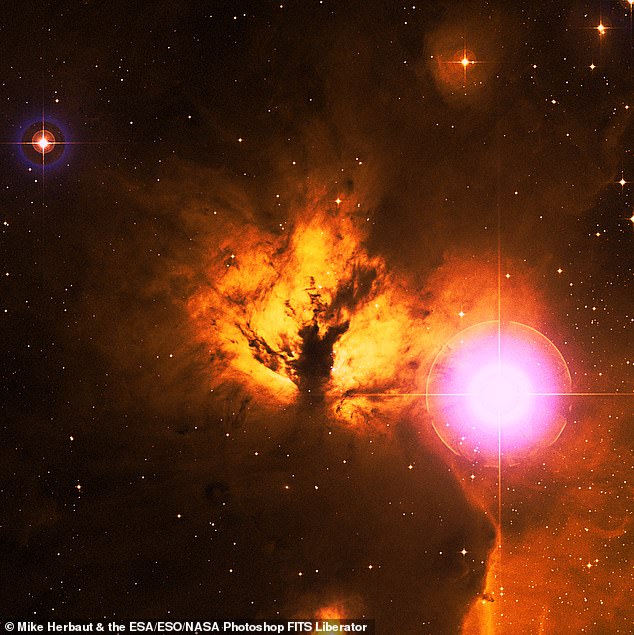 Given the many secrets it can tell, this region of the sky has been scanned many times in the past at different wavelengths, each wavelength range unveiling different, unique features of Orion’s molecular clouds.

One example are the infrared observations performed with ESO’s Visible and Infrared Survey Telescope for Astronomy (VISTA) at the Paranal Observatory in Chile that make up the peaceful background of this image of the Flame Nebula.

Unlike visible light, infrared waves pass through the clouds of interstellar dust, allowing astronomers to spot stars which would otherwise be hidden.

Details of the observation and its revelations have been accepted for publication in the journal Astronomy & Astrophysics.

According to our current understanding, a star and its planets form out of a collapsing cloud of dust and gas within a larger cloud called a nebula.

As gravity pulls material in the collapsing cloud closer together, the centre of the cloud gets more and more compressed and, in turn, gets hotter.

This dense, hot core becomes the kernel of a new star.

Meanwhile, inherent motions within the collapsing cloud cause it to churn.

As the cloud gets exceedingly compressed, much of the cloud begins rotating in the same direction.

The rotating cloud eventually flattens into a disk that gets thinner as it spins, kind of like a spinning clump of dough flattening into the shape of a pizza.

These ‘circumstellar’ or ‘protoplanetary’ disks, as astronomers call them, are the birthplaces of planets.