The ‘holy grail’ of batteries: Scientists develop an ‘iron-air’ battery that stores electricity for days through rusting – and is a fraction of the cost of lithium-ion equivalents

An ‘iron-air’ battery has been developed in the US that can store electricity from wind or solar power stations for days at a time, slowly discharging it to the grid.

It will help tackle climate change by reducing the need for fossil fuel power plants, according to technology startup Form Energy, from Massachusetts, US.

The Iron-Air battery is a ‘new class of cost-effective, multi-day energy storage system,’ that can feed electricity for 100 hours at 1/10th the cost of lithium-Ion, the ‘holy grail’ in terms of renewable energy technology.

It is made using iron, one of the most common elements on Earth, and works by breathing in oxygen, converting iron to rust, and turning rust back to iron.

As it takes in the oxygen and converts the iron back and forth it is charging and discharging the battery, a process that keeps the energy stored for a longer period.

The batteries are too heavy for use in electric cars, according to the firm, who say they are designed to meet the challenge of keeping a constant power supply.

If development continues at pace, Form Energy hope the first batteries will be working to supply the grid by 2025. 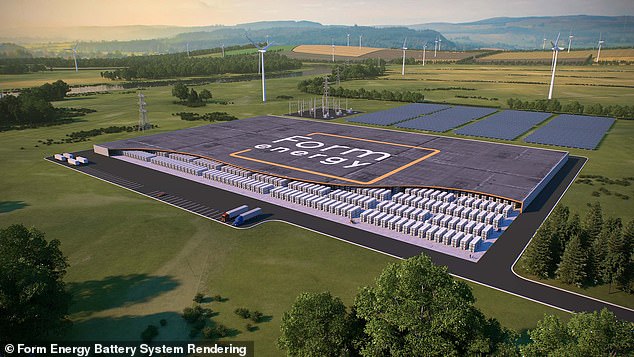 Form Energy plan to stack thousands of their ‘iron-air’ batteries together in vast warehouses, as shown in this rendering produced by the company 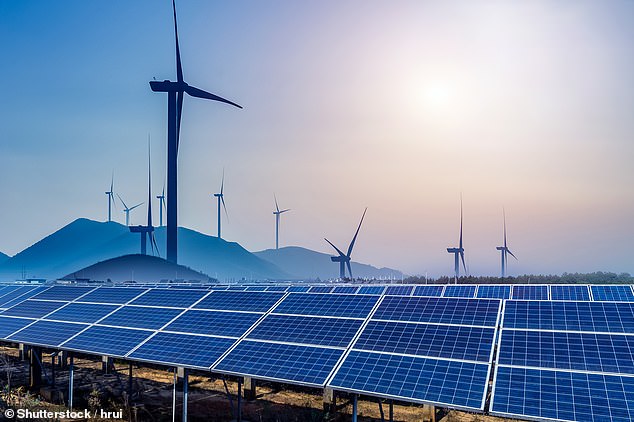 The idea is that when renewable energy systems, such as wind farms and solar plants aren’t operating, the batteries can take over feeding the grid with previously stored electricity

IRON-AIR BATTERY: HOW IT WORKS

The basic principle of operation is reversible rusting, the firm says.

While discharging, the battery breathes in oxygen from the air and converts iron metal to rust.

While charging, the application of an electrical current converts the rust back to iron and the battery breathes out oxygen.

They take in power from renewable sources, storing that energy for up to 150 hours and discharging it to the grid when renewables are offline.

Each individual battery is about the size of a washing machine.

Each of these modules is filled with a water-based, non-flammable electrolyte, similar to the electrolyte used in AA batteries.

Inside of the liquid electrolyte are stacks of between 10 and 20 meter-scale cells, which include iron electrodes and air electrodes, the parts of the battery that enable the electrochemical reactions to store and discharge electricity.

These battery modules are grouped together in modular megawatt-scale power blocks, which comprise thousands of battery modules in an environmentally protected enclosure.

Depending on the system size, tens to hundreds of these power blocks will be connected to the electricity grid.

For scale, in its least dense version , a one megawatt system requires about an acre of land.

This will solve one of the most elusive problems facing renewable energy, that is how to cheaply store large amounts of electricity and supply it to power grids when the sun isn’t shining for solar panels or wind isn’t blowing for turbines.

Solar and wind resources are the lowest marginal cost sources of electricity in most of the world, but they don’t provide a constant supply like fossil fuel power plants.

The electric grid now faces a challenge in how to manage this variability in supply without sacrificing energy reliability or affordability.

Form Energy claim their new battery system is the solution to this growing problem.

Mateo Jaramillo, CEO and Co-founder of Form Energy, said they conducted a broad review of all available technologies and ended up reinvented the iron-air battery.

This was done to ‘optimise it for multi-day energy storage for the electric grid.’

The firm says the battery they are developing will allow countries to fully retire thermal assets like coal and natural gas power plants.

‘With this technology, we are tackling the biggest barrier to deep decarbonization: making renewable energy available when and where it’s needed, even during multiple days of extreme weather or grid outages,’ said Jaramillo.

It will also be cheaper, the firm said. A lithium-iron battery cell uses nickel, cobalt, lithium and manganese minerals that cost up to $80 per kilowatt-hour of storage.

Using iron, Form hope to get that to less than $6 per kw/hour in terms of mineral costs for each cell, and packing them into a full battery system will still keep the cost to less than $20 per kilowatt hour of energy storage.

This is the price point that experts say renewables will finally be able to replace traditional fossil-fuel power plants.

Iron, chemical element Fe and atomic number 26, is a metal that, by mass, is hte most common element on Earth.

It forms most of the outer and inner core and is the fourth most common element in the crust.

As a metal it is rare in the crust, limited to meteorite deposits, but iron ore is very common.

With the use of kilns and furnaces iron metal can be extracted from iron ore at temperatures greater than 2,730 degrees Fahrenheit.

This is the transition from the Bronze Age and on to the Iron Age, although it didn’t happen until 1200 BCE in some areas of the planet.

Form Energy is working with ArcelorMittal on the development of iron materials which ArcelorMittal would non-exclusively supply for Form’s battery systems.

The firm plans to source the iron domestically in the US, and then build batteries near where they will be sited, including within the American Iron Range in Minnesota for utility firm Great River Energy.

Greg Ludkovsky, Global Head of Research and Development at ArcelorMittal, who will supply the iron, said, Form Energy was leading the development of long-duration, grid-scale battery storage solutions.

‘The multi-day energy storage technology they have developed holds exciting potential to overcome the issue of intermittent supply of renewable energy,’ he said.

The firm was founded by lithium-battery pioneer Yet-Ming Chiang, a professor at MIT, and Jaramillo, who studied economics before moving into battery technology, including a seven year spell at Tesla.

‘The founding team has 100 years of battery experience,’ Chiang told the Wall Street Journal. ‘We’re the alumni of a generation of failed battery companies who all came back for more.’

In early 2018 the first small scale tests of the new battery technology began and in 2020 they were able to purchase the patents of an Arizona-based battery company. 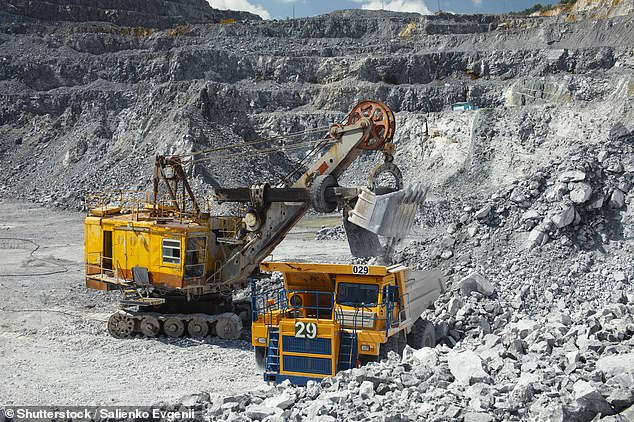 The technology makes use of iron, extracted from iron ore, by rusting, reversing the rusting and slowly dispersing stored energy over days

This gave them a technology that was impermeable to water but was able to breathe oxygen, a competent essential for their battery.

‘Having this piece nailed down allowed us to hit the accelerator,’ said Jaramillo.

The final design will see 20 individual 3ft by 3ft cells will be grouped in a battery and thousands of batteries will be strung together within a warehouse.

Each warehouse will then store a weeks worth of electricity, taking days to fully charge but discharging over as much as 150 hours.

They will be charged by renewable energy plants such as wind and solar while operational, to create a 150 hour buffer when they aren’t producing power, thus ensuring a continuous supply of electricity to the grid.

WHY DO SCIENTISTS WANT TO MINE ASTEROIDS?

Several start-ups have begun to explore the idea of mining near-Earth asteroids for precious resources.

The celestial objects are made of carbon, silicon or metal, but it is metallic asteroids that mining companies are most interested in.

These rogue blocks of minerals are teeming with precious metals, including pricey platinum, which could be worth quadrillions on Earth.

Nickel, iron and gold are also found in abundance within metallic asteroids.

Nasa estimates the total value of resources locked in space rocks is £522 quintillion – equivalent to £75 billion ($100 billion) for each person on Earth.

A company could send a small space probe to intersect with asteroids as they pass near Earth, and mine them for these resources.

Experts have warned that doing so may destroy commodity prices and cause the world’s economy to collapse.