Inside Ocado’s incredible London warehouse where fleet of 3,000 robots zip around a grid ‘like pieces on a chessboard’ to fill 50-item grocery orders in just FIVE MINUTES

They travel along a grid inside the 563,000 square foot London warehouse and are controlled ‘like pieces on a chessboard’ by an AI air traffic controller.

As they move along the board, coming within a fraction of an inch of each other, they grab items and prepare them to be delivered to the customer in a process that can take just 15 minutes to process an order with 99 per cent accuracy, Ocado claims.

The British online supermarket is now as much a technology company as it is a grocer, licensing its automation system to retailers around the world.

Ocado’s chief of advanced technology, Alex Harvey, said the eventual goal is to become fully automated and have items ‘out the door without a single human touch.’

He told CNN the vision for the future is a warehouses that is run by robots that receive the groceries, put them away, and pick items for delivery to a customer. 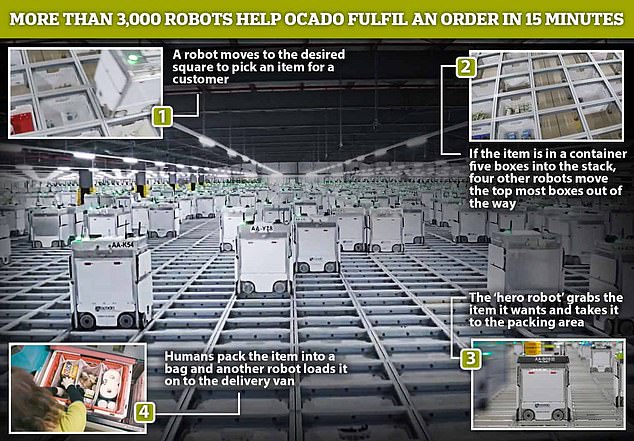 A fleet of 3,000 washing machine-like robots working inside Ocado’s London warehouse can fill a 50-item grocery order in just five minutes and any order in 15 minutes, the firm claims 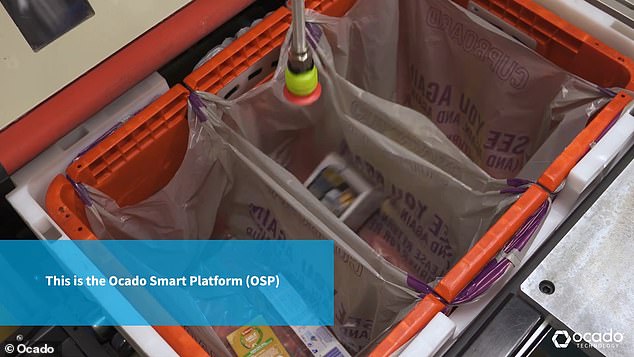 As they move along the board, coming within a fraction of an inch of each other, they grab items and prepare them to be delivered to the customer in a process that can take just 15 minutes to process an order with 99% accuracy, Ocardo claims 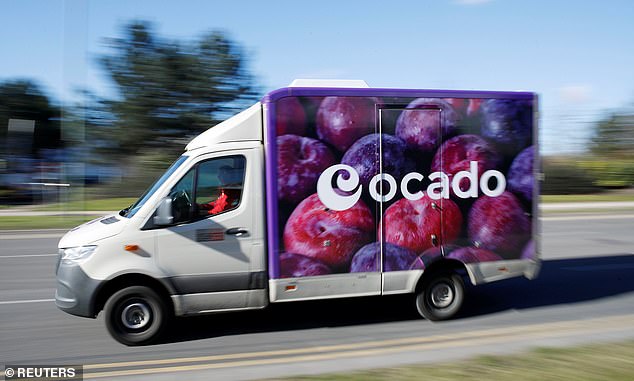 The British online supermarket is now as much a technology company as it is a grocer, licensing its automation system to retailers around the world

A publicly-traded automation company that produces software and  robotics for online retailers.

When founded it partnered with Waitrose for online shopping, shifting to Marks and Spencer in 2019.

The firm launched its Ocado Smart Platform in 2014, licensing its warehouse technology to a range of international partners.

This includes Kroger in the US, Coles in Australia and Casino in France.

Ocado’s south-east London warehouse includes some of its most advanced automation technology, based around its ‘Ocado Smart Platform’ (OSP).

However, the firm has warehouses throughout the UK using similar automated processes, from large scale mammoth facilities, to what they call ‘micro-fulfilment centres’ for more local delivery.

Recently Ocado has started partnering with large grocery retailers around the world, including Kroger in the US, Coles in Australia and Casino in France to offer a similar service to the one they operate with Marks and Spencer in the UK.

Using a combination of artificial intelligence and pre-programmed routines, the robots move at 13ft per second, avoiding collision through a complex dance.

Each square of the grid that make up the warehouse floor sits atop a stack of up to 21 containers, filled with some of the tens of thousands of products sold by the retailer.

An order is received by the warehouse, triggering the bots into action, following the dance pre-programmed by the controllers and overseen by the AI.

The bot heads towards the container it is looking for, passing a fraction of an inch from another bot as they all move across the grid.

Harvey told CNN the robots are ‘playing chicken’, putting them on a collision course and diverting them at the last possible moment.

Each of the 3,000 robots has a grabbing mechanism that can be used to pick items out of a contain, with each able to work with single container at a time.

This means that if a product they want is five containers down it takes five bots to grab it. Four bots hold up the unneeded containers while a ‘hero’ bot grabs the required product needed to fulfil an order. 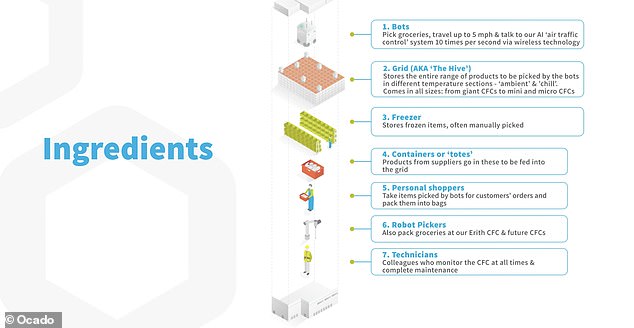 The structure of the warehouse is primarily automated, from bots controlled by an AI, operating with a ‘Hive’ like grid, to human packers placing groceries in bags 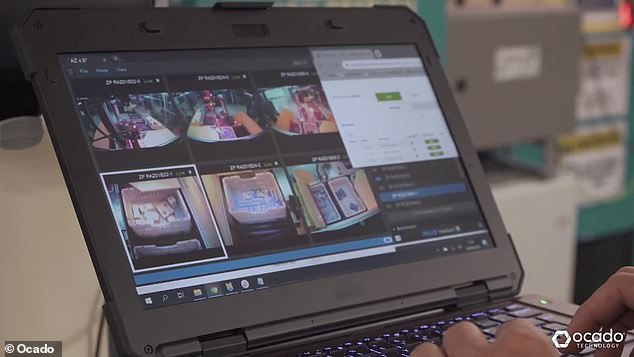 There are still humans involved to oversee the deliver, but the firm say their goal is a fully automated warehouse in the future

Once a bot has gathered all the requested items it is moved, by different bots, on to a van for delivery to the customer.

Ocado launched 21 years ago and at first it would take over three hours to pick items using a series of convey belts, that is now down to 15 minutes thanks to greater automation, explained Harvey.

The OSP system was first launched in 2014 and is 99% accurate in terms of the items it picks, which helps to minimise waste, according to Simon Mayhew, an independent market researcher from IGD. 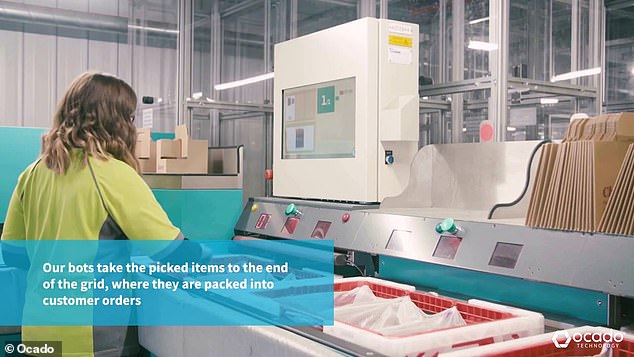 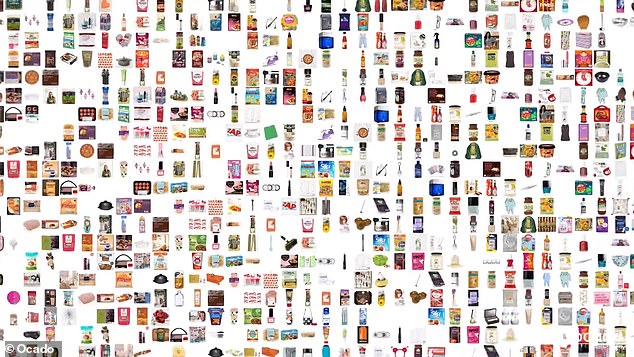 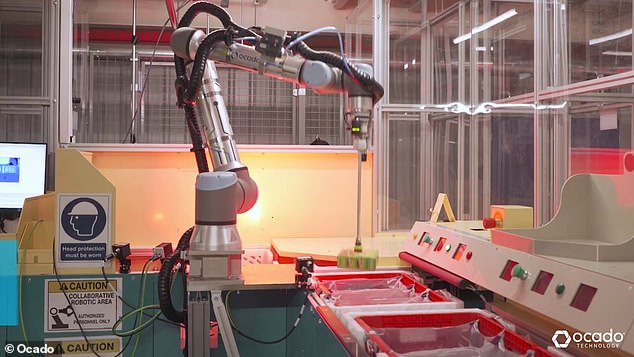 He told CNN that most retailers have about a 97 per cent order accuracy rate and one per cent makes a huge difference in terms of shopper experience.

Harvey explained that with labour costs one of the main driving factors in the price of groceries, moving to have repetitive tasks done by robots can keep costs down.

The company is looking to remove the human element completely, making the entire fulfilment process automated.

Ocado spent $300 million buying other firms that specialise in robotic arms and grabbing technology, in a bid to replace human packers at their warehouses.

HOW IT WORKS: OCADO SMART PLATFORM

The Ocado Smart Platform allows for items to be gathered more quickly by robots moving at 13ft per second in an almost completely automated process.

Ocado says its system can pack and put out for delivery a 50 item order in about 15 minutes, with bots moving at 13ft per second and moving within a fraction of an inch of each other.

Dinosaur discovery: 82 million-year-old horned beast is the earliest dino of its kind