Though it is well-known for its many arms, the octopus does not seem to know where those eight appendages are most of the time.

“In the octopus, you have no bones and no joints, and every point in its arm can go to every direction that you can think about,” said Nir Nesher, a senior lecturer in marine sciences at the Ruppin Academic Center in Israel. “So even one arm, it’s something like endless degrees of freedom.”

So how does the octopus keep all those wiggly, sucker-covered limbs out of trouble? According to a study published this month in The Journal of Experimental Biology by Dr. Nesher and his colleagues, the octopus’s arms can sense and respond to light — even when the octopus cannot see it with the eyes on its head. This light-sensing ability may help the cephalopods keep their arms concealed from other animals that could mistake the tip of an arm for a marine worm or some other kind of meal.

Itamar Katz, one of the study’s authors, first noticed the light-detecting powers while studying a different phenomenon: how light causes the octopus’s skin to change color. With Dr. Nesher and Tal Shomrat, another author, Mr. Katz saw that shining light on an arm caused the octopus to withdraw it, even when the creature was sleeping.

Further experiments showed that the arms would avoid the light in situations when the octopus could not see it with its eyes. Even when the octopuses reached an arm out of a small opening on an opaque, covered aquarium for food, the arm would quickly retract when light was shined on it 84 percent of the time. 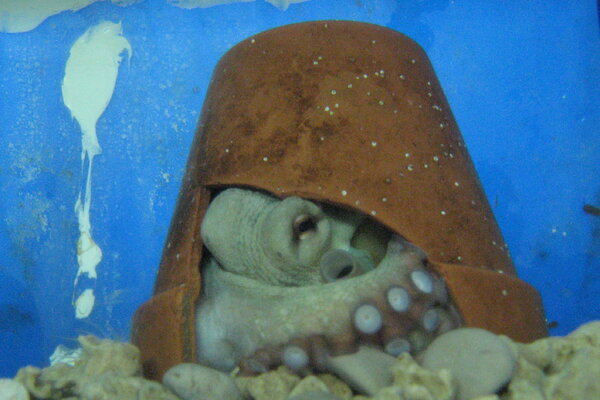 The arm light-response behavior also adapted to changing conditions. When the octopuses were kept in the dark for a week or a month, the reflex of withdrawing from light became faster but also required brighter light to activate it.

This ability to sense and adapt to light most likely uses a lot of energy, which suggests the behavior is important for the octopus’s survival.

“We speculate this reflex is for protecting the arms and keeping them folded so that no crabs or fish will bite it when they think it’s kind of a worm,” Dr. Shomrat said.

However, it is still a mystery how an octopus’s arms can detect light, let alone respond to it. There is evidence that there are light-sensitive receptors in the skin, but no direct proof yet that they are responsible for the behavior, Mr. Katz said.

Surgical experiments, conducted under anesthesia and with care to minimize suffering, did provide some clues. The arm stopped retracting from the light when it was separated from the body or when the octopus was anesthetized. Though the behavioral response did not require sight, it still required the brain to be intact. Stranger still, the reflex also seemed dependent on something in the arm’s muscle — when only the skin was cut, the reflex persisted, but not when the muscle underneath was also severed.

Uncovering how exactly an octopus arm avoids the light is the next step in understanding this unexpected behavior.

“But it’s always like this in the octopus,” Dr. Nesher said. “You see very weird or very interesting phenomena, and then you say, ‘Oh, nobody looked at this before.’”