Oldest human DNA from Britain may have been from a cannibal

Britain’s dual ancestry: Analysis of two people who lived in Somerset and Wales over 13,000 years ago indicates two populations migrated to the UK at the end of the last Ice Age – including one that practiced CANNIBALISM

The oldest known human DNA from Britain to date represents two distinct groups – one of which may have practiced cannibalism, a new study says.

Researchers in London analysed the DNA of two late British individuals who lived towards the end of the Old Stone Age.

One of the individuals was found in Gough’s Cave in Somerset, while the other was recovered from Kendrick’s Cave in North Wales.

Results indicate each belonged to a distinct group that migrated to Britain at the end of the last Ice Age, both with very different dietary practices.

The female from Gough’s Cave was part of a group that likely practiced cannibalism, while the second group’s diet was predominantly marine and freshwater foods. 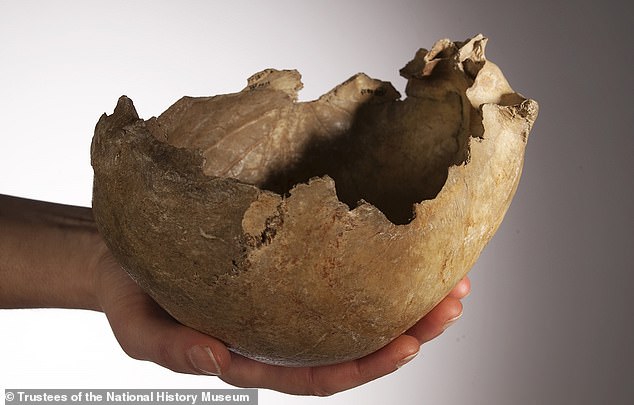 A new study suggests the presence of two distinct groups in Britain at the end of the last Ice Age, including one that might have practiced cannibalism. This group, based in Gough’s Cave in Somerset, may have used their victim’s skulls to drink out of after eating their flesh. Pictured are these ‘skull cups’ now being held by the National History Museum 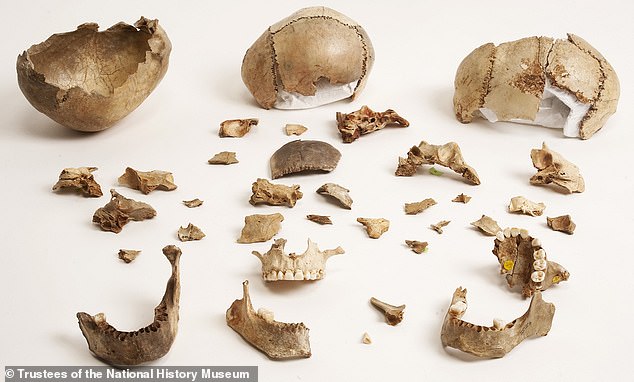 Skull bowls and other fragments  from Gough’s Cave. The Gough’s Cave individual analysed for this study was female and lived around 14,900 years ago 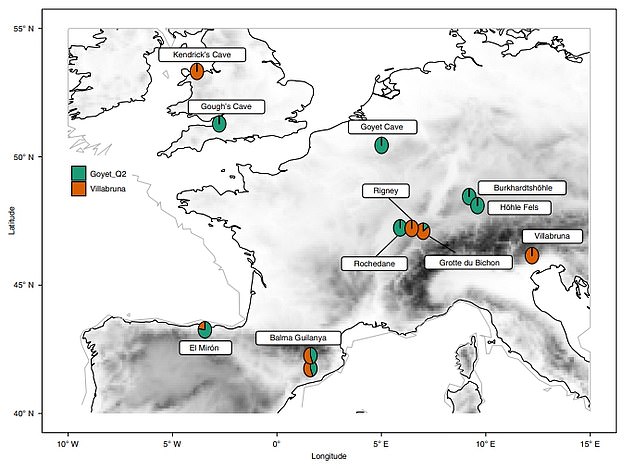 – Part of a group that likely practiced cannibalism

The new study was led by experts at the Natural History Museum, University College London (UCL), and the Francis Crick Institute, and published in Nature Ecology & Evolution.

‘We really wanted to find out more about who these early populations in Britain might have been,’ said study author Dr Selina Brace at the Natural History Museum.

‘We knew from our previous work, including the study of Cheddar Man, that western hunter-gatherers were in Britain by around 10,500 years before present.

‘But we didn’t know when they first arrived in Britain, and whether this was the only population that was present.’

DNA from the Gough’s Cave individual indicates that her ancestors were part of the initial migration into northwest Europe.

Meanwhile, the individual from Kendrick’s Cave is from a later period, around 13,500 years ago, and his ancestry is from a group known as ‘western hunter-gatherers’, who have their ancestral origins in the Near East.

‘Chemical analyses of the bones showed that the individuals from Kendrick’s Cave ate a lot of marine and freshwater foods, including large marine mammals,’ said study author Dr Rhiannon Stevens at UCL.

‘Humans at Gough’s Cave, however, showed no evidence of eating marine and freshwater foods, and primarily ate terrestrial herbivores such as red deer, bovids (such as wild cattle called aurochs) and horses.’ 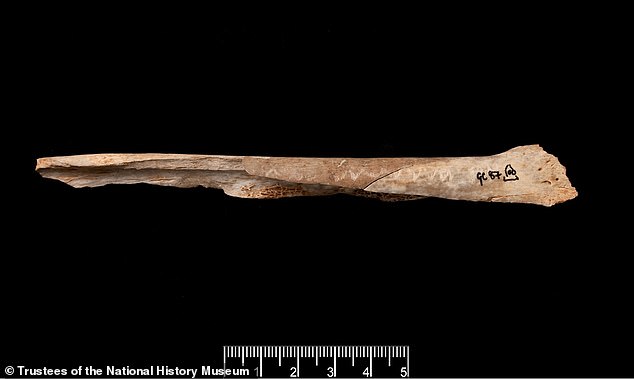 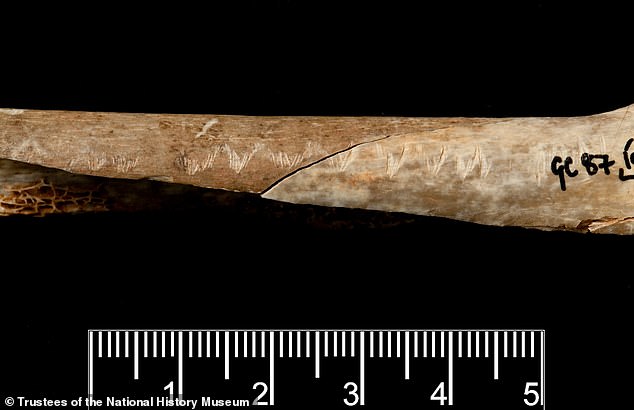 Close-up of the Gough’s Cave bone, which once belonged to a female individual that lived around 15,000 years ago

There were no animal bones showing evidence of being eaten by humans at Kendrick’s Cave, indicating that the cave was used as a burial site by its occupiers.

In contrast, animal and human bones found in Gough’s Cave showed significant human modification, including human skulls that had been modified into ‘skull-cups’ and interpreted as evidence for ritualistic cannibalism. 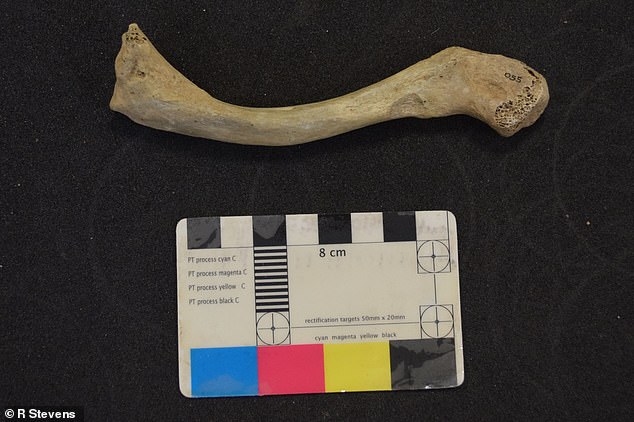 Human remains from Kendrick’s Cave (North Wales), which date to around 13,600 years ago 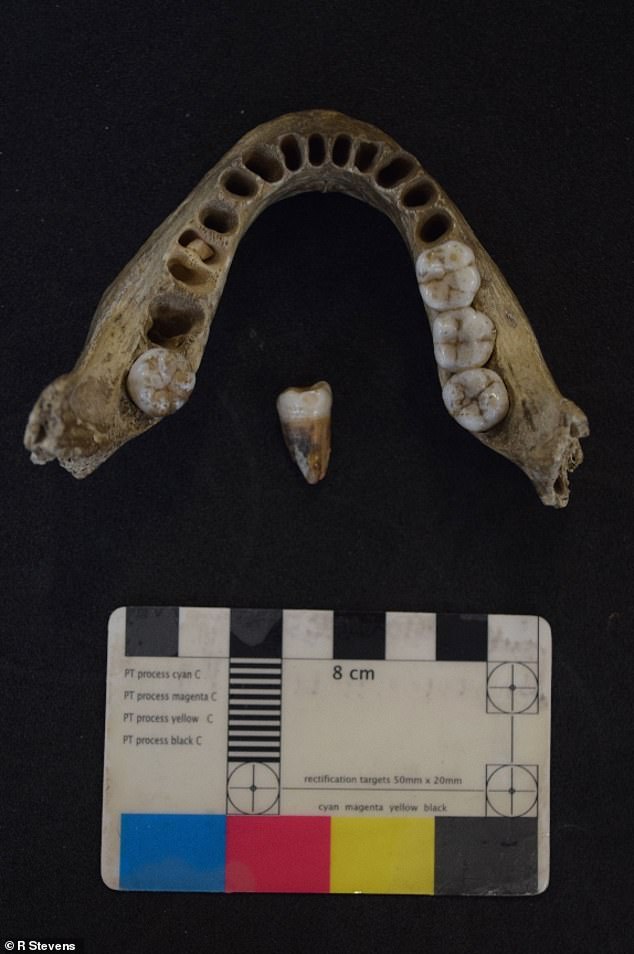 Human jaw from Kendrick’s Cave dated to 13,600 years ago. The oldest known human DNA from Britain to date is presented in a paper published in Nature Ecology & Evolution

Around 20,000 years ago, a major climatic event called the Last Glacial Maximum caused a drop in global temperature.

During the Last Glacial Maximum, continental ice sheets reached their maximum total mass, while land near the ice sheets that escaped glaciation was cold and covered with tundra vegetation.

Because of the temperature drop, a group of hunter-gatherers in the west experienced an extreme reduction in its population, where some grew close to extinction.

The individuals were part of populations that entered Britain several thousands of years after the Last Glacial Maximum, a major climatic event where temperatures plummeted around 20,000 years ago.

Although humans lived in Britain prior to the Last Glacial Maximum, occupation was sparse, as extensive ice sheets meant that much of the island was uninhabitable until the ice began to melt approximately 19,000 years ago.

Around 17,000 years ago, as the climate warmed and the glaciers continued to melt, humans began to move back into northern Europe.

‘The period we were interested in, from 20-10,000 years ago, is part of the Palaeolithic – the Old Stone Age,’ said study author Dr Sophy Charlton at the University of York.

‘This is an important time period for the environment in Britain, as there would have been significant climate warming, increases in the amount of forest, and changes in the type of animals available to hunt.

‘There are very few human remains of this age in Britain; perhaps around a dozen individuals from six sites.’

However, the individual from Kendrick’s Cave shows no evidence of having ancestry related to the older Gough’s Cave individual. 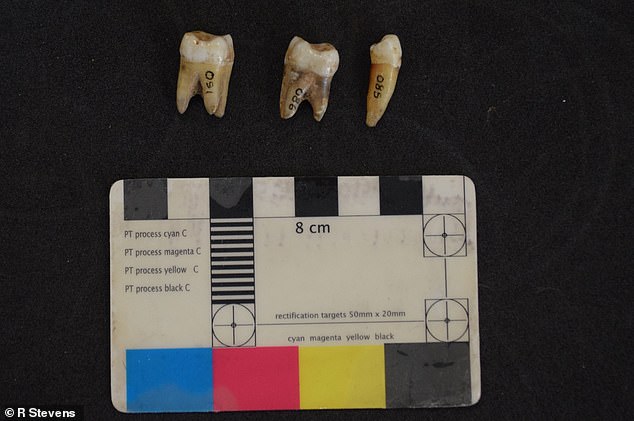 Human teeth from Kendrick’s Cave (North Wales) which date to around 13,600 years ago.

This indicates that there were two genetically distinct groups in Britain within approximately 1,000 years of each other, mirroring so-called ‘dual ancestry’ patterns seen elsewhere in Europe during the late Pleistocene period, experts say.

‘Finding the two ancestries so close in time in Britain, only a millennium or so apart, is adding to the emerging picture of Palaeolithic Europe, which is one of a changing and dynamic population,’ said study author Dr Mateja Hajdinjak at the Francis Crick Institute.

Writing in an accompanying News & Views piece, Chantel Conneller, a pre-history researcher at Newcastle University who was not involved with the study, said it ‘provides new evidence for the genetic makeup of Late Upper Palaeolithic people in Britain’.

However, she warned of the ‘inevitable simplification’ that comes from organizing and interpreting DNA data on a large scale.

‘Palaeolithic archaeology with its relatively imprecise chronologies and small datasets is particularly vulnerable to claims of synchronicity for population events and material culture changes that may be hundreds or even thousands of years apart,’ she writes.

BRITAIN DURING THE LAST ICE AGE

The last Glacial Maximum was around 22,000 years ago when much of Europe was covered in ice.

During the ice age, which ended about 11,500 years ago, ice covered about 30 per cent of the land in the world.

In Britain, glacial ice and waterflows spread as far south as the Bristol Channel.

Average temperatures were 5°C (8°F) colder than they are today, allowing a one-kilometre-thick sheet of ice to cover much of the country.

The temperature remained below 0°C all year round in northern regions, particularly Scotland, allowing the sheet to remain on the land all year.

Ice connected Britain with Scandinavia, allowing a host of large wildlife to roam free between the UK and mainland Europe.

During this period Britain would have seen the likes of woolly mammoths, giant deer and wolves roaming its icy planes.

Large glacial lakes covered Manchester, Doncaster, Newcastle and Peterborough and much of the country was uninhabitable for humans.

Corridors of fast flowing ice, known as ice streams, flowed toward the east over Edinburgh and toward the west of Glasgow.

All of Ireland was covered in ice, which was flowing through the Irish sea where it met Welsh ice and then flowed south toward the Isles of Scilly.

Much of Scotland, Wales, the midlands and northern England was covered in perpetual ice.

Cambridge, which was covered by a huge glacial lake, was the most southern region to be heavily affected by the icy climate.

Over time the ice and its hefty waterflows carved out the land of Britain, forming geological scars that can still be seen today.

These include glacial ridges sculpted by moving ice and winding flows of rock that travelled for miles across the country.