Parasitic chicks born in other birds’ nests are able to PULVERISE their ‘foster’ siblings by gaining super strength while exercising in their eggs, study finds

Parasitic chicks in other birds’ nests ‘exercise’ when they’re still in the egg, as part of their attempts to murder their ‘foster’ siblings, a new study shows.

Researchers in London found that the chicks of parasitic bird species move more in the egg than other species, to build up the strength to overcome other rival chicks once they’ve been born.

Certain species of bird, most famously the common cuckoo, trick other bird species into raising their chicks for them – a behaviour termed ‘brood parasitism’.

When the nest is unattended for a brief moment, the parasitic mother drops her egg into the host’s nest and quickly flies off before they’re seen.

The unsuspecting adult ‘host’ ends up raising the parasite’s chicks for them, even when the chick kills its foster sibling rivals. 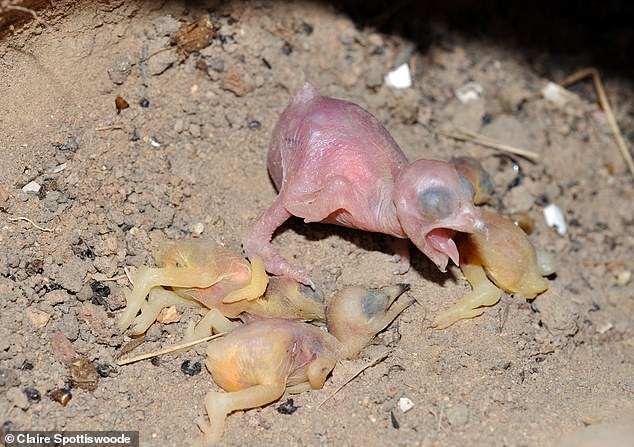 Some species of birds – ‘brood parasites’ – lay their eggs into the nests of other species. These other species – the ‘hosts’ – end up raising the foreign chicks at the expense of their own chicks. When the brood parasite chicks hatch, they can kill the chicks of the host. Pictured, a greater honeyguide attacking the much smaller chicks of the host species, the little bee-eater. This picture was taken by Claire Spottiswoode, an expert in brood parasitism at the University of Cambridge and co-author of this new study, on location in Africa

Some species of birds – the ‘brood parasites’ – lay their eggs into the nests of other species.

These other species – the ‘hosts’ – end up raising the foreign chicks at the expense of their own chicks.

This is because parasitic chicks have evolved methods to overcome their ‘foster siblings’, such as sharp beaks to kill them (in the case of the greater honeyguide) or super strength to push them out the nest (the common cuckoo). This is done either before or after the host chicks have hatched.

Some parasitic bird species don’t kill their foster siblings, but compete with them for more attention from the mother – to get fed more food.

Some brood parasite chicks, including the cuckoo, push the host’s eggs out of the nest one by one, in an impressive display of physical exertion.

Others have evolved a dangerously sharp point on the end of their little beak, which they use to pulverise the eggs of their host (in the case of the greater honeyguide and lesser honeyguide).

For their study, McClelland and colleagues studied movements in 437 eggs from 14 species of birds – hosts, parasites and other bird species as a comparison – from three continents (Europe, America and Africa).

The academics measured embryo movement (when the birds were still in the egg, unborn) in multiple brood-parasitic and non-parasitic bird species.

They did this by beaming infrared light through the egg and recording when that beam was disrupted – an indicator of movement.

Overall, the experts found more frequent embryo movement in the brood parasite species than the host birds and other non-parasitic birds.

‘We found that brood parasites exhibited significantly increased muscular movement during incubation compared to non-parasites,’ they say in their research paper.

‘This suggests that increased embryo movement may facilitate the development of the stronger musculoskeletal system required for the demanding tasks undertaken by young brood parasites.’

(Note: Corresponding numbers refer to which parasitic species lay their eggs in which hosts. So, the Common cuckoo lays its eggs in the nest of the great reed warbler)

Researchers point out that multiple brood parasite species have evolved shorter incubation periods, to make sure they hatch before the host chicks, and stronger eggshells.

Greater strength and stamina are required to hatch from these stronger structures, meaning they’re well prepared for the first task of their time on Earth – murdering rival chicks.

The new study, published in Proceedings of the Royal Society B: Biological Sciences, suggests embryo movement may be overlooked in the evolution of bird behaviours, including brood parasitism.

The common cuckoo provides one of most amazing and famous examples of brood parasitism in the UK.

Nick Davies, a professor of behavioural ecology at the University of Cambridge, has previously described the species as ‘nature’s most notorious cheat’. 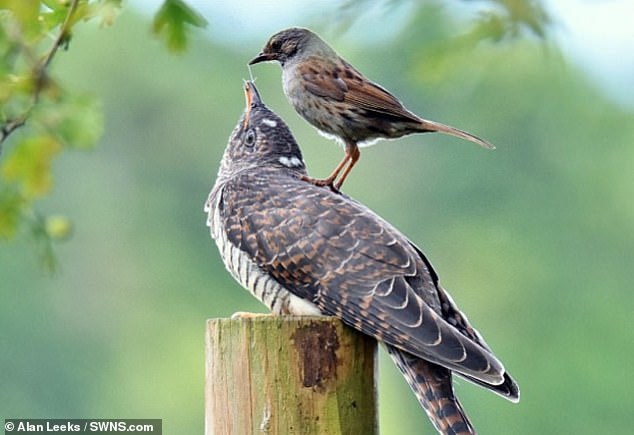 A photograph of an adult bird ‘host’, a dunnock, or hedge sparrow (top), feeding an enormous cuckoo chick that’s more than twice its size. The cuckoo chick (bottom) would have been placed into the adult dunnock’s nest by its cuckoo mother only weeks earlier. When it’s placed craftily in the host’s nest, a young cuckoo hatches after only 12 days and quickly pushes the hosts’ eggs or babies out of the nest. After 19 days it leaves the nest, but the hosts continue to feed it for two more weeks, by which time it has grown much bigger than them 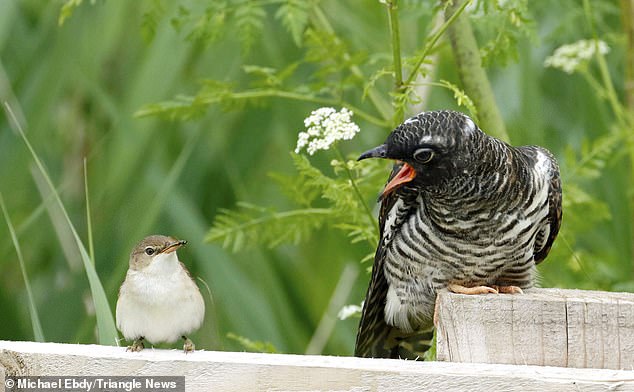 The bizarre scene is the result of the cuckoo’s sneaky habit of laying eggs in the nests of other species and leaving the unwitting birds to raise their chicks. A reed warbler (left) and a very large and deceitful cuckoo chick (right)

Professor Davies is the author of several books on the cuckoo and brood parasitism in birds, including Cuckoo: Cheating by Nature, published in 2016.

Perfectly illustrating his description, images emerged in 2018 of a dunnock, or hedge sparrow, that had been duped into feeding an enormous cuckoo chick.

‘Every summer, thousands of small birds will have their eggs and chicks tossed overboard by young cuckoos,’ Professor Davies wrote for the Daily Mail.

‘The host parents are then tricked into spending their summer raising a cuckoo instead of a brood of their own chicks.’

More photos of a small reed warbler parent feeding a huge cuckoo chick that emerged last year are both tragic and perversely comic.

Professor Claire Spottiswoode, co-author of this new study and one of Professor Davis’ colleagues at the University of Cambridge, has snapped some amazing photos of brood parasitism in action on location in Africa.

One photo, like something out of a horror film, shows a greater honeyguide chick attacking much smaller chicks of the host species, the little bee-eater.

Interestingly, bird ‘hosts’ that are victim to brood parastism every year have evolved various tactics to detect the parasite’s eggs and save their own eggs from being murdered. 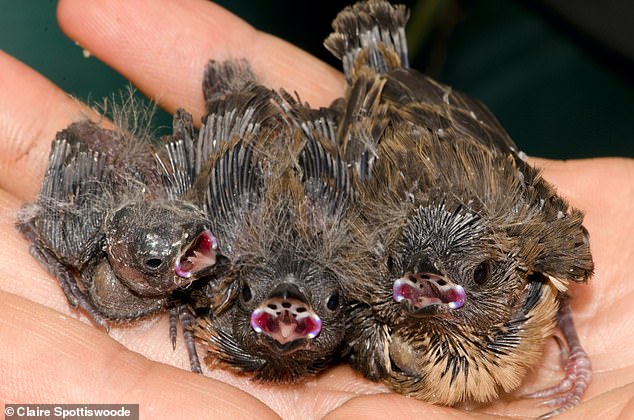 A larger ‘parasitic’ purple indigobird nestling (right) alongside its two jamesons firefinch host chicks – and rivals. Some species of birds discreetly place their eggs into the nests of other species so the mothers effectively raise their offspring for them. When hatched, some species, like the cuckoo, kill the rival birds – and the unsuspecting mother’s true offspring – by kicking them out of the nest and reap the benefits

Over the course of several decades, this has created what Professor Davis calls an ‘evolutionary arms race’ between the host and the parasite.

For example, African finch chicks (a parasite species) have evolved tiny details on the insides of their mouths to mimic those of their host species, the grassfinch, a study showed last year.

Hosts can detect the foreign eggs and eject or abandon them. They’ve also evolved the ability to make their own eggs more distinct, covered with unique patterns and colours, to help ensure they don’t confuse them with foreign eggs.

But over time, the parasite species evolves so their eggs better mimic the host – and so the ‘evolutionary arms race’ continues.

BROOD PARASITISM AND THE EUROPEAN CUCKOO 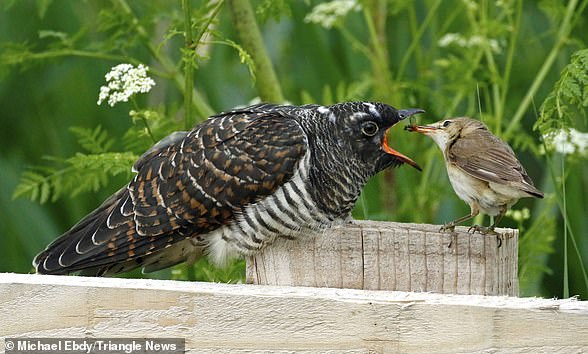 Some species of birds thrive not by carefully rearing their own young, but by pawning that task off on adults of other species.

The European Cuckoo, whose distinctive call is immortalised in the sound of the cuckoo clock, is the bird in which this habit has been most thoroughly studied.

Female European Cuckoos lay their eggs only in the nests of other species of birds.

A cuckoo egg usually closely mimics the eggs of the host (one of whose eggs is often removed by the cuckoo).

The host may recognise the intruding egg and abandon the nest, or it may incubate and hatch the cuckoo egg.

Shortly after hatching, the young European Cuckoo, using a scoop-like depression on its back, instinctively shoves over the edge of the nest any solid object that it contacts.

With the disappearance of their eggs and rightful young, the foster parents are free to devote all of their care to the young cuckoo.

Frequently this is an awesome task, since the cuckoo chick often grows much larger than the host adults long before it can care for itself.

The scene of a small foster parent working to keep up with the voracious appetite of an outsized young cuckoo has amazed bird watchers.

The eggs of each female very closely mimic those of the host selected (even though one host may have large, densely spotted eggs, and another may have smaller, unmarked pale blue eggs), and the mimetic patterns are genetically determined.

The different genetic kinds of females apparently mate at random with males.

How these gentes are maintained within the cuckoo populations is not fully understood.

Brood parasitism is found in about 1 percent of bird species, including members of such diverse groups as ducks, weavers, and cowbirds.

Brood parasitism is not restricted to females of one species laying eggs in the nests of other species.

Females of a wide variety of species sometimes lay eggs in the nests of other females of the same species.

Bird, chicks, in, Other, parasitic
You may also like: