Paris will use FLYING TAXIS during the 2024 Olympic Games

Paris will use FLYING TAXIS to shuttle sports fans across the city during the 2024 Olympic Games, officials claim

From The Jetsons to Harry Potter, flying taxis are a staple feature of many science fiction blockbusters.

But the futuristic vehicles are inching closer to becoming a reality, and could even be used to shuttle sports fans across Paris during the 2024 Olympic Games.

French officials have announced that Paris will begin testing electric air taxis at a test sight just outside Paris.

The ultimate goal is to create at least two flights paths to ease congestion during the summer games, according to the officials. 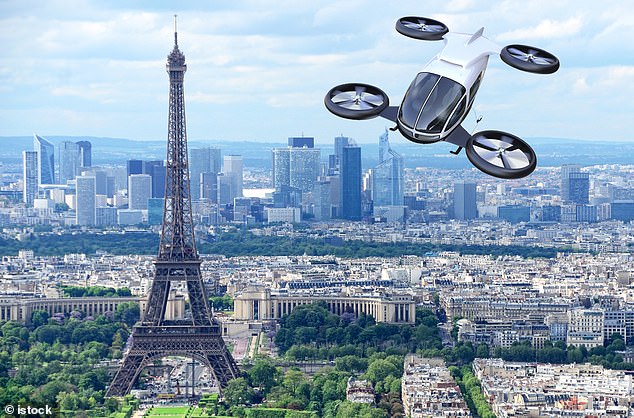 Overall, the aim is to have two routes available for sports fans during the 2024 Olympic Games:

The Pontoise test site is located at the Cormeilles-en-Vexin airfield and will see approximately 30 manufacturers carry out tests.

Augustin de Romanet, CEO of Aéroports de Paris, said: ‘Our Pontoise airfield brings together a unique ecosystem around new air mobility and the trial platform we are launching today is unprecedented in Europe.

‘It will function as a concrete experiment to explore the field of possibilities of a decarbonised and innovative aviation, and to develop the low altitude aviation market (below 300 metres), which has been largely unexplored until now.’

While details of the flying taxis themselves remain unclear, several large firms will be involved in the tests at the Pontoise airfield.

This includes Volocopter, Airbus, Vertical Aerospace and Ascendance, Lilium and Joby Aviation, although ‘other manufacturers’ could also be added in the coming months.

‘The trials will help model an eVTOL flight at the scale of the vehicle, the neighbourhood and the region, in order to anticipate and confirm vertiport installation plans in the Île-de-France region,’ explained Catherine Guillouard, CEO of RATP Group.

Overall, the aim is to have two routes available for sports fans during the 2024 Olympic Games.

The first is between the Paris-Issy-les-Moulineaux heliport and the Saint-Cyr airfield, while the second is between Paris-Charles de Gaulle and Le Bourget airports and Paris city, on a site to be determined. 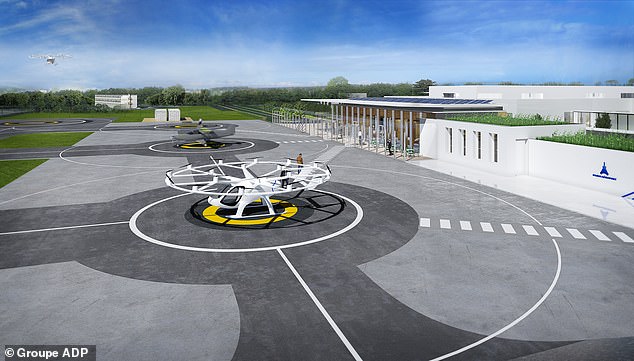 While details of the flying taxis themselves remain unclear, several large firms will be involved in the tests at the Pontoise airfield

Alexandra Dublanche, Vice-President of the Ile-de-France Region added: ‘With the upcoming 2024 Olympic Games, mastering these new technologies and uses in a densely populated area like Paris Region is not an option, it is a must.’

The news comes shortly after Hyundai revealed plans to develop autonomous flying taxis by 2028, with seating for up to five passengers.

To deliver this, the Seoul-based manufacturer announced that it had transformed its Urban Air Mobility Division into a new company, Supernal.

Supernal, which will be US-based, has said it will also be working to integrate the planned craft into existing transit networks and create necessary infrastructure.

Such might include so-called vertiports — transport hubs for flying taxis.

The firm also announced at that time a partnership with rideshare app Uber, who has forged links with several other companies to work on developing air taxis.

WHAT TYPE OF FLYING TAXIS COULD WE EXPECT TO SEE IN THE FUTURE?

Advances in electric motors, battery technology and autonomous software has triggered an explosion in the field of electric air taxis.

Kitty Hawk is believed to be developing a flying car and has already filed more than a dozen different aircraft registrations with the Federal Aviation Administration, or FAA.

Page, who co-founded Google with Sergey Brin back in 1998, has personally invested $100 million (£70 million) into the two companies, which have yet to publicly acknowledge or demonstrate their technology.

Secretive start-up Joby Aviation has come a step closer to making its flying taxi a reality.

The California-based company, which is building an all-electric flying taxi capable of vertical take-off, has received $100 million (£70 million) in funding from a group of investors led by Toyota and Intel.

The money will be used to develop the firm’s ‘megadrone’ which can reach speeds of 200mph (321kph) powered by lithium nickel cobalt manganese oxide batteries.

The Joby S2 prototype has 16 electric propellers, 12 of which are designed for vertical take-off and landing (VTOL), which means no runway is needed.

AirSpaceX unveiled its latest prototype, Mobi-One, at the North American International Auto Show in early 2018. Like its closest rivals, the electric aircraft is designed to carry two to four passengers and is capable of vertical take-off and landing

The aircraft takes off vertically, like a helicopter, before folding away 12 of its propellers so it can glide like a plane once it is airborne.

Airbus is also hard at work on a similar idea, with its latest Project Vahana prototype, branded Alpha One, successfully completing its maiden test flight in February 2018.

The self-piloted helicopter reached a height of 16 feet (five metres) before successfully returning to the ground. In total, the test flight lasted 53 seconds.

The footage reveals a sleek self-flying aircraft that seats one passenger under a canopy that retracts in similar way to a motorcycle helmet visor. 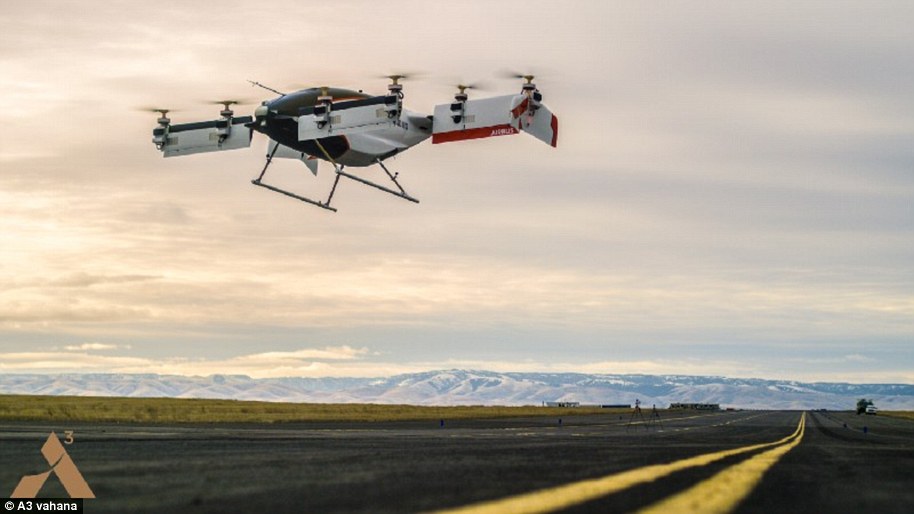 Like Joby Aviation, Project Vahana is designed to be all-electric and take-off and land vertically.

AirSpaceX is another company with ambitions to take commuters to the skies.

The Detroit-based start-up has promised to deploy 2,500 aircrafts in the 50 largest cities in the United States by 2026.

Like its closest rivals, the electric aircraft is designed to carry two to four passengers and is capable of vertical take-off and landing.

AirSpaceX has even included broadband connectivity for high speed internet access so you can check your Facebook News Feed as you fly to work.

Aside from passenger and cargo services, AirSpaceX says the craft can also be used for medical and casualty evacuation, as well as tactical Intelligence, Surveillance, and Reconnaissance (ISR).

Even Uber is working on making its ride-hailing service airborne.

‘I think it’s going to happen within the next 10 years,’ he said.

Life on Mars? Organic carbon found on Red Planet’s surface may have come from bugs