Men who drink alcohol while trying for a baby are 35% more likely to father children with birth defects including cleft lips, study warns

Men who drink alcohol while trying for a baby — even just once a week — are more than a third more likely to father children with birth defects, a study has warned.

Researchers analysed the pre-conception alcohol habits and pregnancy outcomes of more than 500,000 couples across mainland China.

Of the mothers in these couples, only three per cent drank in the six months before conception, allowing the team a unique look at the impact of paternal drinking.

In Western countries, it is estimated up to 30 per cent of women drink either before or during pregnancy, making it harder to evaluate the effect of fathers who drink.

Based on their data, the team found that not only does paternal drinking increase the risk of birth defects generally, but it also increases the risk of clefts by 55 per cent.

Cleft lips and palates occur when parts of the face do not fuse together properly during foetal development, and occur in 1-in-700 births in the UK.

The findings add to the increasing evidence that the lifestyles of fathers — not only mothers — have the potential to impair the growth of foetuses in the womb. 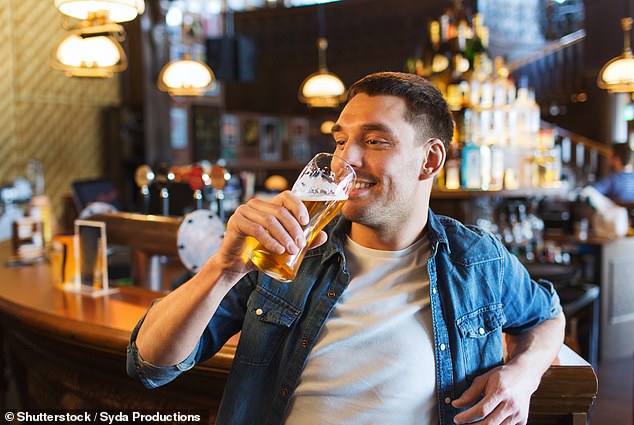 Men who drink alcohol while trying for a baby — even just once a week — are more than a third more likely to father children with birth defects, a study has warned (stock image)

OTHER RISKS OF PATERNAL DRINKING

Birth defects are not the only risk of paternal drinking.

A previous study of 340,000 births in China found that children born of fathers who drink around the time of conception were 44 per cent more likely to develop heart disease.

And if mothers enjoyed a drink before getting pregnant, the risk rose by other 16 per cent, the team found.

‘It’s widely recommended for women to quit consuming alcohol before and during pregnancy,’ said paper author and gynaecologist Xiaotian Li of the Fudan University in Shanghai, eastern China.

However, he noted, the safety of fathers’ drinking which trying to conceive has barely been considered — until now.

‘Our finding suggests future fathers should be encouraged to modify their alcohol intake before conceiving to reduce foetal risk,’ Professor Li added.

In their study, Professor Li and colleagues analysed data on the pregnancy outcomes of 529,090 couples living in China and their alcohol consumption in the six months prior to conception.

Overall, 609 children with birth defects were reported by the parents in the six weeks following delivery.

The researchers’ analysis revealed that once other factors were accounted for, children were 35 per cent more likely to have a birth defect if their father had drank once a week of more in the six months prior to conception.

Furthermore, the team found that the odds of cleft lips and palates specifically was increased by 55 per cent among the children of fathers who drank while trying for a baby with their partner.

‘This study aimed to investigate the association between paternal drinking before pregnancy and birth defects to provide supportive evidence for alcohol cessation in preconception health care,’ said Professor Li.

The full findings of the study were published in the journal JAMA Pediatrics.

A cleft is a gap or split in the upper lip and/or roof of the mouth (palate). It is present from birth.

The gap is there because parts of the baby’s face did not join together properly during development in the womb.

A cleft lip and palate is the most common facial birth defect in the UK, affecting around 1 in every 700 babies.

What does a cleft lip and palate look like?

Babies can be born with a cleft lip, a cleft palate, or both.

A cleft lip may just affect one side of the lip or there may be 2 clefts.

It can range from a small notch to a wide gap that reaches the nose.

A cleft palate may just be an opening at the back of the mouth, or it may be a split in the palate that runs all the way to the front of the mouth.

Sometimes it can be hidden by the lining of the roof of the mouth.

A cleft lip and cleft palate can cause a number of issues, particularly in the first few months after birth, before surgery is done.

Most of these problems will improve after surgery and with treatments such as speech and language therapy.

Causes of cleft lip and palate

A cleft lip or palate happens when the structures that form the upper lip or palate fail to join together when a baby is developing in the womb.

The exact reason why this happens to some babies is often unclear. It’s very unlikely to have been caused by anything you did or did not do during pregnancy.

In a few cases, cleft lip and palate is associated with:

In some cases, a cleft lip or palate can occur as part of a condition that causes a wider range of birth defects, such as 22q11 deletion syndrome (sometimes called DiGeorge or velocardiofacial syndrome) and Pierre Robin sequence.

A cleft lip is usually picked up during the mid-pregnancy anomaly scan done when you’re between 18 and 21 weeks pregnant. Not all cleft lips will be obvious on this scan and it’s very difficult to detect a cleft palate on an ultrasound scan.

If a cleft lip or palate does not show up on the scan, it’s usually diagnosed immediately after birth or during the newborn physical examination done within 72 hours of birth.

When a cleft lip or palate is diagnosed, you’ll be referred to a specialist NHS cleft team who will explain your child’s condition, discuss the treatments they need and answer any questions you have.

You may also find it useful to contact a support group, such as the Cleft Lip and Palate Association, who can offer advice and put you in touch with parents in a similar situation.

Treatments for cleft lip and palate

Your child will usually have a long-term care plan that outlines the treatments and assessments they’ll need as they grow up.

The main treatments are:

Outlook for cleft lip and palate

The majority of children treated for cleft lip or palate grow up to have completely normal lives.

Most affected children will not have any other serious medical problems and treatment can usually improve the appearance of the face and problems with feeding and speech.

Surgery to repair a cleft lip may leave a small pink scar above the lips. This will fade over time and become less noticeable as your child gets older.

Some adults who’ve had a cleft lip or palate repair may be self-conscious or unhappy about their appearance. Your GP may refer you back to an NHS cleft centre for further treatment and support if there are any ongoing issues.

Will a cleft lip and palate happen again?

Most cases of cleft lip or palate are a one-off and it’s unlikely you’ll have another child with the condition.

The risk of having a child with a cleft lip or palate is slightly increased if you’ve had a child with the condition before, but the chances of this happening are thought to be around 2 to 8%.

If either you or your partner were born with a cleft lip or palate, your chance of having a baby with a cleft is also around 2 to 8%.

The chances of another child being born with a cleft or of a parent passing the condition to their child can be higher in cases related to a genetic condition.

For example, a parent with 22q11 deletion syndrome (DiGeorge syndrome) has a 1 in 2 chance of passing the condition to their child.