March of the penguin: Aquatic flightless bird with a deadly degenerative foot condition receives orthopedic rubber boots to help him walk around the San Diego Zoo

A penguin that once had issues walking because of degenerative foot condition is now strutting around the San Diego Zoo after being fitted with a new pair of orthopedic rubber boots.

The aquatic flightless bird, named Lucas, developed what is known as bumblefoot that caused lesions on his feet and would have led to sepsis and death if left untreated.

In a race against time, zoo staff turned to Thera-Paw, an organization that creates rehabilitative and assistive products for animals with special needs, which designed custom shoes made of neoprene and rubber to prevent pressure sores from developing when Lucas stands and walks.

Lucas’ gait has improved since wearing the small, black boots, along with his ability to navigate through the rocky habitat and his posture is more natural that provides him with better balance. 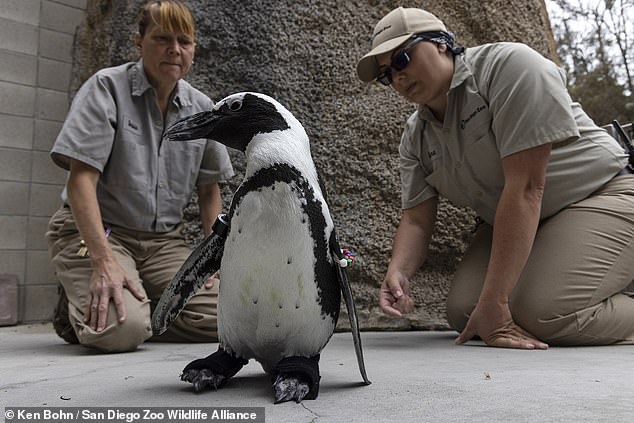 Lucas was diagnosed with a degenerative foot condition three years ago that caused sores on his feet. Now, the penguin can move around without pain thanks to a new pair of rubber boots

Lucas is part of the San Diego Zoo’s African penguin colony, which are native to the waters and shorelines of southern Africa.

The species is currently listed as endangered due to a variety of threats, including oil spills, climate change and a lack of food from humans overfishing their habitats.

But a colony is living well in the California zoo – and Lucas especially.

Dr Beth Bicknese, senior veterinarian at the San Diego Zoo, said in a statement: ‘I’ve known Lucas for a long time, so having the ability to provide him with a chance to live a normal life brings a smile to my face. 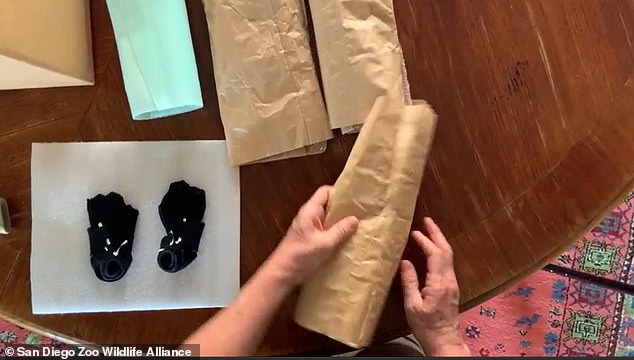 The boots were custom designed for the penguin. The shoes slide on his feet and strap around his ankles 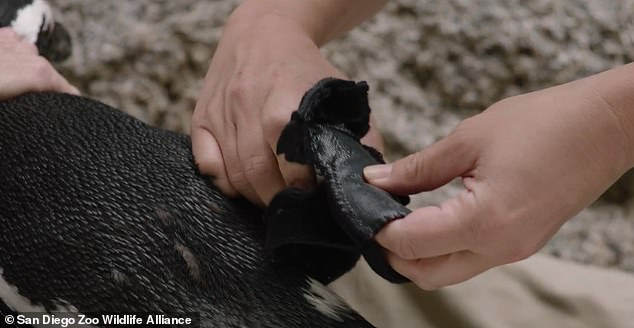 Lucas has been in pain for three years, but now he has the boots to take the pressure off the sores on his feet

‘The boots are cushioned and Velcroed in place, so they will help Lucas to fully participate in the colony and showcase behaviors that are more typical for a penguin—such as climbing the rocks, swimming, nesting and finding a suitable mate.’

The penguin was diagnosed with bumblefoot about three years ago, which led to him developing a spinal infection that weakened his leg muscles and hindered his ability to stand upright on his toes.

Lucas was forced to rest on areas of his ankles that would not normally touch the ground. The team provided Lucas with pain medication, physical therapy and acupuncture treatments to try to improve his spine, but were unable to heal his condition. 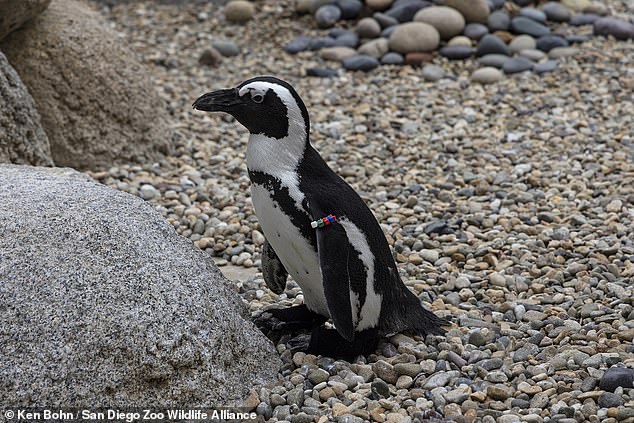 The orthopedic boots, however, have given Lucas a new lease on life and is allowing him to once again roam the penguin habitat.

Ilaria Borghese, founder and president of Thera-Paw, said in a statement: ‘This was such an amazing opportunity, and we were honored to be asked to assist the team at the San Diego Zoo.

‘Over the years, we’ve tackled challenging cases like Lucas’s, and each is special and memorable.

‘One thing that never gets old is seeing an animal’s life dramatically improve after using one of our aids. It inspires and drives us every day.’

African penguins are covered in the same black, white and gray waterproof feathers as those living in the Arctic, but this species prefers much warmer waters around Africa. 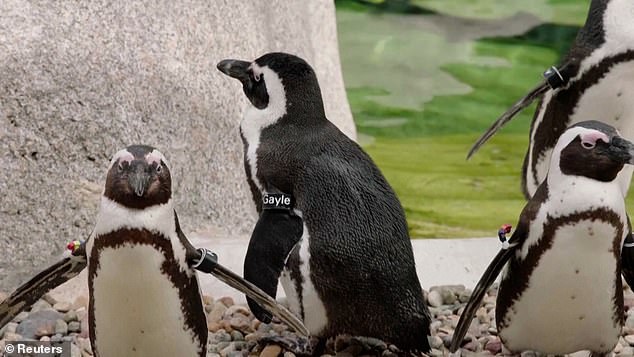 They can also be determined by a number of dot-like markings across their white chests.

African penguins can be found in large colonies along the southwestern rocky coast of Africa from Namibia to Port Elizabeth, and many of the surrounding islands. The largest colony is located on Dyer Island.

However, these flightless birds are declining in numbers.

‘While breeding pairs may have numbered in the millions in the early 20th century, less than 42,000 individuals remain today,’ according to a statement from the San Diego Zoo.

‘Habitat loss, over-fishing, and coastal development are taking a toll.

‘The African penguins at the Zoo are just the beginning of a large flock that we hope to have over the next couple of years. It is important for people to learn about this endearing penguin.’