Housing estates of the future? Plans are unveiled for a 3D-PRINTED community of 100 homes that would be the biggest development of its kind in the US

Plans have been unveiled for a 3D-printed community of 100 new homes in the Austin area, Texas — which would become the largest development of its kind in the United States to date when construction begins next year.

The project is the result of a collaboration between real estate and homebuilding firm Lennar and ICON, a construction engineering company specialising in the development of large-scale 3D-printing technology.

They are joined by the architectural firm BIG-Bjarke Ingels Group, who will be designing the houses which will be produced using so-called ‘additive manufacturing’ — in which objects are printed up one single layer at a time.

According to ICON, their ‘Vulcan construction system’ can produce resilient, energy-efficient homes both faster and with less waste than conventional building approaches, while also offering more freedom of design.

Buildings and other structures can be built as large as 3,000 square feet using the system, they added. 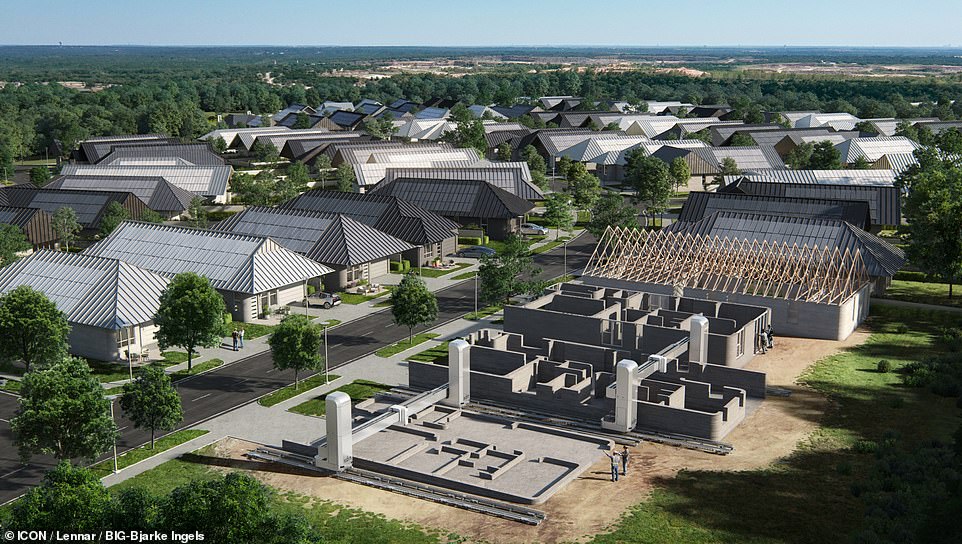 Plans have been unveiled for a 3D-printed community of 100 new homes in the Austin area, Texas — which would become the largest development of its kind in the United States to date when construction begins next year. Pictured: an artist’s impression of the neighbourhood, showing houses being slowly printed layer-by-layer in the foreground 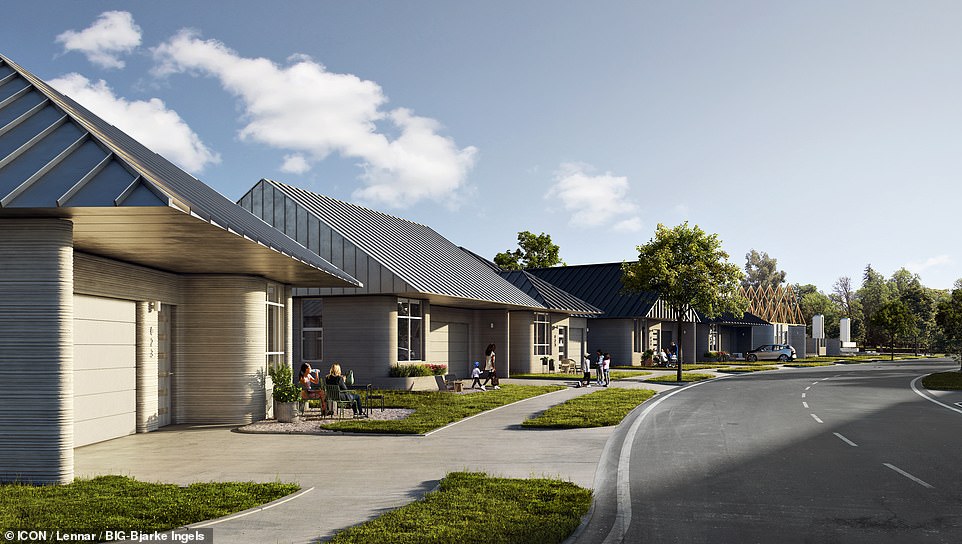 The project is the result of a collaboration between real estate and homebuilding firm Lennar and ICON, a construction engineering company specialising in the development of large-scale 3D-printing technology. Pictured: an artist’s impression of the 3D-printed neighbourhood, which is to be located in the Austin area of Texas

‘Construction-scale 3D printing not only delivers higher-quality homes faster and more affordably, but fleets of printers can change the way that entire communities are built for the better,’ said ICON CEO Jason Ballard, who said that he founded the firm as a response to the global housing crisis.

‘The US faces a deficit of approximately 5 million new homes, so there is a profound need to swiftly increase supply without compromising quality, beauty, or sustainability and that is exactly the strength of our technology.’

‘It is an honour and a huge milestone for ICON to partner with Lennar, an elite top-tier homebuilder with a commitment to innovation. We believe this will be a watershed moment in the history of community-scale development and the future breaking into the present,’ he concluded.

‘Labour and material shortages are two of the biggest factors pushing the dream of home ownership out of reach for many American families,’ added Eric Feder, who is president of Lennar subsidiary LENX.

‘Lennar has always expanded the boundaries of technological innovation to keep quality homes affordable and 3D printing is an immensely encouraging approach.

‘We are excited to collaborate with ICON to develop solutions to emerging challenges in the coming years.’ 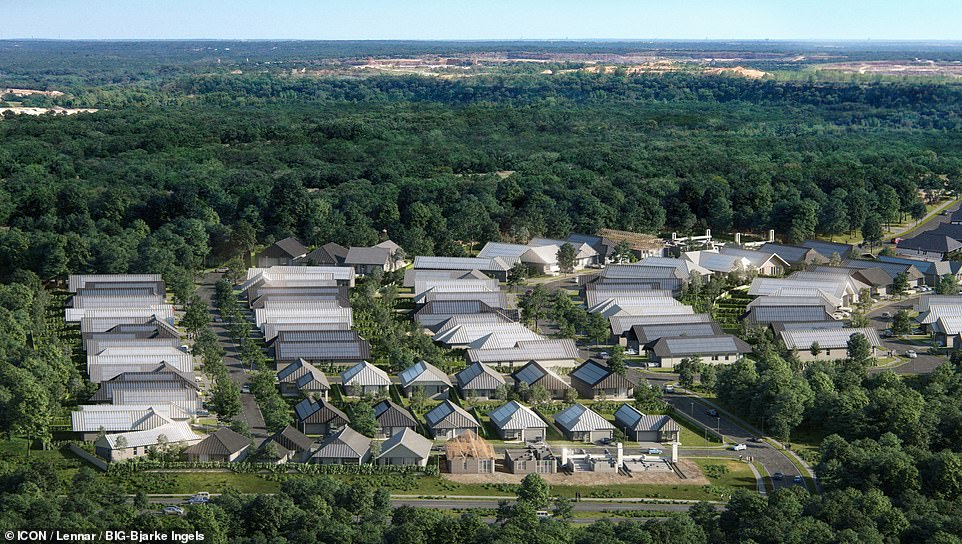 According to ICON, their ‘Vulcan construction system’ can produce resilient, energy-efficient homes both faster and with less waste than conventional building approaches, while also offering more freedom of design. Pictured: an artist’s impression of what the Austin-based neighbourhood could look like. Four homes still being printed can be seen in the foreground

‘Additive manufacturing has the potential to revolutionize the built environment as it gets adopted by the industry at scale,’ said BIG-Bjarke Ingels Group partner Martin Voelkle.

‘By partnering with ICON and Lennar, we are able to see this new technology roll out to the widest possible audience,’ he added.

‘The 3D-printed architecture and the photovoltaic roofs are innovations that are significant steps towards reducing waste in the construction process, as well as towards making our homes more resilient, sustainable and energy self-sufficient.’

Today’s announcement of the new housing project is said to represent a deepening of the relationship between Lennar and ICON which began with the former investing $207 million (£150 million) in the latter.

3D-printe, a, for, plans, unveiled
You may also like: