Playlist for dogs calms their nerves amid firework displays

Pawfect for Bonfire Night! Experts create a playlist for DOGS to calm their nerves around firework displays

After taking down the Halloween pumpkins, many of us look forward to the next big autumn celebration – Bonfire Night.

But the same cannot be said for our dogs, where the loud bangs of fireworks can seem scary and stressful.

In fact, according to The Kennel Club, 34 per cent more dogs went missing in the two weeks around Bonfire Night and Diwali in 2021 compared to the following two weeks.

Fortunately, experts at the canine organisation have created a Spotify playlist that will help desensitise our pets to firework displays, which you can access here.

It is nearly an hour-and-a-half’s worth of cracks, whizzes and bangs from fireworks, and is intended to be played periodically to our pooches leading up to November 5.

The Kennel Club said: ‘Start on a very low volume for a short amount of time and slowly build up to avoid causing your dog any distress.

‘If your dog does start showing signs of distress, stop immediately, and seek help from a qualified trainer or behaviourist.’ 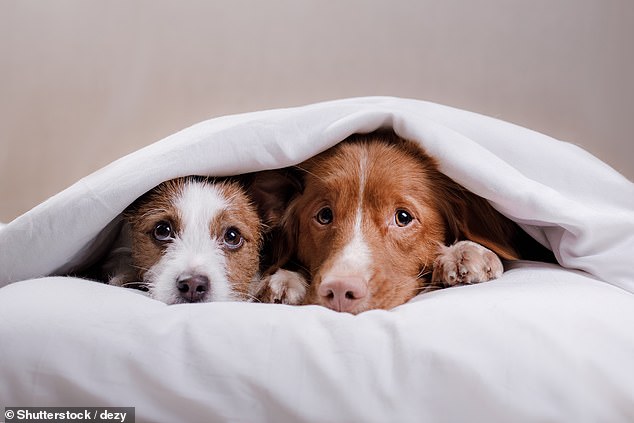 Twenty per cent of owners noticed their pet displaying sings of stress, such as pacing, howling or excessive panting. A third has seen their dog shiver and tremble during firework displays, while more than a quarter mention unusual excessive barking (stock image)

WAYS TO RELAX YOUR DOG DURING BONFIRE NIGHT

This year, celebrations for the festival of Diwali, which is accompanied by numerous fireworks displays, took place from October 22 to October 26.

This is within two weeks on Bonfire Night, which again, traditionally involves lighting fireworks.

It makes the fortnight a very difficult time for dogs and other pets, causing some to escape or run away.

While the playlist will do well to prepare them for the noises of fireworks, it is not the only element that can trigger fear.

The vibrations, flashing lights and the strong smells in the air may not seem scary to humans, but can be confusing and stressful for animals.

Therefore it may be necessary to make other efforts to keep your dog calm on Saturday night.

The Kennel Club recommends making a safe space for them to go, with blankets and their favourite toys, and try to drown out the sounds with the TV or radio.

Closing the curtains will also block any scary flashes of light and reduce the noise level of fireworks.

Owners should also try and feed their dog early in the evening in case they become too nervous to eat later on, and walk them before dusk to avoid being outside when a display begins.

Prior to Bonfire Night, it is a good idea to ensure your garden is escape-proof in case your pet gets spooked by a bang and tries to run away, as well as check their microchip details are up to date in case they succeed.

A survey commissioned by The Kennel Club revealed that nearly half of owners say their dog is scared by fireworks.

Twenty per cent of owners noticed their pet displaying sings of stress, such as pacing, howling or excessive panting.

A third have seen their dog shiver and tremble during firework displays, while more than a quarter mention unusual excessive barking.

As a result of the ongoing negative impacts of unregulated fireworks on the nation’s pets, The Kennel Club is urging the UK Government to conduct a review of legislation.

It is campaigning for MPs to restrict the lighting of fireworks to licensed events only, and lower the maximum decibel limit of displays.

The organisation is also recommending the introduction of a fixed penalty notice system for the misuse of fireworks, all to help reduce harm caused to animals and vulnerable groups.

Mark Beazley, Chief Executive at The Kennel Club said: ‘The element of surprise is one of the key factors in what makes fireworks uniquely distressing for dogs.

‘If owners can anticipate fireworks, they can manage this distress in a way that works for their dog, and we’re asking Government to recognise this and review legislation, for the sake of the nation’s pets.

‘Our statistics sadly show that there really are devastating and long-term consequences when fireworks strike dogs with a sense of terror unexpectedly, with thousands of dogs running away, behaving out of character and showing clear signs of fear and distress every year.

‘Whilst we urge Government to consider our recommendations to protect dog welfare, we are also urging caution from owners this fireworks season.

‘Each dog reacts differently and it is important that owners know what do to and how they can help their four-legged friend and keep them safe.’

HOW DO FIREWORKS WORK?

Metal salts are packed into a firework as pea to plum sized pellets called stars.

As the fuse reaches the core of the firework, it explodes.

The heat given off by the combustion reaction causes electrons in the metal atoms to be excited to higher energy levels.

Different metals will have a different energy gap between their ground and excited states, leading to the emission of different colours.

John Conkling, a professor of chemistry at Washington College, recently demonstrated the science behind fireworks in a video for the non-profit American Chemical Society.

‘Without chemistry, you couldn’t have the burning mixtures.

‘Without the burning mixtures, you wouldn’t have fireworks,’ Conkling said.