Prehistoric HUNTING PITS discovered at Stonehenge: Thousands of holes were dug by hunter-gatherers to catch deer and wild boar 10,000 years ago

Thousands of prehistoric hunting pits that are believed to have been used to catch deer and wild boar have been unearthed near Stonehenge.

Archaeologists think they were dug by hunter-gatherers 10,000 years ago — about 5,000 years before the UNESCO World Heritage site was built.

The discovery shows ancient humans roamed the landscape during the early Mesolithic period, researchers say, when Britain was re-inhabited after the last Ice Age.

The pits date from between 8,200 BCE and 7,800 BCE and were uncovered by University of Birmingham and Ghent University researchers using a combination of novel geophysics and ‘traditional’ archaeology. 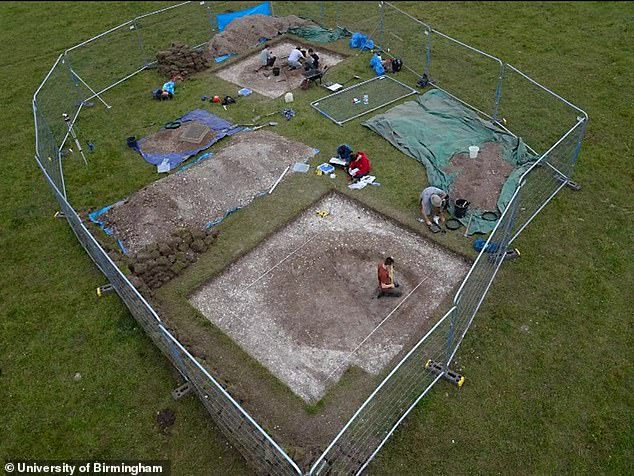 Discovery: Thousands of prehistoric hunting pits that are believed to have been used to catch deer and wild boar have been unearthed near Stonehenge 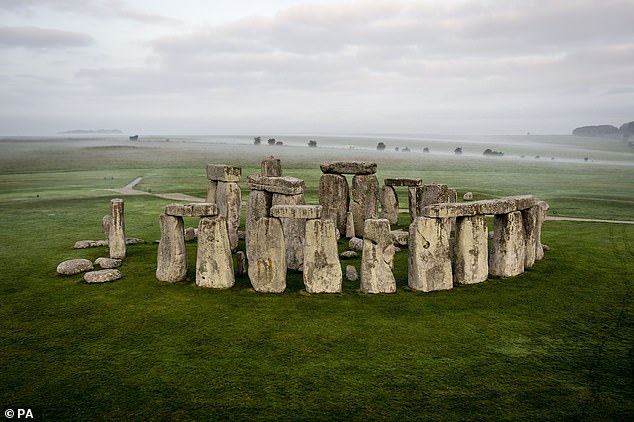 The discovery shows ancient humans roamed the Stonehenge landscape during the early Mesolithic period, researchers say, when Britain was re-inhabited after the last Ice Age

Stonehenge was built thousands of years before machinery was invented.

The heavy rocks weigh upwards of several tonnes each.

Some of the stones are believed to have originated from a quarry in Wales, some 140 miles (225km) away from the Wiltshire monument.

To do this would have required a high degree of ingenuity, and experts believe the ancient engineers used a pulley system over a shifting conveyor-belt of logs.

Historians now think that the ring of stones was built in several different stages, with the first completed around 5,000 years ago by Neolithic Britons who used primitive tools, possibly made from deer antlers.

After the Neolithic Britons – likely natives of the British Isles – started the construction, it was continued centuries later by their descendants.

Over time, the descendants developed a more communal way of life and better tools which helped in the erection of the stones.

Bones, tools and other artefacts found on the site seem to support this hypothesis.

A technique known as electromagnetic induction survey, which uses the electrical conductivity of soil to provide information that can be used to find materials underground, helped experts make the discovery.

The University of Birmingham said it was the first time one had been used on the Stonehenge landscape.

It led to the identification of more than 400 potential large pits — each over 8.2ft (2.5m) in diameter — of which, six were excavated during the course of the project.

The researchers said that while each of these sites adds to our knowledge of prehistoric activity in the Stonehenge landscape, the Mesolithic pit stands out as exceptional.

The size and shape of the pit suggest it was probably dug as a hunting trap for large game such as aurochs, red deer and wild boar, they added.

Paul Garwood, senior lecturer in prehistory at the University of Birmingham, said: ‘What we’re seeing is not a snapshot of one moment in time.

‘The traces we see in our data span millennia, as indicated by the seven-thousand-year timeframe between the oldest and most recent prehistoric pits we’ve excavated.

‘From early Holocene hunter-gatherers to later Bronze Age inhabitants of farms and field systems, the archaeology we’re detecting is the result of complex and ever-changing occupation of the landscape.’

‘The maps we create offer a high-resolution view of subsurface soil variation that can be targeted with unprecedented precision.’

From 2017, the team carried out excavations to evaluate just how accurate the results of the geophysical survey mapping and interpretation had been.

These samples provided information for developing a model of types of archaeological evidence revealed in the geophysical data, resulting in computer-generated maps of traces of prehistoric activity.

Dr Nick Snashall, an archaeologist for the Stonehenge & Avebury World Heritage Site, said: ‘By combining new geophysical survey techniques with coring, and pin point excavation, the team has revealed some of the earliest evidence of human activity yet unearthed in the Stonehenge landscape.

‘The discovery of the largest known Early Mesolithic pit in north-west Europe shows that this was a special place for hunter-gatherer communities thousands of years before the first stones were erected.’

Last month a new study found that red deer, elk and wild boar would have roamed the Stonehenge area 4,000 years before the stones were constructed.

University of Southampton researchers examined a nearby Mesolithic site and found the area was not a forest as previously thought, but instead would probably have been populated by grazing animals and hunter-gatherers.

The new study has been published in the Journal of Archaeological Science.