Spain’s Stonehenge revealed: Prehistoric circle of 150 stones 2,000 years older than Britain’s famed monument emerges from the depths of a reservoir after drought causes water to drop to a quarter of its usual level

A prehistoric circle of 150 standing stones dubbed the Spanish Stonehenge has re-emerged from a reservoir for the only the fifth time since its discovery after the worst drought in 60 years left the waterbody at a quarter of its usual level.

The Dolmen of Guadalperal, a circle of granite stones dating from 5,000 BC, in the Valdecañas Reservoir in central Spain has only been seen four times since it was discovered in 1924. Nearly 20 years later, in 1963, the valley was deliberately flooded on the order of the Spanish dictator Franco, only emerging at periods of intense drought in the following years.

The stones, which are at least 2,000 years older than Stonehenge in England, have wavy details that are believed to represent the nearby Tagus River. Some theories suggest the prehistoric structure was either used as a solar temple or laid over tombs when it was built by Celtic people 7,000 years ago.

It is not as famous as Stonehenge in England, but the theories to their purposes are similar – the monument in Wiltshire is also thought to serve as an ancient solar calendar.

The Spanish Stonehenge stones could disappear completely if they endure another prolonged submersion because the granite rocks are prone to erosion. 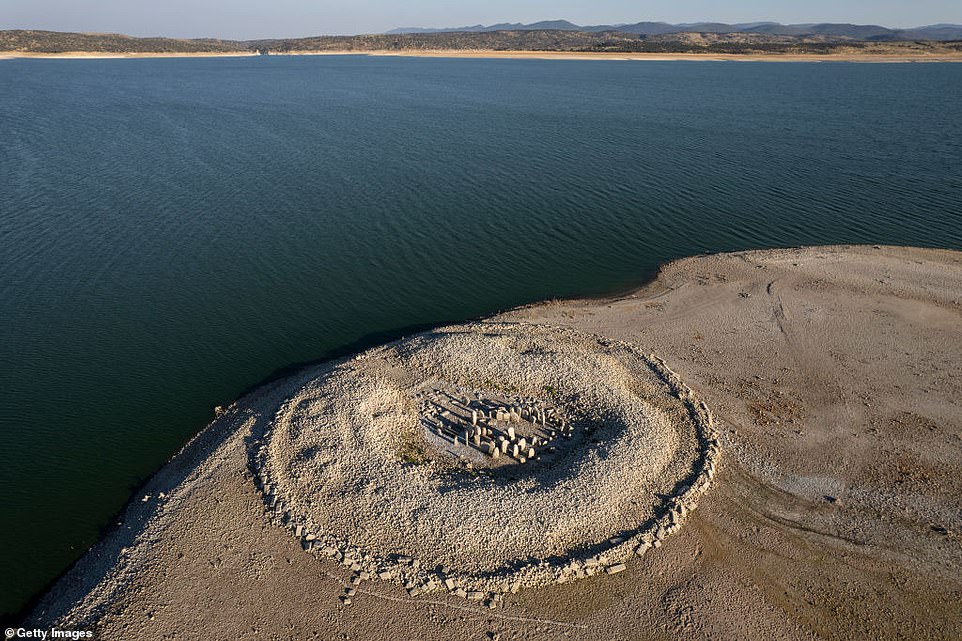 The Dolmen of Guadalperal, a circle of granite stones dating from 5,000 BC, in Spain’s Valdecañas Reservoir has re-emerged for the only the fifth time since its discovery after the worst drought in 60 years left the waterbody at a quarter of its usual level 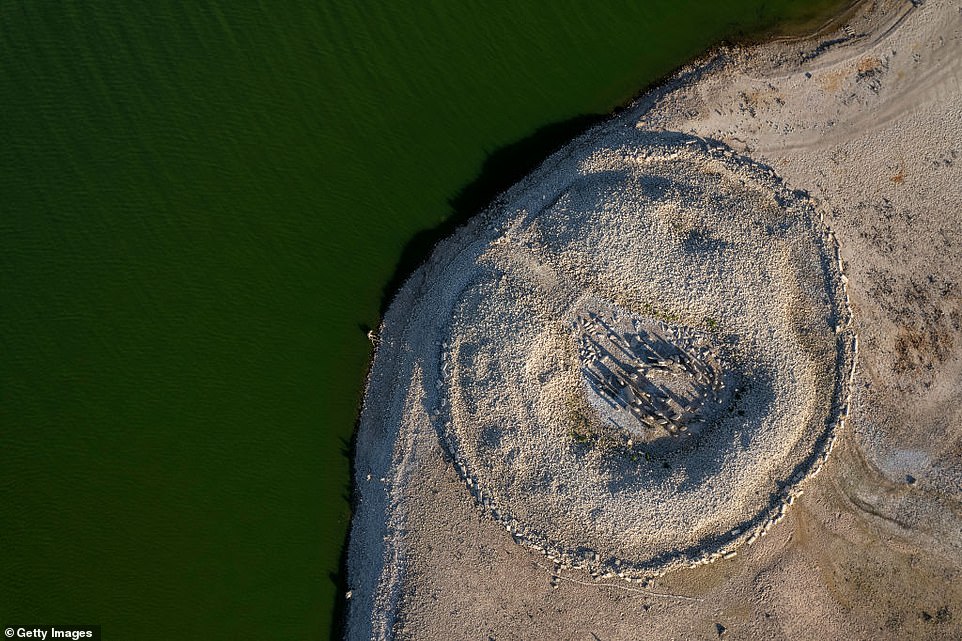 The standing granite stones – some as tall as 6ft – were discovered in 1924. Nearly 20 years later, in 1963, the valley was deliberately flooded on the order of the Spanish dictator Franco, only emerging at periods of intense drought in the following years 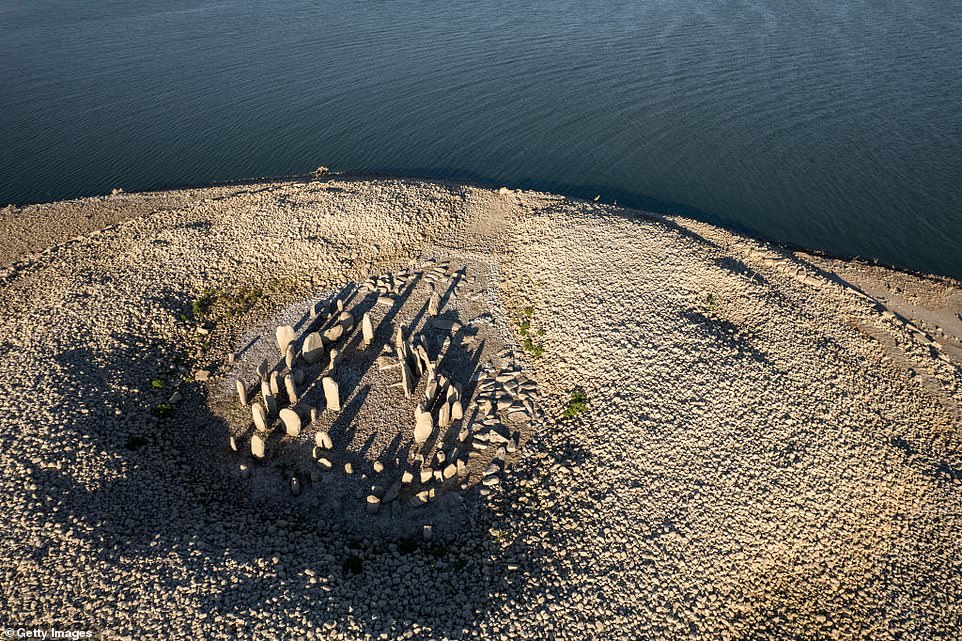 Similar to Stonehenge in England, theories suggest the so-called Spanish Stonehenge was used as a solar temple or laid over tombs when it was built by Celtic people more than 7,000 years ago 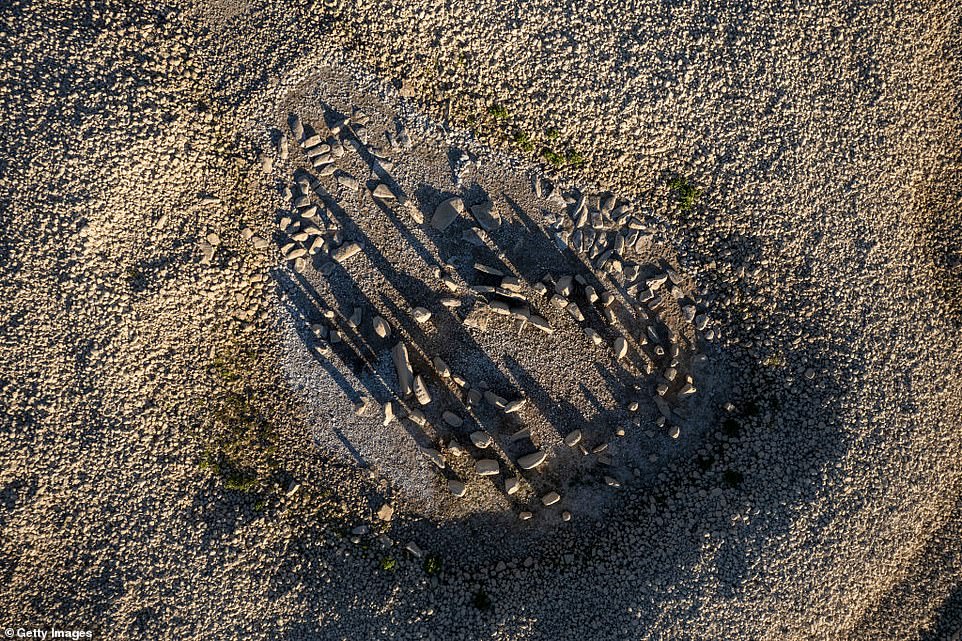 Archaeologists fear the stones could disappear completely if they endure another prolonged submersion, because the granite rocks are prone to erosion 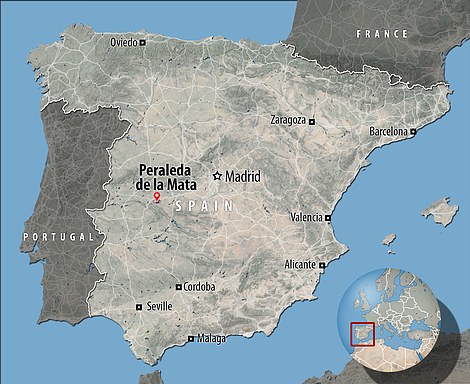 The site was thought to be condemned to the history books in the 1960s when a Spanish general ordered the construction of a hydroelectric dam in Peraleda de la Mata, near Cáceres in Extremadura

Ángel Castaño, president of the Peraleda Cultural Association, recently started a petition to move the prehistoric monument out of its watery location and to somewhere it will survive.

The monoliths are already showing significant signs of wear, Castaño said in 2019 when the stones were last above water, and if they are not saved now, it may be too late.

Not much is known about Spanish Stonehenge because it typically sits at the bottom of the 14,108 square-mile deep reservoir, however the recent rise of the stones could let archeologists finally unravel its ancient secrets.

‘It’s a surprise, it’s a rare opportunity to be able to access it,’ said archaeologist Enrique Cedillo from Madrid’s Complutense University, one of the experts racing to study the circle before it gets submerged again.

The site was discovered by Hugo Obermaier, a German priest and amateur archaeologist, in 1925.

In 1963, Francisco Franco Bahamonde, who ruled over Spain from 1939 to 1975, ordered the valley boarding the Tagus river to be flooded and this area included the stone circle.

But before its rediscovery and subsequent demise, it is thought the stones would have centered around a central chamber for sun worship.

Although there are many scattered across Western Europe, little is known about who erected them. Human remains found in or near many have led to an often-cited theory that they are tombs.

Local historical and tourism associations have advocated moving the Guadalperal stones to a museum or elsewhere on dry land.

Their presence is also good news for Ruben Argentas, who owns a small boat tours business. ‘The dolmen emerges and the dolmen tourism begins,’ he told Reuters after a busy day spent shuttling tourists to the site and back.

However, more than 80,000 tourists flock to England’s Stonehenge each year to see a circle of enormous rocks that are up to 30 feet high, dwarfing the six-foot tall single monoliths uncovered in Spain. 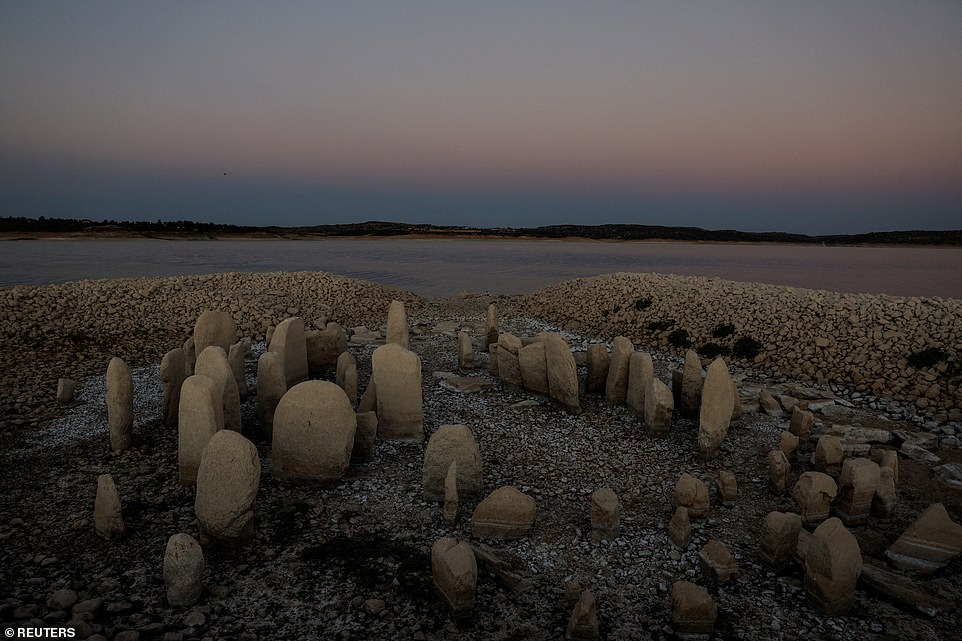 The stones have wavy details that are believed to represent the nearby Tagus River, which is the longest river in the Iberian Peninsula 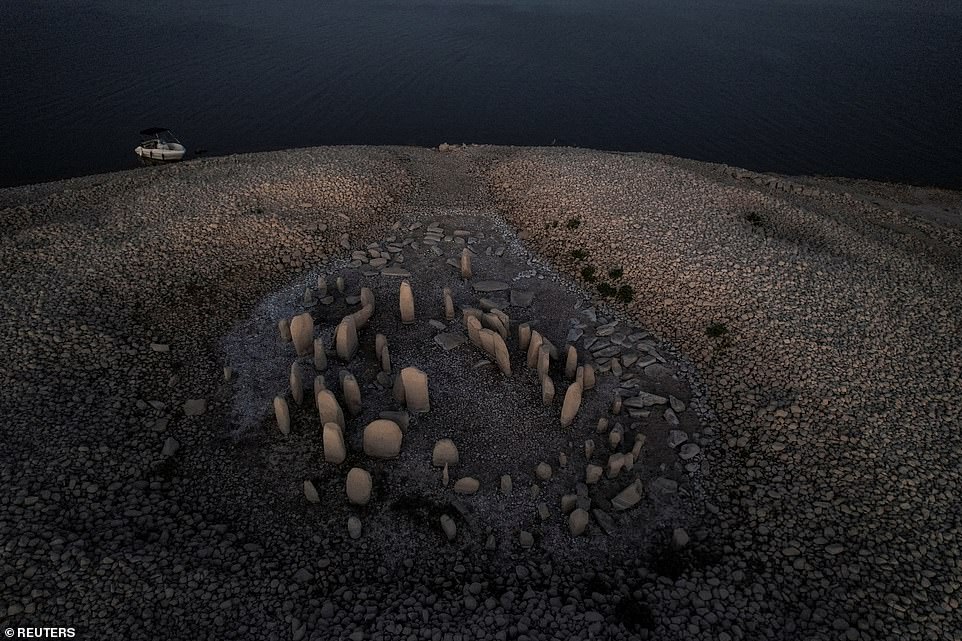 Spain’s circle is made up of 150 granite  stones, with some standing six feet tall. Experts fear another prolonged submersion could destroy the prehistoric monument 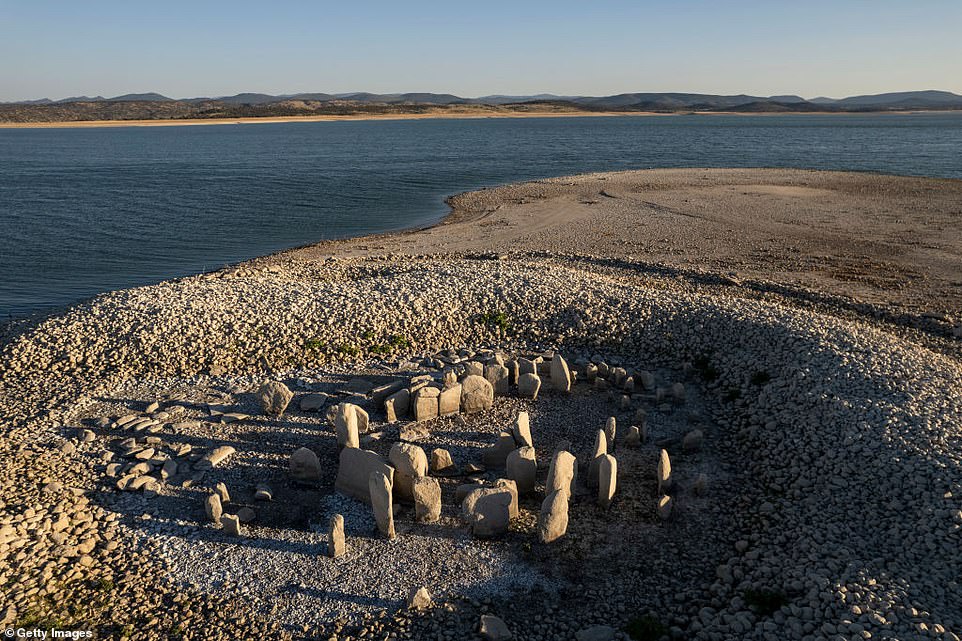 Radiocarbon dating of the rocks found they range in age from around 7,000 years old, which is about 2,000 years older than Stonehenge

There are more stones at the Spanish site. Stonehenge has only has 93.

However, Stonehenge’s monument covers 10,800 square feet, making it a far bigger area than the Spanish site that is only 16 feet in diameter.

Radiocarbon dating of the rocks found they range in age from around 7,000 years old, which is about 2,000 years older than Stonehenge.

It is widely accepted Stonehenge’s bluestones were quarried from Preseli Hills in Wales and moved to the current location, but how the idea for Stonehenge arrived on British shores remains a mystery.

Archaeologists have uncovered Roman remains at Dolmen of Guadalperal, along with other artifacts like coins, ceramic fragments and a grinding stone, along with an entire settlement nearby.

Although the structure was used for religious purposes, experts say it also had an economic purpose by acting as a trading hub.

There are hundreds of stone circles similar to Stonehenge in other European countries.

To erect a just one of the massive stones, people had to dig a large hole with a sloping side. The back of the hole was lined with a row of wooden stakes. The stone was then moved into position and pulled to the upright position using plant fiber ropes and likely a wooden frame for support. 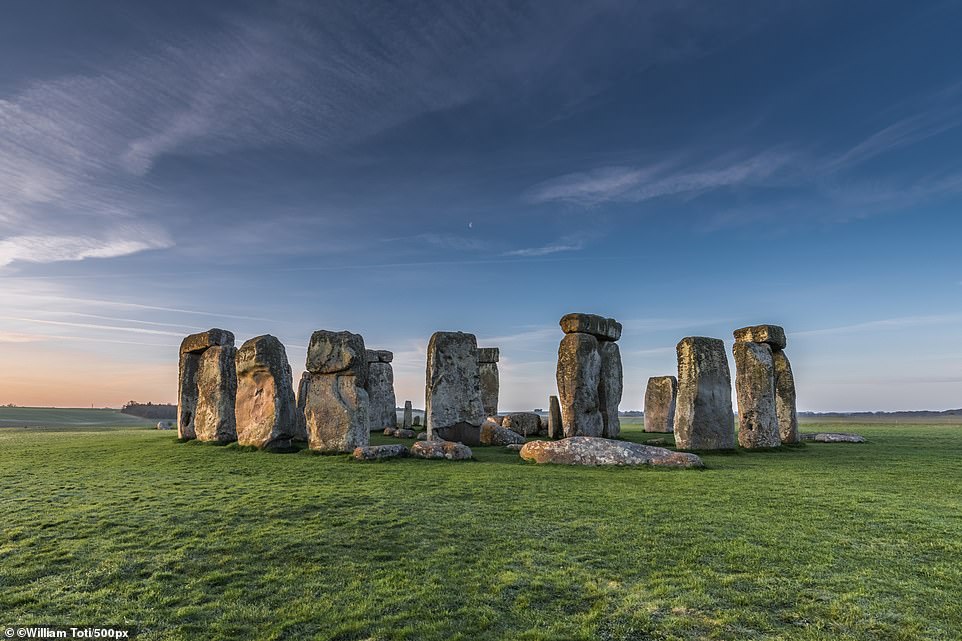 Spain’s Stonehenge is not as famous as the monument in England (pictured), but the theories to their purposes are similar -the are both believed to have served as ancient solar calendars 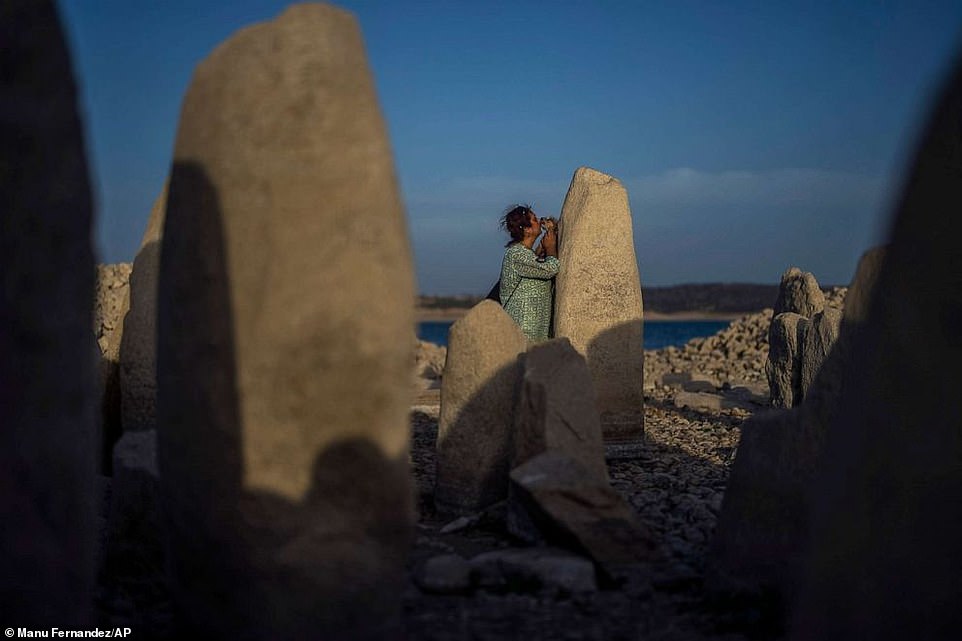 The recent appearance allows visitors and researchers to get up close to the stones. Archaeologists hope to learn more about who built the structure and why