The RAF has set a new Guinness World Record after completing the first ever flight using a fully synthetic aircraft fuel.

The synthetic version of UL91 fuel is made by London-based Zero Petroleum using hydrogen extracted from water, and carbon extracted from carbon dioxide in the atmosphere.

The process makes use of only fully renewable energy sources to extract the chemicals required to synthesise the fuel, according to the Ministry of Defence.

A spokesperson said the technique can be used to create ‘drop-in fuels’, which can replace fossil-based aviation fuels with no engine modification. 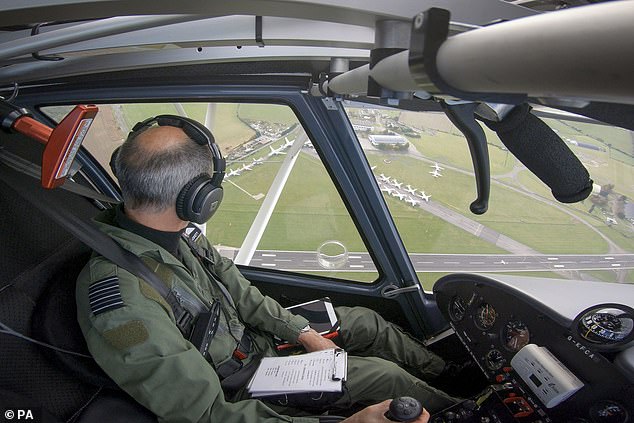 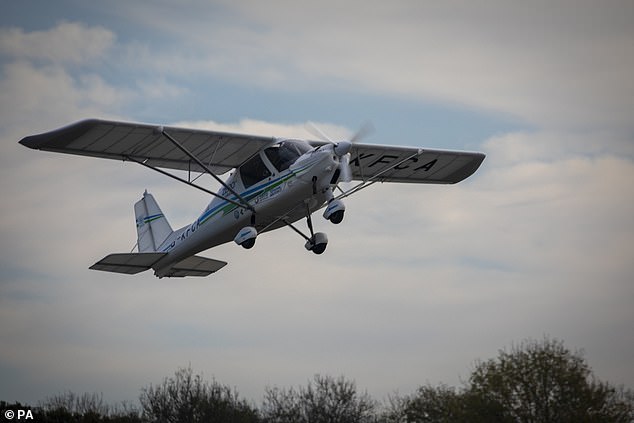 It forms part of Project MARTIN, an RAF initiative aimed at saving 80-90 per cent of carbon per flight, supporting the RAF’s vision that synthetic fuels will have a major role in powering the fast jets of the future.

While electric and hydrogen power sources are considered viable for some RAF aircraft, liquid fuel is still required for high-performance planes.

Minister for defence procurement, Jeremy Quin, described it as a ‘world first innovation’ for the UK armed forces.

‘Whilst green technologies like electric and hydrogen power generation are viable for many RAF platforms, high-performance aircraft require a liquid fuel alternative, like the UL91, to maintain operational capabilities,’ he added.

‘This is the first innovation of many, with a range of research and development activities underway to consider the viability of synthetic fuels without compromising aircraft performance.’

Paddy Lowe, chief executive of Zero Petroleum, said it was a unique project with the Royal Air Force. 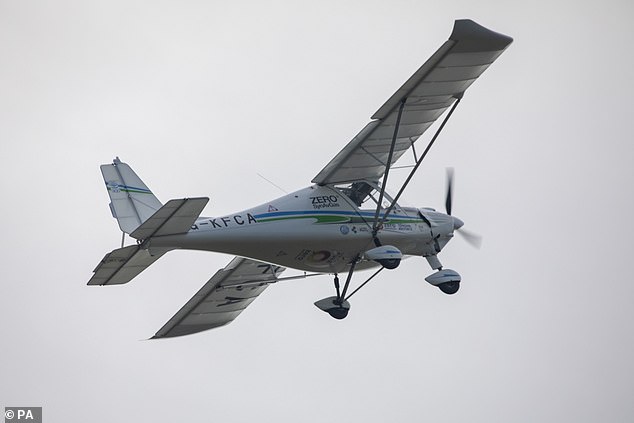 The flight was in an Ikarus C42 aircraft from Cotswold Airport using UL91 fuel, which is made using hydrogen extracted from water, and carbon extracted from carbon dioxide in the atmosphere

Synthetic fuels are made using renewable power sources including wind and solar energy.

They are then created using efficient industrial processes such as carbon capture, electrolysis and thermal reactions.

The raw materials are just air and water, from which the ingredients of aviation fuel are extracted.

Carbon dioxide is extracted from the atmosphere and hydrogen from water.

These are the five manufacturing steps:

Adding it ‘demonstrates the validity of our synthetic fuel and the potential it has to eliminate fossil CO2 emissions from a number of difficult but critical sectors, including transport, which currently accounts for 23% of the global total.

The breakthrough in synthetic fuel ‘underscores the solution-based approach’ to addressing climate change supported by the MoD, a spokesperson said.

This is backed by £6.6 billion being set aside for research and development out of the £24 billion defence settlement.

Working towards the Government’s Net Zero by 2050 goal, the RAF plans for their first Net Zero airbase by 2025, and goal of a Net Zero force by 2040.

‘I am determined to tackle this head on and have set the Royal Air Force the ambitious goal to be Net Zero by 2040.

‘The way we power our aircraft will be a big part of achieving that goal, and this exciting project to make aviation fuel from air and water shows how it might be done.

‘I am delighted at the award of this world record and to see the Royal Air Force yet again at the leading edge of innovation and technology.’

Before this first RAF flight, the fuel had been extensively tested, finding the engines performed as if it were running fossil fuel but ran at a lower temperature.

This means using synthetic fuel could also increase engine lifespan as well as a significant carbon saving, the RAF explained.

A spokesperson for Guinness World Records congratulated the RAF and Zero Petroleum, describing the flight as a ‘great achievement’.

Royal Air Force is testing self-driving CARS: Autonomous vehicle capable of 60mph will deliver supplies around a base in Oxfordshire to ‘free up personnel from mundane tasks’

The Royal Air Force is testing its own autonomous vehicle to deliver supplies around a base in Oxfordshire to ‘free up personnel from mundane tasks’.

Its specially-designed self-driving car, called Kar-Go, is a zero-emissions delivery vehicle capable of travelling at speeds of up to 60 miles/hour.

It’s been zipping around the Royal Air Force base of Brize Norton in Oxfordshire, delivering tools, equipment and supplies to personnel as part of a trial.

When arriving at its destination on the base, RAF personnel meet Kar-Go and a hatch is automatically released enabling them to collect the cargo.

Slightly odd in appearance, Kar-Go looks a bit like a gigantic green computer mouse with protruding wheels, complete with flashing lights and a spacious boot.

Death of 200 birds falling over hospital ‘like rain’ sparks investigation